Read My Kind of Girl Online 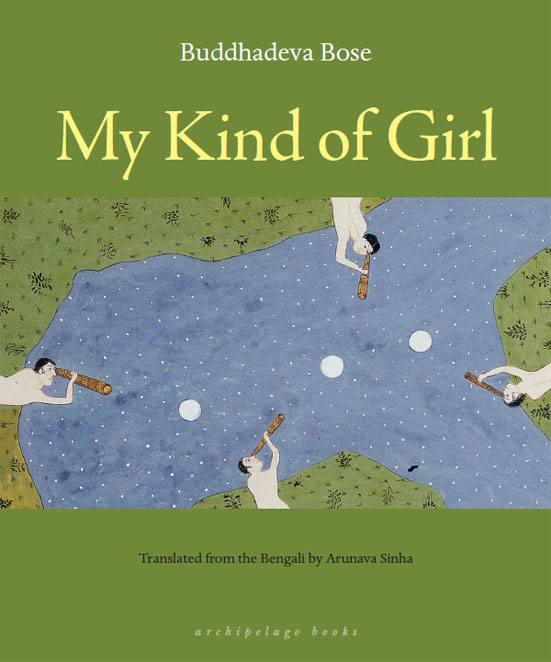 Translated from the Bengali by Arunava Sinha

All rights reserved. No part of this book may be reproduced or retransmitted in
any form without prior written permission of the publisher.

This publication was made possible by the generous support of
Lannan Foundation, The National Endowment for the Arts,
and the New York State Council on the Arts, a state agency.

A bitingly cold night in December. Four passengers sat silently in the first-class waiting room of Tundla station. All four were covered from head to toe, concealed by their overcoats, but even in the dim light of that stark, dispassionate room, built and decorated in accordance with the Indian Railway's precise specifications, it was obvious that they were very different individuals, thrown together from different corners of society.

The one in the easy chair had an enormously â even indecently â powerful body, as though he were a giant beast, the kind that outgrows its clothes and shoes at sixteen, to the amazement of its parents. His face was large too, almost as big as a jackfruit, and longish, and on the broad expanse of his cheeks â perhaps because his pores were swollen from the cold â the seeds of next morning's beard were already sprouting in blue dots.

The second one was a nicely proportioned, pleasant looking man, dapper, well-groomed, immaculate in his western garb; complete with hat, cane and gloves. His face was round, plump, grave, his complexion just the shade of dark that makes good-looking men even better looking; his hair, though plentiful and black, betrayed the occasional flash of silver. His lips were neither too full nor too thin but clearly etched, the kind used to commanding with a few words. Anyone who had set eyes on him would have agreed that rules were never flouted in his disciplined, predictable life, that he never had to raise his voice.

This natural authority in the way he occupied the waiting room chair, legs elegantly crossed, this stateliness, this majestic quality, was also visible in the third person. He was on the stouter side, and of an old-fashioned, aristocratic appearance: hair parted in the middle, ruddy of cheek, with a rakish moustache that suited him perfectly.

But the fourth: he was the antithesis of all this elegance. Slight in build, he was seated in one corner, his feet up on a chair â although a second easy chair was vacant â but there was no sense of repose in the way he reclined. He kept fidgeting but seemed unable to find a comfortable position, and even when he closed his eyes occasionally, furrows appeared on his brow, as though he was thinking of something important and as though volatility of thought was his wont. At first glance he appeared very young; perhaps he was the youngest of the four, but when the light shone on the lower half of his face, you no longer mistook him for a young man.

These four travelers had met earlier that day: in the gardens of the Taj Mahal, on the steps of Sikandra, and again leaving Agra. They had
conversed, all in the same compartment, on the train. These exchanges had revealed that the powerfully built man was a contractor; he had been to Delhi to secure a government order, visiting Agra on his way back, and wanted to stop at Varanasi too. The second one was an old, trusted bureaucrat in Delhi, currently in a very high post in the military and off to Allahabad on vital government work, thereafter to Lucknow Cantonment. The third man was one of the better-known doctors in Calcutta, Dr. Dhar; having delivered a lecture on diphtheria at a medical conference in Delhi, he was now on his way back to tend to his patients. And the fourth was in this part of India simply on holiday; he hadn't decided yet whether to return directly to Calcutta or to stop off somewhere along the way. His profession was not clear either; he said he wrote books, but did writing count as a profession? That he was involved with books was clear, though, for after the conversation ended, the huge tome he opened seemed, in its form and appearance â so the other three felt â completely unsuitable for casual reading on a train. Whether it was readable at all was suspect.

The bad news had come at Tundla. A cargo train had been derailed near Aligarh, no trains were running. How long? Well, it would take at least four or five hours for the lines to be cleared. In other words, no hope tonight? Didn't look like it. The bureaucrat had important work, he had inquired about flight schedules â the first flight out was at nine thirty, and yes, he would be able to take a train back to Agra in a bit. The doctor had tried to accept the situation philosophically, but the contractor had kept breathing deeply and muttering, “So cold . . . and now!” This despite the fact that both his physique and his clothing
were designed to insulate him admirably from plunging temperatures. But the bookish gentleman, the thin one, had been feeling cold indeed; he rubbed his hands together, walked up and down, and then turned around to inform the other three, unnecessarily, that there was no choice but to spend the night in the waiting room.

The four men had just settled down with their luggage, and no one was speaking; all of them were intent on coping with their plight. Even a minute seemed a long while, and they had a long winter night ahead of them.

The contractor shifted in his chair and asked, “What's the time?” He was wearing a watch, but he directed his question to the others, out of laziness or as a pretext for conversation.

Thirty-five â at least half an hour had been killed since they'd gotten off the train! The contractor found another question.

“Are there arrangements for sleeping?”

“On the floor?” someone said, dubiously.

The contractor had no objection for his part, but he accepted that the others probably had higher standards, and so, kept going.

It is usually difficult to make progress in a conversation after such monosyllabic replies, but fat people are sociable and gregarious; more words emerged from the depths of the easy chair.

“At least we have seats, think of the other passengers.”

There was no concurring reply, but, as though in response, the
sliding doors of the waiting room opened, and cold air immediately filled the room. All four passengers turned their eyes toward the door at this, even that wretched-seeming bookish man, who had been leaning to one side, his eyes shut.

Under the scrutiny of these four pairs of eyes, those who had caused the door to open paused. They were a couple. A young man stood with the door ajar: he was not fully visible but there were hints of a face, its skin chapped by the cold, a home-knitted brown pullover and a cheap pair of trousers. A girl stood by his side, almost nestling against him, even more obscured. She could barely be seen: just a flash of black hair, a proud vermilion streak, a smooth, young-looking neck, white light on her cheek. They stood there for just a few moments, said something softly before they turned and left â but even that seemed to blow a breath of warm air through the wintry waiting room. They were clearly newlyweds, maybe a couple of months in, maybe a year, but they were lost â still â in their love for each other. That slight pause at the door, those soft words exchanged or maybe not exchanged, then their retreat; with all of this they made it amply clear to the middle-aged men that they were still inhabitants of heaven, that as long as they had each other they wanted nothing else, nobody else.

The door was closed again, and all that remained was the heartless, miserly waiting room and four middle-aged men, distraught that the train was not coming, with the lack of comfort, of sleep.

Again, the plump, gregarious man was the first to speak.

“They didn't look like first-class passengers,” said the doctor.

“No, not because of that,” said the book lover with the furrowed brows, speaking from his corner for the first time since he'd entered the waiting room. “Not because of that. They went back when they saw us.”

Watching Her by Metal, Scarlett
The Giant Smugglers by Matt Solomon
Equinox by Lara Morgan
The Long Room by Francesca Kay
The Gates of Babylon by Michael Wallace
Turds in the Punch Bowl (A Story of No Ordinary Friendship) by Ashton, Jen
by Reason of Sanity by Gene Grossman
The Book of Even More Awesome by Neil Pasricha
Love in the Shadows by Caryn Moya Block
Noble Beginnings by Ryan, L.T.
Our partner