Read My Soul to Take Online

My Soul to Take 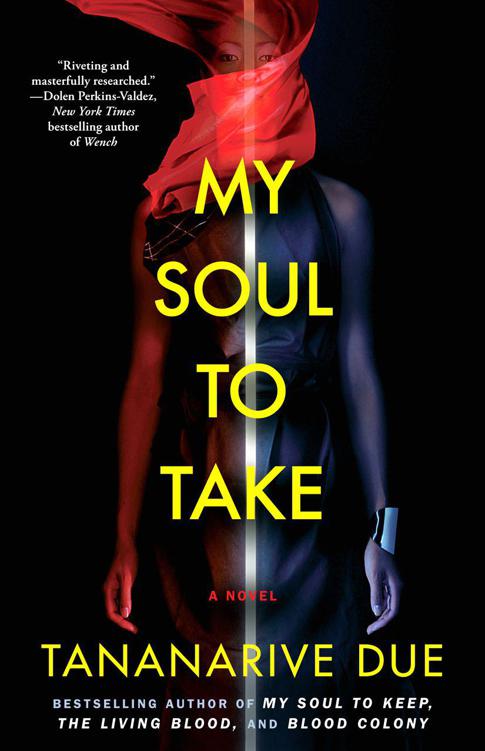 Essence
bestselling and award-winning author Tananarive Due delivers a heart-stopping new novel continuing the story of descendants of an immortal line of people who are the only ones capable of saving the world.

Fana, an immortal with tremendous telepathic abilities, is locked in a battle of wills. Her fiancé is Michel. But Johnny Wright, a mortal who is in love with her, believes that if she doesn’t stay away from Michel, they will become the Witnesses to the Apocalypse described in the Book of Revelation.

Fana and the Life Brothers are rushing to distribute their healing “Living Blood” throughout the world, hoping to eliminate most diseases before Fana is bound to marry Michel. Still, they cannot heal people faster than Michel can kill them. Due weaves a tangled web in this novel, including beloved characters from her bestselling
Joplin’s Ghost
, in a war of good against evil, making
My Soul to Take
a chilling and thrilling experience.

PRAISE FOR TANANARIVE DUE

“Due has become a modern-day Octavia Butler, a talented storyteller who stands tall among her horror cohorts Anne Rice and Stephen King.”

“Tananarive Due has one of the more arresting voices in contemporary American fiction.”

“Beware of spooky plot twists that will have your heart racing as you eagerly turn the page.”

“
Blood Colony
will steal your breath on every impossible-to-put-down page. Due is masterful in crafting this thrill-ride of a tale that was truly worth the wait!”

“An elegant, scary, richly exciting tale—all that we’ve come to expect from Tananarive Due.”

“The genius of Tananarive Due is in weaving an imaginative tale so expertly that the reader is convinced she has suspended time and all reason. Her storytelling is at once intimate and wholly epic. Her characters, though otherworldly and supernatural, are profoundly relatable and eerily familiar.”

—Blair Underwood, actor, director, and coauthor of
In the Night of the Heat

“Stunning … an event of sustained power and energy…. This novel should set a standard for supernatural thrillers of the new millennium.”

“The pantheon of modern horror gods is a small and frighteningly talented group: Stephen King, Anne Rice, Peter Straub, Clive Barker, Dean Koontz—and Tananarive Due. If there is any justice, Due’s exciting, powerful, ambitious, scary, and beautifully written supernatural thriller will be the first of a decades-long string of hits that will sell millions.”

“Smart, soulful, crafty Tananarive Due deserves the attention of everyone interested in contemporary American fiction. In
The Living Blood
, this young writer opens up realms of experience that add to our storehouse of shared reality, and by doing so widens our common vision. She is one of the best and most significant novelists of her generation.”

MY SOUL TO KEEP

“I loved this novel. It’s really big and really satisfying, an eerie epic that bears favorable comparison to
Interview with the Vampire
.”

“One of those rare gems that hook readers from start to finish.”

“Spellbinder Tananarive Due has spun a hair-raising tale.”

“Compelling…. An incredible story about eternal life that induces the reader to suspend disbelief until the very end of the book.”

“I enjoy reading the kind of novel that seduces me right into it and makes me forget about work or sleep.
My Soul to Keep
does that beautifully.”

ALSO BY TANANARIVE DUE

Copyright © 2011 by Tananarive Due

All rights reserved, including the right to reproduce this book or portions thereof in any form whatsoever. For information address Washington Square Press Subsidiary Rights Department, 1230 Avenue of the Americas, New York, NY 10020.

To my circle of voices:

I hear you, always.

“It wants to … turn me into something else.

That’s not too terrible, is it?

Most people would give anything to be

turned into something else.”

… And so a man and woman, mates immortal born,

will create an eternal union at the advent of the New Days.

And all of mankind shall know them as the bringers of the Blood.

—Letter of the Witness

How can a disaster greater than human reckoning be a triumph?

—Death and the King’s Horseman

MY SOUL TO TAKE

C
arlos Harris’s breath rasped as he stared at the building’s side entrance across the muddy courtyard. The door stood halfway open, a taunt. Or an invitation.

Carlos had scraped his arm raw sliding down from the low-hanging branches of the flowering Maricao tree where he’d camouflaged himself for the past hour, but pain was the least of his problems. Twenty-five yards from him, a stocky U.S. Army soldier patrolled the compound’s gate with an M-16. A shadow hid Carlos from the guard, but for how long?

He was miles beyond the town, past coffee plantations and bamboo forests, stranded inside the razor fencing of a two-story pale green building battered nearly white by the sun; maybe an old water-treatment plant or sewage facility. The building looked like it should have been empty, except for the mud-caked military truck and three civilian cars parked in a neat row near the main entrance’s glass double doors. The soldier with the thick, sun-browned neck guarding the gate behind him might shoot him on sight.

Truly Madly Guilty by Liane Moriarty
Hawaii's Story by Hawaii's Queen by Queen Liliuokalani
Before He Wakes by Jerry Bledsoe
Father of Fear by Ethan Cross
Night's Captive by Cheyenne McCray
The Dreamers by Gilbert Adair
Grey: Fifty Shades of Grey as told by Christian: 0 by E L James
The War of Art by Steven Pressfield
Steal Me From Heaven by Crawford, Toni
Unwrapping the Playboy by Marie Ferrarella
Our partner