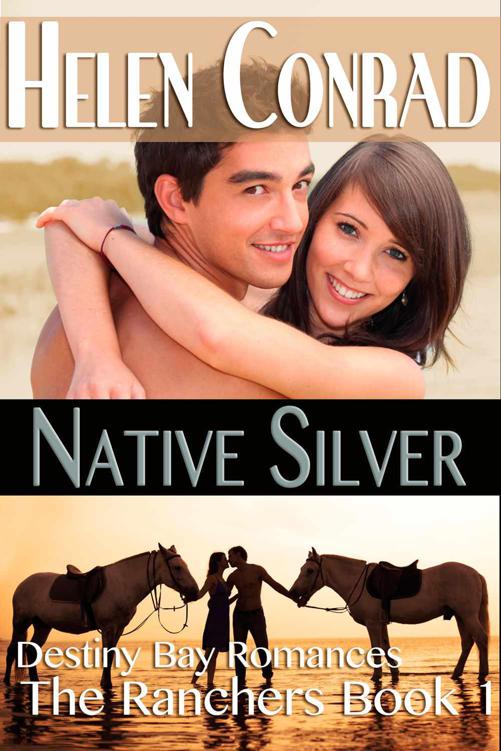 This novel is a work of fiction. Names, characters, places and incidents are products of the writer’s imagination or have been used fictitiously and are not to be construed as real. Any resemblance to persons, living or dead, actual events, locales, or organizations is entirely coincidental. All rights are reserved. No part of this book may be used or reproduced in any manner whatsoever without written permission from the author.

IF YOU WERE A GENTLEMAN

A refreshing swim in a cool mountain stream. The th
ought of it haunted Shawnee Carrington as she
rode her silver stallion. The early July day was hot
and dusty in the mid-California coastal valley. A swim was
just
what she needed.

Should she, or shouldn’t she? She raised her f
ace, trying to catch the hint of a breeze, but there
was only the heat, the dry, pounding heat, pressing
against her like a smothering cloak.

Shawnee stretched in the saddle, a tall, slim
young woman with a natural athletic grace to every
movement. Bright sunlight glistened along a cur
tain of hair as black as obsidian and reflected off the
surface of eyes the color of antique sterling, her coloring a direct complement to that of her silver
horse with his jet-black mane and tail. She and the
horse seemed all of a piece, perfectly attuned, one
almost the extension of the other. Even their move
ments were coordinated, as though they had a
perfect rapport, unspoken but unshakable.

“A nice, cool swim,” she whispered, leaning down
near her horse’s silky mane, “all naked and free, just like I used to.”

The horse snorted a soft response and Shawnee chuckled, rubbing her hand along the animal’s
neck. “I only wish I could let you go in too, Miki. But we can’t take chances.”

Chances. She smiled wryly, knowing every day
was a chance, every ride they took together. Some
thing could so easily happen. She had to be on her
guard every moment. She had to be more than Miki’s rider. She had to be his eyes.

“Come on, big boy,” she said softly, letting the pressure of her knees tell him what she expected
him to do. “You’ll get a drink out of this, at the very
least.”

She turned him up into the tree-covered hills, climbing higher and higher through the chaparral,
until she found the place among the oaks she’d
been dreaming of. She’d been away for five years, but it was still the same, still as cool and charming,
the sunlight coming down in dappled splendor through the dark green leaves, the water tumbling
in noisy celebration. She swung down off Miki and led him to the edge so that he could have a drink.

Granite boulders lay scattered all up and down
the stream, and near to where Shawnee Carrington
stood, three very large ones had piled up to form a
dam, making a nice swimming hole. She’d spent a hundred summer afternoons here, diving and sunning and sorting out her life.

“Drink up, Miki,” she said softly, running a gentle
hand over the patient animal’s velvet nose. “This
used to be my special place when I was young. I
want you to love it, too.”

There was just the suggestion of a catch in her
voice. She didn’t feel young any longer. Twenty-three was hardly at the edge of venerable old age,
but the last few years had taken their toll. So much
had changed since those carefree teen days, so
much had been lost. She was glad that this, at least,
had stayed the same.

When the horse drew back from the water, she led
him away and tethered him to a tree, then
turned back to the stream. The day was so hot, and
there was no one around for miles and miles. No o
ne would ever know. Why shouldn’t she have a swim, for old time’s sake, if nothing else?

No reason she could think of. Suddenly happy as
a child on her first outing to the seashore, she
kicked off her boots, pulled off her jersey top, then wriggled out of her faded jeans and panties, leaving her clothes tossed carelessly across the brushy ex
panse of a manzanita bush. A few quick steps
across the mossy bank, and she was plunging into
the icy water.

“Oh!” The gasp came bursting out as the cold water hit her skin. She laughed with delight,
splashing and diving into the shimmering water. This was wonderful, a lifesaver, just what she needed. Her body felt alive again. Why had she
hesitated?

She dived deep once, twice, then again, this time
kicking off from the bottom and rising with a happy
cry, shooting up out of the water like a dolphin from the sea.

Then, for just a moment, time stood still. She seemed to hang suspended in the air, only waist deep in the stream, water sheeting from her naked body and flying from her long hair, as her eyes locked with the dark gaze of the man standing on
the shore.

At first she was sure she was seeing things. Her mind couldn’t seem to connect with reality. There couldn’t be a man here. There’d never been a man
here before. It was impossible.

Oh, it must be impossible. Please, make it be
impossible.

She closed her eyes and breathed the hopeless prayer as she sank back down into the
water. But when she settled, chin grazing the mov
ing surface of the stream and all the rest of her
safely hidden, she opened her eyes and he was still
there.

He didn’t say a word, didn’t move a muscle, and she stood very still, wondering what to do. If only
there was some way to get to her clothes. If only
she’d never been so crazy as to think she could
relive the past just the way it used to be.

She wasn’t a kid any more; she was a grown woman. And grown women shouldn’t act like
children, especially in front of men like this.

Why, oh why, did it have to be David Santiago,
of all people who’d caught her this way? She’d
recognized him immediately, even though it had
been five or six years since she’d last seen him.
David was a hard man to forget, and there’d been a
time when she’d thought about him a lot.

Long and lean as the racehorses his family bred, he had dark hair and eyes, along with an arrogantly arched nose, that gave evidence of a family back
ground stemming from the early settlers of this coastal California valley, and maybe even further
back, to the proud, helmeted conquistadores
who’d first conquered the New World.

He stared at her and she stared back, willing him
to turn away, to walk back down the mountain
road, or, failing that, at least to evaporate into thin air, which seemed the least he could do under the
circumstances.

“Hi, there,” he said at last, his hand moving toward the brass buckle
of his leather belt. “How’s
the water?”

Her silver
eyes widened as she realized what he was
doing. “You’re not coming in here!” she gasped.

His
eyes were grave and watchful. “Why not?” He
slipped leather through brass and unclasped the
opening of his slacks, then pulled his shirt up over
his head with one quick snap. The broad chest he
exposed was tanned with a light covering of dark hair and was much more muscu
lar than she would have guessed. She stared for a
second, fascinated, then forced her gaze to meet his
again.

Oh brother. Did
she really think that was going to persuade him to
leave the area?

His mouth twisted, almost smiling, but his eyes
were still dark and serious. “You’ve already made
that quite clear,” he answered softly, and she
cringed, wishing she could walk back in time and
erase this whole incident.

His shrug cast away any further objections. “I thought I’d join you. And just to make sure you
don’t feel uncomfortable, I won’t have anything on
either.”

He dropped his slacks and she could see that he
was about to slip out of his briefs too, right in front
of her. She swung her head around and stared at
where the water narrowed into rapids, bouncing
down out of the swimming hole. That was obviously not an escape route, not if she wanted to live through the effort.

This was an impossible situation. She had to think of some saving
miracle, and very quickly.

“If you were a gentleman . . .” Her embarrass
ment choked off the words, but his sudden chuckle
would have done the same.

“If you were a lady,” he countered, “you wouldn’t
be skinny dipping in my stream.”

“I’m not . . .” she started to protest, because she c
ouldn’t be. Shawnee Carrington just didn’t do things
like
trespassing and swimming naked in front of a
man. But it was pretty difficult to convince even herself of that now. Here she was, after all.

And here he was—probably naked as a jaybird by now. She didn’t dare look to see. But she didn’t
want to leave him with the impression that she was
some sort of minor criminal. After all, there
were extenuating circumstances for her being here.
This stream had belonged to her family at one time.

But to him, she must seem like a nervy woman.
He might even think she was a town girl with a
crush on him who’d dropped in to try her luck.
She’d have to disabuse him of that notion once and
for all.

“I’ll get off your land if you just look the other
way,” she began, but the sound of his body cutting the surface of the water drowned out her words. He
was in the stream with her. Now what was she going
to do?

She glanced back in time to see him come back
up, water flattening his black hair about his head.
She could make a run for it, but he would see her! She was stuck here, paralyzed by her own modesty
and embarrassment. And now that he was in the
water too, what exactly was he planning to do?

“You stay right there,” she warned, backing towards the far side of the stream. “Don’t come any
closer.”

He smiled and this time the humor reached his eyes. She stopped, not really sure what he thought
was so funny.

“What sort of wild scenario do you have floating around in your head?” he asked, his voice a mocking echo across the water. “Do you think the sight of your body has driven me mad with uncontrollable l
ust?”

Forsaking Gray (The Colloway Brothers Book 1) by Kreig, K.L.
The First Day of the Rest of My Life by Cathy Lamb
By Any Other Name by Noel, Cherie
Highland Christmas by Coulter, J. Lee
Sunset Sunrise Sun by Chanelle CleoPatra
Undead and Unworthy by MaryJanice Davidson
JORDAN Nicole by The Courtship Wars 2 To Bed a Beauty
[sic]: A Memoir by Cody, Joshua
Stink: Solar System Superhero by Megan McDonald
Day of Wrath by William R. Forstchen
Our partner