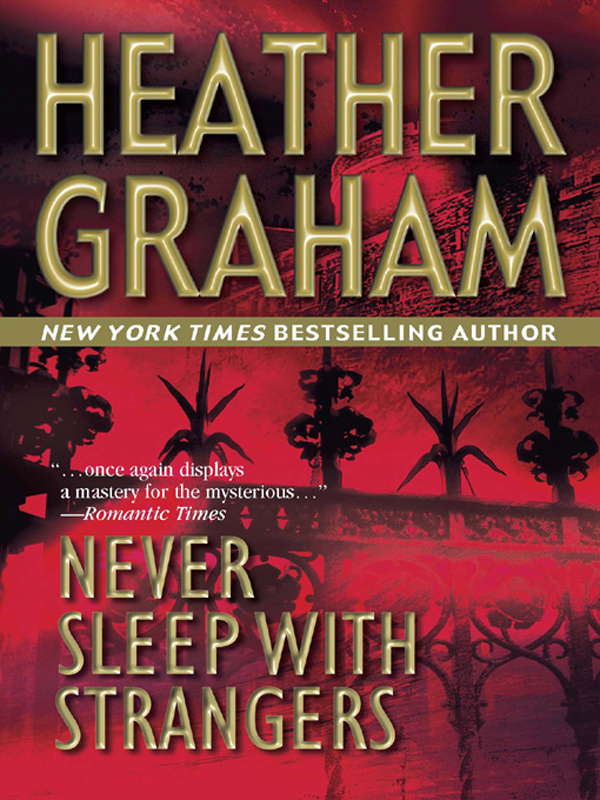 “Graham's tight plotting, her keen sense of when to reveal and when to teaseâ¦will keep fans turning the pages.”

âPublishers Weekly
on
Picture Me Dead

“Demonstrating the skills that have made her one of today's best storytellers, Ms. Graham delivers one of this year's best books thus far.”

“A suspenseful, sexy thrillerâ¦Graham builds jagged suspense that will keep readers guessing up to the final pages.”

“A roller-coaster rideâ¦fast-paced, thrillingâ¦Heather Graham will keep you in suspense until the very end. Captivating.”

“The talented Ms. Graham once again thrills us. She delivers excitement [and] romanceâ¦that keep the pages flipping quickly from beginning to end.”

âRomantic Times
on
Night of the Blackbird

“With the name Heather Graham on the cover, you are guaranteed a good read!”

DEAD ON THE DANCE FLOOR

NIGHT OF THE BLACKBIRD

IF LOOKS COULD KILL

Watch for the new blockbuster from
HEATHER GRAHAM

C
assandra Stuart was beautiful, and she knew it. She could manipulate others, and she knew that, too. If she could just make him turn around and look back at herâ¦

She knew that he'd heard her, but he didn't stop. He was really furious with her this time. As she watched, he continued down the gravel path that led to the loch. Maybe she had overplayed it this time, but she didn't want to be here in the back of beyond, in this godforsaken, remote patch of Scotland. Despite his famous guests, despite his famous charity game. They were
his
guests; it was
his
game. She hated the country; she wanted to be in London.

But she knew her husband, knew what he was thinking now. He'd known the day would go badly, that she would be rude and impatient and ruin it for them all. But damn him, he still wouldn't give it up! He'd hosted this event every year for the past decade. He'd made his plans; he had a life to live. The week was already underway. Besides, no matter how damned marvelous his wife might be, he'd told herâsounding awfully damned sarcasticâ
he
would be damned if a woman was going to lead him around by the nose.
Any
woman.

She meant to leave. Today. It was the last disruption she had up her sleeve. She hoped her departure would get through to him the way her pouting and petulance had not.

But she wanted him to come back to her first; she wanted to make love, to be passionate and exciting, to remind him that he couldn't exist without her. She would tell him that she needed him, remind him why he had married her. She could make him happy, could make him laugh, and she was damned good in bed, even if she had just taken a lover because she couldn't bear the look in Jon's eyes sometimes, knowing that he might on occasion be thinking of someone else.
Come back!
she thought furiously.
Let me seduce you just one last time so you don't forget, so maybeâ¦

She would wait until he had slipped away, and then she would pack, leaving behind a letter addressed to “My Dearest Darling,” explaining that she would be at the London Hilton, waiting for him when he could escape his dreary associates. And maybe, just maybe, he would come. He could be such a fool! She knew so much more about his guests and household than he did! Who was sleeping with whom. And why. Actually, she thought, and almost smiled, she knew a number of them very well. Intimately, one might say.

And still there was such a wretched hole of jealousy in her heart.

“Jon! Come back!” she called again. She experienced a strange new fear beyond the sense of powerlessness and loss she had been feeling so much lately. “Jon! Please come back! Or I'll make you pay!”

Her voice was both provocative and irritated. But he was still walking. So tall, hair so dark, shoulders broad and muscled. He was a beautiful man, and she was losing him.

Her tone was growing more petulant. She stood on the master bedroom's second-floor balcony, overlooking the rear courtyard. The rooms had been handsomely enough appointed, “remodeled” at the end of the seventeenth century and modernized by Jon himself just a few years ago. The balcony was a sweeping, curved affair that boasted views of three corners of the property. Here, in the rear, it looked over an elegant fountain with a priceless marble Poseidon, complete with trident, as its centerpiece. Despite the fact that winter was rapidly approaching, roses still bloomed around the tiled path that encircled the fountain. The path turned to gravel as it passed through the rose arbor and headed toward the loch. In the master chambers themselves, the walls were covered with antique tapestries, and there was a massive fireplace, as well as a state-of-the-art hot-water heating system with generator backup. A four-poster king-size bed sat on a dais, and one level down from the main section of the bedroom, just beyond a medieval archway, was a huge whirlpool bath and sauna. She had a huge dressing room and closet, as did he.

“What's not to like?” Jon had asked her impatiently, offended.

The decor was fine. She just hated the country. No excitement, no sense of life. It wasn't London, Paris, New York or even Edinburgh, for God's sake.

That was exactly why he liked it so much, he'd told her.

She was amazed to feel tears stinging her eyes. How could he care more about this pile of stones and his imbecilic friends than her? “Jon, Jon! Damn you,
Jon!
”

He'd talked about divorce; he'd said that things just weren't working out. But, he couldn't divorce her. He just
couldn't!
She'd already told him that she would make it impossible. She would drag him through the mud, give away a million filthy secrets about him and his associates.

She started to say his name, then realized that someone was behind her.

She spun around to see who had slipped in. “You, damn you! Get out! Did he send you? Get the hell out of my room.
Our
room! I'm his wife. I'm the one who sleeps with him. Get out!”

She spun back to stare out from the balcony. “Jon!”

She heard a rush of movement, like a whisper of air, and she turned back.

For a moment she stared into the eyes of her killer, and she knew.

“Oh, God!” she breathed, and, desperate, she began to cry out again.

She felt the pressure of the rail at her back. And she screamed.

Because she was falling.

And she could see her own death.

Jon Stuart had been angry, really angry. He'd intended to make good his escape. But something in Cassandra's voice gave him pause that time, and he swung around.

And there she was.

It looked as if she were sailing. In this, as in all other things, she was elegant. She was wearing a white silk dressing gown, and it billowed out around her. Her ebony hair was caught by the golden glory of the sun and shone with blue-black lights. It struck him that she even fell with dramatic grace and beauty.

And only after a split second of the mindless realization that he could do nothing at all to stop it did he realize that she was already in the act of dying. Screaming, crying out, shrieking
his
name, plummeting to earth.

She died in Poseidon's arms. Cradled within them, like a wayward goddess. Eyes closed, ebony hair and snow-white gown caught by the breeze. She almost looked as if she were sleeping, exceptâ¦

The trident had pierced through her.

And the snow-white gown was turning crimson.

His heart hammering, he began to shout, running desperately, as if he could reach her, help her, despite the fact that he knewâ¦

Cried out her name.

Reached her, and held her.

As her blood spilled over him.

While her eyes stared into his with an ever silent reproach.