Read Night Of The Beast Online

Night Of The Beast 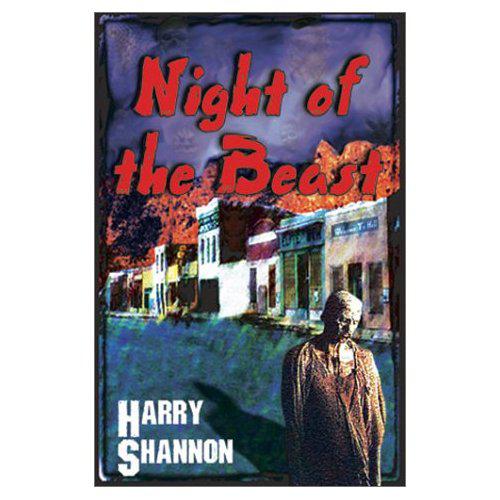 Table of Contents
NIGHT OF THE BEAST

PS. By the way, this novel is dedicated to Dennis Kelly, my English teacher at John Marshall Jr. High School in Pomona, California, 1963…Wherever he may be.
Preface

Oh, it has many, many names.
It has always been and always will be…
The Native Americans who first roamed this forsaken, barren land called themselves the Horse Humans. They were wise about the Nevada wilderness. They knew hunting and fishing, could create shelter from the chest-deep winter snow, learned where to find water and how to deal with scorching days and bitterly cold nights. And so the Horse Humans flourished and multiplied.
One summer the tribe noticed that the weak and the sick began to vanish, for no apparent reason. They found no track, spoor, or unusual scent to explain these disappearances, just the eviscerated bodies. When some of the very young and helpless were taken, nothing was found but their bones, picked clean of marrow. The wise elders met to share smoke and discuss the situation. They realized that something unknown and unseen now fed upon them.
The Horse Humans called the thing Orunde. They came to believe that Orunde lived deep in the ground, near the root of the tallest cactus, where the lone Two Trees grew; and that its dark hungers were as numerous as the blistering grains of sand. Orunde scattered skeletons about the desert, created thunderstorms to drown men and drought to parch their lips. It haunted the nightmares of their children, and left the Medicine Ones wailing from terrible visions. The people sacrificed to Orunde, so that it would not punish them. They tortured their enemies to death, and then made totems made of arm bones and fingers, wrapped in the hair from a horse. These things they offered unto Orunde, and they stayed on the land.
The legend had it that one blinding, hot summer Orunde was bored and hungry and wanted something to play with. It decided to twist the minds of all of the Horse Humans at one time, to see what would happen. The things that took place that night were beyond description. Bare skin was burned with forbidden symbols from a civilization long dust, and then flayed from screaming victims to be read aloud as they lay dying. Things were said, things were read and unspeakable things were done while Orunde fed upon the horror, smiled and fed again. It was a Night of Nights that seemed to last forever.
Come the morning, there were no Horse Humans left in the valley. Only a handful lived to tell the tale, and the tribe then ceased to be. Orunde saw this, and was pleased. Its hunger had been satiated. It went to sleep for a long, long time to digest what it had eaten.
Hearing of the disaster, the other desert tribes avoided the lands of the Horse Humans, calling it the Valley of the Bones. It was treated as burial ground. They marked and rode around it.
Generations passed.
Some white soldiers in blue coats arrived, but when told the legend of Orunde they did not stay. A band of hunters rode in searching for buffalo, but hearing the eerie night wind they broke camp and fled. Three decades later, settlers on the way to California rode wagon trains through the valley without ever pausing to rest.

Grim Company 02 - Sword Of The North by Luke Scull
Last Ghost at Gettysburg by Paul Ferrante
Eric Dinnocenzo - The Tenant Lawyer by Eric Dinnocenzo
Barefoot in the Sun by Roxanne St. Claire
The O’Hara Affair by Thompson, Kate
The Peripheral by William Gibson
Bliss: A Novel by O.Z. Livaneli
Scattered by Malcolm Knox
Fast Lane by Dave Zeltserman
Wake of the Bloody Angel by Alex Bledsoe
Our partner