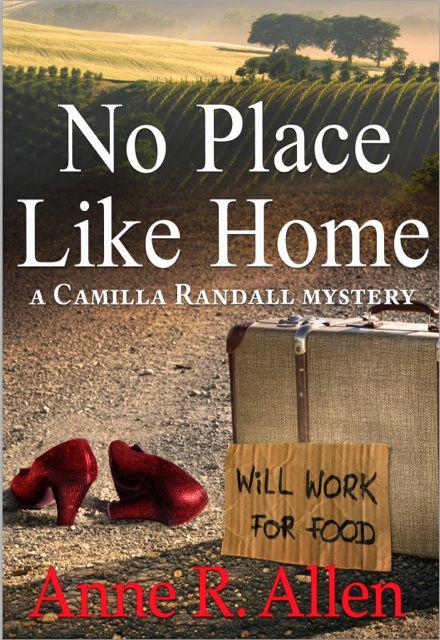 This novel is a work of fiction. The resemblance of any characters to persons living or dead is purely coincidental.

When we think of the United States of America we tend to use superlatives.

Biggest, fastest, richest. Especially richest. It goes without saying that, in the land of plenty, with so many resources and so much land, there is wealth enough that no-one should go hungry, or be homeless.

My co-writer Mark Williams lives in West Africa, in one of the poorest countries on the planet. I live in the UK, variously the fourth or fifth richest country in the world, depending on which statistics you use. But the number one place for wealth and opportunity is always the United States of America. The USA is, unquestionably, the richest nation on Earth. Ever.

So when I first read Anne R. Allen’s delightful comedy-mystery
Sherwood Ltd.
(which is set mostly in England) I was bemused to find one of the characters had come to Britain not as a rich American visiting the ancestral home, but as a “health-tourist” seeking medical care beyond their means in the United States.

It was a much-needed reminder that, while the USA may have riches beyond imagination, the distribution of that wealth is as uneven as in countries far, far poorer and far less democratic.

In
No Place Like Home
author Anne R. Allen explores another dark side of American life. Homelessness.

Now we all know about homeless vagrants who choose to live on the fringes of society. Many are former servicemen and woman unable to adjust to life outside of the armed forces. Some choose that way of life, true. But for most it is not a choice.

Then too there are people — often entire families — who have lost their home, through no fault of their own, and suddenly find themselves reduced to living in shelters and eating from soup kitchens, reliant on hand-outs. Honest American folk who would not long ago be giving to charities to help the poor in faraway places are now reliant on charity in their own homeland.

It seems beyond comprehension, in the second decade of the twenty-first century, there should be homeless and hungry people anywhere in the world, let alone in the United States. Surely this is the stuff of fiction?

Sadly, while Anne R. Allen’s characters and storyline are fictional, homelessness and poverty in the United States is very, very real.

Enjoy reading
No Place Like Home
. Then, whatever country you are in, spare a thought for the reality behind the fiction. For the many people for whom there really is no place like home.

Doria Windsor first heard her house was on fire from somebody called Mistress Nightshade. In a breathy, but suspiciously baritone voice, he/she phoned Doria at the hospital to say the fire department was on its way, but the great room already looked like a total loss, the garage was about to go with both Ferraris inside—and Doria owed a bundle for the shackles, harnesses and five leather floggers.

Doria politely informed the person that he/she had the wrong number.

Doria replied she was indeed Doria Windsor Sharkov, but she was in Los Angeles, about to be wheeled into the operating room, and she was sure if their house were on fire, Harry would have phoned.

"Kind of hard when you're a crispy critter," said Mistress Nightshade.

"Tell Harry this has stopped being funny." In three years of marriage, Doria had never learned to enjoy Harry's practical jokes. She was sixty years old, not sixteen, and had outgrown that sort of humor many decades ago.

"Hasn't that tranquilizer kicked in yet?" The nurse made a grab for Doria's phone.

Doria started to turn it off, but Mistress Nightshade spoke again. "This isn't a joke, sweetie."

Doria brushed the nurse away and pressed the phone to her cheek. "Tell Harry I can't deal with this right now. They've already given me a pill."

"He was in an upstairs bedroom with one of the slaves," Mistress Nightshade said. "That's where the fire started. My girl managed to jump from the back deck, but I don't know about Mr. Sharkov. I guess he thought he was safe in the Jacuzzi. I gotta go. Ten thousand should cover the damages. Replacement value, plus a little something so I don't feel the need to talk to the press—you know?"

Doria could hear people shouting in the background as Mistress Nightshade gave instructions for sending a check.

Harry loved his scandals almost as much as the tabloids did. If he was actually cavorting with sex slaves in the Jacuzzi, he'd want the world to know he could still cavort at the age of sixty-eight.

The inventor of Viagra had a lot to answer for.

"Dr. Singh is waiting," the nurse said. "This is his last surgery of the week. If we make him late for his Friday happy hour, there will be hell to pay." She confiscated Doria's phone and clicked it off. "I'm sure Home magazine can survive a few hours without you."

The nurse's grim face exploded in a big laugh.

"Yup. The drugs are working, honey. Let's get you into surgery. In a couple of hours, you'll have the tummy of a teenager."

Chapter 2—Everybody Loves a Lover

The landline phone rang from the back room just as I was locking up the bookstore for the day. Normally I'd let the answering machine pick up the call—especially after a hectic week like this. Morro Bay's tourist season was off to great start.

But there was a tiny chance the call might be from the mysterious Mr.
X
.

The hot guy with the badly-fitted suit and courtly manners had been in the store three times this week, buying local guidebooks and flirting like crazy. He'd mentioned something about going to a charity wine-tasting this weekend.

I sure would have loved to spend my Sunday off with somebody besides Plantagenet and Silas, who were madly planning their July wedding.