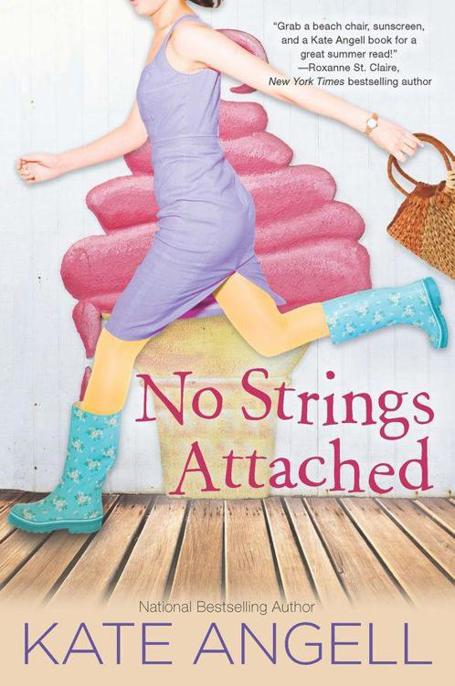 As a professional volleyball player, Dune Cates attracts scores of pretty women who flock to his side. But only one has managed to get under his skin--Sophie Saunders. Unlike the skimpily-clad beach groupies, Sophie marches to a beat all her own. And though she's afraid of the surf, burns in the sun, has two left feet, that doesn't stop her from trying every daring sport available on the boardwalk. Dune knows Sophie spells trouble, and he should keep his distance, especially since he's a no-strings-attached kind of guy. But he can't ignore an overwhelming instinct to protect her. And with the promise of ice cream sandwiches, merry-go-round rides and dreamy sunsets, it's only a matter of time before Dune gives in to the temptation of Sophie's soft lips.
Love is always sweeter in the summer.

Praise for Kate Angell and her novels

"Her stories are delightful with a satisfying ending." –
RT Book Reviews

"No fan of the genre should miss Angell's surefire romances." –
Booklist

Kate Angell's enchanting, warmhearted story gives readers a double dose of romance. Filled with wonderfully engaging characters, including an endearing hero, a shy yet courageous heroine and plenty of familiar faces, this is one very charming, feel-good tale. --Romantic Times

Alicia Condon, my editor. I appreciate you.

My go-to ladies who support me when I’m writing: Sue-Ellen Welfonder, Jina Bacarr, Marion Brown, Debbie Roome, and Kelly Callahan. I thank you.

“B
londe, metallic blue bikini, left side of the pier near the boogie board rental,” Mac James said in a low voice as he handed Dune a twenty-ounce cup of black coffee from Brews Brothers. The scent of Bakehouse doughnuts rose from a bakery box. “I’m betting Brazilian wax. She’s definitely a two-nighter.”

Mac blew on his coffee to cool it. “Women discuss boxers, briefs, or commando on a man. I debate waxing.”

Dune shook his head. Mac was his partner on the professional beach volleyball tour. On court, they were as close as brothers and in each other’s heads. Off court, their lifestyles differed greatly. Mac was up for anything at any given time. Dune, on the other hand, was more conservative. He had foresight and weighed the pros and cons. He knew when and where to draw the line, whereas Mac had no boundaries. He saw life as a free-for-all.

Mac had dated more women than Dune could count. He’d recently parted ways with a waxing technician at VaDazzle Salon in Los Angeles. The salon was known for its pubic hair designs. Mac now played his V-games with the eye of an expert.

Dune had pretty much seen it all. His bed partners shaped their pubes into lightning bolts, hearts, and initials. One female surfer dyed her pubic hair pink. Another was striped like a zebra. His most fascinating lover had been shaved and decorated with stick-on crystals. She’d sparkled like a disco ball.

His preference was, and always had been, a light bikini wax or totally natural. He didn’t need creative techniques to turn him on.

He leaned his forearms against the bright blue pipe railing that separated the boardwalk from the beach. He took a deep sip of his coffee. It was midmorning and the sun warmed his back right between his shoulder blades. The heat never bothered him. He’d grown up at the beach. The sand and shoreline were home to him. It was where he earned his living.

He looked toward the boogie boards. The blonde stood out. She was definitely Mac’s type. His partner loved long hair and legs that went from here to eternity. The woman’s hair skimmed nearly to her waist and her legs were sleek and toned.

Dune read women well. He knew who liked him as a person and who only wanted a piece of his action. He recognized the blonde as a woman who enticed men and enjoyed their attention. She made a theatrical production of laying out her towel, then rubbing on suntan oil. She was soon slick. Her entire body glistened.

Beside him, Mac opened the bakery box and offered Dune first choice. He selected a glazed doughnut. Mac chose one with chocolate frosting and sprinkles.

Sweet cheeks was tall and slender, Dune noted. She moved with the slow, sensuous grace of a woman who knew her body well and owned the moment. The lady was hot.

Mac squinted against the sun. “Tattooed chick in a fringed camo thong bikini, third in line at the concession stand,” he said. “Is that a tat of a rattler coiled on her stomach?”

She was a walking advertisement for a tattoo parlor. He saw just how much she liked snakes when she widened her stance. A python wrapped her left leg; its split tongue darted out as if licking her inner thigh.

“Snakebite, Dude,” Mac said. “Woman’s got venom. I bet her pubes are shaved and tattooed with a cobra.”

Mac reached for a second doughnut topped with cinnamon sugar. “Sex and snakes don’t mix. I’d go soft if I heard hissing or a rattle.”

They drank their coffee and ate their doughnuts in companionable silence. All along the coastline, sunbathers sought their own private space. That space was limited. The expanding crowd was an improvement from the previous summer when the economy tanked and one person had the entire beach to himself. It felt good to see his hometown thrive.

Mac nudged him, pointed right. “Check out the desert nomad at water’s edge.”

The woman was easy to spot. She was short and overdressed for the beach. She wore all white. White reflected the sun. A Gilligan bucket hat covered her hair. Her sunglasses were enormous, hiding her face. A rain poncho capped her shoulders, and she wore waterproof pants tucked into rubber boots.

She walked slowly along the compact sand, only to retreat when a splash of foam chased her. It appeared she didn’t want to get wet. She bent down once, touched the water, then quickly shook the drops from her hand.

She played tag with the Gulf for several minutes before turning toward the boardwalk. She tripped over her feet and nearly fell near the lifeguard station. The guard on duty left his female admirers and took her by the arm. He smiled down at her. She dipped her head, embarrassed.

The lifeguard gave her an encouraging pat on her shoulder and sent her on her way. Her rubber boots seemed overly large, and she stumbled two more times on her way to the wooden ramp. Sunbathers scooted out of her way.

The closer the woman came, the slower Dune breathed.

His heart gave a surprising squeeze.
Sophie Saunders.
He was sure of it. No one else would dress so warmly on a summer day. And Sophie was naturally clumsy.

Ten months had passed since he’d last seen her, although he’d thought about her often. They’d come together for a worthy cause: to boost the Barefoot William economy.

His younger sister Shaye had organized a local pro/am volleyball tournament to keep their town alive. He’d provided the professional players. The pros were auctioned to amateur athletes. Sophie had bid ten thousand dollars to be his partner. She wasn’t good at sports, but she had the heart of a champion.

Sophie, with her brown hair and evergreen eyes, had a high IQ but low self-esteem. She was a bookworm, shy and afraid of her own shadow. She feared crowds and the ocean, yet she’d powered through the sports event and made a decent showing. He wondered if she’d ever learned to swim.

Her image had stuck with him. He remembered things about her that he’d rather have forgotten. She had amazing skin, fair, smooth, and soft. Her scent was light and powdery: vanilla and innocence. Her hair smelled like baby shampoo. She hid her curves beneath layers of clothing, yet her body gave off a woman’s heat.

She’d bought her very first swimsuit for the tournament. He could close his eyes and still picture her in the cobalt blue tankini. He could hear the male fans on the outdoor bleachers applaud and whistle their appreciation. Sweet Sophie had an amazing body.

Their team had fought hard during the event. He’d tried to shield her when they’d battled through the loser’s bracket. His best attempts hadn’t saved her, not by a long shot.

Sophie wasn’t the least bit athletic and had taken a beating. Opponents nailed her with the ball time and again. She’d gotten sunburned, bruised her knees, and eaten sand. Yet she’d never complained. Not once.

To this day he regretted not telling her good-bye when the weekend ended. Instead he’d watched her walk away. It had been for the best. She was a Saunders, and he was a Cates. A century-old feud had separated the families back then.

The lines of hostility had blurred when Shaye married Sophie’s brother Trace. Both sides had eventually accepted their marriage. Only his Grandfather Frank had yet to come around. He was old-Florida, opinionated and stubborn, and set in his ways.

The Confessions of Max Tivoli: A Novel by Greer, Andrew Sean
County Line by Cameron, Bill
Make Me Burn: Fireborne, Book 2 by R.G. Alexander
The Chronicles of Riddick by Alan Dean Foster
Creations 1: The Perfect Creation by Marie Harte
The Sorcerer's House by Gene Wolfe
Independence: #4 Hayley by Karen Nichols
Clearwater Romance by Marissa Dobson
Make the Ghost of It (Witch Woods Funeral Home Book 3): (Ghost Cozy Mystery series) by Morgana Best
In Like a Lion by Karin Shah
Our partner