Read Nothing but Love Online 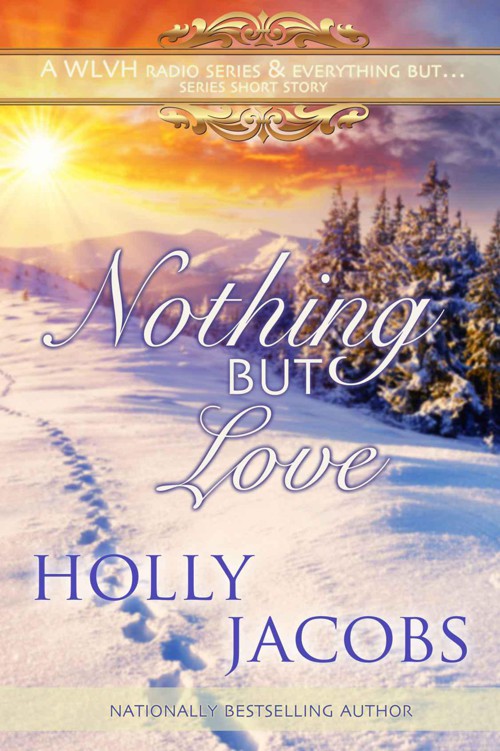 The characters and events in this story are fictitious.  Any similarities to real people, living or dead,
is coincidence and not intended by the author.

This s
hort story is inspired by, and dedicated to Marguerite, a little dog who suffered horribly, but still found the strength to wag her tail!

To Tami McGraw, a wonderful friend who shared Marguerite’s story with me.

And to the people at Houston County Humane Society who made Marguerite part of their family and work to find all the dogs who come through their doors their own forever-homes!

A WLVH Radio Series & Everything But… Series short story

“
Good morning, Erie!  This is Angel Hart, WLVH’s newest DJ.  Yes, I know, I’m working for a radio station that has the tagline, where love is more than just a song and that makes my last name, Hart, sound suspect.  But that’s what it says on my birth certificate.  It’s H. A. R. T.  No ‘e’ in it, but still, I think that my last name might have made my application for this position at WLVH stand out.  So, thank you Grandpa Elmer Hart, and all the generations before him.  Right now, I’ll be your weekend disc jockey, and I’ll being going out on a lot of the station’s publicity jaunts.  There are a lot during the holiday season.  I’m looking forward to meeting you all.”

One week.  Angela had survived her first week at work without any major mishaps or missteps.

She looked at the small elderly woman who sat across the table in the studio.  She held a small white dog on her lap, while a much larger black dog lay at her feet. “Mrs. Salo—”

The tiny grey haired woman leaned too close to the microphone.  “Call me Nana Vancy, Angel.  Everyone does.”

“I know that people are listening to this show on the radio, so they can’t see you, but from where I sit, you look like an Angel.  And since it’s the Christmas season, it stands to reason WVLH would get their own Christmas Angel.”

Angela didn’t have a clue how to respond to that, so she simply asked,  “Could you tell me why you’re at the radio station this weekend…with your dogs.”  The dogs had thrown her off when her first interviewee had shown up with them in tow.  Angela had worked at a station in Pittsburgh before relocating to Erie, and she’d dealt with odd guests before, but no one had ever brought pets to a radio interview.

Nana Vancy moved back a little way from the mic as she mused, “Angel Hart.  Yes, that’s the perfect name for a woman who works for a radio station that talks about being where love is more than just a song during the holidays.”

“Nana Vancy, you’re here to talk about…?” she tried again.

For a moment, Angela thought the woman was going to go on again about her name, but she finally said, “I’m here to talk about my foundation, Everything But a Dog.  It all started when I cursed my own family to bad weddings.  Once I broke the curse, I started matchmaking because I was bored, but there were occasionally a few problems with my matches. Eventually, I decided that my abilities were better served matching rescue animals to their forever home.”

“You have a big adoption event soon?” she asked.

They made it through the interview, and as Nana Vancy gathered up her dogs and started out the studio door, she turned and said, “Angel, words have power.  Every Hungarian knows that.  I’m here to tell you that Angel is exactly the right name for you.  You are going to find nothing but love.  And when you do, your entire world will change for the better.”

The woman and her dogs left.  Angela sighed with relief when the door closed.  That was officially the weirdest interview she’d ever done.  She wished she didn’t have to go cover the Everything But a Dog Day next weekend, but as the new kid at the station, she didn’t have a choice.

Justin Stein switched off his radio.  The old lady from the dog foundation sounded like…like his grandmother.  His Grandma Millie was that kind of feisty.  If she were here, she’d look at his house, devoid of any and all Christmas decorations, horribly messy with drapes that were drawn and she’d tell him to
buck up
.  She’d tell him to stop focusing on what he’d lost and think about others.  She’d squeeze his cheeks and tell him to pick himself up and just get on with it.

The problem was, picking himself up involved putting on his new prosthetic leg.  Then hobbling about using crutches.

He knew he looked pathetic hobbling around.  He didn’t want, nor did he need, anyone’s pity.

His doctor kept telling him that despite the infection, he was lucky.  He could have died.  Lost his life.  But they’d saved him by amputating his leg below the knee.  That was lucky, too, because below the knee was easier to adapt to.

He looked at the prosthetic leg, leaned against the couch’s end table.

There was nothing at all easy about this situation.

Angela kept waiting for the snow.  Everyone said it was a given in Erie, Pennsylvania.  And the holiday season was normally nothing but snow.  Because the city was on the shore of the great lake, it got snow in huge quantities due to something called
lake effect
.

Well, there was no lake effect snow, or any other kind of snow the following Saturday as Angela pulled up to the Erie shelter where Nana Vancy was having her Everything But a Dog event.  Before she was even out of the car, two dogs ran up to her…and then jumped up on her, greeting her as if she were an old friend.

She looked down at her jeans, that now sported big paw marks.

Angela brushed at the marks.  “Well, let’s look at the bright side…paw marks don’t show on the radio.”  She paused and added, “And it’s Angela.”

“Angel,” Nana Vancy said, as if she hadn’t heard her, “I love that sense of optimism.  If I were still matchmaking people, I’d definitely include that characteristic while I looked for your soulmate.”

The last thing Angela wanted was to have Nana Vancy fixing her up.  “Well, I’m sure all the animals are thrilled you’ve shifted your focus to finding the pets their forever homes.”  And frankly, so was she.

“Speaking of that, I might have the perfect pet for an optimistic angel.”
“Angela,” she reminded the older woman.  “And I’m not looking for a pet.  I’m new to town and I work weird hours.  I’m just covering the event for WLVH.”

“WLVH, w
here is more than just a song,”
Nana Vancy murmured, staring at Angela in a way that made her feel distinctly uncomfortable. “Words have power, Angel.  I told you that you were going to find nothing but love, I didn’t know it was going to be a dog, but it is.  And you will meet the love of your life by Christmas all because you’re going to play angel for a very special dog.”

“…and that is why I have a new dog,” Angela said on Sunday morning to her WLVH audience.  “Her name is Sera.  When Nana Vancy saw her name, she looked at me and said, Angel, do you know that the seraphim are angels?  She’s the one for you.  She truly needs her forever home in time for Christmas.

“I said no.  I meant no.  There are a million reasons I shouldn’t have a dog right now.

“But then I saw her.

“Sera was a dog the rescue group didn’t think would ever be adopted.  They found her on the side of I-79.  She’d obviously been out there a long time.  When they took her to the vet’s, she said Sera’s back was broken.  The only thing that still works below her waist is her tail.  And when she came out to meet me in her little doggie wheelchair, that tail wagged and wagged.  I had a mental image of those airboats they use in the Florida everglades.  Then, even worse than that tail, there were her soulful eyes.  I looked into them and saw nothing but kindness and optimism.  And I was lost.

“Maybe Nana Vancy’s right.  Words have power.  She told me I was going to find love, and now I have Sera.

“Of course, I’m going to have to make my new house wheelchair accessible.  It shouldn’t be too hard.  It’s a small cape on the east side of town.  There are only three steps to get inside. I think I can manage making the ramp.  Not that I know a reciprocating saw from a glue gun…”

Justin switched off the radio.  He wasn’t sure why he’d turned on WLVH, a station known for its love songs.  He was more of a country guy, especially since his leg incident.

WLVH’s newest disc jockey had probably only taken the dog home because she felt sorry for it.  No one, not even a dog, wanted to be pitied.

As for a ramp for dog, it was obvious that the woman didn’t know her way around tools.  How on earth was she going to manage it?

Justin glanced out his window at his truck.  He hadn’t driven it since he got home from the hospital, then rehab.  His physical therapist assured him it was okay.  The truck was an automatic.  He still had his right leg.  He could definitely drive.

And though he didn’t know where the woman’s house was, it couldn’t be far.  Erie was a city, but it was a small city.

Forget it.  There was no reason he needed to help her.

She could hire someone to build a ramp.

Or she could carry the dog in and out.

He remembered his physical therapist putting a belt around his waist and holding it as he first tried out the crutches, then the prosthetic and crutches, and finally just the prosthetic.  Ready to catch him if he fell.

Having someone hold him up was emasculating.

He couldn’t imagine the dog would like it any more than he did.

Psi Another Day (Psi Fighter Academy) by D.R. Rosensteel
Remember Why You Fear Me by Robert Shearman
The Sea Sisters by Clarke, Lucy
Shopping Showdown by Buffi BeCraft-Woodall
Viper's Pit (Diamondbacks Motorcycle Club Book 1) by Glass, Evelyn
Little Pea by Amy Krouse Rosenthal
Monkey and Me by David Gilman
Desire Line by Gee Williams
The Other Hand by Chris Cleave
The Owner of His Heart by Taylor, Theodora
Our partner