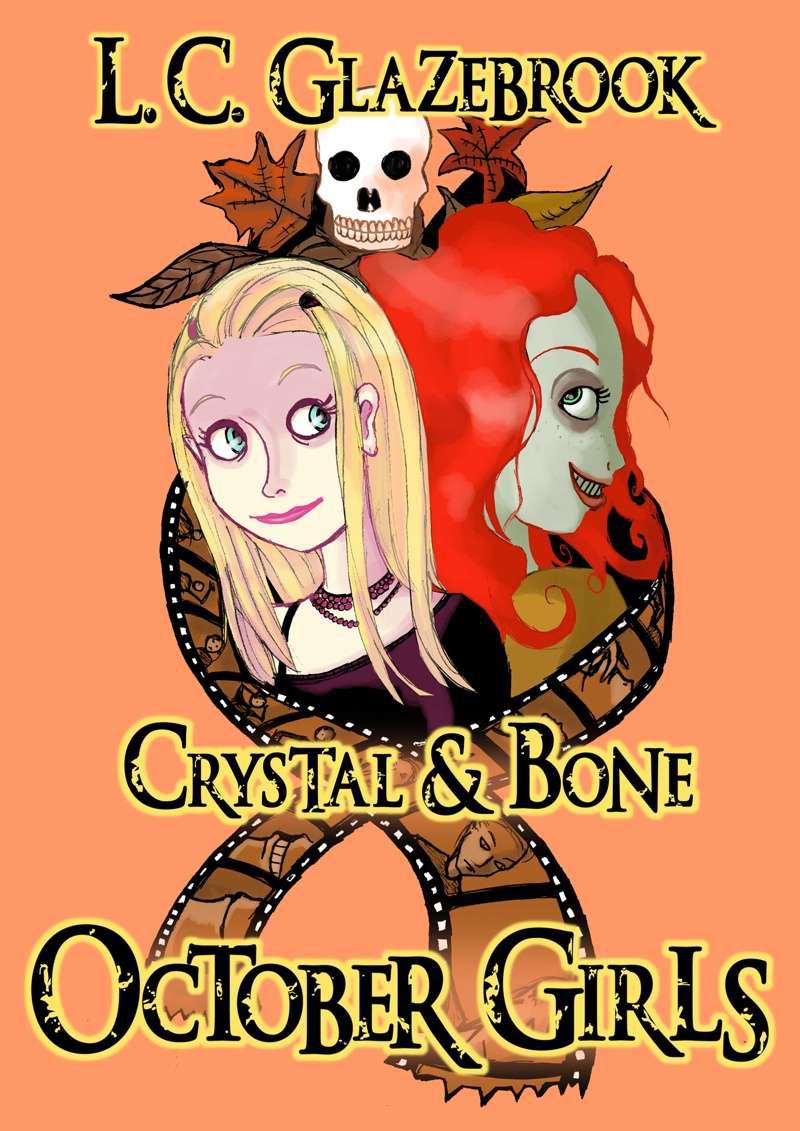 Five days until Halloween and all hell is about to break loose.
And it’s
all Crystal’s fault.
Momma warned her not to consort with the dead and
tried to teach her the magic spells that would close the portal to the
afterlife. But Crystal doesn’t want to be a trailer-trash witch like Momma. She
has dreams of going to community college and escaping the Appalachian town of
Parson’s Ford.
Her best friend Bone is only too happy to escape the
afterlife and help Crystal break the rules. Bone died too young, and she’ll do
whatever it takes to remain among the living.
Then a teen movie maker
comes to Parson’s Ford, and he has a very special project in mind: a horror
movie starring a real ghost. The kids who watch his movies turn into brainwashed
zombies. And to totally complicate matters, Crystal thinks he’s kind of a hunk,
and she’s afraid her boyfriend Pettigrew only loves her because of Momma’s magic
spells.
Now it’s Halloween, the night when the portal to the afterlife is
widest, and somebody’s been messing with Momma’s potions. The fate of the world
is in Crystal’s hands, but she hasn’t been paying attention to her lessons. And
a mysterious figure in the afterlife is urging Bone to stay loyal to her own
kind instead of to Crystal.
The movie is rolling, the creatures are
stirring, and the brainwashed teenagers are ready to welcome a new star from the
other side of the grave.
Crystal and Bone must overcome drama queens,
coffin cuties, and mangled magic if they want to remain best friends forever—but
at this rate, forever may not last much longer.

Like right now, when Bone was trying to ride shotgun on a pesky cash register. And that hunky guy with the stack of DVD’s was staring at her. And that gooey black hole in the wall was full of Lurken, Spooge, and Underlings.

“Do what?” Crystal Aldridge had been working at the Tan Banana & Movie Emporium for six weeks, but she was still struggling to master the register. The problem was the sticky keys on the computer terminal.

But she didn’t want to think about why the keys were sticky. Fatback Bob, who owned the combo video rental and tanning salon, liked to eat fried chicken during his shifts, and the smudges on the numeric keypad were most likely due to fryer oil.

“Mash three,” Bone said, soft and girlish and a little impatient for someone who had forever.

“Three it is,” Crystal said, poking the stubborn key.

“Who are you talking to?” said the hunk on the other side of the counter.

“Nobody,” she answered. Which was almost true.

The register sprang open, releasing the inky, sweaty smell of loose bills. She took the membership card from the customer and swiped it, noting his name.

Dempsey Van Heusen. Ain’t from around here, are you?

Three-name people were few and far between in the North Carolina mountain town of Parson’s Ford, unless they were Billy Bob, Bobby Wayne, or Fatback Bob. There was probably even a Bacon Bob around somewhere. But “Dempsey Van Heusen” sounded exotic, like an Internet clothes company or a yacht.

“You got a late fee.” Crystal gave Dempsey a glance and a quick smile. She’d checked him out plenty in the rounded security mirrors that adorned each corner of the store, but the mirrors had distorted him into an Oompah Loompah.

Up close, though, he was meat candy, lean and dark, his hair as thick as if it had been dipped in cooling asphalt. His black leather jacket was scuffed at the elbows, and he had a few chains dangling from the pockets. Robert Pattinson eyebrows with Brad Pitt lips. A little older than her, maybe 18.

The only flaw in his man-crushness was the tufts of hair that sprang from each nostril.

Don’t they have tweezers where you’re from?

“Seven-fifty,” she said. “That was for ‘The Church That Bled’ and ‘The Screaming.’”

“Well, they were worth it.” Dempsey pushed a bill across the counter.

“Chain Boy likes his cheese,” Bone whispered, even though Dempsey—or any other living person—couldn’t hear her.

“You keep talking to yourself.” Dempsey scratched at his ear. He wore a large silver ring on his middle finger that bore a grinning skull’s face. It might as well have been singing “Bad Boy.”

“Sorry. It’s just the voices in my head.”

“I have those, too,” Dempsey said, crushing the change into his jeans pocket without counting it. “With me, though, people think I’m psycho. Because of my movies.”

“What’s so psycho about your movies?” she asked. She hadn’t paid attention when she’d scanned them, and she couldn’t read the upside-down titles. However, the lettering was in a garish red font and the art dark and brooding, with imagery that suggested graveyards and dead trees and probably vampire sex.

A chuckle arose from somewhere, or it could have been the October draft skirling under the front door. Crystal threw a scowl beside her and picked up one of the DVD’s.

“’The Kiss of the Undead,’” she said, noting the subliminal image of a vampire’s glistening incisors protruding over a collagen-swollen lower lip. The actors’ names were set in smaller print over the title. Didn’t ring any bells.

“A black comedy that pumps a welcome transfusion into the bloodsucker
oeuvre
,” Dempsey said, as if reading the marketing material.

People in Parson’s Ford didn’t use words like
oeuvre
. Even though the town boasted a community college, the use of foreign words was limited to Tres Amigos Beans & Bowling, the local Mexican restaurant and bowling alley. Maybe there was more to Dempsey than a black leather jacket and what Fatback Bob called a “frequent flyer card,” the punch-out discount coupon that offered a free rental with every ten.

“You like scary movies?” she said, sounding lame even to herself. Some hottie hits you with a word like
oeuvre
, you wanted to come back with
milieu
or something. But the only French she could think of at the moment was “fries.”

Fatback Bob had built a tower of horror movies near the front of the store, since Halloween was less than a week away. Dempsey pointed at it and said, “Seen most of these.”

A mousy-haired old woman who might have been a school teacher playing hooky was the only other customer. Crystal had nicknamed her “Madame Fingers” because of her shoplifting habit. Madame Fingers looked up from her browsing of the comedy films and flared her nostrils as if smelling dog crap or the latest Adam Sandler vehicle.

“I don’t watch much horror,” Crystal said. An invisible elbow dug into her ribs.

Talk about your horror.
Dead friends sure can be annoying.

Dempsey took his rentals from her. “That’s cool,” he said, with so much cool he oozed disdain. “What do you watch?”

“I watch the classics, too.”

“
Touché
.” He tapped the vampire art on the DVD cover. “I make these.”

“A director. And I write my own scripts. Package deal.”

“Cool beans and ice rice.” Crystal was annoyed by her need to impress Dempsey. After all, she and Pettigrew had been dating for a couple of years, and he had been there for her through the funeral, the school drop-out, and the long bout of depression.

But maybe this wasn’t about Dempsey. After all, she had her own personal audience, an invisible friend with a ringside seat to her foibles, flirts, farts, and flat-on-her-buns falls from grace.

“I can’t wait.” Her lips felt like cotton candy.

He smirked. “If you can handle it.”

“What a jerk,” said the dead girl beside them, but Dempsey couldn’t hear. Only Crystal.

Lucky me. I wish she’d go solid, so Dempsey can see I’m the better-looking one.

He scraped the movies off the counter and headed for the exit, the silver chains on his jacket jingling with a mixture of menace and mirth.

He was halfway to the front door when the Orifice opened wider. It appeared first as a black dot of jelly on the wall beneath a Warner Brothers poster. Spreading outward, it soon covered an area the size of a basketball. Gurgling, belching noises issued from inside. It grew deeper and wider, glistening with oily dew.

Dempsey crinkled his nose and walked past the yawning cavern. Inside it, green slime dripped from stalactites that hung like demon teeth. The cavern seemed to breathe, exhaling a putrid wind that rivaled Fatback Bob’s chili farts. A shadowy form stirred in the depths, swaying like a sea anemone.

“Want popcorn with that?” she called after Dempsey, pimping Fatback Bob’s five-gallon bags of stale, buttery popcorn that were stacked like sandbags by the counter, blocking out the rows of Goobers, Good-n-Plenty, and licorice twists.

Dempsey gave one last backward glance at Crystal, grinning as if he’d won over another fan. “I like my horror raw.”

Then he shoved open the front door and escaped into the sunlight.

“Loser,” Bone said, flickering beside Crystal. It wasn’t a full materialization, more like a game of existential peek-a-boo probably designed to annoy Crystal and remind her that Tweeners could do things that Breathers could only dream about.

Crystal was appropriately annoyed. “Don’t do that.”

“That’s my job. You were giving him the eye and I’m supposed to keep an eye on you.”

“No, I meant don’t just go solid while other people are around.” Crystal checked the store’s lone customer. Madame Fingers was muttering and fidgeting with her oversize handbag, too obsessed with her shoplifting to notice a little thing like a ghost.

“Good, because your hair’s a wreck.”