Read On the riverside of promise Online

On the riverside of promise 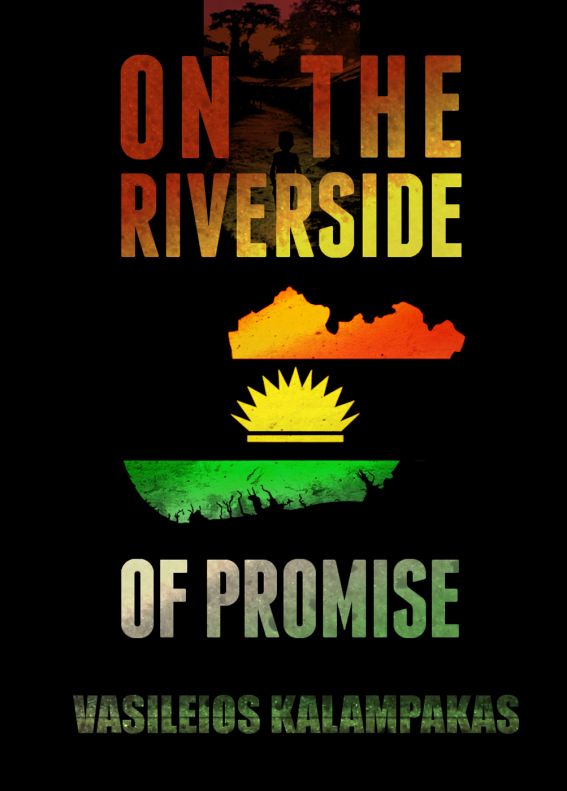 On the riverside of promise

a story in the forgotten Land of the Rising
Sun

Available in e-book form from
http://www.stoneforger.com, the Amazon Kindle store and other
online retailers.

This ebook is licensed for your personal
enjoyment only. This ebook may not be re-sold or given away to
other people. If you would like to share this book with another
person, please purchase an additional copy for each reader. If
you’re reading this book and did not purchase it, or it was not
purchased for your use only, then please return to Smashwords.com
and purchase your own copy.

Thank you for respecting the hard work of
this author.

You can reach the author at this e-mail
address:

Written and typeset with the LyX document
processor

Cover made with the aid of the GNU Image
Manipulation program

This time written with a plan in mind

Any
likeness with events and persons living or otherwise is purely
coincidental. This is a work of fiction.

In her Majesty’s service >

Well met on an ill road >

The bonds that tie >

of present and future,

the pure line, whose innocence

At confluences, of planes, the angle:

Dedicated to my brother, Nikos.

In
her Majesty’s service

Sweat ran freely down the red-haired
Englishman’s temples, smearing the jungle camouflage on his
clean-shaven face. A knife blade covered in dry mud sat in his left
hand, while his other hand made a rough circle in the air. It was a
hand signal for the command to encircle the target.

Five men melted away into the green humid
jungle in a heartbeat, as if they had been an optical illusion.
They moved fast; faster than what Ethan had believed them capable
of. He decided to stand back for a little while more, and see how
they could handle their approach on their own.

All of them stopped dead in their tracks and
hunched low when they heard noise, probably from the direction of
the clearing up ahead. The two men that formed the edge of the
squad aimed their rifles outwards, as if a switch had been thrown.
The point man laid himself flat with the silken grace of a cat,
knife drawn in his right hand while his left hand reached out for
his Browning nine millimeter. The rearguard moved like a pair of
dancers, covering each other’s back, both aiming their rifles from
shoulder-high, safeties clicked off to single-shot selection.

In that cautious small diamond formation they
moved as a whole, each step forward made with practiced ease and
well-earned confidence; the mark of a well-trained soldier. For all
intents and purposes, and as far as Ethan was concerned, he had
done a good job training them. What did bother him though, was that
they had yet to fire a shot in anger. He knew that nothing tests a
man like real combat.

Though they moved precisely as they had been
taught, and seemed quick and stealthy enough, Ethan couldn’t really
tell if they just went through the motions or if they were really
up for the challenge. After all, no matter how much one practices
before a show, it’s the opening night that really matters.

Ethan’s free hand was wrapped tightly around
a metal L-shaped trigger attached to a small box no larger than a
pack of cigarettes, from which a run of cables protruded and got
lost somewhere under the rich jungle tapestrie of green and brown.
With a tight grin, Ethan whispered to himself with the expectation
of a job well done:

When he double-clicked the trigger the first
thing that attracted everyone's attention were the flashes. And
then came the shockwaves, their force pummeling at everyone, making
every ribcage vibrate intensely as if tremors had seized them. And
that was just the opening note.

The scouts instantly dived for cover, falling
prone while keeping their arcs of fire firmly fixed to their own
particular zone of responsibility. A wry smile formed on Ethan’s
face: he seemed to be enjoying the performance.

The five trainees were on their bellies,
rolling and crawling over the jungle bed in an effort to find as
much cover as possible in mere moments. They exchanged quick
glances and made repetitive hand motions to each other,
communicating silently trying to establish a point where they could
fall back away from the guns blazing at them.

Every tree trunk and low bush or gully
counted for gold at times like these, and the five Marine scouts
from the 3rd Marine division made excellent use of their
surroundings. Very much so that Ethan felt a twang of pride at
seeing his handiwork in action. They were his men, and they seemed
every bit as professional as he intended them to be.

They quickly abandoned their exposed position
for a slightly shallow depression with good cover, fat tree trunks
strewn around them with thick bush for cover and a clear view on
all sides. It was a defendable position from which they could
easily spot a move against them and fall back while they harassed
their enemy firing and moving in turns. Ethan’s mind flashed with
the sudden realisation they were good enough to be Royal Marine
scouts, not just Nigerian troops.

He almost felt a hint of regret he couldn’t
be there with them when it really mattered. When the guns pointing
towards them would not be loaded with blanks. When the explosive
charges half a mile away would be real shells and mortars falling
right on top of them.

Almost, as Ethan reminded himself inside his
head, was the eminent keyword: This was not his war, not by a far
chance, and setting up mock engagements such as this one was as
close as he wanted to get to another war zone. Except for the times
when he itched. Except for the times he woke up in the middle of
the night drenched in sweat, knowing it wasn’t the tropical heat
that left him sleepless thereafter, but faces all too well
remembered and defined.

The team of five men had dug themselves in,
taking solid cover. The gunfire died down soon afterwards and Ethan
believed there was no point in continuing tracking and crossing the
jungle. He had seen what he wanted to see, and that was a team of
scouts, not a bunch of gung-ho Nigerians hollering with rifles
raised firing on auto, vying for Igbo blood.

Ethan raised himself above the brushes and
bellowed as if he wanted the cadets back at Sandhurst to hear him
clear as rain:

The team of five men gave no sign of sight or
sound that they had heard their instructor. Ethan repeated himself
with less enthusiasm:

Still, nothing could be now heard other than
the usual sounds of the jungle, the distant cries of birds and
monkeys, and the constant buzzing of mosquitoes and other assorted
exotic insects.

Ethan furrowed his brow and briefly
considered that the team might have actually extracted themselves
without him noticing, and decided to check the small depression
himself. With a hurried pace, he made his way through the brush and
in a few moments reached the position he had last seen them take
cover in.

He saw no-one, but suddenly felt a piece of
metal poking him through his left side, right between his ribs,
poised to pierce his heart at a single thrust. He had been caught
unaware. Once he looked sideways to his assailant he saw Onko, the
team scout leader smiling wildly, his bright white teeth a stark
contrast to his camouflaged dark face. A little stunned and a
little bit surprised, Ethan barely had time to let off a curse:

“Bugger me, you’ve grown into a real scout
Idowu.”

No longer wearing the same disarming smile,
the nigerian marine responded with a heavy accent, the Nigerian
pronunciation thick and strong:

Onko then sheathed his knife and the four
other men suddenly appeared from quite unlikely and widespread
places, from any one of which they could have put a bullet through
Ethan at their leisure.

Ethan nodded and made a small sigh, as if
acknowledging he had indeed let his guard down and had been
overcome, exactly what he tought his recruits should never happen,
especially while in the battlefield. Cultivating a little paranoia
went a long way in keeping a man alive, especially in a civil war
where telling a friend from an enemy was not as clean a business as
shooting at one.

Ethan did manage to save some face though,
when he pointed at his feet to a small bump in the ground, leaves
cluttered all over it and said:

“See now Ibrahim, that’s a mark for a
landmine. You might have killed at least one man when you chose to
fall back here.”

Onko seemed far from smiling at that comment
and with a mixed expression midpoint between anger and
disappointment he said to Ethan, making it sound almost like an
accusation:

“There was no place else to fall back and
take cover, Captain. It was a death trap then, for sure. What could
we have done different? Not fair, sir.”

The word `sir’ had a strange ring to it and
that probably was because it was meant to sound off-putting. Ethan
only cared to answer briefly right before he turned about and
started walking to the gathering area of the training field:

“All’s fair in love and war, sergeant. Says
so somewhere, I’m pretty sure of that.”

In the warm light of neon orange, Ethan
searched his pockets for some small change, but to no avail. He
rarely needed dimes and pennies when he made his cosmopolitan
visits to the center of Lagos, but using the jukebox in Louis’ bar
was such an occasion, and even more so a favourite habit.

In fact, Ethan was not a rare visitor to
Louis’ establishment and most would instantly recognise him. He was
widely known as the Englishman, both to the few locals and the
numerous extraordinary foreigners that frequented the
Metropolitaine.

Ethan maintained that he only came for the
regularly up-to-date jukebox, whilst his tab indicated a thirsty
sort of music lover with a certain taste for fine malts.

Malts such as the unusually fine scotch that
Louis kept stashed for the well-off or even the well-liked
customers. He had simply decided to thank God there was good scotch
to be found in a place like Nigeria and even more so in a bar like
Louis’. To make the realisation even more mind-numbing for Ethan,
there was good scotch to be found during what the Nigerian
government chose to characterise as a crisis. The Metropolitaine’s
crude and shanty decoration, or more appropriately its blatant lack
thereof only helped to somehow accentuate that a war was going
on.

A couple of ceiling fans still worked despite
what one might expect at first sight, barely keeping the air from
going stale.

It was with his usual wide grin that Louis,
the proprietor, approached Ethan and offered him a penny before
bowing slightly, impeccably dressed in a striped jacket, white
pressed shirt, bowtie and smart pants, an air of the thirties Paris
about him. Ethan accepted the coin gladly and immediately dropped
it in the slot, while Louis chimed in his blatantly French but not
unbearable accent: