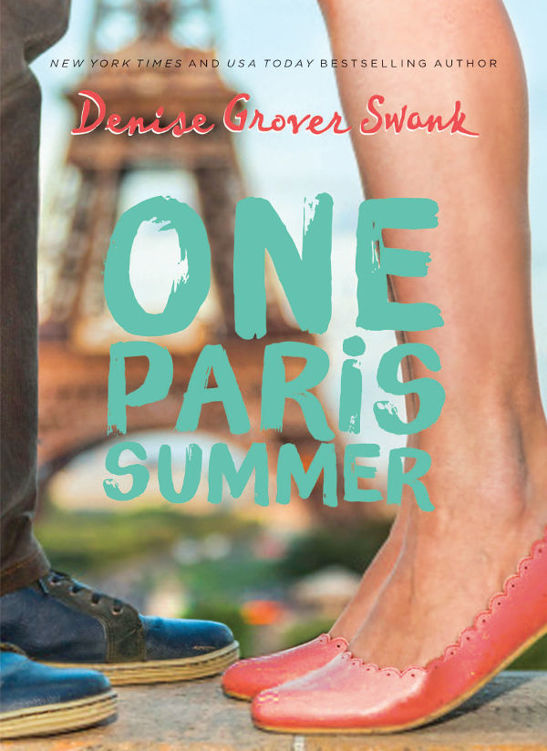 Any Internet addresses (websites, blogs, etc.) and telephone numbers in this book are offered as a resource. They are not intended in any way to be or imply an endorsement by the publisher, nor does the publisher vouch for the content of these sites and numbers for the life of this book.

This book is a work of fiction. Any character resemblances to persons living or dead are coincidental.

BLINK™ is a registered trademark of the Zondervan Corporation.

To my daughter Julia—her obsession with Paris inspired Sophie and Mathieu’s story.

“
WE ARE NOW
making our final descent into Charles de Gaulle. Please make sure your seat belts are fastened, your seat is in an upright position, and tray tables are stowed away.”

My stomach twisted into knots. This city was one of the most desirable vacation spots in the world, but I didn’t want to be here.

Sighing, I shook my sleeping brother. “Eric. Wake up.”

He lifted his eye mask and took out an earplug, his eyes barely open slits. “Have we landed?”

“Then leave me alone.”

I had no idea how he could still be sleeping. I was so freaked out, I hadn’t slept at all.

We were about to see our father for the first time in ten months.

I leaned over Eric and lifted the window shade, taking in the sight below the plane. Densely packed, grungy-looking buildings covered the landscape.

He groaned and blindly shoved my arm from the window. “I swear, Sophie . . .” But rather than finish the sentence, he turned away from me.

“You have to put your seat up, Eric. The flight attendant is coming down the aisle.”

He turned back around and slid his mask to the top of his head. “What’s she gonna do? Arrest me?”

He shot me a sardonic grin. My brother was such an idiot. But he was older than me by fifteen months and twice as popular at our private high school. Girls found his idiocy charming. I had no idea why.

“They
might
arrest you. You hear about people being taken off planes all the time.”

He snorted. “Good thing they’re taking me off the plane in the city I want to be in.”

“You don’t want to be here any more than I do.”

His eyebrows lifted. “Good point. Maybe if I put up enough of a fight, they’ll send me back to the good ol’ USA and you can spend eight weeks in Paris with Dad on your own.”

Panic rose in my chest. “You wouldn’t.”

His lips twisted in disgust. “I couldn’t get so lucky. Dad would probably bribe some official to make me stay.” But he still hadn’t raised his seat.

The flight attendant was two rows ahead, gathering trash. “
Eric
.”

“
Relax
, Sophie. It’s no wonder you don’t have a boyfriend. You’re too uptight.”

“No kidding, Soph. Live a little.”

The flight attendant stopped next to our row and looked at Eric’s reclined seat. “Sir, would you please return your seat to the upright position?”

“Of course,” he said, flashing her his flashy smile. “Be happy to.”

She moved past us, and a smug grin lit up his face. “See, Chicken Little. The sky didn’t fall on your head.”

“Shut up.” My tone was harsher than intended. “I can’t believe Mom trusted you enough to send us alone to Paris together.”

“She couldn’t exactly ship us in a box from Charleston, could she?”

I couldn’t believe she was sending us at all.

“Be a good girl or Dad might not let you be in his wedding.”

“Good.” I crossed my arms and flopped back in my seat. “I have no
intention
of being in his wedding.”

“You may not have a choice.” He didn’t sound happy about this, and I was sure it had more to do with concern for his own fate.

“He can make me give up my summer—the one summer I actually had plans—but he can
not
make me be in his wedding.” I shuddered. I couldn’t even imagine my father with another woman.

“
Please.
I had to quit my job at the golf course. My girlfriend broke up with me because she didn’t want to hang out alone all summer. I gave up a whole lot more than you did.”

That was debatable. My piano teacher had set up lessons for me to take with a local college professor to prepare for a scholarship competition in the fall. Now I worried I wouldn’t be ready. The colleges I wanted to go to were expensive. “At least Dane is coming on Sunday.”

A mere six days ago, Dad had called to drop his double bombshell—one, he was marrying a woman he barely knew, and two, he insisted we come to the wedding and spend the entire summer with him, his new wife, and her daughter. No discussion. No concern about whether his plans fit into our lives, only a sheepish
I’m sorry.

Eric had been even more vocal in his refusal, but Mom had surprised us by insisting we didn’t have a choice. In fact, she
seemed downright happy about Dad’s remarriage, but then she’d handled his departure better than any of us. In an effort to appease us, she’d talked Dad into letting each of us have a friend stay for a few weeks. Eric’s friend first, then mine.

I’d considered losing my passport, but my friend Jenna—who was supposed to come after Eric’s friend Dane—had a conniption. “That’s just so wrong,” she’d said as she sat on my bed, painting my toenails. “Who turns down Paris?”

“I’m not rejecting the entire city of Paris. Only my father.”

“So tolerate your father and enjoy Paris! Surely there’s something you want to do there.”

I thought for a moment. “I want to see the Eiffel Tower. I hope I’m not too scared to go up.”

She nudged my shoulder with hers. “Maybe you can get Dane to take you up. Just think, you’ll get almost four entire weeks with Dane Wallace.” She gave me a goofy look. “You and Dane. In Paris. Alone.” Dane got to stay longer because Jenna couldn’t come until the end of July. Not that I was complaining
too
much. I’d been lucky because Dane hadn’t been Eric’s first choice. His best friend, Dylan, couldn’t afford to leave his job all summer.

I rolled my eyes. “We won’t be alone. Remember
Eric
, aka the reason for Dane being there? And don’t forget my new stepsister, Camille.” Only her name wasn’t pronounced the normal way. Dad said it
Cam-ee.

“Whatever.” She shifted on my bed. “Look. You’ve crushed on the guy for over two years. This is your chance. It’s destiny.”

I gave her a serious look. “You mean it’s
your
destiny to come to Paris the day after Dane leaves . . . aka the reason
you’re
pushing this whole thing.”

In the end it didn’t matter what I wanted. My mother was so adamant, she very well might have shipped us in boxes.

The plane’s nose dipped forward, and I gripped the armrests, sucking in a breath.

“I know,” I said through gritted teeth. Like it was natural for a hulking metal object to coast thousands of feet into the air and back down. Forcing my grip to loosen, I closed my eyes and imagined I was sitting at my piano at home, my hands poised over the cool, smooth keys. My fingers started to involuntarily play the B-flat minor scale.

I opened my eyes when I felt the wheels touch down on the runway. Eric was giving me his trademark look of disgust. “I’m not sure if you noticed, but that’s an armrest. Not a piano.”

“It calms me down. Would you rather I freak out?”

His expression suggested that neither was his preferred option.

The prospect of eight weeks of separation from my piano almost freaked me out more than the fact that my father was getting remarried. While I would have loved to go to Julliard, my real dream was to study in Europe. No matter where I studied, scholarships were essential. Mom was a nurse raising two kids on her own now. And although my father’s job
sounded
fancy—architectural restorationist—he didn’t make much money. His career had also required us to move around a lot, but Dad had assured us we could finally grow roots in Charleston, where we’d moved in my sixth-grade year. There were plenty of old buildings there to keep him busy until we graduated.

It had been a great plan. At least until last August.

Eric gave me a look of mock pity. “You really think Dad’s going to come through on his promise to get you a piano in his apartment?” He shook his head. “Then you probably believe Mom wanted us to come to France because she wants us to get reacquainted with dear ol’ Dad.”

My mouth dropped open, but nothing came out. What was he talking about?

He leaned closer, his eyes narrowing with contempt. “Grow up, Soph. Mom wants to go to the beach with her new boyfriend in July. Why do you think she wanted us to come to Paris so bad?” He paused, his silence daring me to answer. “We’re too old for a babysitter, but what kind of mother would she be if she left two teenagers alone for a week? Dad only wanted us for a few weeks, but
she
insisted on the entire summer so she could spend more time with her boyfriend guilt-free.”

Grave Girl by Amy Cross
Dyson's Drop by Paul Collins
Detroit City Is the Place to Be by Mark Binelli
Claw Back (Louis Kincaid) by Parrish, P.J.
Beverly Byrne by Come Sunrise
All Falls Down by Morgen, Ayden K.
The Girl I Was Before by Ginger Scott
Erin's Way by Laura Browning
Summer's Desire by Ball, Kathleen
Reckless Heart by Barbara McMahon
Our partner