Read One Step Away (A Bedford Falls Novel Book 1) Online

One Step Away (A Bedford Falls Novel Book 1) 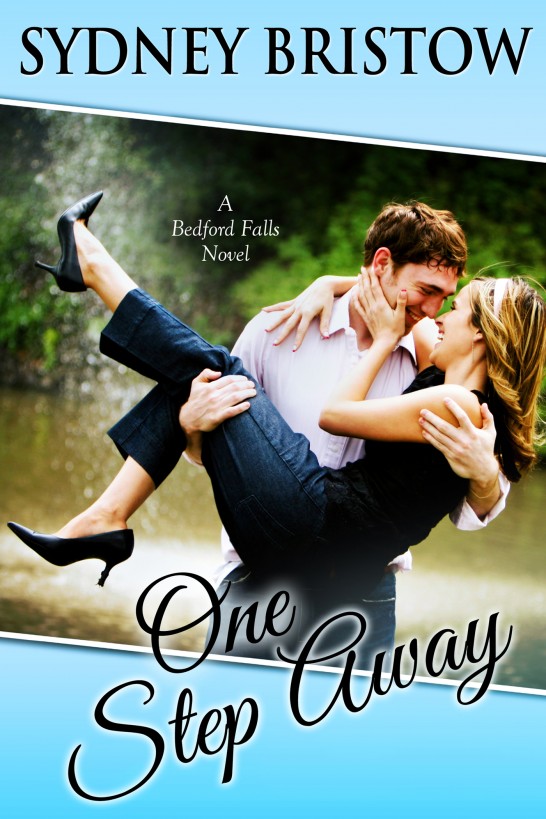 This is a work of fiction. Names, characters,
places, and incidents either are the product of the author’s
imagination or are used fictitiously, and any resemblance to actual
persons, living or dead, business establishments, events, or
locales is entirely coincidental.

All rights reserved. Except
as permitted under the U.S. Copyright Act of 1976, no part of this
publication may be reproduced, distributed, or transmitted in any
form or by any means, or stored in a database or retrieval system,
without the prior written permission of the author.

Cover art by The Killion
Group

Other Titles by S
ydney
Bristow

Reading the text-messaged plea, Alexander
Lawford left work at the Bedford Falls Public Library, where he
managed the Adult Services Department, and hurried into
Forever
and Always
, a 1980s-themed diner that his sister, Kelsey, owned
and operated. He glanced around the restaurant, searching for the
person who sent the urgent text message: his best friend and the
only woman he had ever loved, Marisa Moretti. Yet they weren’t
together, nor had they ever been.

Whenever she wanted to break up with a
boyfriend, Marisa always visited the diner, not only because she
and Kelsey were close friends, but also because a public breakup
reduced the chances of an ugly incident if her ex reacted in an
ungentlemanly manner. And judging by the clipped message, Alexander
guessed the request was not only possible but probable.

He looked past the restaurant’s glittering
neon lights and memorabilia: signed photographs from movie stars,
framed covers of
Rolling Stone
magazine, sports jerseys
encased in glass, and numerous other souvenirs from the era. Still,
he didn’t spot Marisa anywhere.

Behind the front counter, Kelsey waved a
beige hand towel to catch his attention. With long, curly blond
tresses, she had applied dark mascara that accentuated
olive-colored eyes. Numerous silver earrings pierced her ears, and
a gold cross dipped between plenty of cleavage.

“Where is she?” he asked, frowning at his
sister’s revealing outfit before scanning the diner for Marisa.

“Guessing she went to the restroom.”

Alexander let out a sigh of relief, glad
that Marisa’s ex-boyfriend hadn’t convinced her to give their
relationship another shot. If she had, Marisa would have already
left. AT least now, he knew that she still planned to break up with
her boyfriend. Excitement whipped through him. Now that Marisa had
left another relationship behind, it once more gave him an
opportunity to try to find out why she never considered him
boyfriend material.

She often complimented him on his sense of
style, which today consisted of a navy blue dress shirt, a matching
silk tie that exuded confidence without trying too hard, khaki
Dockers, and polished brown shoes.

And since Marisa worked at the Bedford Falls
Public Library as the Youth Services Department Head, it wasn’t as
if she could say he had a horrible job, since their salaries were
comparable and they had the same benefits.

At thirty, Alexander also regarded himself
as decent looking, even if a few strands of gray had sneaked into
his brown hair, and he lifted weights and hit the treadmill a few
times a week at the gym, so he stayed fit. And most importantly,
they were best friends. They understood each other, got each
other’s humor, and confided in each other, so he had no idea what
discouraged Marisa from looking at him as more than just a best
friend.

“You’re like a relief pitcher,” Kelsey said,
looking disappointed. “You get called in to pick up the save. But
it sucks that you never pick up Marisa.”

Ignoring the comment, he wanted to address
the stares every single man in the diner directed at his 28-year-
old sister. He’d always been overprotective of her, especially
since she had a smile for everyone, took others at their word,
always looked for the best in people, and never seemed to recognize
that they might have ulterior motives.

He motioned toward her chest without
glancing in that direction. “Do you have to show off the dynamic
duo?”

“They attract customers. And in this
business climate, I’ll do whatever it takes to get an edge.”

“I get that, but do you have to wear
such…revealing clothes?”

“I know you’re all for walking the streets
nude, but that whole indecent exposure state law thing? Kind of
important if I want to stay in business. And you’re a librarian?
Think of the kids! Some public servant, you are – corrupting young
minds. Seriously, that master’s degree of yours was a waste of
money. Makes me glad I skipped all that nonsense. Which reminds me:
The Witching Hour
opens in a few weeks. I expect you and
Marisa to stop by,” she said, referring to her new
paranormal-themed restaurant which featured witch and vampire
décor.

“We’ll be there.” But he didn’t fall for the
bait, allowing his sister to get him off the subject. “I’m just
saying that not all men are harmless. I worry about you.”

She smiled as she squirted some disinfectant
on the countertop then rubbed away grease with her hand towel. “I’m
lucky to have you, big brother.” She cocked her head to the left.
“But another woman needs your help right now.”

He turned to see Marisa, now seated in a
booth off to the right, giving him the long-established signal for
help: scratching her right ear before flipping long, lustrous blond
hair, which she’d recently colored from a darker shade for a change
of pace, across delicate shoulders. Now he understood where Kelsey
got the baseball analogy, since managers often gestured to relief
pitchers to enter the game.

The usual sense of dread overwhelmed him.
Alexander knew all too well why men had difficulty detaching
themselves from Marisa, but this was the fourth time that he would
confront an ex-boyfriend in just over two years.

Although he looked forward to Marisa
returning to single status, he didn’t look forward to a possible
altercation with an angry ex-boyfriend. So far, he’d avoided
resorting to violence, which would bring negative publicity upon
his sister’s restaurant. But that didn’t mean that he wouldn’t one
day need to defend himself.

“Are you ready?” Kelsey asked with a large
grin, ready to head into the back room to cut off Bruce
Springsteen’s “I’m on Fire” to replace it with a carefully chosen
song that typified Alexander’s upcoming duty.

He didn’t respond, just listened to
Springsteen yearning for a woman he desired more than any other,
while knowing that he would never have her. Alexander tried not to
read too much into the similarities between the song and the
predicament he now faced with Marisa. Then again, a parallel could
only be drawn if he threw in the towel. And he had no intention of
giving up on the woman he was certain was his soul mate.

Alexander pushed away from the counter and
flipped a finger in the air, indicating that she could cut off the
satellite radio station in favor of playing his “theme song” from
her iPod.

The ominous gong and drumbeat from Michael
Jackson’s “Beat It” pumped through the speakers in the ceiling. Of
course, the restaurant’s few dozen customers had no idea that
Kelsey had selected this song for her brother’s task, but Alexander
spun back to her, shaking his head at her immaturity. The song
didn’t apply to him. Sure, he encouraged Marisa’s ex-boyfriends to
leave, but the result didn’t end with him any better off than the
men he compelled to leave. Therefore, he wasn’t exactly telling
these guys to beat it.

She smiled at him. But it wasn’t the smile
that she bestowed upon those she shared an intimate connection
with, the one Alexander yearned to see directed toward him, the one
that made her blue-flecked eyes sparkle with passion and happiness.
They had an intense magnetism that reeled him in without restraint,
no matter how much Alexander tried to resist their pull. And he had
tried. Lord knows he had tried. But they had such vivacity. Such
spirit.

He caught sight of the soft, smooth slope of
her nose, a characteristic that made her self-conscious, although
she never explained why. Alexander found that completely absurd: he
considered it her most attractive feature, and he wanted to press
his own lips against it just to soothe her apprehension.

He examined her face: an arched left eyebrow
that might trigger a competitive nature, appear suspicious if given
uncertain circumstances (like now), and might even look unyielding
when caught by an inquisitive mind that branched out in various
directions at any given time. But he’d also seen her notch that
eyebrow a few times in quick succession when in a flirty mood. And
what he wouldn’t give to have her lavish that teasing gesture upon
him.

He sidestepped a waitress who was leading a
couple to a table beside him, dashing his amorous feelings and
allowing him to focus on his assignment: persuading the boyfriend
out of Marisa’s life. She believed that men simply had a difficult
time letting go of relationships. She didn’t recognize the rarity
in finding someone like her.

When she looked in the mirror, her
reflection never manifested the graceful image that Alexander saw.
Plenty of women were beautiful, but few also had a fun, easy-going
personality alongside a wonderful sense of humor and a sharp
intelligence that could challenge many of the winning contestants
on
Jeopardy
.

As he pulled up to Marisa’s booth, Alexander
directed his attention to the man sitting across from her.

In his early thirties with wavy black hair
and a couple days of stubble on his face, the soon-to -be ex wore a
Motley Crue T-shirt that proclaimed “Girls, Girls, Girls” across
the front. A tiny, silver skull pierced his left ear and a soul
patch lined the space below his lower lip. He twisted his neck and
looked up at their uninvited guest

“We’re busy here, do you mind?” He turned
away from Alexander and redirected his attention to Marisa.

“I don’t mind, but she does,” Alexander
said, nodding toward Marisa without taking his eyes off the guy.
During these situations, he worried that one of these jilted
boyfriends would take offense to his unwanted company, propel
himself out of his seat, and throw a punch.

And more than anything, Alexander didn’t
want to get into a fight, because the last time he’d resorted to
violence had convinced him to never again take up arms. That pledge
now held more weight than ever before.

But that didn’t stop vicious thoughts from
circling his head. After all, this man once had the honor of
holding Marisa’s hand after exiting restaurants, had the
opportunity to embrace her during a scary movie, had the good
fortune to kiss her…

He tore the images from his mind, his gaze
falling once more on the “Girls, Girls, Girls,” T-shirt, which
showcased four dudes on motorcycles. Did this guy get the irony
behind that absurdity? Probably not. That lack of insight persuaded
Alexander to be more direct with the man. “The lady asked you to
leave. Please be a gentleman about this.”

Ignoring Alexander, he stared at Marisa for
a long beat. “You’re serious?”

She met his gaze with an empathetic look. “I
truly meant what I said…the last three times we’ve seen each
other.” She winced, looking pained to have delivered such news.
“I’m really sorry.”