Read Our Lady of Pain Online

Our Lady of Pain 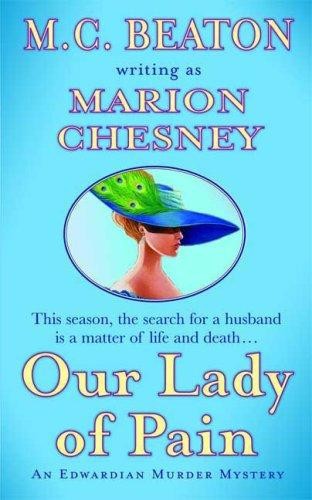 The Skeleton in the Closet

Agatha Raisin and the Haunted House

Agatha Raisin and the Case of the Curious Curate

Agatha Raisin and the Day the Floods Came

Agatha Raisin and the Love from Hell

Agatha Raisin and the Fairies of Fryfam

Agatha Raisin and the Witch of Wyckhadden

Agatha Raisin and the Wizard of Evesham

Agatha Raisin and the Wellspring of Death

Agatha Raisin and the Terrible Tourist

Agatha Raisin and the Murderous Marriage

Agatha Raisin and the Walkers of Dembley

Agatha Raisin and the Potted Gardener

Agatha Raisin and the Vicious Vet

The Quiche of Death

OUR LADY OF PAIN
. Copyright © 2006 by Marion Chesney. All rights reserved. Printed in the United States of America. No part of this book may be used or reproduced in any manner whatsoever without written permission except in the case of brief quotations embodied in critical articles or reviews. For information, address St. Martin’s Press, 175 Fifth Avenue, New York, N.Y. 10010.

For Sophie and Tom Lacey

O splendid and sterile Dolores,
Our Lady of Pain

Up until that dreadful day in February, Lady Rose Summer would have sworn on a stack of Bibles that she was not a jealous woman.

She and her companion, Daisy Levine, had been suitably attired by the lady’s maid to go to work: severe tweed skirts and jackets, long woollen coats, and—to the distress of Daisy—depressingly plain hats.

The fact that the Earl and Countess of Hadshire had allowed their daughter to go out to work was the result of many stormy scenes. Rose was engaged to a private detective, Captain Harry Cathcart. His previous secretary, too fond of gin, had sobered up and taken herself off to do mission work in Borneo. Rose, who had trained herself in shorthand and typing, had promptly offered to replace her.

Her parents did not know that she had an arranged engagement with Harry. Having failed a Season, they had threatened to send her off to India, the favourite destination for all failed debutantes. Horrified, Rose had begged Harry to ask for her hand in marriage.

The reason that her parents had finally capitulated was because their daughter had previously got herself into so many dangerous situations, and Harry had pointed out she would be safer under his constant protection. Daisy had promptly volunteered to act as undersecretary to guard her mistress.

The day was cold, blustery and dark as they entered Harry’s office in Buckingham Palace Road.

Daisy lit the gas lamps, raked out the fire, piled up paper, kindling and coal, and soon had a cheerful blaze going.

From the shadow behind the frosted glass of the inner door, they could see Harry had already arrived. They hung up their coats, unpinned their hats and sat down at their respective desks.

Harry put his head around the door. “I have some letters for you to type. Bring your notebook, Miss Summer.” It had been agreed to drop Rose’s title while she was at work. “Miss Levine, you will find on your desk various bills to be sent out.”

Rose sat primly in front of Harry, her notebook ready. Harry shot her an irritated glance. Despite the severity of her hairstyle, Rose was disturbingly beautiful, with her large blue eyes and clear skin. He often chafed at this odd engagement and wished to end it, but somehow could not bear to think of Rose with any other man.

He was a tall man with thick, dark hair going slightly grey at the temples. He had black eyes under heavy lids and a hard, handsome face.

Rose gave a little cough, wondering why he did not start dictating. Harry gave himself a mental shake and began the day’s business as Rose’s pencil flew over the shorthand pad.

When he was nearly finished, Rose heard the outer door of the office open. Then Daisy entered and said, “There’s a lady to see you. A Miss Dolores Duval.” She handed Harry a little visiting card.

“That will be all for now, Miss Summer,” said Harry. “Show her in, Miss Levine.”

A subtle scent preceded Dolores. Rose blinked at the vision that entered the room. Dolores had a curvaceous figure clad in a sky blue velvet gown. Her sable coat was thrown open. The gown was low-cut to reveal the top halves of two magnificent white breasts. On her golden hair was perched a saucy little tricorne of a hat with an ostrich plume wrapped around the top in a half circle.

Rose left them and went back to her desk. “I didn’t think he did any jobs for the demi-monde,” hissed Daisy. “That one’s no better than she should be.”

“I’ve never heard him laugh like that,” exclaimed Rose.

Rose tried to type, but her fingers, usually so nimble, kept hitting the wrong keys.

Dolores seemed to be with Harry for quite a long time. At last they both emerged, Harry looking younger and happier than Rose had ever seen him appear before.

“Finish your work,” ordered Harry, “and then take the rest of the day off.”

He and Dolores went out and Rose and Daisy could hear them descending the stairs. Dolores’s voice floated back to them. “Such a greem-looking pair of secretaries.
Tiens!
Don’t they frighten you?”

They could not hear Harry’s reply. They went to the window. Harry helped Dolores into her carriage and climbed in after her.

“Doesn’t,” corrected Rose. “Why should it? You know my engagement to the captain is merely an arrangement.”

“It’s an arrangement you’ll soon be free of,” said Daisy, “unless you’re careful.”

“Home early?” commented the Lady Polly as her daughter walked into the drawing room. “I hope this means you’ve given all this silly nonsense up.”

“Not at all. The captain merely had business to attend to.”

“Oh, he has, has he? Well, your precious fiancé has just phoned to say he cannot escort you to the Brandons tonight because he has work to do. Such a disgrace. I have asked Jimmy Emery to escort you.”

Rose felt miserable. Jimmy Emery was one of those young-men-about-town who were called on as escorts or dinner guests by people who had been let down at the last moment.