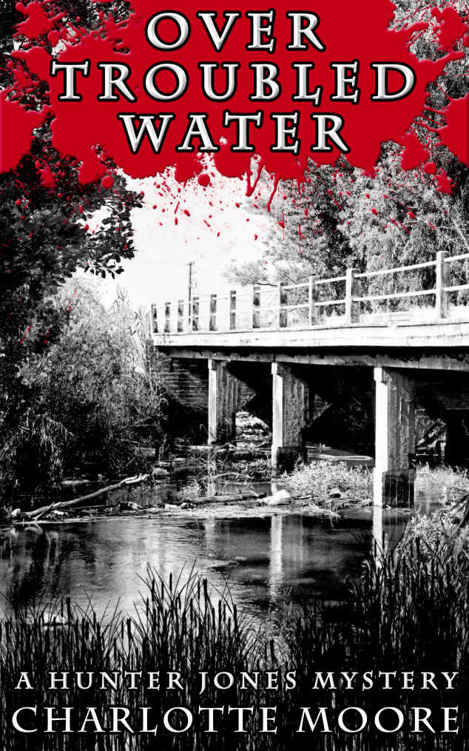 This book is a work of fiction. Names, characters, places and incidents are either products of the author’s imagination or used fictitiously. Any resemblance to actual events, locales, or persons, living or dead, is entirely coincidental. All rights reserved. No part of this publication can be reproduced or transmitted in any form or by any means, electronic or mechanical, without permission from the author.

It was seven on an April morning, still a little cool and misty, but with the promise of a beautiful spring day ahead. Wild dogwoods were blooming in the woods on either side of Sumter Road, and in one place where a house had stood long ago, a mass of wisteria was climbing into the trees.

Aaron Twitchell wasn’t appreciating the beauties of nature. He was scowling and clutching the steering wheel of his battered Ford pickup while his wife Nancy complained. One minute she was whining that she was going to be late to work. The next she was yelling at him not to go so fast.

“If you’d remembered to fill your gas tank yesterday, I could still be in bed,” he said.

“Well, excuse me! I had my mind on getting your store-bought fried chicken to you before it cooled down,” she said as he slowed down to maneuver a curve. “When I think of all the times you’ve left your lights on and I’ve had to drive all the way back out here with the jumper cables…”

Aaron knocked her backward with his right arm as he slammed his foot down on the brakes. The truck skidded and screeched to a stop right before the bridge over Foxtail Creek.

“Oh my Lord,” Nancy gasped. “Did they get run over? Aaron, look at all the blood. Are they dead?”

“Call an ambulance,” Aaron told her, “Tell them it’s a bunch of people.”

And then he was out of his truck, running in a zig-zag path between the bodies and bicycles on the bridge, seeing if anybody was alive.

He had thought at first that they were all hit by some speeding vehicle, but one glance at the first body told him otherwise.

When Magnolia County Sheriff Sam Bailey arrived on the scene, Deputy Sheriff Skeet Borders had the road barricaded with his cruiser on one side of the bridge. On the other side, Aaron Twitchell had pulled his truck sideways across the road on the other side and was turning traffic back. Lt. Taneesha Hayes, who was the Sheriff’s second-in-command, was on her cell phone.

Sam saw three bodies—one man and two women, all in bright-colored form-fitting biking outfits with helmets strapped on. They were sprawled on the pavement of the bridge, their expensive bicycles at odd broken angles. Blood was splattered everywhere.

“I passed the ambulance,” he said to Taneesha. “Who’s in there?”

“Ricky Richards,” Taneesha said, “The guy who owns the gym. He’s lost a lot of blood from his leg, but Sonny thinks he’s got a chance. Aaron Twitchell was the first on the scene, and he made a tourniquet with his shirt. He says the other three were dead when he got here. The paramedics confirmed that. I’ve already called the coroner.”

Sam and Taneesha, like Aaron Twitchell and Skeet Borders, were small town people, familiar with every mile of their rural Georgia county, and – between them – they knew most of the people who lived there. That included the three who had just been murdered on the bridge over Foxtail Creek.

“That’s China Carson,” Taneesha said nodding toward the body of a slender young woman who was halfway over the handlebars of her bike. “I’ve seen her at the gym. She’s married to Russell Carson, the guy with Carson Cleaners. “

“That man over there is Jim Jordan,” Taneesha said. “I’ve met him at the gym, too. Works at Merchantsville City Hall, doesn’t he?”

“Yeah,” Sam said, “Director of Planning and Zoning. Moved here a couple of years ago. I think he’s single.”

“I’ve seen that other woman,” Taneesha said. “but I don’t know her name.”

“Annie Chapman,” Sam said, speaking quickly as Taneesha made notes. “She has grown children – a son and daughter. The son is named Andy. Last I heard he was still living with her.”

Sam, nodded, took out his cell phone, and called his office manager.

“Shellie,” he said when she picked up. “We’ve got a multiple shooting on Foxtail Creek Bridge. Three dead. One wounded. Don’t know where the shooter is. We need the Emergency Management volunteers to close Sumter Road at both ends. Call the District Attorney’s office and let T.J. Jackson know we need him here. He’ll know the others to call. Taneesha’s coming back in to start notifying families.”

Taneesha winced at hearing this.

Shellie, who usually chatted and kidded around with her boss, said, “Yes, Sir. Anything else?”

“Call Will Roy at the radio station and Hunter at the paper. Tell them about the closing of Sumter Road. Tell them I said there’s been a shooting incident. One wounded. Three fatalities. You don’t know the names. A search is underway for the shooter who is probably on foot, and should be considered armed and extremely dangerous. Anyone who’s seen anything out of the ordinary in the Sumter Road area should call the hotline number et cetera. Have you got all that?”

Sam made his way across the bridge, staying close to the railing. He stared down the creek, stepped over a fallen bicycle, and made his way to Aaron Twitchell, who was leaning against the hood of his truck. They had played basketball together for four years in high school. Sam, at six-two even then, was captain of the team, and Aaron, who was shorter, but fast as a bullet, was a guard.

Aaron was dressed in jeans and a t-shirt, with blood on both. He looked red-faced and sweaty. Sam could see Nancy Twitchell, crouched in one side of the truck, talking on her cellphone.

“Just got a little winded,” Aaron said. “I ain’t kept the weight off like you. This is awful, Sam. I did what I could for that Richards boy.”

“Looks like you did the right thing. They say he might make it,” Sam said, “Now tell me, did you hear any shots? Did you see anybody? Did anybody pass you while you were driving here?”

Sam knew already where the shooter must have been standing.

“No, I didn’t hear a thing. Had the windows up, and Nancy was hollerin’ about gettin’ to work. I don’t remember anybody passin’,” Aaron said. “Soon as I saw how it was just hopin’ the brakes would hold. I thought at first they had all been run over. You know, I’ve seen ’em ridin’ out here before.”

“Well,” Aaron said. “Not that girl, but the other three.”

“I think she’s one of the Jackson girls.”

Deputy Bub Williston pulled his cruiser up behind Aaron’s truck and got out.

“I put sawhorses and a detour sign up where Sumter meets 233,” he called out to Sam, “But we need somebody up there.”

“You and Nancy need to go somewhere safe,” Sam said to Aaron. “Your house is close to here as the crow flies, and we don’t know where this killer is. He could have been running toward your shed while you were driving here, so let’s not take any chances.

“We’ll be at her Mamma’s house,” Aaron said. He turned to get in his truck and then stopped.

“I know you know your job, Sam,” he said, “but I’d bet money the shooter was hiding under that the corner of the bridge right there and pulled hisself up by the railing right when they got to the other side. There was still some mist coming off the creek when we got here, and they probably didn’t even see him.”

“That’s pretty much what I was thinking,” Sam said, nodding.

“And one more thing,” Aaron said. “My daddy used to call this Snake Creek, ’cause it’s got a heap of water moccasins,” Aaron said. “Watch where you step.”

“Aaron,” he said, “How about coming in to see me first thing tomorrow morning? We’ve got to get a statement from you anyway, and if we haven’t gotten this thing figured out by then, I’m going to need to hire some extra help.”

The two young women were a study in opposites. Hunter, who was editor of the paper, wore a baggy light blue cotton shift topped with an oversized silk blouse. Her curly blond hair was escaping the scarf she had used to tie it back, and she had kicked off her shoes because her feet were swollen. Sam told her almost every morning that she was radiant and beautiful, but, for Hunter, there was something about being eight-and-a-half months pregnant that defied every effort at style.

Mallory was wearing her work uniform of jeans with a skinny black tee shirt. At 23, she still looked like a freckled-faced teenager when she didn’t bother with makeup. She had been a staff writer, and all-around computer whiz for the Messenger for the better part of a year.

They both knew something terrible had happened just a few miles away, and they had the bare bones information with more to come, but there wasn’t time to feel emotional. Like Sam and his team, they had a job to do.

Hunter was glad they had the website now. It was something that the owner, Tyler Bankston, had resisted for years, and still had some doubts about, but it was a way to get information out fast.

Her mind was already on the print edition that came out every Wednesday just after noon. She knew that the stories and photos she had planned to put on the front page were going to be moved to the inside pages because whatever had happened on Sumter Road would take over the paper.

If there were three fatalities, she thought, each one should have a picture and a story. If the one who was wounded died, that would mean a fourth. Always, she reminded herself, pay tribute to the victims. Make sure their value was known. Whoever they were, those stories would take going after.

And then there was a killer. That story, she knew, could go in more than one direction: He – and she did assume it was a man – could be still on the loose, or dead from a self-inflicted gunshot wound, or killed, or captured and charged. That was a story she’d have to wait for, and it was a story her husband would live through. There was one law enforcement agency in Magnolia County, and he was in charge of it.

Her back ached, but she barely noticed that as she sat back down and wondered how on earth four people had been shot on a creek bridge on a rural road.

Novena Baxter, who served as the Messenger’s Lifestyle Editor and Advertising Manager, opened the front door and came in, looking upset.

“Did y’all hear about that Ricky Richards getting shot?” she asked.

King Of Souls (Book 2) by Matthew Ballard
The Baby Agenda by Janice Kay Johnson
Moonlight on My Mind by Jennifer McQuiston
The Sweet Taste of Murder: An Angel Lake Mystery by CeeCee James
When the Body Says No: The Cost of Hidden Stress by Maté, Gabor
Scareforce by Charles Hough
The Lion in Autumn by Frank Fitzpatrick
The Siren Series 3: Brandon (A Siren Novel) by Eros, Marata
Before Sunrise by Diana Palmer
Murder in the Mystery Suite (A Book Retreat Mystery) by Ellery Adams
Our partner