Read Owned by the Outlaw Online

Owned by the Outlaw 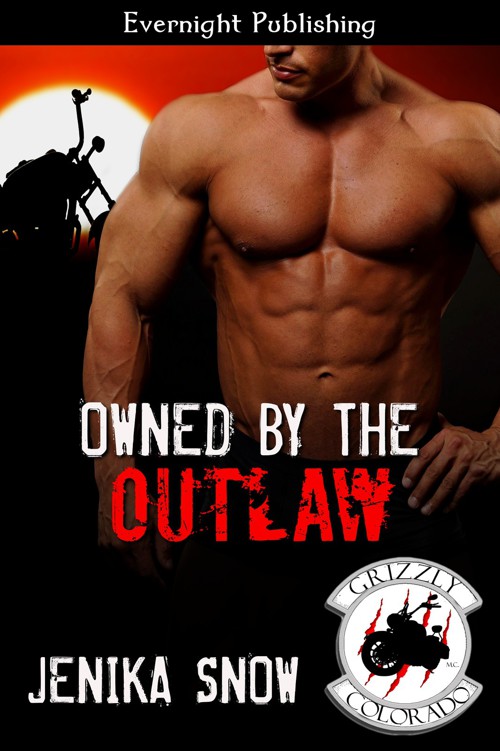 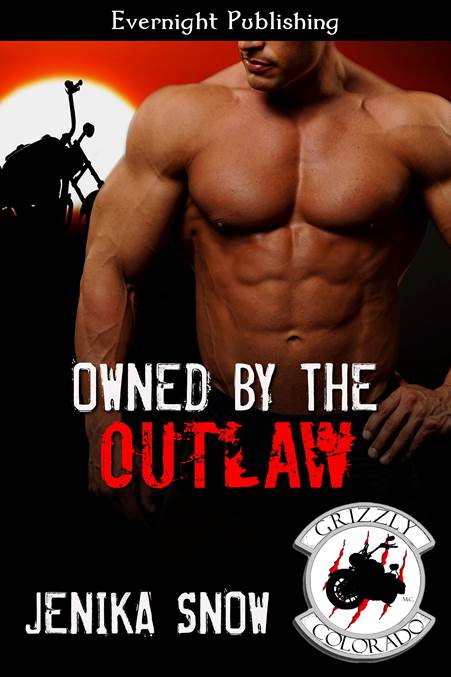 I want to thank the readers for
all their support in The Grizzly MC series. It is because of you that I keep
writing! Hopefully you'll continue on this journey with me!

OWNED BY THE OUTLAW

Well, she had to give The Brothers of Menace MC a
small amount of credit. Their whorehouse didn’t smell like women screwed here
all day long. It wasn’t the first place Molly Clark would have brought a bunch
former prostitutes that had been beaten by their pimp, but it was safe, and
Molly knew that if the members of The Brothers of Menace meant to take care of
someone, they did it with everything in them. They were fearsome, hardcore
outlaws that lived a life full of violence and danger. But even though they
were criminals they were also protective and made sure that the ones under
their protection were taken care of above all else.

Molly helped Kendra put the last of her
undergarments in the dresser and took a step
back
.
Although she didn’t agree with everything The Brothers did, she also knew it
wasn’t her place to argue about it, or care for that matter. She had gotten
here last night and spent all day helping the girls get settled, she was
exhausted. Most of the women here were pros when it came to selling themselves
but there were some, ones like Kendra, that shouldn’t be in this kind of work.
They should be at home working on their college essays and worrying about what
time their boyfriends were coming over.

But Molly wasn’t their mother she was in her
twenties herself with a three year old son to take care of. Even if she wanted
to stay here and help these girls she needed to get back home to Dakota, hold
him tight and let him know that she loved him. But she knew The Brothers would
call her again. Ever since they had branched out from their MCs and started
their own charter—along with their little pussy business on the side—they had
depended on her for her medical knowledge. She wasn’t a physician, but being a
nurse did allow her to help treat their wounds, which they got a shitload of by
being reckless and acting before they thought it out. They may only be humans,
but they were as dangerous and vicious as any shifter MC out there.

“Thank you so much,” Kendra said and gave her a
smile.

Molly knew that wasn’t her real name, but then again
she supposed if she was selling her body she wouldn’t have wanted others to
know who she was either. Kendra couldn’t have been more than twenty years old,
and underneath the bruises and swelling Molly knew she was a beautiful,
innocent girl. It was such a shame someone so full of life had resorted to this
lifestyle, but then again Molly’s upbringing hadn’t been the best, and
everyone’s life led in different directions. It was up to them to decide which
path they wanted to take and Kendra had chosen this path.

“You’re very welcome. Are you going to be okay?”
Molly wanted to reach out and take her hand, but she kept her distance because
she knew right now that was what Kendra wanted.

Kendra nodded and glanced around the room. It was
late, going on midnight, and Molly was dead on her feet. After treating all of
the superficial wounds on the women she had helped them settle in. Most were
already in bed, curled around each other and seeking comfort that they had probably
never gotten as children.

“Yeah, I guess I’m as good as any of them.” Kendra
lifted her hand to the girls that were cramped into this one particular room.

The house where Lucien and his men sold pussy was
large with numerous rooms on the upper and lower levels of the cabin, and even
a couple in the basement. This wasn’t a brothel, not really. Molly knew enough
that a lot of politically powerful people, or men with loads of money paid an
exorbitant amount to sleep with the girls that The Brothers of Menace provided.
But the girls that were on Lucien’s payroll were not like the girls that he
currently had housed up in this cabin. For one thing they were more like
treasured pets that he and his crew protected. Yeah, they sold them off to the
highest bidders, but the women were consenting, had sought him out for work,
and knew that being employed by this MC meant they would never be beaten. But
he didn’t have room for these additional women, and that meant fixing up the
cabin that they had talked about with the Grizzly MC. She hoped that became a
reality sooner rather than later, because these ladies needed a place to
recuperate and decide where they were going to go in their lives.

“Okay, well, get some rest.” Molly walked over to
her purse that was on the dresser and reached inside for a slip of paper and a
pen. She wrote her number down and turned to hand it to Kendra. “Of course The
Brothers can always get a hold of me if you need anything, but just in case…”
She gestured for Kendra to take it again when the young woman just stared at
it.

Finally Kendra reached out and took it, looked down
at the slip of paper, and stared at it for a few seconds. “Thank you...” She
lifted her head and looked at Molly. “…for everything.”

“If you ever just want to talk, about anything at
all, call me anytime.” Molly smiled. “Take care.” She had offered up her number
and an outlet if Kendra needed anything, but it was up to her to make the next
move. The other women were offered the same outlet, but Molly felt something different
for Kendra. It was almost like she had this motherly instinct to watch over
her. She was by far the youngest, most impressionable, and innocent. Molly
turned around and left, closing the door behind her. The rooms were on the
upper level, and as soon as she stepped out onto the hallway the sound of deep
male voices swearing and talking came through loud and clear.

Molly descended the stairs and when she reached the
landing she contemplated just heading back to Brighton. That was a long drive,
it was late, and more than likely she’d fall asleep at the wheel.

“Everyone good up there?”
Malice’s voice came from right behind her.

She turned and faced her ex-boyfriend and the father
of her son. “Yeah, they’re good.”

Trevor “Malice” Mason was big and intimidating, and
the epitome of what she thought a Sergeant at Arms—an enforcer—of a motorcycle
club would look like. The five years she had known him hadn’t changed his
appearance in the slightest. His black hair was tied at the nape of his neck.
It was long enough to secure with a band but still short enough that a few
strands escaped the bond and brushed his jaw line. His grey eyes were hard and
unyielding, his dark beard trimmed and made him seem almost menacing, and his
body was big and tall and packed with so much muscle he was like a tank. But
despite all of his strength, and the fact more times than not he was stoic and
apathetic, when they had been together she had glimpsed a little side to him
that she knew he had never showed anyone else.

She had been in love with him once and still loved
him because he was Dakota’s father, but they led very different lives. He had
hardly been around, and when he had been he was distracted with club business.
She felt more like she lived with a roommate than a companion to share her life
with, and because of that they had drifted apart until she had finally ended it
a year and a half ago. But Malice wasn’t the type of man that took being left
well and his persistence that they belonged together had gotten to the point that
she had resorted to putting distance between them for a long time. Malice
wasn’t a stupid man, and it wasn’t that he didn’t understand she just didn’t
want to be with him anymore.

If Onions Could Spring Leeks by Paige Shelton
Ice Cream Mystery by Gertrude Chandler Warner
The Witch of Stonecliff by Dawn Brown
Legally Bound 4: Allegations of Love by Blue Safire
Thunderbird by Jack McDevitt
Eagles at War by Ben Kane
Life Is Not a Reality Show by Kyle Richards
My Second Life by Faye Bird
Epilogue by Anne Roiphe
An Undeclared War (Countdown to Armageddon Book 4) by Darrell Maloney
Our partner