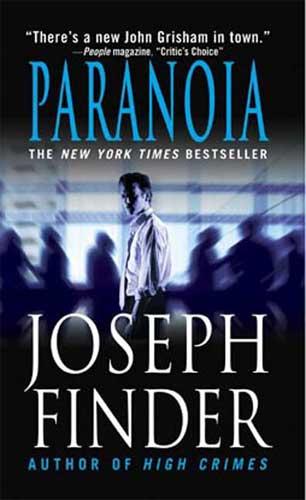 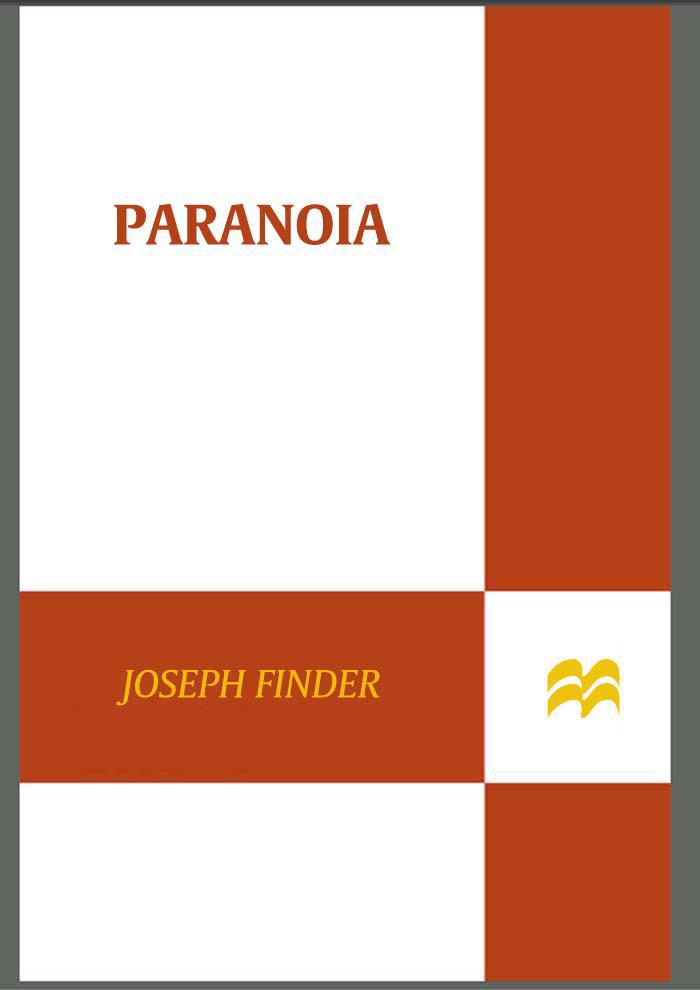 Red Carpet: The Connection Between the Kremlin
and America’s Most Powerful Businessmen

PARANOIA
. Copyright © 2004 by Joseph Finder. All rights reserved. Printed in the United States of America. No part of this book may be used or reproduced in any manner whatsoever without written permission except in the case of brief quotations embodied in critical articles or reviews. For information, address St. Martin’s Press, 175 Fifth Avenue, New York, N.Y. 10010.

Grateful acknowledgment is made for permission to reprint the following material: “Band on the Run.” Words and Music by McCartney. © 1974 Paul and Linda McCartney. Administered by MPL Communications, Inc. All Rights Reserved.

This one’s for Henry: brother and consigliere
and, as always, for the two girls in my life:
my wife, Michele, and my daughter, Emma.

PART ONE
T
HE
F
IX

Fix:
A CIA term, of Cold War origin, that refers to a person who is to be compromised or blackmailed so that he will do the Agency’s bidding.

—The Dictionary of Espionage

Until the whole thing happened, I never believed the old line about how you should be careful what you wish for, because you might get it.

I believe it now.

I believe in all those cautionary proverbs now. I believe that pride goeth before a fall. I believe the apple doesn’t fall far from the tree, that misfortune seldom comes alone, that all that glitters isn’t gold, that lies walk on short legs. Man, you name it. I believe it.

I could try to tell you that what started it all was an act of generosity, but that wouldn’t be quite accurate. It was more like an act of stupidity. Call it a cry for help. Maybe more like a raised middle finger. Whatever, it was my bad. I half thought I’d get away with it, half expected to be fired. I’ve got to say, when I look back on how it all began, I marvel at what an arrogant prick I was. I’m not going to deny that I got what I deserved. It just wasn’t what I expected—but who’d ever expect something like this?

All I did was make a couple of phone calls. Impersonated the VP for Corporate Events and called the fancy outside caterer that did all of Wyatt Telecom’s parties. I told them to just make it exactly like the bash they’d done the week before for the Top Salesman of the Year award. (Of course, I had no idea how lavish that was.) I gave them all the right disbursement numbers, authorized the transfer of funds in advance. The whole thing was surprisingly easy.

The owner of Meals of Splendor told me he’d never done a function on a company loading dock, that it presented “décor challenges,” but I knew he wasn’t going to turn away a big check from Wyatt Telecom.

Somehow I doubt Meals of Splendor had ever done a retirement party for an assistant foreman either.

I think that’s what really pissed Wyatt off. Paying for Jonesie’s retirement party—a
loading dock guy, for Christ’s sake!
—was a violation of the natural order. If instead I’d used the money as a down payment on a Ferrari 360 Modena convertible, Nicholas Wyatt might have almost understood. He would have recognized my greed as evidence of our shared humanity, like a weakness for booze, or “broads,” as he called women.

If I’d known how it would all end up, would I have done it all over again? Hell, no.

Still, I have to say, it was pretty cool. I was into the fact that Jonesie’s party was being paid for out of a fund earmarked for, among other things, an “offsite” for the CEO and his senior vice presidents at the Guanahani resort on the island of St. Barthélemy.

I also loved seeing the loading dock guys finally getting a taste of how the execs lived. Most of the guys and their wives, whose idea of a splurge was the Shrimp Feast at the Red Lobster or Ribs On The Barbie at Outback Steakhouse, didn’t know what to make of some of the weird food, the osetra caviar and saddle of veal Provençal, but they devoured the filet of beef en croûte, the rack of lamb, the roasted lobster with ravioli. The ice sculptures were a big hit. The Dom Perignon flowed, though not as fast as the Budweiser. (This I called right, since I used to hang out on the loading dock on Friday afternoons, smoking, when someone, usually Jonesie or Jimmy Connolly, the foreman, brought in an Igloo of cold ones to celebrate the end of another week.)

Jonesie, an old guy with one of those weathered, hangdog faces that make people like him instantly, was lit the whole night. His wife of forty-two years, Esther, at first seemed standoffish, but she turned out to be an amazing dancer. I’d hired an excellent Jamaican reggae group, and everyone got into it, even the guys you’d never expect to dance.

This was after the big tech meltdown, of course, and companies everywhere were laying people off and instituting “frugality” policies, meaning you had to pay for the lousy coffee, and no more free Cokes in the break room, and like that. Jonesie was slated to just stop work one Friday, spend a few hours at HR signing forms, and go home for the rest of his life, no party, no nothing. Meanwhile, the Wyatt Telecom E-staff was planning to head down to St. Bart’s in their Learjets, boink their wives or girlfriends in their private villas, slather coconut oil on their love handles, and discuss companywide frugality policies over obscene buffet breakfasts of papayas and hummingbird tongues. Jonesie and his friends didn’t really question too closely who was paying for it all. But it did give me some kind of twisted secret pleasure.

Until around one-thirty in the morning, when the sound of electric guitars and the screams of a couple of the younger guys, blotto out of their minds, must have attracted the curiosity of a security guard, a fairly new hire (the pay’s lousy, turnover is unbelievable) who didn’t know any of us and wasn’t inclined to cut anyone any slack.

He was a pudgy guy with a flushed, sort of Porky Pig face, barely thirty. He just gripped his walkie-talkie as if it were a Glock and said, “What the hell?”

And my life as I knew it was over.

The voice mail was waiting for me when I got in to work, late as usual.

Even later than usual, actually. I felt queasy and my head thudded and my heart was going too fast from the giant cup of cheap coffee I’d gulped down on the subway. A wave of acid splashed over my stomach. I’d considered calling in sick, but that little voice of sanity in my head told me that after the events of last night the wiser thing to do was to show up at work and face the music.

Thing is, I fully expected to get fired—almost looked forward to it, the way you might both dread and look forward to having an aching tooth drilled. When I came out of the elevator and walked the half-mile through the lower forty of the cubicle farm to my workstation, I could see heads popping up, prairie-dog style, to catch a glimpse of me. I was a celebrity; the word was out. E-mail was no doubt flying.

My eyes were bloodshot, my hair was a mess, I looked like a walking
JUST SAY NO
public service spot.

The little LCD screen display on my IP phone said, “You have eleven voice mails.” I put it on speaker and zipped through them. Just listening to the messages, frantic and sincere and wheedling, increased the pressure behind my eyeballs. I got out the Advil bottle from the bottom desk drawer and dry-swallowed two. That made six Advils already this morning, which exceeded the recommended maximum. So what could happen to me? Die from an ibuprofen overdose just moments before being fired?

I was a junior product line manager for routers in our Enterprise Division. You don’t want the English translation, it’s too mind-numbingly boring. I spent my days hearing phrases like “dynamic bandwidth circuit emulation service” and “integrated access device” and “ATM backbones” and “IP security tunneling protocol,” and I swear I didn’t know what half the shit meant.

A message from a guy in Sales named Griffin, calling me “big guy,” boasting of how he’d just sold a couple dozen of the routers I was managing by assuring the customer that they’d have a particular feature—extra multicast protocols for live video streaming—that he knew damned well it didn’t have. But it sure would be nice if the feature was added to the product, like maybe in the next two weeks, before the product was supposed to ship. Yeah, dream on.

A follow-up call five minutes later from Griffin’s manager just “checking on the progress of the multicast protocol work we heard you’re doing,” as if I actually did the technical work myself.

And the clipped, important voice of a man named Arnold Meacham, who identified himself as Director of Corporate Security and asked me to please “come by” his office the moment I got in.

I had no idea who Arnold Meacham was, beyond his title. I’d never heard his name before. I didn’t even know where Corporate Security was located.

It’s funny: when I heard the message, my heart didn’t start racing like you might expect. It actually slowed, as if my body knew the gig was up. There was actually something Zen going on, the inner serenity of realizing there’s nothing you can do anyway. I almost luxuriated in the moment.

For a few minutes I stared at my cubicle walls, the nubby charcoal Avora fabric that looked like the wall-to-wall in my dad’s apartment. I kept the panel walls free of any evidence of human habitation—no photos of the wife and kids (easy, since I didn’t have any), no Dilbert cartoons, nothing clever or ironic that said I was here under protest, because I was way beyond that. I had one bookshelf, holding a routing protocol reference guide and four thick black binders containing the “feature library” for the MG-50K router. I would not miss this cubicle.

Besides, it wasn’t like I was about to get shot; I’d
already
been shot, I figured. Now it was just a matter of disposing of the body and swabbing up the blood. I remember once in college reading about the guillotine in French history, and how one executioner, a medical doctor, tried this gruesome experiment (you get your kicks wherever you can, I guess). A few seconds after the head was lopped off he watched the eyes and lips twitch and spasm until the eyelids closed and everything stopped. Then he called out the dead man’s name, and the eyes on the decapitated head popped open and stared right at the executioner. A few seconds more and the eyes closed, then the doctor called the man’s name again, and the eyes came open again, staring. Cute. So thirty seconds after being separated from the body, the head’s still reacting. This was how I felt. The blade had already dropped, and they’re calling my name.

Atherton #3: The Dark Planet (No. 3) by Patrick Carman
Uncle Janice by Matt Burgess
13 Hours: The Inside Account of What Really Happened in Benghazi by Mitchell Zuckoff
Showdown in Crittertown by Justine Fontes
The Spy Catchers of Maple Hill by Megan Frazer Blakemore
Their Forever Home by Marla Monroe
Railroad Man by Alle Wells
Long Way Gone by Charles Martin
No Hope In New Hope (Samantha Jamison Mystery Book 7) by Edelheit, Peggy A.
The Potioneer (Shadeborn Book 3) by K.C. Finn
Our partner