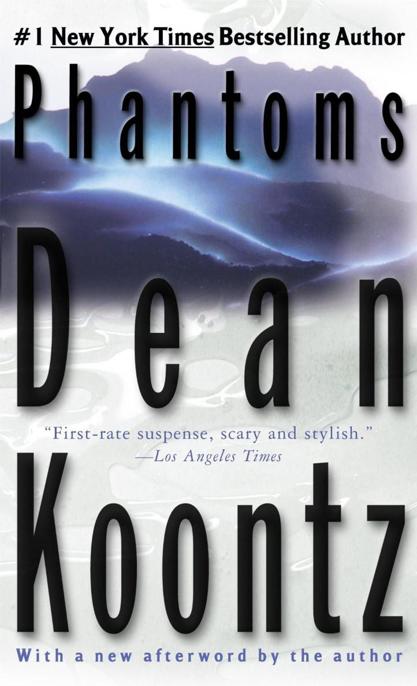 Table of Contents
Title Page
Copyright Page
Dedication
PART ONE - VICTIMS
Chapter 1 - The Town Jail
Chapter 2 - Coming Home
Chapter 3 - The Dead Woman
Chapter 4 - The House Next Door
Chapter 5 - Three Bullets
Chapter 6 - Novelties and Notions
Chapter 7 - The County Sheriff
Chapter 8 - Barricades
Chapter 9 - A Call for Help
Chapter 10 - Sisters and Cops
Chapter 11 - Exploring
Chapter 12 - Battleground
Chapter 13 - Suddenly
Chapter 14 - Containment
Chapter 15 - The Thing at the Window
Chapter 16 - Out of the Dark
Chapter 17 - The Hour Before Midnight
Chapter 18 - London, England
Chapter 19 - The Dead of Night
Chapter 20 - Bodysnatchers
PART TWO - PHANTOMS
Chapter 21 - The Big Story
Chapter 22 - Morning in Snowfield
Chapter 23 - The Crisis Team
Chapter 24 - Cold Terror
Chapter 25 - Questions
Chapter 26 - London, England
Chapter 27 - Escape
Chapter 28 - Body Count
Chapter 29 - On the Run
Chapter 30 - Some Answers More Questions
Chapter 31 - Computer Games
Chapter 32 - Destiny
Chapter 33 - Phantoms
Chapter 34 - Saying Goodbye
Chapter 35 - Pandemonium
Chapter 36 - Face to Face
Chapter 37 - Ego
Chapter 38 - A Fighting Chance
Chapter 39 - The Apparition
Chapter 40 - Biological Warfare
Chapter 41 - Lucifer
Chapter 42 - The Other Side of Hell
Chapter 43 - Apostles
Chapter 44 - Victory?
Chapter 45 - Good and Evil
A Note to the Reader
AFTERWORD
“First-rate . . . scary and plausible.”
—
Publishers Weekly
CLOSER . . .
They found the town silent, apparently abandoned. Then they found the first body strangely swollen and still warm. One hundred fifty were dead, 350 missing. But the terror had only begun in the tiny mountain town of Snowfield, California.
AND CLOSER
. . .
At first they thought it was the work of a maniac. Or terrorists. Or toxic contamination. Or a bizarre new disease.
AND CLOSER . . .
But then they found the truth. And they saw it in the flesh. And it was worse than anything any of them had ever imagined. . . .
PHANTOMS
Praise for
Phantoms
by
Dean Koontz
“Phantoms
is gruesome and unrelenting. It has atmosphere, character, and story. I couldn’t let it alone until I was done. It’s well realized, intelligent, and humane.”
—Stephen King
“First-rate suspense, scary and stylish.”
—Los Angeles Times
“Stunning.
Phantoms
is an instant classic.”
—Chicago Sun-Times
“Koontz has outdone himself. A terrifying story.”
—Philadelphia Daily News
“First-rate . . . scary and plausible. The characters seem real as they wage a desperate struggle against their malevolent foe.”
—
Publishers Weekly
“Entertaining . . . a hefty page-turner good for a weekend of fright.”
—
Library Journal
“A beautifully written novel of suspense and terror. Koontz’s writing does not labor along—it races.”
—Copley News Service
“Koontz brings the reader immediately to the sleepless edge of his seat and keeps him there. The gleam of technology and science suffuses a tale that so easily could have been lost in mysticism. Here, indeed, is the primal night scream redefined in a new setting, and again and again I found myself thinking, ‛What a movie this could make!’ ”
—
Analog
“A rousingly good tale, in parts exquisitely horrific, well paced, and quite satisfying.”
—
Richmond News Leader
“Skillfully sustained. Read it with the doors locked.”
—
Yorkshire Post
“Koontz has penned a first-rate thriller guaranteed to keep even the least curious reader turning the pages. The book is a grabber . . . riveting narrative power . . . you will read with nail-biting compulsion.”
—
Bestsellers
Berkley titles by Dean Koontz
THE EYES OF DARKNESS
THE KEY TO MIDNIGHT
MR. MURDER
THE FUNHOUSE
DRAGON TEARS
SHADOWFIRES
HIDEAWAY
COLD FIRE
THE HOUSE OF THUNDER
THE VOICE OF THE NIGHT
THE BAD PLACE
THE SERVANTS OF TWILIGHT
MIDNIGHT
LIGHTNING
THE MASK
WATCHERS
TWILIGHT EYES
STRANGERS
DEMON SEED
PHANTOMS
WHISPERS
NIGHT CHILLS
DARKFALL
SHATTERED
THE VISION
THE FACE OF FEAR
This is a work of fiction. Names, characters, places, and incidents are either the product of the author’s imagination or are used fictitiously, and any resemblance to actual persons, living or dead, business establishments, events, or locales is entirely coincidental.
PHANTOMS
A Berkley Book / published by arrangement with the author
All rights reserved.
Copyright © 1983 by Dean Koontz.
Afterword copyright © 2002 by Dean Koontz.
This book,or parts thereof, may not be reproduced
in any form without permission.
For information address: The Berkley Publishing Group,
a division of Penguin Putnam Inc.,
375 Hudson Street, New York, New York 10014.
eISBN : 978-1-440-62017-1
BERKLEY
®
Berkley Books are published by The Berkley Publishing Group,
a division of Penguin Putnam Inc.,
375 Hudson Street, New York, New York 10014.
BERKLEY and the “B” design
are trademarks belonging to Penguin Putnam Inc.

This book is dedicated to
the one who is always there,
the one who always cares,
the one who always understands,
the one like whom there is no other:
Gerda,
my wife and my best friend.
PART ONE
VICTIMS
Fear came upon me, and trembling.
The Book of Job,
4:14
The civilized human spirit . . . cannot get rid of a feeling of the uncanny.
Dr. Faustus,
Thomas Mann
1
The Town Jail
The scream was distant and brief. A woman’s scream.
Deputy Paul Henderson looked up from his copy of
Time.
He cocked his head, listening.
Motes of dust drifted lazily in a bright shaft of sunlight that pierced one of the mullioned windows. The thin, red second hand of the wall clock swept soundlessly around the dial.
The only noise was the creak of Henderson’s office chair as he shifted his weight in it.
Through the large front windows, he could see a portion of Snowfield’s main street, Skyline Road, which was perfectly still and peaceful in the golden afternoon sunshine. Only the trees moved, leaves aflutter in a soft wind.
After listening intently for several seconds, Henderson was not sure he had actually heard anything.
Imagination, he told himself. Just wishful thinking.
He almost would have preferred that someone
had
screamed. He was restless.
During the off season, from April through September, he was the only full-time sheriff’s deputy assigned to the Snowfield substation, and the duty was dull. In the winter, when the town was host to several thousand skiers, there were drunks to be dealt with, fistfights to be broken up, and room burglaries to be investigated at the inns, lodges, and motels where the skiers stayed. But now, in early September, only the Candleglow Inn, one lodge, and two small motels were open, and the natives were quiet, and Henderson—who was just twenty-four years old and concluding his first year as a deputy—was bored.
He sighed, looked down at the magazine that lay on his desk—and heard another scream. As before, it was distant and brief, but this time it sounded like a man’s voice. It wasn’t merely a shriek of excitement or even a cry of alarm; it was the sound of terror.
Frowning, Henderson got up and headed toward the door, adjusting the holstered revolver on his right hip. He stepped through the swinging gate in the railing that separated the public area from the bull pen, and he was halfway to the door when he heard movement in the office behind him.
That was impossible. He had been alone in the office all day, and there hadn’t been any prisoners in the three holding cells since early last week. The rear door was locked, and that was the only other way into the jail.
When he turned, however, he discovered that he wasn’t alone any more. And suddenly he wasn’t the least bit bored.
2
Coming Home
During the twilight hour of that Sunday in early September, the mountains were painted in only two colors: green and blue. The trees—pine, fir, spruce——looked as if they had been fashioned from the same felt that covered billiard tables. Cool, blue shadows lay everywhere, growing larger and deeper and darker by the minute.
Behind the wheel of her Pontiac Trans Am, Jennifer Paige smiled, buoyed by the beauty of the mountains and by a sense of homecoming. This was where she belonged.
She turned the Trans Am off the three-lane state road, onto the county-maintained, two-lane blacktop that twisted and climbed four miles through the pass to Snowfield.
In the passenger seat, her fourteen-year-old sister, Lisa, said, “I love it up here.”
“So do I.”
“When will we get some snow?”
“Another month, maybe sooner.”
The trees crowded close to the roadway. The Trans Am moved into a tunnel formed by overhanging boughs, and Jenny switched on the headlights.
“I’ve never seen snow, except in pictures,” Lisa said.
“By next spring, you’ll be sick of it.”
“Never. Not me. I’ve always dreamed about living in snow country, like you.”
Jenny glanced at the girl. Even for sisters, they looked remarkably alike: the same green eyes, the same auburn hair, the same high cheekbones.
“Will you teach me to ski?” Lisa asked.
“Well, honey, once the skiers come to town, there’ll be the usual broken bones, sprained ankles, wrenched backs, torn ligaments . . . I’ll be pretty busy then.”
“Oh,” Lisa said, unable to conceal her disappointment.
“Besides, why learn from me when you can take lessons from a real pro?”
“A pro?” Lisa asked, brightening somewhat.
“Sure. Hank Sanderson will give you lessons if I ask him.”
“Who’s he?”
“He owns Pine Knoll Lodge, and he gives skiing lessons, but only to a handful of favored students.”
“Is he your boyfriend?”
Jenny smiled, remembering what it was like to be fourteen years old. At that age, most girls were obsessively concerned about boys, boys above all else. “No, Hank isn’t my boyfriend. I’ve known him for two years, ever since I came to Snowfield, but we’re just good friends.”
They passed a green sign with white lettering: SNOWFIELD—3 MILES.
“I’ll bet there’ll be lots of really neat guys my age.”
“Snowfield’s not a very big town,” Jenny cautioned. “But I suppose you’ll find a couple of guys who’re neat enough.”
“Oh, but during the ski season, there’ll be dozens!”
“Whoa, kid! You won’t be dating out-of-towners—at least not for a few years.”
“Why won’t I?”
“Because I said so.”
“But why not?”
“Before you date a boy, you should know where he comes from, what he’s like, what his family is like.”
“Oh, I’m a terrific judge of character,” Lisa said. “My first impressions are completely reliable. You don’t have to worry about me. I’m not going to hook up with an ax murderer or a mad rapist.”