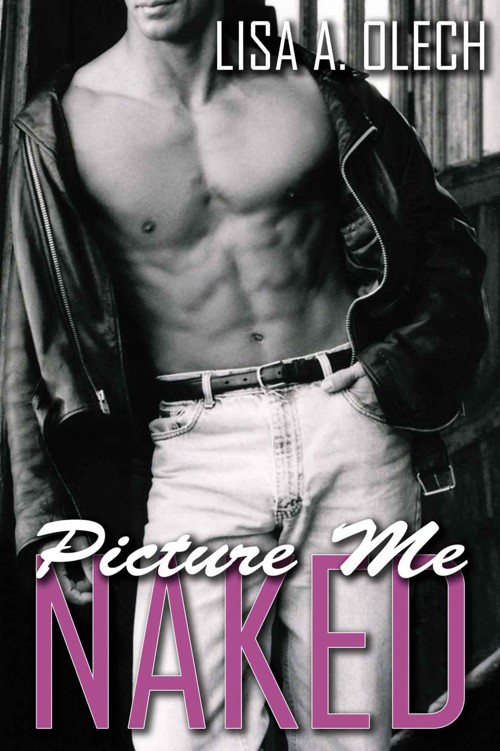 To Jon, Ben and Tim

My heart, my purpose, my men.

for Anne, who believed.

There have been so many hands that have touched this book and seen it become the best that it can be.

First, to life model, Mike Molino, whose generosity with my early research helped mold Jagger into the wonderful character he is.

To the Saturday Morning Life Group—“I see naked people”—whose classroom inspired me to write this book.

I also want to thank Kathy, Lee Ann, Christyne, Nancy, Sandy, Suzanne, Jill, Janet, Theresa, Sarah, Dianne, and others who have read and reread and reread for me. Thank you for not putting me in a rubber room.

Thanks to Cindy, who added the final polish.

And to “Monty,” you know who you are and why I’m thanking you!

And last but certainly not least, to my men, who never once let me give up my dream and supported me every day in every way. I love you all.

“Come on, darling. You handsome thing,” Zee purred low with a sex-kitten huskiness to her voice. “Do it. Do it for me? Please?
I need you…now.” She ran her fingertips over the smooth knob, grasping at the shaft beneath. She wriggled with impatience. “Come on, George, baby, I’ll be good. Come on, do it.” She tried once more without success. “Damn you,” she snapped. “Dammit, car. Start!”

Z. Z. Lambert fought to keep from pumping the gas pedal and flooding her ancient, dishwater-blue Toyota. She slapped the steering wheel with the heel of her hand, checked her watch, and took one deep, calming breath.

“Don’t do this to me. I can’t be late, not today.” The finalist review schedule for the Meade Fellowship was due and just the thought of it made her nauseous. She stroked the dashboard in a loving gesture, jiggled the stick shift again to make sure she was in Neutral, and pushed her left foot down on the clutch. Holding her breath, Zee gave the key another turn. The engine whirred and whirred and whirred, coughed and sputtered. It finally caught, and rumbled into the realm of the living. The muffler shuddered beneath her. She placed a fingered kiss on the rearview mirror. “Thank you,
Georgie
.”

Zee maneuvered the car out of its parking space and headed off to her eight o’clock advanced life drawing class to be followed by a full day in the studio. The pace was tough, but it would be worth it if she could secure this fellowship and finish her degree on time.

The Albert Meade Scholarship was why Zee had become an artist to begin with. Winning the fellowship would allow her to give back what the program had given her years ago. It would let her bring art classes to those children whose school’s art programs were being cut due to the economy, and afford her the resources she’d need to continue her own work.

All that stood in the way was the board’s review, which meant a studio tour of her latest work. According to the email sent to the school, this deciding event could occur three weeks from now or some time during the next three months. Way to narrow that down, Sir Albert!

The stress of that combined with a personal life that had imploded, and a New England winter that topped the record books in cold and snow—it was all beginning to get to her. As she passed through the quiet town of Stoddard, she noted the shrinking of the dirty snowbanks into sandy muck and prayed for spring to hurry up and get here. Like any other small lake town in New Hampshire, Stoddard was stunning in the fall, and equally beautiful in the spring and summer. But those few months of winter, followed by mud season…you could keep those.

“I just want a little quiet, George, and to be warm again. Is that too much to ask?” Zee cranked the heat up and checked her rearview mirror, blowing an obstinate curl off her forehead. The steering wheel was like an icicle. “What do you say, you and me and Isabella Rossellini tucked away somewhere nice…maybe on a beach of a deserted tropical island. I could have a little studio. A place of my own where I could paint all day and the rest of the world could go away.”

Zee slowed at a stop sign and the car coughed in response. “Don’t you dare stall on me, George, we’re late enough.”

If she could just keep George going a few more months, she’d be set. The car had run fine while she dated Ed Zeigler. Ed, her obnoxious ex-boyfriend, was one hell of a mechanic. He could fix anything—except his sterling personality. She thought about Ed’s last message on her answering machine:
I’ll do whatever I have to do to get you back.
He was scaring her with his persistent phone calls, and she’d twice found notes tucked under George’s wiper blades. Ed was no dummy when it came to spark plugs and fan belts, but her repeated insistence that things were over between them seemed to elude him. And now, he’d sunk low enough to sic her insane mother on her.
Give me a break.

Zee checked her watch again. It was 7:52. Hopefully, Genevieve wouldn’t steal her favorite space by the back corner. Sure, it wasn’t the only good spot in class, but Zee was a bit—what was the word—particular…anal? Her best friend, Leah, would say the latter. So she had a thing about where she liked to set up. The natural light was the best in her little corner spot. That didn’t make her crazy. Zee preferred the term quirky.

Tapping her fingers in nervous succession between shifts, she swore under her breath. Now she’d lose her spot and have to rush.
Damn.

It was the first day of the term, and that meant a new model. Today they’d work quick sketches, so Zee wouldn’t have to set up her palette. That was good news considering the way the morning was going. She cursed again as the traffic light turned red. Stoddard only had one light, and she could count on one hand the number times she’d sailed through on green. “Come on!”

Zee zipped George into his favorite parking spot in front of an impressive stone building. Juggling a drawing board and king-sized sketchpad always felt like she was moving a mattress. The wind tried to turn her into a kite as she struggled with the heavy oak doors and raced up the stairs of the Kramer building at the Stoddard School of Art.

The live model studios were on the second floor, supposedly to discourage peeping Toms or Tom-ettes. In her overloaded stumble, she barely noticed the worn dips in the wide marble steps carved from generations of feet running up these stairs. The new display of artwork in the corridor would have to wait, as well.

“There you are.” Leah waved at her from across the room. She’d snagged two easels next to the supply closet, near the drippy wash sink that was probably white at one time or another before scores of artists stained it with every color to have ever come in a paint tube. Leah pulled her long dark hair into a ponytail and tugged her snug Hello Kitty tee back down to hide her bellybutton ring.

Was it wrong to have abs envy? Zee secretly wished she was brave enough to pierce something other than her earlobes. “Hey, Leah.”

“I thought you were going to be here early.”

Zee stopped short of dumping all her things onto the floor. “George had a rough morning.”

Leah smirked. “Good old George. When are you going to shoot him and put him out of his misery?”

“Shh. He’ll hear you. I don’t know what’s wrong. I need to find another mechanic.”

“Whatever you do, don’t ask your mother.”

Zee grimaced. “No chance of that.” She slipped her drawing board onto the heavy steel easel and adjusted the height bar. “Has anyone said anything about the Meade list yet?”

“This waiting is driving me nuts.” Zee began setting out her things. “Have you heard anything about the new model?”

“Just that he’s a
he
.” Leah sipped at a hot pink travel mug, no doubt filled with her triple-shot espresso that Leah referred to as “elephant-speed.”

Leah lowered her voice. “Let’s hope he’s better than the last guy poser we had. Remember him? Man, was he ugly.”

“We’re artists. We see beauty in everything.”

“Is that why you spent the last two weeks of his session drawing just his hands and feet?”

“I needed the practice,” defended Zee.

“It couldn’t have anything to do with the fact he was a short, no-ass, paunchy hobbit of a man complete with a monkey-butt bald spot.” Leah dropped her voice to barely a whisper, “Not to mention the worst looking set of
junk
I’ve ever seen.”

Zee grimaced at the memory. “Aren’t you glad you work in abstract?”

“Even in abstract, it was ugly junk.”

Leah shrugged. “Maybe I am, but I know ugly when I see it.”

Zee finished setting up her worktable. A quick look about the room told her everyone was there. It was a small class with only eight artists. They’d known each other for years. Zee loved how they all had their own unique styles.

The space-stealing Genevieve worked in small watercolor miniatures, some no larger than postage stamps. Leah’s specialty was abstract pastels. There were Sam and Emily, the two sculptors of the group. Geoffrey. His nudes were beautiful studies in sepia done on huge canvases. Friendly Jessica worked with pen and ink. Carl’s work reminded Zee of Toulouse Lautrec. And she, of course, worked primarily with oils.

But today wasn’t for paints. Zee arranged charcoal sticks and pencils in the order of hardness after sharpening each ebony tip into a point using a paddled sandpaper sharpener. She lowered the heavy steel easel a bit more to adjust to her stature and clipped her pad to her drawing board. Closing her eyes, she took a few deep breaths to settle the harried feelings from this morning’s worries. The conversations around the room melted into a low hum as she brought her focus inward to the blank page, the waiting charcoal, her hands. Kneading the gray gum eraser hypnotically, Zee found her zone.
Ahhh.

Minutes passed. Conversations got louder.
Shouldn’t we be starting?
Zee checked her watch. Ten after eight. Evidently, the model was running late this morning, too.

As if conjured by her thoughts, a shaggy-haired male hurried through the door.

“G’day.” He scanned the room and smiled. “Ah, some fine sheilas to start my morning. Oh, beg pardon… mates too, no offense. Sorry for being late.” He winked. “Had an overnight that wouldn’t leave without another bit of persuasion, if ye gather what I mean.”