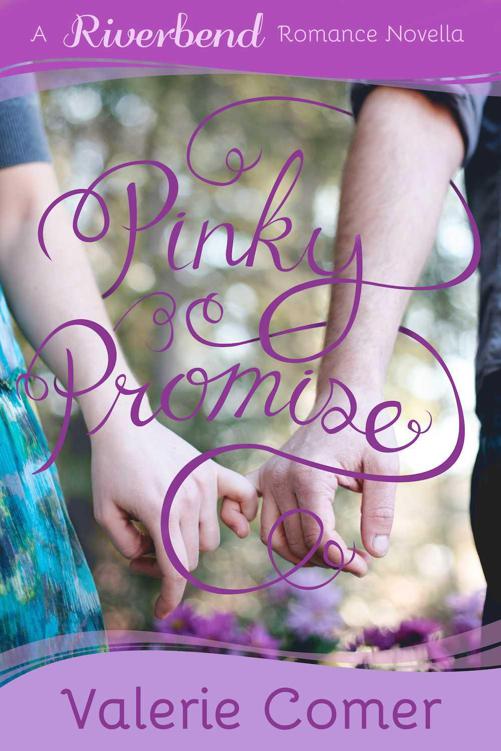 No part of this publication may be reproduced or transmitted for commercial purposes, except for brief quotations in printed or electronic reviews, without written permission of the author.

This is a work of fiction set in a redrawn southeastern BC, Canada. Any resemblance to real events or to actual persons, living or dead, is coincidental.

For the latest news on sales and releases for

Riverbend, BC, is the quaint Canadian town you wish you were from, where everyone knows everyone, seasons are celebrated, and love is in the air.

Riverbend and Castlebrook are fictional communities.

In Canada, a stocking cap or beanie is called a tuque (rhymes with fluke). Distance is measured in meters and kilometers, and temperatures are in Celsius. And in British Columbia, yes, beginning drivers are required to have a magnetic L (for learners, first level) or N (for novice, second level) on the back of the vehicle.

Chef Lindsey Solberg agrees to cater the church’s Valentine’s Day fundraising banquet as a favor to her teen sister, but she’s shocked to discover the bad boy from her high school days is now Riverbend’s youth pastor. Seriously? How could he have changed that much?

Nick Harrison has prayed for years for an opportunity to make amends. Now Lindsey’s back in Riverbend and won’t give him the time of day. What’s a guy to do except leave a trail of gifts from a secret admirer?

Lindsey’s heart takes a beating when she realizes the boy who was never good enough is now a far better man than she deserves.

Kelly Bryant’s young daughter wants a daddy and sets her sights on her new best friend’s single father. The man may be charming, sweet, and a believer, but Kelly is embarrassed. She extracts a pinky promise from her six-year-old to stop proposing to men on her behalf.

Ian Tomlinson isn’t looking for a wife but does need care for his daughter during spring break the week after his move to Riverbend. He hates to ask Kelly — and plant ideas in the girls’ minds — but he’s rather low on options.

How can two single parents fall in love for real with a pair of mini-matchmakers pushing from both sides — pinky promises or not?

River guide and canoe builder Reed Daniels stands by as his lifelong friends pair off. After all, he’s waited this long for the right woman… what’s a little longer? But when newcomer Carly shows up at the gang’s bonfire, he’s mesmerized. Could she be the answer to his prayers?

Water-sport enthusiast Carly Thorbergsen is starting over in Riverbend. Hired as a canoeing and hiking guide, she’s ready to focus on work and leave the personal stuff behind. That is until the competition, Reed Daniels, offers her a ride in his cedar-strip canoe. No resisting that!

But no matter how much they have in common, Carly can’t erase her past, and Reed is bound to discover the truth. When a date finds Carly and Reed running rapids on the outside of the canoe, they come face to face with the real reasons their new relationship might capsize.

Sarah Jamieson has avoided weddings since a traumatic stint as a flower girl, but reluctantly agrees to stand up for her best friend. Only why does the best man have to be one of those confident, life-of-the-party types? Even worse, why does the bride make her promise to go on one date with the guy? Easy enough to agree, because she’ll make sure he never asks.

Corbin Morrissey takes his responsibilities for Team Groom very seriously, but coaxing smiles out of the maid-of-honor is harder — and more addictive — than he expected. To his surprise, she agrees to go out. There really isn’t any way a date to the Fall Fair could go amiss. Is there?

Can Corbin convince Sarah he’s ready to settle down and make her the head of her own Team Bride, or will their past keep getting in the way?

Fired from her retail position for saying
Merry Christmas
to a customer, Tori Simmons chafes at the over-commercialization of the season and the difficulties of finding a new job. If only she’d actually said
Merry Christmas
instead of
Merry Kisses
to the tall, good-looking man buying enough toys for at least a dozen children. How embarrassing!

It was fun to fluster the pretty toy store clerk, but Heath Collins, the mall’s volunteer Santa Claus, hadn’t meant to get her fired. When his elf assistant comes down with a bad cold, Heath offers Tori a few days’ work, only to discover she believes Santa is nothing but a liar and a fraud instead of an opportunity to make a difference in children’s lives.

Can Tori and Heath embrace each other — opinions, traditions, and all — in time to share merry kisses for Christmas?

“Hi, Mommy!” Elena ran across the schoolyard, her long curls streaming behind her. “I met my twin sister today.”

Kelly Bryant knelt and braced herself for the collision. “Did you now? That’s interesting. I never knew you had a twin.”

Wham. The sturdy little girl hurtled into her arms. “But I do! Miss Jamieson said so. She said, why look at you two. You have the same birthday and the same cute noses. You must be twins.”

Time to explain how it worked… or not? Kelly hugged her daughter. “That’s great. I’d like to meet her.”

“Well, good, ’cause she’s right over there. See her, Mommy? She’s waving. And she has a daddy but no mommy. Why don’t I gots a daddy?”

“You don’t
have
a daddy.” Kelly smoothed Elena’s tangled blond hair, wild from swinging and climbing and sliding, and followed the pointing finger to see a little girl with a brown bob clinging to the hand of a tall man. The pair turned and looked at them, and the girl jumped excitedly, pointing back.

Looked like Kelly was going to be a victim of childhood matchmaking. Temporary victim. “Okay, baby girl, let’s go meet them.”

“Yay!” Elena tugged Kelly to her feet and dragged her forward a few steps before abandoning her to run into the other child’s arms. “Sophie!”

Kelly trailed along. Sure, she wanted to meet a great guy. Most single moms probably would. But the older Elena got, the more demanding she got on the subject. The girl was certain all that mattered was the daddy part. But a man who’d cherish them both? Like that was going to happen.

“I don’t gots a daddy.” Elena planted both hands on her wee hips as she tilted her head up at the tall guy.

“Elena. The word is have.” How many times had Kelly tried to break her daughter’s habit? And never more embarrassing than the present moment. “You don’t
have
a daddy.”

The man chuckled. “They say it like they see it, don’t they?”

He nodded. “I’m Ian Tomlinson. Sophie and I just moved to Riverbend. I’m the new Public Works Manager for the town.”

It got better and better. That made him the new boss she’d heard was coming. “Um, welcome. I’m one of your serfs.” And not one who would be seen trying to climb the town ladder by schmoozing her boss. Not that she was interested, anyway. He wasn’t
that
good looking. Just because he was tall with broad shoulders and brown hair that curled around his ears, brushing his collar. Just because he had an adorable grin turned on all three females in his presence. Just because he caught her staring, and the grin grew a little wider, crinkling his eyes. No, she’d never be attracted to a guy like that.

Right. She pushed out a smile. “Welcome to Riverbend. Maybe we’ll see you around. Come on, Elena, time to go home.”

Elena’s lip protruded. “But I want to play with Sophie. Can she come to our house?”

Ian angled his head to one side. “Wait a sec. What do you mean, one of my serfs?”

Kelly shrugged as she reached for Elena’s evasive hand. “I work in your department. This time of year I’m in the greenhouse growing the flowers we’ll be planting in the parks when the danger of frost is past.”

“Cool. Can’t wait to see the results. One of the things that attracted me to Riverbend was the whole doing-things-from-scratch attitude, rather than just ordering a truckload of flowers from some big grower.”

“Yes, our parks are always pretty and homegrown. Elena, time to go home.”

Two little girls clutched each other’s arms and turned pouty faces in Kelly’s direction. Since when did Elena blatantly disobey like this?

“Hey, I have an idea,” Ian broke in. “Sophie and I were heading down the street for ice cream. Maybe you two would like to come along? My treat.” He pointed to Glacial Creamery several blocks away toward the river.

Kelly took a deep breath and let it out slowly before meeting Ian’s gaze. She forced a smile. “I guess I’m outnumbered. Thank you.”

The two little girls ran ahead hand-in-hand, a Cinderella pack bouncing on one back and Elsa on the other.

Ian glanced down at the woman walking beside him. “Sorry for putting you on the spot. I didn’t mean to make it awkward.”

“And I’m sorry about Elena. I keep trying to teach her that there are things you just don’t blurt out to everyone on the street, but it’s like changing the flow of the Sandon River.” Kelly’s blond hair curled slightly against her shoulder blades. She was cute in a casual way, dressed in jeans and a purple hoodie.

Yeah. He’d moved to Riverbend to
un
complicate his life, not add to it. But he and Kelly could be friends, right? She worked in his department — which obviously bugged her — but the little girls couldn’t be more bonded if crazy glue were involved. Wasn’t it important to set aside his personal issues for Sophie’s sake? Sure it was.

“I guess she misses having a father figure,” he said carefully. “It’s tough on a kid when all her friends seem to have an intact family.”

“Elena is constantly trying to take matters into her own hands. I don’t know how many men she’s proposed to on my behalf. Many of them already married.”

He couldn’t help chuckling at the mental image that created. “Maybe we shouldn’t encourage their friendship. I’m not sure I want Sophie to learn that from Elena. Could get embarrassing.”

Was it his imagination, or was she walking more quickly… and further over on the sidewalk than she’d been?
Way to put your foot in your mouth, Tomlinson
. “Uh, that was meant to be a joke.”

The girls stopped at the tree-lined intersection ahead. “May we cross the street, Daddy?” called Sophie.

Ian stretched his stride. “No, we’ll cross together.”

A few minutes later, they all stood under the white-and-black awning, obviously intended to look like a Holstein cow. The little girls took five minutes changing their mind about which flavor they wanted. In the end, both chose bubblegum, and the server began to scoop small cones.

She peered into the case and pointed at a multi-brown swirl.

And he’d been thinking butterscotch ripple, as usual. Why not live a little? “I’ll try the same,” he told the server. “Double scoops on both.”

Two minutes later Ian steered them to a table in the sun. Mid-March was definitely too early in the season to be seeking shade. He took a lick off his cone. Hmm. Banana. Peanut butter. Chocolate fudge swirls. A bit of the butterscotch he liked. He usually preferred things separate. Distinct. In order.

He watched Kelly savor her ice cream for a moment. “I’ve been meaning to ask someone.”