Read Play Like You Mean It: Passion, Laughs, and Leadership in the World's Most Beautiful Game Online

Play Like You Mean It: Passion, Laughs, and Leadership in the World's Most Beautiful Game 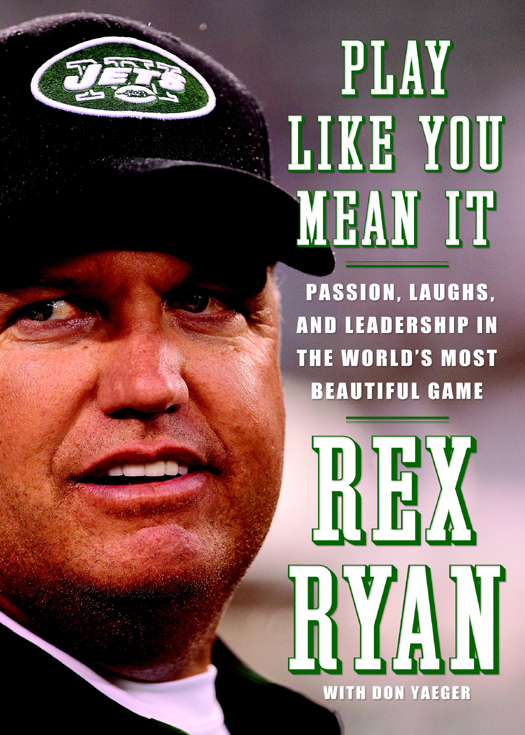 DOUBLEDAY
and the portrayal of an anchor with a dolphin are registered trademarks of Random House, Inc.

Cataloging-in-Publication Data is on file with the Library of Congress.

To my father
, Buddy, who taught me so much about football … and taught me how important it was to love the game. I am where I am today because of you.

And to all the coaches and players who I’ve been so fortunate to work with so far in my career. Your combined talents have allowed me to enjoy a career that is greater than anything I could have imagined.

To Danny Jordan
, a mentor in every sense of the word. Thank you for making me better every day.

O
n January 24, 2010, I looked up from the sidelines at Lucas Oil Stadium and watched the clock tick down to 0:00. The hard realization set in: Our 2009 season, my rookie season as head coach of the New York Jets, was over. The Indianapolis Colts had won the AFC Championship. Losing is brutal—I don’t think anyone can deny that. But some losses, well, they burn a little deeper. As 63,000 fans cheered for the Colts, and their players started putting on their championship hats and T-shirts, I jogged to the middle of the field to shake Jim Caldwell’s hand with only two things on my mind: 1) Damn … Peyton beat me again; and 2) When do I get another shot at him?

Losing in the AFC Championship was tough enough, but having Peyton Manning take a second Super Bowl ring from me just pissed me off. In 2006, when I was the defensive coordinator with the Baltimore Ravens, we got beat by the Colts in the playoffs. The whole thing just haunts me. Wait, let me rephrase that.
Peyton Manning
haunts me. In my opinion, simply winning isn’t enough. You have
to win against the best, and Peyton Manning is the best. Now, don’t get me wrong, we deserved to lose that 2009 AFC Championship Game. We were outmanned, injuries killing us all over the field during the second half. And no one knows how to abuse your weakness quite like Peyton. But to watch our season end on that note was frustrating, and the only way I knew how to deal with that frustration was to let it drive me. That’s why my first instinct was to imagine how we were going to beat Peyton the next time around … and to envision the Jets, if only in my mind, playing the Colts in the playoffs again.

My moment to mourn was short and sweet, because the second my hand left Caldwell’s, the 2010 season began and we were 0-0.

Setting the tone with my Jets in that postgame locker room speech was a huge step toward a new season. Fortunately, it took very little effort. I just went in, was true to myself, and told them exactly what I believed. I told them that the fastest way to kick ourselves in the ass was to go into 2010 with the assumption that we were going to make it to the AFC Championship Game. From that point on, every team was on a level playing field. There were no guarantees. We knew what it felt like to be right there and lose it. That would make us hungrier. We wanted to take it all. I told them to strive to get a home game in the 2010 playoffs. I said let’s play for it again, let’s win it, and let’s do it in our city, at our stadium, in front of our fans. I wanted them to wear their Jets gear and be proud. We finished in the top four in the NFL, we turned an underdog team into an AFC title contender, and we earned the respect and support of the people in New York. I mean, they lit up the Empire State Building green and white the week of the AFC Championship Game. If that didn’t make my players proud to be Jets, then they shouldn’t be on this team.

The future, I told them right there in the belly of that stadium, came with a challenge. I told the coaches and the players that I was challenging each of them, and myself, to find a way for us to get better. I didn’t know how it was going to happen, but we were going to find a way for each of us to get a little bit better. I knew as a team we
were going to have to make some roster improvements. We had to get better in the corner and better in the back end. I also knew it was crucial for us to get a closer as a pass rusher. We needed someone who could close out guys so I wouldn’t have to blitz every snap.

Coming out of that game and going into the off-season, we went right at those weaknesses to prepare for 2010. We signed Jason Taylor and Antonio Cromartie as free agents. We drafted Joe McKnight, who could help us in both the running and passing game; Kyle Wilson, who I know will be a dynamic player down the road; John Conner, who is an outstanding fullback; and Vladimir Ducasse, who is a dynamite player on the field. We also ended up getting LaDainian Tomlinson, Santonio Holmes, Nick Folk, and Trevor Pryce. We were determined to do everything we could to improve in every way possible. We even picked up Mark Brunell, an 18-year veteran quarterback, who has turned out to be a fantastic mentor to Mark Sanchez.

Unfortunately, this business is all about give-and-take. So, as excited as I was to get such amazing guys before our 2010 season, I was equally upset to have to let some go. We released Alan Faneca, Thomas Jones, and Marques Douglas, who was one of my guys from Baltimore, and traded Leon Washington to Seattle. That is, by far, the worst part of my job. These guys are truly amazing players and people. If I had it my way I would keep everyone, but that’s just not how it works in the NFL. Every decision is for the betterment of the team.

With a week or two to go before our 2010 season opener, I was feeling good. We were back in Florham Park after spending training camp at SUNY Cortland, we had officially decided on our 53-man roster, and we had settled some lingering contract negotiations. If you watched us on HBO’s
Hard Knocks
at the beginning of the season, then I’m sure you’re well aware that two of the contract negotiations I’m talking about were with our cornerback, Darrelle Revis, and our center, Nick Mangold. I’ll get into further detail about this later in the book, but for now, let me just say that compared to the Revis situation, Mangold’s contract was a
breeze. Both of these players are great guys, but the way their situations played out was far different. Our owner, Woody Johnson, and our general manager, Mike Tannenbaum, approached Nick about a lucrative seven-year extension, and he signed two weeks later, making him the highest-paid center in the league. On the day he signed, I actually held him out of practice. I mean, we’re talking about a lot of money here! The last thing he needed was to walk out there and fall in a hole with that much on the table.

Revis, on the other hand, signed a big-time four-year deal after one of the most publicized holdouts in recent NFL history. The day he came back to practice might possibly have been one of the happiest days of my life. I have never wanted something to be over more than that whole ordeal.

From the very beginning of the season, it seemed like the New York Jets were the most talked-about team in the NFL. A large part of this was due to our appearance on
Hard Knocks
. Apparently, some people think I’m entertaining. The truth is, I don’t really care what other people have to say about me, including an NFL blogger, a broadcaster, or even a former head coach. I knew
Hard Knocks
was going to generate interest. Not everyone was going to like it, and that’s fine; that’s what remote controls are for. I’d be lying if I said that I didn’t like our name constantly in the press. People were talking about us, and that’s really all that mattered. We were exactly where we wanted to be.

We put ourselves in a position where we had no other choice but to prove ourselves. I knew people looked at the Jets and me like, “Okay, Rex, we’ve been hearing about you guys all preseason. Now show us what you’ve got.” I felt challenged by all the media attention, and I LOVE a challenge.

I also don’t mind if the media’s coverage of us isn’t 100 percent positive, but I really don’t like being portrayed as something we definitely are not. We had developed what the media called an
“Animal House”
image. At first, I think we got this image because people viewed my language on
Hard Knocks
as offensive, and when they
watched the show they thought they saw a team that was all play and no work, a claim I had to defend a million times in the media.

It really escalated in September 2010 when Inez Sainz, a female reporter for Mexico’s TV Azteca, accused some of the players and coaches, myself included, of acting inappropriately toward her during a visit to one of our practices. The story hit the media on Monday, September 13, and we were exactly one week from opening the season against the Ravens in our new stadium … and this is what I’m dealing with. Now, I could go on for pages and pages about what happened, and what definitely did not happen, but at this point the whole incident has been discussed and dissected, and I don’t think anyone on either side found much to talk about.

The incident shook me up beyond belief, partially because my name was being dragged into a situation that I hadn’t even witnessed, and partially because we already had the image of being goof-offs because of
Hard Knocks
, and now we were on the verge of developing a reputation for being jerks, too. It was, honestly, killing me. It was a poor reflection of our football team, and I knew we were just the opposite of that. We always said we wanted to have some real badasses on the field and gentlemen off the field—and that’s what we had. That’s why this whole thing made me madder than hell.