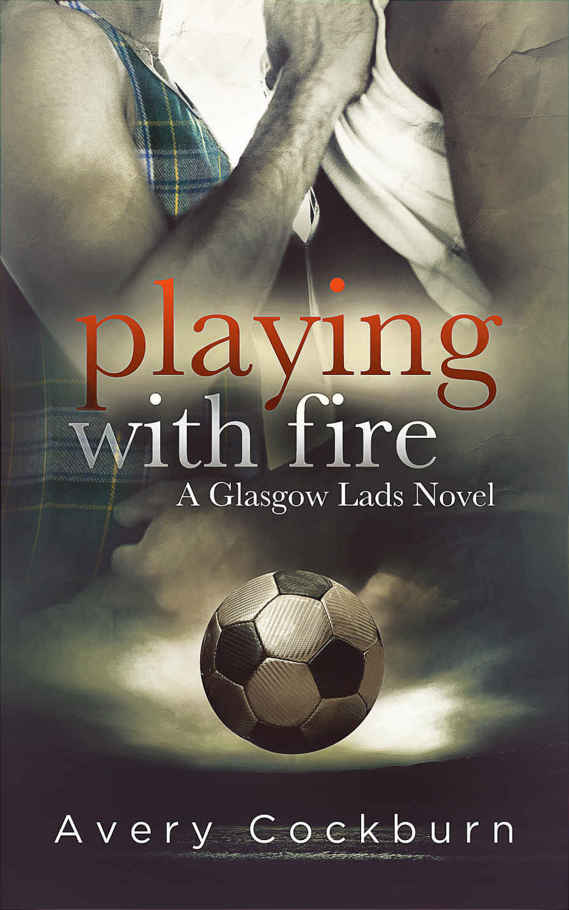 Author's Note - The End is Just the Beginning

Copyright © 2016 by Avery Cockburn. All rights reserved. This is a work of fiction. All of the characters, organizations and events portrayed in this novel are either products of the author's imagination or are used fictionally. Reproduction in whole or part of this publication without express written consent is strictly prohibited.

Want exclusive bonus material, including behind-the-scenes peeks and advance copies of twice-yearly Glasgow Lads short stories? Just sign up for my mailing list at
www.averycockburn.com/signup/
and join the fun!

Robert McKenzie has a secret. As the only straight player on an all-LGBT soccer team, he’s known to fans as “McWhatAWaste.” No one would guess Robert’s actually bisexual. At twenty-one, on the verge of a brilliant career in video games, he’s finally ready to be his true self. The only thing keeping him in the closet is…his gay best friend?

Liam Carroll has a problem. His gorgeous best mate wants to kiss him and touch him and…everything with him. But for how long? With Robert embarking on a bright future—far from their rough-and-tumble East End streets—Liam may soon be left behind. He can’t risk falling in love with a man he can’t live without. His solution? Keep things casual, see what happens.

Aye, right.
After a single camping trip, the bridge back to mere friendship has been well and truly burned. Now Robert wants more than sex, but diehard cynic Liam won’t drop the barriers around his heart. These two tough center-backs must find a way forward as lovers, or their lifelong bond—the heart of the Warriors team—will rupture for good.

To those who want to be more.

Not in
that
way, obviously. Robert McKenzie was as straight as the white lines around the penalty area they guarded with their six-foot-three, fourteen-stone bodies. Given his endless parade of long-term girlfriends, Robert was flagrantly, flauntingly, flamboyantly straight.

Liam wanted to get him into bed because he knew that alone in the dark was the only time Robert might reveal what the fuck was currently wrong with him. And though it was nighttime here on Glasgow Green, they were anything but alone, surrounded by thousands waiting for the Guy Fawkes Night fireworks to begin.

“Should’ve brought gloves.” Standing beside Liam near the center of one of the park’s paved circles, Robert clutched his coffee cup with both hands. “Wish they still did bonfires.”

“Aye, right, cos Glaswegians and open flames are such a safe combination. Here, these are still warm.” Liam handed him their communal container of chips and gravy, bought from a nearby food stall.

“Talking of flames,” Robert said as he ate, “you know what I’m dying for?”

But not tonight. Even their annual Guy Fawkes carnival-games showdown had left Robert as solemn as a monk, despite the fact Liam had let him “win” at bumper cars.

Liam pulled out his phone to check the time, wishing their friends would show up so they could move off onto the grass where it was less crowded. Like hundreds of other people (apparently), they’d agreed to meet here near the topiary statue of Clyde, the mascot of the recent Commonwealth Games. Clyde was meant to be a thistle, the national symbol of Scotland, but to Liam he looked like a demented, purple-haired clown.

His phone dinged in his hand. The screen showed a group text message to him and Robert from their goalkeeper, Heather. Heather’s day job was in TV production, so she oversaw their amateur football team’s promotional videos—one of which had gone viral last July, turning the Woodstoun Warriors into international LGBT icons.

Heather: FINALLY the finished rough cut. Sorry for the delay. Let me know what you lads think.

“Our
Newlyweds
show!” Liam tapped the link in the text. “Let’s watch it now.”

“We’ll use my phone. Screen’s bigger.” Robert pulled a set of earphones from his inside jacket pocket and plugged it into his device as the video loaded. He put one in his left ear, pushing the edge of his gray knit cap out of the way, then handed the other to Liam so they could listen together.

With a grunt, Robert moved an inch to his right so they were no longer touching.

Now
that
was odd. Robert had never cared about the space or lack thereof between their bodies, not even way back in school when the other lads had questioned his sexuality for having a gay best mate. Why was he suddenly so skittish?

The video began with a shot of Liam and Robert sitting in shadow on a small sound stage, their backs turned to each other. Standing before them was their friend John Burns, a short, brawny lad with sparkling brown eyes and sleek, dark hair. He nodded and smiled at the cheers from the studio audience.

Robert turned up the video’s volume so they could hear it over the DJ announcing that fireworks were starting in fifteen minutes.

“Welcome,” John said as the applause faded, “to our debut episode of
Back-to-Back
, a
Newlyweds
-style quiz show where, instead of competing against other couples, the couple competes against each other.” He retreated slowly as the camera pushed in. “As football fans know, offense wins matches, but defense wins championships. And the heart of every defense—the heart of every
team
—is that mystical bond between its center-backs.”

Spotlights fell upon Liam and Robert as they spun their chairs to face the camera, arms crossed over their chests, looking comically stoic.

“To protect the goal,” John said, “the center-backs’ connection must be near-telepathic.” He tapped his temple for emphasis. “They need to
guide
each other, they need to
trust
each other—but most of all, they need to
know
each other.”

Liam pressed the screen to pause the video. “Remember how tiny those seats were? I swore they’d collapse under our arses.” He poked Robert with his elbow. “Though they made us look pure huge and manly by contrast.”

“I think that was the idea.” Robert sipped his coffee, then made a face at the cup. “Ugh, I’d kill for a Starbucks just now.”

“And only prats say what prats say.” A ghost of a smile played over Robert’s lips.

Liam felt encouraged by the return of their banter. Maybe this video could melt the thin wall of ice that had formed between them.

It had been a rough couple of months for Robert, what with the failed Scottish independence referendum and the breakup with his girlfriend, Danielle—not to mention the upcoming five-year anniversary of his father’s death. Still, he seemed unusually withdrawn the last few weeks.

Robert restarted the video. John continued his intro: “Liam Carroll and Robert McKenzie grew up together in Glasgow’s boisterous and occasionally brutal East End. Friends and teammates since age six, they’ve always had each other’s backs.” John dropped a dramatic pause. “But how well do they really know each other?”

The words
McKenzie vs Carroll
fell to the bottom of the screen with a thud, followed by
Round One
and the ding of a bell.

“Ooh, nice effect.” Liam looked up from the phone to see Robert’s reaction. The tension had returned to his friend’s shoulders, and a muscle was twitching at the corner of his strong, square jaw.

On-screen, John took a seat between them as they sized each other up with friendly sneers.

“Wee fun fact for new fans?” John gestured to his right. “Robert here is the only non-LGBT member of the team. When Warriors recruited Liam two years ago, he refused to join without his best mate.”

The audience exhaled a chorus of
awww
s. Liam watched his own face turn nearly as red as his hair.

“On with the game!” John pulled out a stack of note cards. “Under strict supervision—meaning me—Liam and Robert have answered a series of personal questions submitted by our fans. I’ll now ask the questions again, and they’ll each guess the other’s answer. Correct guesses win points.” He turned to the first card. “We’ll start with favorite films. Robert, what did—”

“
Mystery Men
!” the two of them shouted together. Laughter rippled from the audience.

“That won’t count for points,” John said, “since youse had the same answer. But the follow-up question counts. Robert, what is Liam’s favorite line from this 1999 superhero comedy starring Ben Stiller?”

“‘Disco is
not
dead.’” Robert thrust his fist into the air like the villain from the film. “‘Disco is life!’”

With an electronic ding, a
1-0
graphic appeared on the screen.

“I cannae believe I missed this one,” Liam muttered, pulling his wool cap farther down to shield his ears against the rising wind.

“It’s not your fault I changed my answer over the years,” Robert replied. “At least you got the right character.”

“It wasn’t even a funny line.”

“Aye, but it was deep—‘There’s no use waiting for the cavalry. The cavalry is us.’” Robert turned up the volume again. “Now stop interrupting.”

“Going to university even though he comes from a shit area of Glasgow.” A ding sounded, and the score changed to one all. “Am I allowed to say
shit
?”

“This is YouTube. You can say anything.” John turned to Robert. “What’s Liam most proud of?”

“That’s a tough one.” Robert passed a pensive hand through his nut-brown curls. “His cure for hiccups?”

As he watched Robert and himself share a high-five, Liam wondered when his once-jovial friend would return to him. A glance to his right showed Robert rubbing what he called his “student stubble,” the unruly dark hair that crept beneath his jaw when his studies left no time for grooming.

“I’d say it’s heights.” A buzzer sounded. “You
are
afraid of heights, mate.”

“Nah, I outgrew that,” Liam said. “Now my big thing’s zemmiphobia—fear of the great mole rat.” He jutted his thumb at Robert and said to John, “His is anuptophobia—fear of being single.”

Riverbend Road by RaeAnne Thayne
Dragons Lost by Daniel Arenson
A Woman To Blame by Connell, Susan
Dying Commitment (Lucky Thirteen) by S.M. Butler
The Dark Storm by Kris Greene
Mosby's 2014 Nursing Drug Reference by Skidmore-Roth, Linda
The Circus of Dr. Lao by Charles G. Finney
Fantasmagoria by Rick Wayne
Out of the Ashes by Anne Malcom
Fosse by Wasson, Sam
Our partner