Read Powers of the Six Online

Powers of the Six 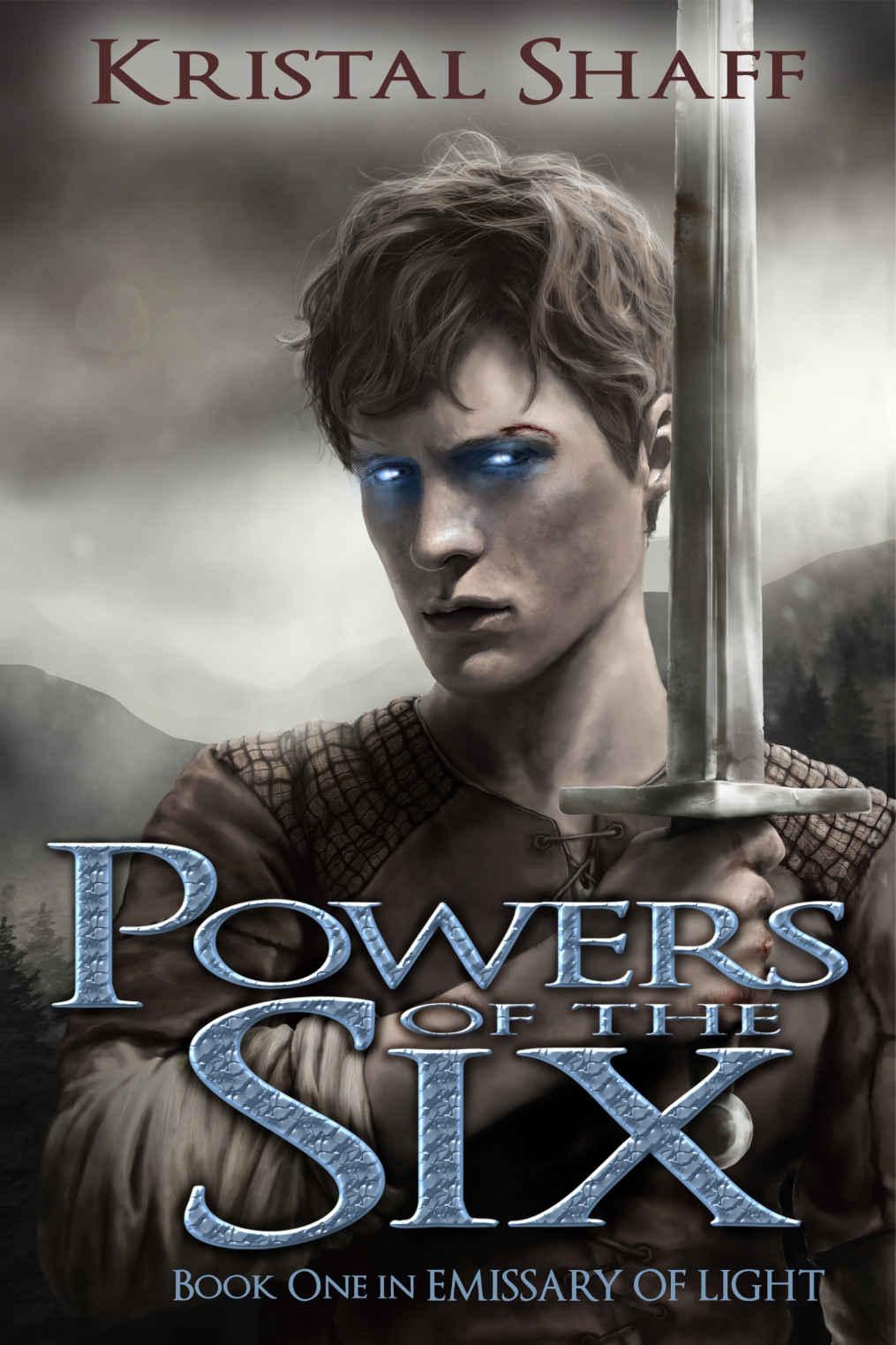 BLOOD OF THE GUARDIANS preview

This is a work of fiction. Names, places, characters and incidents are either the product of the author’s imagination or are used in a fictitious manner. Any resemblance to actual persons living or dead, actual events or locales, is purely coincidental

All rights reserved. Published in the United States of America by Kristal L. Shaff. No part of this book may be used or reproduced in any in form or by any means, electronic or mechanical, including photocopying, recording, or by any information storage and retrieval system, without written permission from Kristal L. Shaff, except in the case of brief quotations embodied in critical articles and reviews.

Visit
www.kristalshaff.com
for a free fantasy

Also, learn more about the Shay powers and keep

up to date on other books in this series,

as well as Kristal’s other works.

who never got to read this book

before he left this world,

but who encouraged me along the way

AFTER YEARS OF PRACTICE, Nolan still found lying difficult. It wasn’t easy to hide a power that came as naturally as breathing. He had to continue, even if each flawless stroke of his quill exposed him for a fraud. As impossible as it seemed, he had to keep hiding to survive.

The candlelight danced across the half-finished parchment. A pile of identical rolled scrolls lay neatly stacked near his feet. It had been a long night, one that wasn’t ending anytime soon. He covered a yawn and looked over his work.

His shoulders sagged. Crows! It wasn’t supposed to be a masterpiece.

Dipping his quill into the jar of murky ink, he forced down his Shay of Accuracy. With a flick of his wrist, Nolan dislodged exactly two drops, splattering them across the parchment—not enough to destroy it, but enough to add the imperfection it so desperately needed.

Footsteps and voices echoed outside the door. He listened, making out Duke Ragnall’s low rumble. If the duke bothered to visit this late, he’d have some “important” task he’d want Nolan to do. He stabbed his quill into the inkwell and wiped his hands on a stained rag. His long night just got longer.

He opened the door just as Ragnall poised his hand to knock. The duke’s bushy brows rose briefly, then his pompous expression slid back into place.

“Nolan,” he said. “There’s an incident that requires your service.” He glared at the grinning and puffed-up captain who stood off to his side.

“Of course, my lord.” Nolan bowed and grabbed his workbag. “What’s the situation?”

“Captain Finnis claims to have captured the Traitor of Faylinn.”

Nolan blinked. He was tired. Probably didn’t hear correctly. “Did you say the Traitor of Faylinn?”

“That I did,” Captain Finnis said. “Having a drink at Aunt Bonty’s, he was. The nerve of him, strolling into Alton like he hadn’t a care or trouble in the world.” He gave Nolan a yellow-toothed grin.

Wasn’t the captain supposed to be on patrol instead of having drinks in a pub?
From the duke’s pursed lips and scowl, Nolan guessed the duke had noticed too.

Nolan had seen pretty much everything since coming to the manor two years ago, especially in the last year when taking over the duties of Master Irvin, the previous scribe. It was absurd how much needed to be recorded: every ridiculous party, every drawn-out tournament, and even the questioning of pickpockets and idiots who’d stirred trouble because they’d had one too many. Nolan suspected Captain Finnis had downed his fair share of drink by the looks of him—red bulging eyes, stupid grin—but more so, because of the absurd claim he made. How could a drunken slob have captured such a powerful and notorious traitor?

They proceeded through the gold corridor and entered the orange-painted halls. Continuing through the blue halls, then the red, they finally reached the section of the manor where bright colors became bare stone: the prison wing. The gray, colorless walls, signifying a wordless insult to those kept behind their doors.

As they neared the West Tower, raucous laughter boomed from the hall. They turned the corner to see guards, sporting the colors of all the districts in Alton, camped in front of the entrance.

Duke Ragnall stopped. “For the love of Brim, Captain. What in the Darkness is going on here?”

“The boys wanted to have a bit of fun. Didn’t want to miss out on—”

“Unless they want to miss out on every free moment they have from now until they’re ninety, they’d best get back to their posts.”

The captain’s smile vanished. He barked orders to his men, and the hall cleared—except for two standing at attention on either side of the door. Their chests were raised. Right arms hugged iron-tipped spears as they attempted to look important.

Skirting past the guards, they climbed the staircase and spiraled by cobwebs clinging to more gray walls. At the top, the captain unlocked the large oak door and shouldered it open. The smell of old filth and mold poured through. Captain Finnis thrust his lantern into the darkness, nodded, and led them inside.

Light flickered across a man standing at the far side of the cell. He wore brown breeches and worn leather boots, and a neatly trimmed beard covered his chin. He looked common enough, apart from the bloodstained rip in the shoulder of his tunic. The man didn’t acknowledge their entrance or glance in their direction; he just stared out the small window to the streets below. Calm. Not pleading. He was different than normal men who’d been thrown into Alton’s tower.

Duke Ragnall cleared his throat. “You have been identified as Emery Cadogan, former general of the Shay Rol’dan army. What say you to this accusation?”

At first, Nolan thought the man hadn’t heard as he continued to stare into the night. Finally, he turned. Dark purple bruises ringed his eyes, and dried blood coated his split and swollen lip. In spite of his injuries, he smiled.

“So
now
I’m asked for my name?” he said. “Is it common practice in Alton to beat a man before finding out who he is?”

Captain Finnis grabbed him, squeezing his arm. “Answer the question!”

“Do you think I’d be foolish enough to show myself if I were the Traitor of Faylinn?” he answered, his teeth clenched. “I’m just a traveler, for Brim’s sake. Nothing else.” He pointed to the other side of the room, as if he were reprimanding a disobedient dog. “So if you’d please, Captain, get your filthy hands off me, and go stand over there.”

The savage expression on the captain’s face faded. He blinked. And then, oddly enough, obeyed.

Duke Ragnall gawked, his face flushing. “Captain! What in the Darkness do you think you’re doing?”

A faint purple light glimmered in the prisoner’s eyes.

Nolan stared, then shook his head. It was late. He wasn’t seeing properly.

“I’m sorry for this misunderstanding, my lord,” the prisoner said. “It’s a simple case of mistaken identity. I’m common enough. Could easily pass for someone else.” He forced a laugh. “Though being mistaken for a traitor isn’t something I’d like to repeat.”

A glazed expression passed over the duke’s face. “Yes, my good man. I’m sure it’s all a mistake.”

My good man
? Blood drained from Nolan’s face. He inched toward the door; but as he slipped a hand around the opening, an overwhelming contentment washed over him.

As if moving through fog, Nolan turned to the prisoner. Nolan should be frightened, shouldn’t he? No. Of course not. The man wasn’t the traitor. Captain Finnis was, after all, an idiot.

Nolan met the prisoner’s light-filled gaze. Violet illuminated the man’s head, casting a glow in the dim confines of the cell. How could he help him? They would need to sneak past the guards. Slowly, truth pushed through the haze. These thoughts weren’t his own. They were
his.