Promises to a Stallion (Kimani Romance) 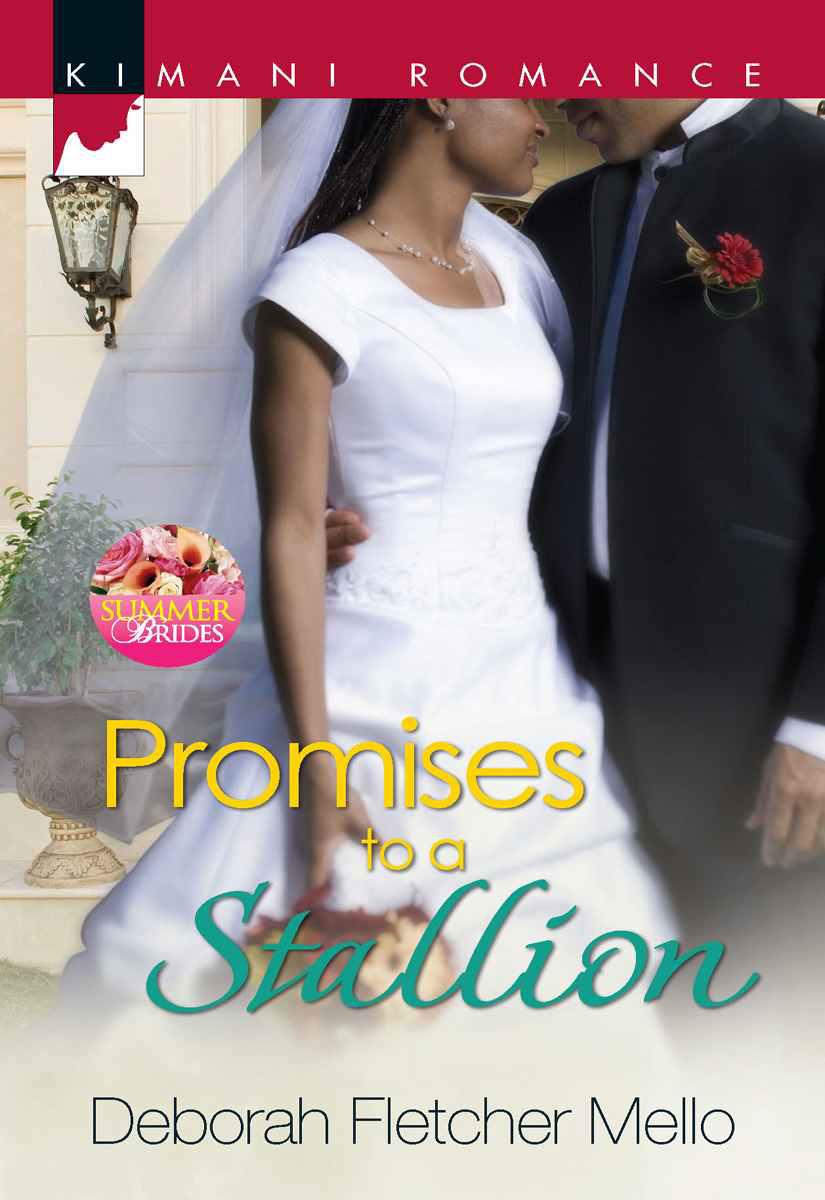 The shower enclosure was small. Much smaller than the shower they’d shared at the Stallion family home.

Stepping into the flow of heated water Travis pressed his hands to Tierra’s shoulders, moving his body close to hers. His fingers skated down the length of her arms, tickling her flesh.

Tierra closed her eyes as she moved against him, pressing her back up against his chest. A shiver raced from the pit of her stomach and into her limbs. She felt a delightful throb between her legs.

Tilting her face to his, Tierra kissed him. Their lips touched first, then their tongues, meeting like old friends. Their passion rose in intensity, his tongue eagerly searching her mouth, reaching as far as it could. Tierra moaned as Travis danced in her mouth then gently sucked on her lips. He couldn’t remember ever having tasted anything so sweet.

Tierra opened her eyes wide, staring deep into his. In that moment she couldn’t imagine wanting to be anywhere more than where she was right now. More important, she knew she didn’t have to.

“I want you,” Tierra murmured before kissing his mouth again.

In the Light of Love

To Love a Stallion

Lost in a Stallion’s Arms

Promises to a Stallion

Forever and a Day

The Right Side of Love

Take Me to Heart

has been writing since she was thirteen and can’t imagine doing anything else. Her first romance novel,
Take Me to Heart,
earned her a 2004 Romance Slam Jam nomination for Best New Author. In 2005 she received Slam Jam’s Book of the Year and Favorite Heroine nominations for her novel
The Right Side of Love,
and in 2009 she won a
RT Book Reviews
Reviewers’ Choice Award for her ninth novel,
Tame a Wild Stallion.

For Deborah, writing is akin to breathing, and she firmly believes that if she could not write she would cease to exist. Weaving a story that leaves her audience feeling full and complete, as if they’ve just enjoyed an incredible meal, is the ultimate thrill for her. Born and raised in Connecticut, Deborah now maintains base camp in North Carolina but considers home to be wherever the moment finds her.

To the late Mrs. Hattie Joanne Woody, who demanded excellence, nurtured greatness, instilled compassion, and inspired a generation of dreamers to reach beyond the stars.

Your love thrives in your son’s heart and I am grateful for it.

I absolutely loved writing Travis and Tierra’s story. Inspired by a real-life love story, I couldn’t help but imagine the possibilities of a couple meeting, falling in love and making the decision to marry in less than thirty days.

Thank you for taking this amazing journey with me. Your words of encouragement and support continue to keep me writing and motivate me to write well.

Until the next time, take care and God bless.

E
very head in the room turned to stare at the beautiful young woman who had just released an unnerving scream at the top of her lungs. Startled expressions turned into curious stares, and a few amused smiles, that swept from corner to corner as the other patrons of Ridgeland Diner noted her infectious smile. Something had obviously made the woman extremely happy.

Seated at a cushioned booth, Tierra Braddy was jumping excitedly in her seat. Clearly embarrassed, the man seated beside her looked around sheepishly. He was hardly impressed, but his twenty-eight-year-old baby sister was fully taken by the good news she had heard.

“Girlfriend, you are the best,” Tierra exclaimed into her BlackBerry. Her deep brown gaze met the dark eyes that resembled her own. She was grinning widely, but her brother’s full lips were turned into a deep frown. She poked her tongue out at him as she continued her cell phone conversation. “Thank you. Thank you so much,” she said just before disconnecting the call she’d been so eagerly engaged in.

“Let me guess,” Tingin Braddy said, leaning back against his seat, his arms folding over his broad chest. “You were able to pull off a dozen gold-winged doves for this wedding of the century?”

Tierra’s eyes widened in delight. “Better. We are confirmed for the chapel at Briscoe Ranch. Isn’t that great?” she exclaimed, her whole body quivering with excitement. “You remember Eden Waller, don’t you? She married Doug Waller’s brother Jack.”

“I remember Doug. I don’t think I ever met Jack or his wife.”

Tierra shrugged. “Well, Eden and her sister are the event planners at Briscoe Ranch, and they weren’t sure the renovations would be completed in time for us to use it. But she said they are officially finished and mine will be the first wedding in the building since 1949! How great is that!”

“Grand,” Tingin responded, no hint of enthusiasm in his voice. “But let me ask you something very important,” he said, leaning forward in his seat and resting his elbows atop the table. He leaned his chin against the back of his cupped hands and met her curious stare evenly. “Are you sure about this, Tea? Because it’s not too late to change your mind.”

“I can’t believe you would ask me something like that!” The young woman’s voice was laced with attitude. “I have been planning my dream wedding since I was ten years old. That’s how sure I am.”

“I get the dream wedding part, kiddo. We were all just hoping you’d find a dream groom to go with those nuptials.”

“Don’t start, Tingin,” Tierra said, the hint of a reprimand on her tongue. “Don’t spoil this for me. You know how I feel about Damien.”

“That’s not the problem, either. It’s how Damien feels about you that has me concerned.”

The smile on Tierra’s face had folded down into an annoyed frown. “Big brother, be in a relationship that lasts longer than a minute and then you can have a conversation with me about somebody loving somebody.” Her negative attitude had magnified substantially.

Tingin held up his hands as if in defeat. “My apologies. Don’t get your spine all bent out of shape. I wouldn’t be a good big brother if I didn’t ask, Tierra.”

“You always have to try and spoil things, Tingin. Ever since we were little kids. You get some perverse thrill out of trying to burst my bubbles, don’t you?”

The man laughed heartily. “You have me all figured out. I’ve been plotting since the day you were born to bring you down,” he said sarcastically.

Tierra punched her brother in the arm, the gesture just hard enough to get his full and undivided attention. “Well, stop. It’s not working.”

“It was supposed to. Now,” Tierra said, changing the subject as she gestured toward their waitress for the bill. “I need to go confirm my flower order. Do you want to come with me?”

Tingin dropped his paper napkin to the table and shook his head. “I think I’ll pass, but give me a call when you go for the menu tasting!”

Tierra was still annoyed with her brother as she headed in the direction of McKinney Avenue and the Timeless Fiori floral shop. Her appointment with Hilary, the head designer, had been a last-minute scheduling, and Tierra didn’t like that she was feeling out of sorts when the moment should have been one of her happiest. She heaved a deep sigh.
Why aren’t I happy?
she wondered.

Tierra had always been certain that she would one day be Mrs. Damien Porter. She’d been convinced ever since she’d laid eyes on the boy the day she and her brother had moved into their grandmother’s north Dallas home, just two doors down from where Damien lived. The two had both been twelve years old. The term
rocky
didn’t begin to define their relationship. For as long as Tierra could remember, she’d been enamored with Damien, and more times than she cared to count, Damien had been enamored with someone else. All through school Damien had been attentive and caring, but his attention could too easily be diverted elsewhere. Their high school cheerleading team had given Tierra a real run for her money, but despite his many trysts, their friendship had always drawn Damien back to her side.

College had proven to be the turning point in their youthful infatuation. Her senior year at Texas Southern University and her interest in the TSU Tigers’ star quarterback had pricked Damien’s jealous streak, and that quarterback’s interest in Tierra had finally motivated him to make a commitment to her. He had professed his adoration for her, and the two had been virtually inseparable from that moment on.

His proposal had come five years ago, just after Damien had enlisted in the military. But the engagement had been an extended one since Damien hadn’t felt it necessary for them to jump right into anything. Then with his recent deployment to Afghanistan they’d been hesitant to officially set a date. But now he was expected back for a little rest and relaxation, and the two intended to tie the knot while he was home on extended leave. Meanwhile, Tierra had been left with the mechanics of putting together a wedding all by her lonesome.

Now with the plans for her dream wedding coming together, albeit slowly, her brother had to spoil the fun by reminding her once again that no one—not him, their grandmother or her few friends—were actually happy about her marrying Damien. Every one of them believed the man couldn’t be trusted to honor her love by being forever faithful. But Tierra trusted that once they were husband and wife the two of them would prove everybody wrong. She heaved another deep sigh. She still couldn’t shake the melancholy that had gotten a hold of her.

She forced herself to smile. Damien would be home in less than thirty-six hours, and then the last pieces of her life plan would all fall into place. Determined to kick her excitement into gear, she accelerated the vehicle, exceeding the posted speed limit. If nothing else, Tierra couldn’t wait to get to her future. She was a young woman who couldn’t wait to be a wife.