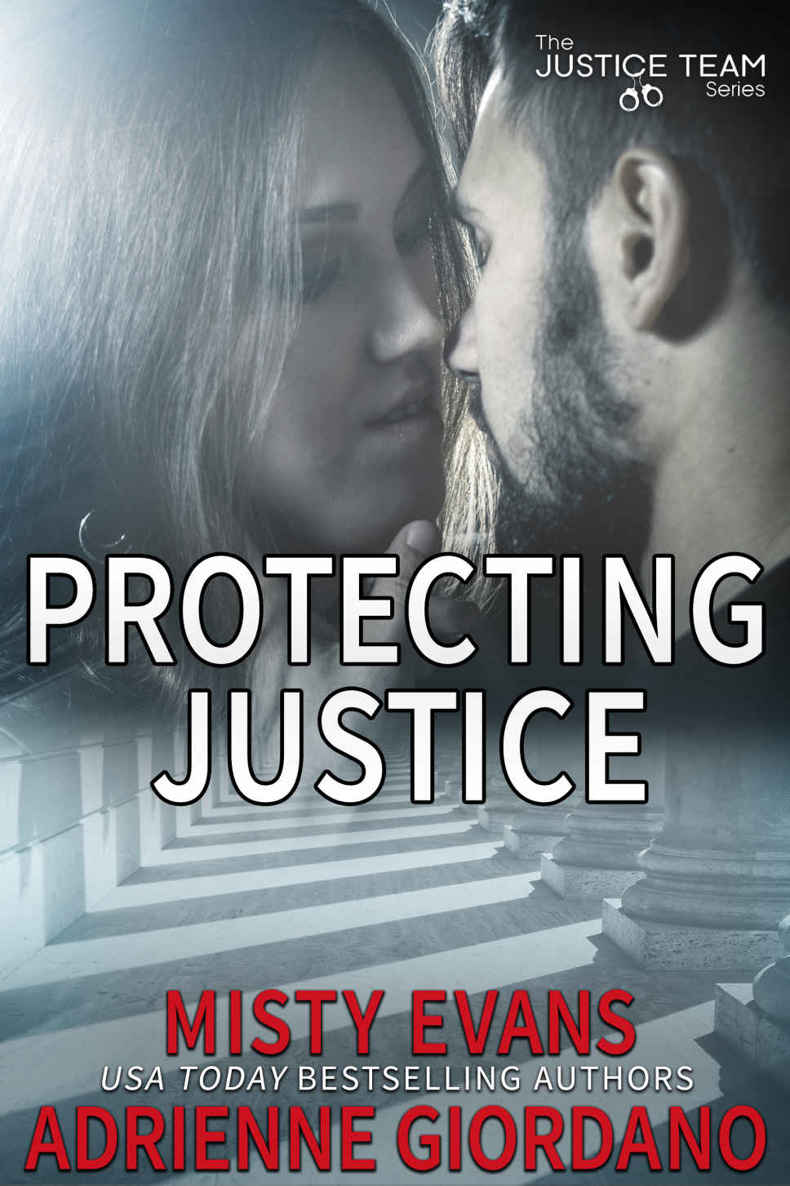 Other Books in the

More from Adrienne and Misty

To all those who keep us safe and protected.

The place smelled like Heather. Scents of lilac and vanilla. A cheap, but fragrant perfume her sister had loved since high school.

The doorbell rang for the twelfth time mixing with the drone of voices. People, food, a constant barrage of visitors. That’s what happened when someone—particularly a United States senator—died. Friends and family gathered.

From her spot at the front window, Fallyn let her father have his moment greeting the newcomers in the foyer. All the while, out on the tiny front lawn, the press fought over a few feet of grass and badgered guests as they approached the front door.

Two hours earlier, Fallyn’s plane had landed in DC and she’d gone into fixer mode, giving the press a statement, making sure her father had his meds, dealing with calls from the coroner and finding creative ways to fit the shitstorm of visitors into her sister’s 900-squarefoot brownstone.

Jordan Lomax squeezed between Senator Morgan’s staffer and a woman Fallyn didn’t know. The young woman’s Latino features were devoid of makeup, her hair in its normal braid. As Heather’s trusted assistant and family friend, Jordan had been the one to find Heather’s body. She’d also been the one to organize the casseroles and other food streaming through the door all morning.

“Fallyn,” Jordan said, “there’s someone who’d like to pay their respects to you personally.”

All she wanted was for everyone to leave. To give her a moment to catch her breath and process.

The look on Jordan’s face, though, told her it was someone important. Of course it was. Everyone in Washington had known Heather. “I’ll be right there.”

She took a moment to glance out the window. Damned press. After greeting whoever was looking for her, she’d have to deal with them. Call the cops or figure out some other way to clear them from the lawn. A lot of people in this town owed her favors. She needed to cash in and get rid of the vultures.

Staying close to the wall, she angled around an armchair and spotted a man in a black suit with an earpiece—Secret Service—waiting at the bottom of the steps.

He must have come in the back way.

Taking a steadying breath, Fallyn entered the foyer. President Abraham Nicols was shaking her father’s hand, Eric Pasche beaming as the packed house of visitors hovered close, listening in on the president’s words.

“She’ll be sorely missed,” Nicols said to her father. Secret Service formed a circle around them, keeping the visitors at a respectful distance. “Her legacy won’t be forgotten.”

He’d been one of Heather’s biggest fans.

Behind the president stood Ryan, the president’s grown son, staring at her over his father’s shoulder. His gaze connected with hers and froze for an instant.

She’d been getting looks like that since she’d been here—people struck by her identical appearance to her twin.

Ryan stood tall, broad shoulders filling out his Air Force dress uniform. The medals adorning his chest created an array of colors indicating they had a real-life hero in their presence.

He skirted his father and held out a hand. “You must be Fallyn.”

She accepted his handshake and mustered a smile. He didn’t know her, but she knew him. His father had asked for a favor concerning him not long ago. “And you’re Ryan.”

“Home for a few days leave and wanted to pay my respects.” His sad smile seemed sincere. “My father thought a lot of your sister. I did too. She was a big supporter of the armed forces and everyone knew it. We’re so sorry.”

A lump formed in Fallyn’s throat, as if she’d swallowed a peach pit, rough, and painful. “Thank you.”

A pitiful, useless comment, but what else could he say?

The president moved over to them and reached out to embrace her. She flinched, then realized her faux pas. Abraham Nicols didn’t go around offering hugs to just anyone and she’d have to suck it up or risk an embarrassing situation.

Reluctantly, she went into his embrace and gritted her teeth. She hated being touched, and she didn’t have
that
kind of relationship with the president. If they’d been out in front of the reporters, she would have known it was nothing but a political move on his part. Knowing him, it still was.

But hugs were part of the process too. Everyone wanted to hug her right now.

“My condolences, Fallyn,” Nicols said close to her ear. “Heather was special.”

Fallen pushed aside the emotions his words stirred. The guilt. “Yes, she was.”

If I’d only come to see her like I promised a hundred times. If I’d only picked up the phone.

The ‘if onlys’ were pointless, but their hovering presence, like the visitors hanging on every word by President Nicols, was a familiar weight. Fallyn had a lot of ‘if onlys’ in her past, especially where her identical twin was involved.

She tried to pull back, but Nicols wasn’t done. “I’ll be at the funeral. Send my office the details.”

Jordan saved her, stepping up and offering the president and Ryan a drink. Always the hostess.

The two men begged off, and a moment later, hurried out the front door in a hail of goodbyes, the Secret Service clearing the way through the reporters.

That’s what I need. A couple of big, burly guys to clear that lawn.

The media weren’t going to be chased off, though. Just like the swamp of people inside Heather’s house.

For a moment, Fallyn fought the urge to yell and tell them all to get out. Her heart hurt and her head was pounding. A part of her had been ripped away and she needed a moment—or maybe a billion moments—to figure out where she went from here.

It was her motto when Pasche & Associates’ clients went spinning out of control. When you ran an elite consulting firm specializing in crisis management and media relations, every client—from the Bible-thumping politician coming out of the closet to the junkie actor returning to rehab—could make or break you. One wrong move and you could do irreparable damage to their careers, their lives, their families.

Jordan touched her back. “Can I get you something? A soda? Some green tea?”

From the time she was a kid and their mother had left them, Fallyn had been driven to fix other people’s problems. She was good at it, too, the best. Her firm’s multi-million dollar net income the past two years and its list of high profile clientele proved that.

Like her sister, power sped through her veins like a steam engine. Fallyn had even taken care of a few private messes the president had gotten caught in, making them disappear.

Talk about being in good with the most powerful man in the world. The paycheck had been sweet, but the fact the prez owed her a favor was even sweeter.

Yes, she was the best fixer in the country. Maybe even the world.

If only I could bring Heather back.
“No, thanks, Jordan. I need to make some calls. I’m going upstairs.”

Her father’s voice cut through the room. “You’re working at a time like this?”

Heather had been his golden child after their mother, Christina, had left him. With Heather gone—Fallyn still couldn’t stomach the word
dead
—he’d taken to his bed and dumped all the funeral arrangements and other responsibilities on her. Carl and Jordan had managed to get him up and moving and over to Heather’s place by the time Fallyn had arrived, but she hoped she wouldn’t have to get him out of bed when the time came to bury his daughter.

“I need to make arrangements with the funeral home, the florist, and the caterer,” Fallyn said, giving her father the stink eye. “You’re welcome to help.”

Dad turned up his nose, brushed past her on his way to the kitchen.

The front door opened—a guest leaving—and Fallyn heard a commotion on the lawn. She strode to the door and peeked out.

A fight had broken out between two of the cameramen. They traded insults along with fists, falling in a heap on the ground. Fallyn lost sight of them as the crowd closed in, ringside seats.

Oh my God. This is frickin’ ridiculous.

Claire DeWitt and the Bohemian Highway by Sara Gran
Compromised by Emmy Curtis
Accustomed to the Dark by Walter Satterthwait
Black Queen by Michael Morpurgo
Silver and Gold by Devon Rhodes
The Wall by Carpenter, Amanda
Occasional Prose by Mary McCarthy
As Simple as Snow by Gregory Galloway
Creeps by Darren Hynes
How to Light Her Fire! by Madame X
Our partner