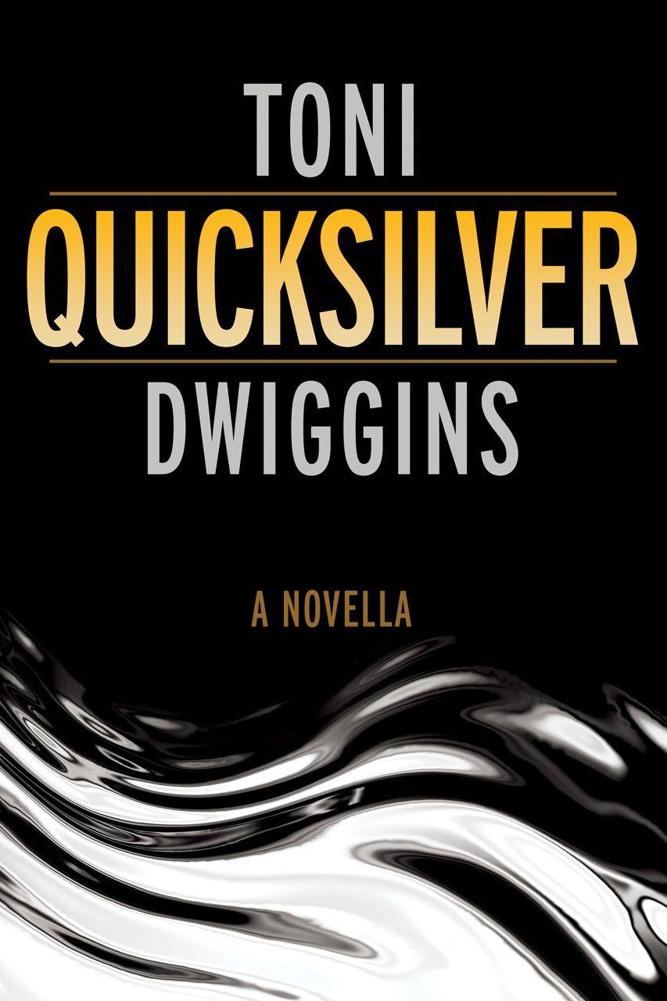 No part of this publication may be reproduced, stored in a retrieval system, or transmitted in any form or by any means—electronic, mechanical, photocopy, recording, or any other, except for brief quotations in printed reviews—without prior permission of the publisher.

All characters and events portrayed in this work are fictitious.

If there are factual or technical errors in Quicksilver, they are mine alone.

M
APS: located at the end of the book

It’s luring me on as of old;

Yet it isn’t the gold that I’m wanting

So much as just finding the gold.

T
he man who had hired us took the lead.

His name was Robert Shelburne and he was as sure of this path as he was of himself.

Nevertheless—if anyone was asking—I sure could not recommend this way up the mountain. There was no trailhead. There was no
trail
—the path did not exist on the map I carried. It was a rogue route, blazed long ago, surviving today as little more than a hint. It shot straight up the slope and was so thickly haired with trees and brush that we were nearly hiking blind.

I heard my partner Walter Shaws, a couple dozen feet below on the path, muttering words he would not normally speak aloud. Walter and I have certainly hiked plenty of unofficial trails and exploited the terrain where no trails run at all, in rougher country than this—we’re geologists who read earth evidence from crimes and crises, which often takes us deep into the field. Still, we weren’t in the habit of bushwhacking up a mountain without good reason.

Robert Shelburne had given a reason for taking this route.

Good or not was yet to be seen.

As we climbed, a breeze kicked up and brought an odd vegetative odor, which I could not identify. Clearly it didn’t come from the rangy manzanita or deer brush that infested the path. It came from deeper into these oak-and-pine wooded slopes, or perhaps up higher.

Up ahead, Shelburne disappeared into the timber as if he’d been consumed.

For a moment I was disconcerted. What if he took a turn that we, in turn, missed? What if the path branched left and we went right? Bad form for two geologists to lose the client in the field. I shouted, “
Slow down
.”

From the woods above came the reply, “I’ve stopped.”

Lost his way? I picked up my pace and called to Walter to pick up his and a half-minute later I crashed through the brush and found Robert Shelburne kneeling on the path.

I couldn’t see around him. I said, “Find something of interest?”

He got to his feet and brushed dirt off the knees of his stylish hiking pants and adjusted the hip belt of his backpack and then, almost in afterthought, he stood aside to reveal the ground where he’d knelt. On the trail was a bandana, moon-silver and dirt-smeared. If this had been a proper trail I would have assumed that a random hiker had wiped grime from his face and gotten careless stashing the bandana in his backpack.

The chance of that, here and now, was not worth discussing.

Walter drew up, winded, and crowded in beside Shelburne. Walter in his battered gear and weathered face looked like he’d been out in the field for weeks. Shelburne in his upscale gear and cultivated tan looked ready for a photo shoot for Outside Magazine. As for me, I was comfortable in aged boots and worn backpack, female and unweathered enough to take notice of Shelburne’s stylish look, acutely aware of the messages we sent with the gear we chose.

Walter was now studying the bandana in the dirt. “That’s his?”

“I’d bet the farm on it,” Shelburne said.

“Meaning what?” I asked. “He flagged the trail?”

“So do you read anything into that?”

“Beyond the color identifying it as his bandana?”

“I could read things into the color silver until the cows come home.”

“I was thinking in particular about his state of mind.”

“The state of his mind,” Shelburne said, “is chaotic.”

Walter cleared his throat. “And yet functional enough. Else we wouldn’t be here tracking him.”

We fell silent, gazing down at the bandana. There was no way to tell if it had been dropped a day ago, an hour ago, minutes ago. The ground was thin-soiled, thick with fallen pine needles. No footprints to be examined, identified.

Walter said, “Are you going to leave it there?”

“Okay then,” I said, “message being we’re on the right track. No need to bet the farm.”

Shelburne smiled but there was caution in his eyes.

“Well.” Walter plucked up the bandana and stowed it in his pack. “At the least, good wilderness manners.”

We continued our ascent, stringing out along the narrow path, Shelburne picking up his impatient pace, Walter soon lagging, me claiming the middle, keeping track of my companions. I tracked Walter by the sound of his heavy breathing. For the briefest moment the thought floated
he’s getting slower in the field
. And then the thought went away. I tracked Shelburne by the red of his backpack, which stood out from the green of the brush. I wondered if he was brooding on the color silver.

That odd smell came again—something loamy and rotting, it seemed, beneath the trees beyond the brush.

I thought, not for the first time today, this is not my turf.

Ten minutes later the trail jacked hard left and then like a gift the trail and I escaped the besieging woods.

We’d achieved the upper slope and it was paved by a field of bedrock. Rubbed raw by ancient fingers of ice, this field was not going to give us an easy traverse. The rock was too steep for us to take a high line, and I saw no ducked trail marking, no little pyramid of stones to point the way.

But Shelburne quickly found his traverse, charging ahead.

Bare-bone bedrock would normally lift my heart, but not here, not now, not pinned to the rock face with a thirty-pound pack on my back and that bandana on my mind.

I looked back and saw Walter, just beginning the traverse. Slower in the field, yes, but sure-footed. Not young, but surely not old.

I returned my focus to the path ahead and judged the bedrock—by its silky golden sheen and crinkly foliation—to be phyllite, a rock one metamorphic step beyond slate, not the rock we were hunting but perhaps a close neighbor.

Ahead, Shelburne had reached a hackly break in the bedrock where a ladder of switchbacks ascended the wall.

Shadows moved across the rock. I looked up. I didn’t much like the bruised cumulo-nimbus claiming the sky. The weather report had not forecasted a storm but in the Sierra Nevada mountains bad weather was not out of the question, especially in September’s dying days.

By the time I reached the switchbacks, the breeze had begun to bite.

Two switchbacks up, as I was mulling over the idea of digging a poncho out of my backpack to have at the ready should the skies open up, there came a clattering sound like rain—no, like hail hitting a sidewalk—and Shelburne up above shouted “
look out”
and I flinched. Rock fragments fell, shotgunning the bedrock trail. A slaty sharp-edged piece impaled itself in the tongue of my right boot. It was nearly the size of my fist. It stung my foot. I was glad it missed my head.

Walter, still below on the traverse, called, “Cassie, what happened?”

But it wasn’t. Shelburne in his haste was courting recklessness. I hollered up to him, “Be more careful.”

I tipped my head way back. Several switchbacks above Shelburne there was a ledge, slightly overhanging the trail. You don’t get talus unless it’s been wasted out of a rock face and that meant this bedrock sheet we were climbing continued above the ledge. The ledge was a false ridge, with a debris field hanging on its lip, just waiting to be dislodged.

No sound from the ledge above.

Down on the bedrock trail, the three of us waited.

My foot throbbed. I bent to extract the rock fragment. It had torn the leather skin of my boot tongue and bruised the top of my foot.

Conceivably, nobody was up on the ledge flinging rocks at us. There was the obvious alternative. A scampering ground squirrel could have done it, although those were a good number of big rock frags for one small squirrel. Could have been a bear. I once encountered a shifty California black bear patrolling a ridge, waiting for hikers to arrive and shuck their packs and open the trail mix. I didn’t mind a bear. I knew bears. I’d ditched the trail mix in deference to the bear and we each pursued our own paths.

“
Come on
,” Robert Shelburne yelled down at us.

Hell if it was a squirrel or a bear.

Odds said that it was the man who’d left the bandana to flag the trail. And now he’d found himself a vantage point to watch for us. And I dearly hoped he’d dislodged the talus by accident.

If not...what the hell, Henry Shelburne?

T
he Shelburne case had begun on the other side of the mountains.

California’s Sierra Nevada range showed two faces—the severe steepled eastern side and the gentler lusher western side. Our home base was the mountain town of Mammoth Lakes, on the eastern side.

Day before yesterday, Robert Shelburne showed up at our door.

Normally, our business didn’t come from droppers-by. Most of our work came from law-enforcement referrals and defense-attorney requests. Still, we had a Sierra Geoforensics sign over the door and a working website, and someone looking for world-class forensic geologists could find us easily enough.

It was mid-morning when Shelburne came into the lab, giving it the once-over, tossing us a smile and an inquiry. “Might I steal fifteen minutes of your time?”

Walter rose from his workbench. “That depends on what you intend to do with them. Mister...?”

“I am,” Walter said. He gestured at me. “Cassie Oldfield’s partner.”

“Ah, partners, even better.” Robert Shelburne stuck out his hand and crossed the room to me.

I rose from my workbench and accepted the handshake. I knew what he was seeing. Junior partner, clearly. Given that this man had come looking for Walter, I expected him to assess my age and status and possibly gender and pass quickly on to Walter. He didn’t. He held my hand a moment longer than pleasantries required. Firm handshake. Direct eye contact. No flirtation; direct and professional.

That should have impressed me. It nearly did.

It certainly gave me the time to assess him.

He had the air, and look, of a man who took charge. He had a strong face with a bladed nose and black brows that cambered like bird wings. His green eyes were narrow, his face all angles. He looked to be in his mid thirties. His black hair was diked with a single silver ray, slicked back and feathered at the neck. He wore a multi-pocketed khaki jacket over black hiking pants. Power grooming, mountain style. He carried a stylish and very large leather satchel.

The Storm Witch by Violette Malan
From the Chrysalis by Karen E. Black
A Spy Among the Girls by Phyllis Reynolds Naylor
Hunt the Heavens: Book Two of the Shadow Warrior Trilogy by Chris Bunch
And Four To Go by Stout, Rex
The Witch of Agnesi by Robert Spiller
The Exorcist by William Peter Blatty
Tidal Wave: How Women Changed America at Century's End by Sara M. Evans
The Headmaster's Confession by Laurel Bennett
Ballistic by K.S. Adkins
Our partner