A knot wraps tight in my stomach. “So
that's
why you needed the money?”

She looks trapped. “I didn't think you'd want to help if you knew...” She shrugs.

It's time to tell her what I know. “And that's why you stole the tails?”

The way her chin snaps up and her eyes fly open I know I'm right.

I half expect a blast of furious words or more tears, or something worse, but she just slumps back and closes her eyes. “Oh, Travis. What am I going to do?”

I shake my head. What a mess.

As we sit there in silence, I have the same helpless feeling I get when a horse goes down and you know there's not much you can do to save it. But this time it's a person who's down. Not only that, I have the awful feeling that this relationship is going to be tough to save. What surprises me most is the sting of tears now that I know the truth. I blink and gently pull my hand back.

At first I think she's not going to answer. She stares down at the table, the muscles in her jaw working.

The time it takes for her to answer is long enough for me to pull my thoughts together. Sassy has been lying to me from the beginning. A bubble of anger pushes up through the layers of hurt and disbelief. Sassy tried to turn me against my friends.

When she finally starts to mumble an explanation, I'm
so mad I can barely force myself to sit still and listen. I make myself stay and hear her out. I want all the details so I can tell Jasper.

“It wasn't hard,” Sassy says so quietly I need to lean forward to hear. “Mom doesn't care if I'm out late. Like she could stop me. I went to the track early enough that people were still around, as if I had to go to work. Then I'd hide out until late and wait until everyone had gone. There are lots of places to hide.”

She flicks a quick look in my direction. I think of the space between the hay bales where we shared chocolate and kisses. Was that one of her hiding places?

Her gaze drops back to the table. “Rainy nights are best,” she continues. “Nobody hangs around, and whoever is on the gate stays inside the hut. Getting the tail is quick, once I'm in the stall.”

“How do you see what you're doing?” I can't imagine she'd turn on the overhead lights.

“I have a headlamp. I only turn it on for the few minutes when I'm in the stallâ working. When I'm done, I stick the tail in my backpack.”

She looks up at me again. “I'm sorry. I would have told youâ¦I wanted to tell you.”

I don't bother saying anything. We both know that's just another lie.

“What are you going to do?” she asks.

It's my turn to shrug. I have no idea.

She nods and her eyes fill with tears. This time, though, I feel no desire to put my arm around her. “Come on,” I say. “Let's get going.”

When I drop Sassy off, I get her to run in and get the box of tails. She doesn't argue. It's like all the fight has gone out of her.

I leave her standing on the top step out-side her door and head for the track alone. In the parking lot, I throw an old towel over the tails and stuff the box under my arm.

When I get to our barn I say, “Don't say anything until you hear this.” I march past Ryan and Jasper, who follow me into the tack room.

“You're not supposed to beâ,” Ryan starts to say.

I pull the towel away. Ryan and Jasper look at the tails and then at me.

“Where did these come from?” Jasper asks.

I nod. For a long moment, nobody says anything. Jasper is the first to break the silence.

“I guess that explains a few things.”

“Yeahâlike why Sassy was trying to put the blame on you,” Ryan says.

Jasper nods slowly. Any thought that I'm going to get off easy disappears when he speaks again.

“We all know that Sassy is a little messed up. What I don't get is why you went along with it. How you could believe the things she said about meâbeing a thieving Indian and all that?”

“How do you know what she said?”

Jasper looks at me like I'm stupid not to know. “Let's just say that girl has a big mouth. You don't think you're the only one she's been talking to, do you?”

I let that sink in for a moment. “Okayâshe might have said some stuff. That doesn't mean I believed it.”

“Keeping your mouth shut is nearly as bad as saying ignorant stuff yourself.”

To my surprise, Ryan starts to defend me. “Travis has beenâ¦distracted,” he offers. “He hasn't shown the best judgment.”

I can't argue with that.

“And there was some evidenceâlike the tail hairs and razor blades he found in your bag.”

“You went through my stuff!”

“Your bag fell over and stuff fell out. Stuff like tail hairs and razor blades,” I say, trying to explain.

“I told you already. I collect stray hairs for my grandma. There's no way I'd chop off whole tails. And the razor blades go with this.”

He reaches up and grabs the bottle of coconut oil from the shelf above the card table. “One word,” he says. “Chestnuts.”

“We're almost out,” he adds, holding the nearly empty bottle and looking at me meaningfully.

“And I'm sorry.” The words are out there, but like my dad says, apologizing only goes halfway to fixing things. The other half is the tough part, doing something to make things right.

Jasper almost looks like he's going to protest, but I put up my hand. “She did something stupid when she stole the tailsâ but I kind of understand why.”

I explain about Sassy's parents and how desperate she is to raise the money to move out.

Ryan and Jasper nod and ask a couple of questions but mostly they listen.

“Stealing isn't the worst thing though,” I say, looking straight at Jasper. “She should never have lied and tried to get me to blame you. And I should have walked away the first time she said anything aboutâ”

I look down at the hole in my boot, shame bringing a flush to my face. How could I have been such a moron?

“If it makes you feel any better, she also managed to get me to clean out my bank account.” I tell them about the bet on Mashed Potato.

“Jeez, manâshe really had you wrapped around her little finger,” Ryan says.

“I guess we should tell the guys in the office,” Jasper says.

“She shouldn't really be working around the track,” Ryan says. “Who knows what she'll try next.”

I nod glumly. Even after everything that's happened I know a small part of me will miss Sassy.

“Don't look so miserable,” Ryan says, whacking my shoulder. “We could use the reward money.”

Jasper laughs. “That's for sure.”

I nod, but I don't want any of the reward money for myselfânot for turning Sassy in.

“Hey! I heard there's a cute girl who just started working for Kitty. We could get you two introduced,” Ryan says with a wink.

“Don't give him any ideas,” Jasper fires back. “The man has no self-control.”

Just like that, we start joking around again. Ryan pulls the tack room door open, and we spill out into the barn aisle, ready to get back to work. I don't know what will happen to Sassy. She'll be banned from the track for sure, but I hope she doesn't get arrested. What I do know is that I'm not the right person to help her. At least, not right now.

On Saturday, the three of us scream our lungs out as we watch Dusty Rose fly over the finish line, a full length ahead of the horse in second place. Jasper and I exchange high fives and Ryan actually hugs me. We scoot over to the winner's circle, and the owners of Three Musketeers Racing Stable line up to get our photo taken with Dusty. The photographer raises her camera, and Jasper shouts, “All for one and one for all!”

The flash goes off, catching us all laughing. When we get our copy of the photograph, I'll have it framed and hang it right beside Jasper's dream catcher. I can't think of a better way to celebrate the win. 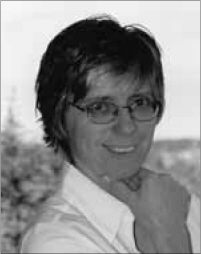 Nikki Tate is the popular author of many books for children, including
Jo's Triumph
and
Jo's Journey
. Nikki (and her collection of goats, ponies, dogs, cats, and assorted feathered friends) makes her home on Vancouver Island. Her first book in the Orca Sports series was
Venom
.

Her Only Hero by Marta Perry
Five Minutes in Heaven by Lisa Alther
Someone Perfect for Mr. Moore by Whittaker, Lucy J.
The Durango Affair by Brenda Jackson
Checkmate by Malorie Blackman
Little Girl Blue by Randy L. Schmidt
Hunted (The Iron Druid Chronicles, Book Six) by Hearne, Kevin
I Have a Bad Feeling About This by Jeff Strand
The Agrista (Between the Lines Book 1) by Shannon Lamb
Live-In Position by Tice, V.S.
Our partner