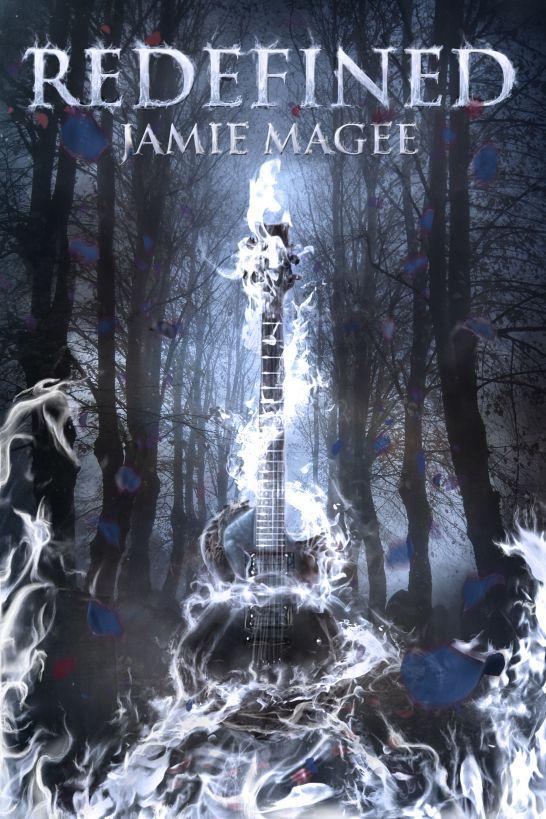 This is a work of fiction. All of the characters and events portrayed in this book are fictional, and any resemblance to any real people or event is purely coincidental.

All rights reserved, including the right to reproduce this book or portions thereof in any form. No part of this book may be reproduced in any form or by any means without the express consent of the publisher and author, except where permitted by law.

Other Books by Jamie Magee

Where To Find Jamie Online:

“We must be willing to let go of the life we planned so as to have the life that is waiting for us.” Joseph Campbell

It’s not supposed to feel like this. I mean, all your life you struggle for independence, to be able to make your own decisions, to break free from the restrictions and guidelines of your parents - and the moment you get just that, you don’t want it. You want to hear your mom tell you what step to take next. You want to look into her eyes and see approval, direction. You want to feel that protection.

What I feel now is the last thing I dreamed I would feel each time Draven and I’d plotted our escape as we grew up side by side. I wanted my parents. I wanted to know that they were safe. That whatever I’d gotten myself into could be undone. That somewhere in the midst of a past I can’t remember and a future I could not comprehend, I would find myself.

Draven and I’d been alone in his guest room for almost half an hour now. We hadn’t said much. He had continued to sway me side to side, humming slightly. Every once in a while I would feel his body tense and glance up at him to see his jaw locked and his eyes closed tightly. For no reason, out of nowhere he squeezed his arms around me so tight that I couldn’t breathe.

“Are you okay?” I asked as I gasped under the pressure.

Instantly, he let his arms fall loose as he moved to the bed and sat down, burying his face in his hands.

I saw him dare to smile as his hands fell. “I can’t hide anything from you,” he murmured.

“Right, so tell me what’s going on inside your head,” I whispered as I gently wrapped my arm around him.

He moved his head slowly from side to side. “I just keep seeing me pull that light from you…I keep seeing what you went through in The Realm with Aden.”

My stomach sank instantly as I felt the guilt for a memory that had remained dormant in my mind, the time that Aden and I’d innocently fallen asleep side-by-side years ago. The fight that Draven and Aden had because of it. That realm, all the lingering insinuations that this family had given about Aden and me knowing each other before this life, seemed to add salt to the wounds that I’d forgotten were open.

“Listen to me,” I said as I turned his face so he would look at me. “We’re here now. Landen and Willow got you through that. I know they will get you through whatever hunger happens to surface again…” My thoughts cascaded over the memory of them giving him all of that glowing energy. “For all you know, that craving is forever gone now.”

“I know,” he whispered as he stole a gentle kiss from my lips. “I just see what happened before, how I lost control, how once I lost it I couldn't get it back. I was a prisoner in this body, watching it destroy the one thing that gives me reason to fight this curse… ” His angry eyes poured over me. “It was too much - the fear in your eyes, fear of me.”

My eyes glassed over as I felt the emotions of that last fight, how I pushed him, how dangerous that was.

“It was my fault. Madison told me not to let you turn anger into passion, to make you mad and teach you that you could be mad and still have control…I don’t think she was wrong. I just think I pushed too hard in a place and time that I shouldn’t have.”

He looked away from me. “If you hadn’t pushed me there, I never would have believed that it would’ve been possible.” He hung his head as his long fingers massaged his eyes. “I still don’t think it’s possible to do on my own…if it weren’t for Landen and Willow, the energy they pushed into me, we wouldn’t be sitting here.”

“And if it weren’t for us, they wouldn’t be. Everything we do comes right back to us. Karma is the law in every dimension. We can debate this for hours, but by you helping them, you helped yourself; therefore, you did find a way to stop, to stare the biggest fear you had in the eye and find a win.”

His eyes rose to meet mine as he smiled weakly. “You’re too good, Charlie. I just told you that your parents are missing, and in the middle of that you are still worried about me, about us.”

“Because us is me. We are one in the same. I know together we’ll figure this out.”

“And I know...that if something happens to me, Aden will protect you,” he said in a placid tone laced with jealousy as he looked away from me.

As a familiar disdain filled his eyes, he grumbled, “Stop what?”

“That memory is mine again - that fight, what the three of us went through a few years ago. I hear and feel every mean word we said to each other. I’m not going to let you take something that we have gotten over, something that only happened because I was jet-lagged from my flight, and hide behind it, assume that it doesn’t matter what happens to you, that your brother will be there to pick up the pieces.”

“I’d rather him pick them up than Silas,” he said as he leaned back on his arms and prepared to watch me unravel in my anger.

“Nobody is picking up anything because you are not going anywhere. Do you hear me?!” I said louder than I needed to as I pushed him back before pinning his arms above his head. “I don’t care what wall is knocked down in Aden’s head, I don’t care if someone takes my memory. This is now. This is forever. Stop pushing me away. I don’t deserve it!”

His eyes were hungry - not for a light, but for a promise that I was his, that no matter what we went through, my heart - which was thundering in my chest - belonged to him. As if he could hear it racing, he placed his hand there.

“It’s yours,” I whispered. “Always has been.” My voice trailed off for no reason.

I felt light-headed, on the verge of fainting. As a cold sweat washed over me, I leaned back and slowly crawled off him. As I stood, I swayed. It felt like I was being washed away...vanishing.

“Charlie?” Draven said as he sat up.

My mind started to fire random images at me. I glanced to the window, to the fields of flowers I could see framed there. My vision flashed like a camera. Everything turned white every other instant, and that fading feeling kept washing over me.

Voices, sounds from a past I knew and a past I didn’t know echoed around me. I raised my hands to my ears, trying to stop it. I squinted my eyes closed, thinking I could stop the flashing visions, but that just made them clearer.

I saw a place like Chara but it was clearly not that land. The air was regal, yet simple. All of nature was vibrant and seemed to pulse with the vibration of the universe.

There was a home, a beautiful, eccentric home that rested near several more. It was mine, but it couldn’t be; it just couldn’t be. I saw my parents there. My mother was not some uptight businesswoman, but an advocate like my father.

I saw an entire life with them in that place, one that held more time than my youth would have supplied. My mind was at war. I kept trying to push myself back to the life that was real, to the childhood I did have.

I focused on the apartment in New York, but I found it furnished far differently than my mother had ever had it decorated. I focused on her office, but there was another man behind her desk. The bookshelf with all my photos and her trinkets now held images of someone else’s family.

Frantically, my mind rushed to my home in Salem. It was there, but it was far more secluded than I had left it. A large brick wall was around the property. Each room had white sheets covering the furniture.

I could hear Draven saying my name, his hand rushing over my skin as my knees buckled. Slowly, we fell beside the bed.

“Tell me you’re real,” I breathed, terrified that his memory would vanish next, that the life I had with him would wash away in this psychotic break I was having.

“Look at me!” he demanded as if he had said it a thousand times before.

I focused on the emerald green-laced-with-black eyes that had always been my strength. I heard his voice whisper eternal promises to me and I grasped each word as if it were a lifeline.

My mind jerked me backward, forcing my eyes closed once again as I heard my mother’s voice whisper to me across a distant wind. I saw a different side of her, someone that would come into my room hours after I’d fallen asleep and caress my hair, my back, as I dreamed. When I spoke random words in my sleep, she would smile and tears would glass over her eyes.

“You are precious, my little one. Your blood is regal, and you will prevail,” she would whisper to me.

I started to breathe rapidly in and out. “Tell me you’re real,” I said to Draven, trying to ensure that my lifeline to reality was still there.

I felt him squeeze my arms, my wrists, and my waist. When his hands reached for my thighs, my soul seized, anchored by the vibrant touch of his passionate embrace.

For no reason, he hissed and tensed. My eyes flew open. A cold sweat was across his brow. One glance to my skin told me that I was glowing, that the glow was reaching for him, that a part of him, his essence - which was dimmer, ashy - was reaching for that light. At some points on our skin, the essence of each of us was winding together.

Uncollected Stories 2003 by Stephen King
The Garden of Magic by Sarah Painter
Perry, Owen - Faded Coat of Blue by Unknown
Death In Captivity by Michael Gilbert
The New Girl by Tracie Puckett
The Temporal Knights by Richard D. Parker
The Cowboy and His Baby by Sherryl Woods
Garnethill by Denise Mina by Garnethill
Fibles by M. R. Everette
Alive in the Killing Fields by Nawuth Keat
Our partner