Read Redemption in Love (Hearts on the Line) Online

Redemption in Love (Hearts on the Line) 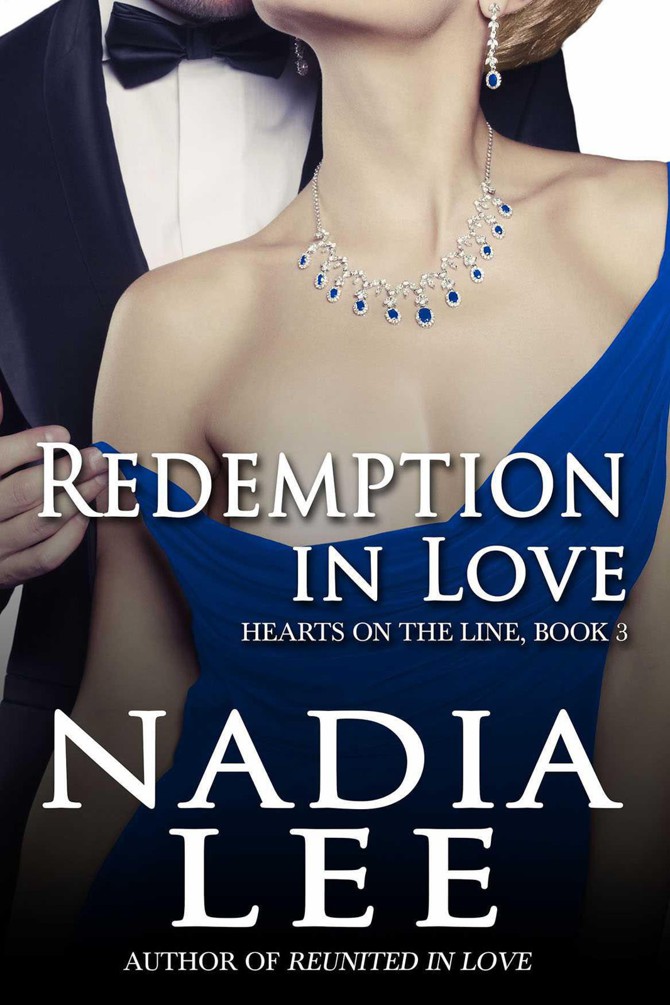 It’s love or nothing…

All Amandine Monroe ever wanted was to fit in with her glamorous and wealthy in-laws and live happily ever after with her irresistible husband Gavin Lloyd. Three years after the wedding, she’s still nowhere near fitting in with her in-laws, and Gavin has given her everything—except his heart.

When she finds out she’s pregnant, she decides she can’t raise her child in a home devoid of love. If she can’t have Gavin’s heart, only a divorce will do.

Gavin won’t let the only woman he truly cares for walk away without a fight. He demands full custody of their child or a chance for them to reconcile.

Saving their marriage will require more than expensive gifts and a second honeymoon. If Amandine and Gavin can’t overcome their pride and private fears, they’ll have to let go of each other forever…

Hearts on the Line, Book 3

This book is a work of fiction. The names, characters, places, and incidents are products of the writer’s imagination or have been used fictitiously and are not to be construed as real. Any resemblance to persons, living or dead, actual events, locales or organizations is entirely coincidental.

All rights reserved. No part of this book may be reproduced, scanned, or distributed in any manner whatsoever without the prior written permission from the author except in the case of brief quotation embodied in critical articles and reviews.

Redemption in Love
was a particularly challenging book, and it couldn’t have been written without the help of so many people around me.

I’d like to thank the following awesome people and groups:

My husband for making me laugh at inappropriate times.

My two-year-old son for doing his best to steal my laptop and “help” mommy write.

Magic & Mayhem Writers—Amanda Bonilla, Amanda Carlson, Shawntelle Madison and Sandy Williams—for listening and being there for me.

The amazing Grace and wonderful bloggers and reviewers who championed the Hearts on the Line series.

Last but not the least, my amazing fans whose support has been invaluable.

AMANDINE MONROE LLOYD SAT with her legs pressed together and ankles crossed in Dr. Silverman’s office. The good doctor had a prosperous practice in Los Angeles, catering to the significant others of the rich and famous. The waiting room was decorated in soothing sage and creamy yellow, just like the office. Instead of posters warning women about the dangers of various illnesses, the clinic walls had tasteful prints of modern art, the kind that people in Amandine’s husband’s social circle would easily drop a few million dollars to own. If they had been the originals, of course.

Until her marriage, she’d never been able to afford a gynecologist who had a private practice, much less one as high-class as Dr. Silverman’s. She squirmed in her seat. Her pink chiffon Oscar de la Renta dress and matching Manolo Blahnik stilettos cost more than what most people made in a month and should have been enough to make her feel like she belonged in the office. But they were something her personal shopper—one her husband had hired—had bought to ensure she looked the part of Mrs. Gavin Lloyd. She would never have spent that much on something she’d end up wearing only once or twice, but her shopper bought something new every other day. Maybe the woman was trying to compensate for the fact that Amandine didn’t want her clothes custom-tailored in Europe like Gavin.

She studied the little pots of aloe on the window sill, counting their spiky leaves. What could be taking Dr. Silverman so long?

A few minutes later, the doctor walked in and took her seat at the desk. In her early forties, Dr. Silverman was model-thin and short—shorter than Amandine’s five-five—with a friendly face and warm green eyes. She wore a white doctor’s lab coat over a peach tunic and a skirt as brown as her hair. Her shoes were sensible pumps, unlike Amandine’s impractical stilettos.

“Congratulations again.” She handed Amandine a discreet ivory envelope made of expensive paper. There was nothing on the outside except the clinic’s logo. “Here’s the sonogram so you can share it with your husband. I’m sure he’ll be thrilled.”

“Thank you.” Amandine put it in her purse, her hands less than steady. She and Gavin had never discussed having children. But it’d been three years since they’d gotten married, so wasn’t it about time they thought about the next generation?

Okay, so their third anniversary was tomorrow. Almost three years.

“By the way…” Amandine began.

“Does it matter that we used birth control all this time?”

“Is the baby” —Amandine put a hand on her belly— “going to have a problem because of that?”

“Not at all. Don’t worry. No birth control works one hundred percent of the time. But that doesn’t mean that pregnancies occurring during usage aren’t viable, or that your baby will run a higher risk for any particular condition.”

“The most important thing for you right now is to relax, eat healthy and do some light exercise three to four times a week,” the doctor said, ticking off the points on her fingers. “The receptionist will give you a booklet with everything you need to know. It has two copies of
Nutrition
, one for you and one for your staff. I’m sure your cook can come up with something acceptable based on my recommendations. If you need more information or have any other concerns or questions, feel free to contact me at any time.”

“Thanks.” The reassurance made her feel a little better. Gavin paid a hefty fee every year to ensure that Amandine could remain a patient at the private concierge service clinic, and unlike some physicians, Dr. Silverman really was available at all times via phone, email or text.

“I want to do another exam in two weeks. Please see the receptionist to schedule your next visit.”

Amandine walked out of the office and into the waiting area. Her best friend and personal assistant Brooke de Lorenzo rose from the comfortable white leather couch. She had on an eye-popping outfit, as usual; this one consisted of a sleeveless magenta top, a teal mini-skirt and a golden loop belt. The top was slightly loose, but the skirt was tight enough to show off her butt, the “spoils of the gym” as she called it. Big gold hoops dangled from her ears, her short sassy bob framing a pretty face. Her black platform boots moved silently over the carpeted floor as she approached, two bags hanging from one of her shoulders.

“Everything good?” she asked, her eyes level with Amandine’s. The two of them were the same height, and today so was their footwear.

“Great. When do you want your next appointment?” She pulled out a tablet.

She conferred with the receptionist and nodded. “Okay. Ten o’clock.”

The receptionist tried to hand Brooke a card with the time written on it, but she waved it away. “Got it.” She flashed the fancy tablet and put it in one of the bags.

Brooke and Amandine walked into the elevator together. “I should call Gavin.” Amandine wanted to tell Brooke the news, but of course her husband should be first.

“Okay.” Brooke waited until they reached the lobby, then dialed his number and handed the phone to Amandine.

“You know you don’t have to do phone duty, right?” Amandine said, pressing the stylish gadget to her ear and walking toward her car.

“I keep you plenty busy with more important things. Like organizing yet another charity function.” Amandine hated fundraisers, but it was something she realized she needed to do as Gavin’s wife. She wasn’t an art teacher anymore.

Gavin picked up on the fifth ring. “Hey, sweetie,” he said.

“I’m in the middle of something. Is it urgent or can I call you back?” he asked, speaking fast.

Did her pregnancy qualify as “urgent?” It might be better to wait until he had some time to digest the news. “Later is fine. Call me.”

She handed the phone back to Brooke with a sigh. “He’s busy.”

“He’s always busy. You should’ve told him you want to talk now.” Brooke peered at Amandine. “If you’re calling him, it must be important.”

“It’s okay.” She should’ve known better than to call during the workday.

Brooke took the driver’s seat of the pearly Mercedes coupe Gavin had bought for Amandine on her last birthday and put on a pair of oversized sunglasses. They were shaped like butterfly wings. “I’ll drive. You just relax.”

“Thanks,” Amandine said, shoving some more conservative shades onto her own face. Brooke was one of the best drivers she knew. That was the only reason she’d been able to convince Gavin not to hire a chauffeur.

“So what is it? Not cancer or anything, right?”

Amandine choked, then started coughing. “Of course not. Why would you even think—?”

“Don’t give me that. You looked totally shell-shocked coming out of the doctor’s office.” Brooke’s short but artfully manicured green fingernails tapped the steering wheel. “And you hardly ever call Gavin at work.”

“Wow! Seriously? Congratulations! I didn’t know you guys were planning to start a family.”

“He wasn’t.” She’d been wanting a family, a couple of children at least to fill their huge mansion, but somehow it had never come up. “I mean, we weren’t.”

Amandine looked at the semi-congested road ahead and sighed. “I’m just a little worried is all. Gavin’s never said he wanted kids.”

“You should think about what you want, too. That’s what being a couple means, right?” Brooke made a deft turn onto a smaller street with fewer motorists and accelerated. “Anyway, it’ll probably work out.”

“How? Gavin hardly ever has time to spend with me anymore. How will he make time for a child?”

“He’ll figure it out. Children have a way of changing your priorities.” Brooke paused. “You know Sandy and Eugene?”

“Sure. They had a girl last year.” Amandine had sent a large basket of baby goods, with the help of her shopper, Josephine, who’d gone wild in various boutiques, selecting all sorts of cute little things. The woman knew quality, and Amandine had wanted the best for Brooke’s older sister’s first-born.

“Okay, you can’t tell anybody, but…they were thinking about separating.”

Shock shot through Amandine. “Are you serious? They seem so in love.”

“Sandy’s not the type to air her dirty laundry in public, but believe me, they were having problems. Fighting about all sorts of stupid stuff all the time…they’d just about decided it wasn’t worth it, even though a divorce would’ve killed the parents.”

“It must’ve been pretty serious for Sandy to risk disappointing your father.”

Brooke glanced heavenward. “Oh my god, you have
no
idea.”

Brooke and Sandy’s father had raised his two daughters alone after his wife’s death, working himself to the bone to provide for them. Amandine had spent some time with him when all of them were younger. Though he was one of the nicest people she knew, in some ways he was also one of the most conservative. He wanted his family to be together and happy, and for his elder daughter to divorce would have been a huge blow. Amandine had a feeling that Eugene’s parents were similar.

Love Sex & Other Games (Part 1) by Cheryl McIntyre
Sunshine by Wenner, Natalie
Ruby Ink (Clairmont Series Novel Book 1) by L.J. Wilson
Angel in My Arms by Colleen Faulkner
Never Any End to Paris by Enrique Vila-Matas
Wildfire by Sarah Micklem
Out of The Box Awakening by Theriot, Jennifer
Matt & Zoe by Charles Sheehan-Miles
Where Would I Be Without You by Hawk, CJ
Love and Fear by Reed Farrel Coleman
Our partner