Reflections On A Middle-Aged Fat Woman 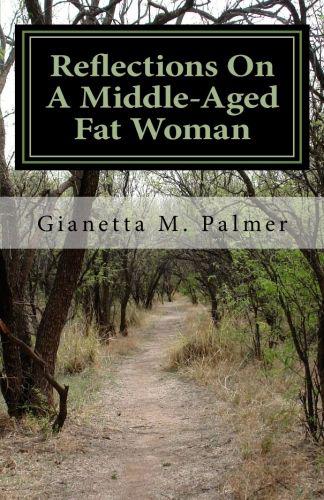 Reflections On A
Middle-Aged
Fat Woman

Amazon Kindle Edition License Notes:
This ebook is licensed for your personal enjoyment only. This ebook may not be re-sold or given away to other people. If you would like to share this book with another person, please purchase an additional copy for each recipient. If you’re reading this book and did not purchase it, or it was not purchased for your use only, then please return to Amazon.com and purchase your own copy. Thank you for respecting the hard work of this author.

The right of Gianetta M. Palmer to be identified as author of this Work has been asserted by her in accordance with sections 77 and 78 of the Copyright, Designs and Patents Act 1988.

The following selections are a compilation of the author’s favorite posts from her popular humor website. You can check out more of her stories at
www.middleagedfatwoman.com
.

During a recent overnight business trip, I was excited to stay in a really fancy hotel that offered room service. It was so late by the time I finished up my tasks for the day that I didn't really want to venture out anywhere so I ordered room service.

The book in my room that told the specifics about the hotel and listed the room service menu seemed to be missing a page or two. Somewhere I read that they offered breakfast as an option but couldn't find any breakfast items listed.

I called the front desk and was transferred to a nice lady that worked in the restaurant. The following is our conversation:

Me: “I'm not sure. Is this room service or have I called the Varsity?”

Lady: ”Oh, you must live around here, don'tcha? I like to say that to the traveling folks. Makes 'em think they is at the Varsity. Since you is from around here, I'll rephrase my question and ask what would you like to have for dinner?”

Me: “I'm not sure. My hotel book only lists options for lunch and late-night dining. It does list a Filet Mignon for $52, but I don't think I'll order that. You got any seafood plates?”

I called the front desk in the morning and mentioned that my hotel book was missing a few pages, so when I got back into the room that night I hoped to see what other options might be available. They hadn't provided me with the missing menu so I had to call again without knowing what I wanted.

Lady: “Lordy! Is this the same lady from last night?”

Lady: “I told them room cleaners to put you a new book in there, but I guess they didn't. It figures. Well, what'll ya have then, what'll ya in the mood for?”

Me: “You got any fried chicken?”

Lady: “Fried chicken? Honey, this ain't the Big Chicken, but we do have a three-piece platter with smashed taters and a vegetable.”

Me: “Sounds goods. What's the vegetable?”

Lady: “Why, collard greens, of course. That's the only thing that goes good with chicken.”

Me: “Hmm, I don't really like collard greens, you got anything else?”

Lady: “Harrumph! Whatcha' mean, you don't like collard greens? Are ya crazy or somethin'? I thought you said you was from around here?”

Me: “I live up in the mountains, but I'm originally from Ohio.”

Lady: “Oh, I see. You from north of the sweet tea line, (that's my favorite line to describe someone from the north) ain't ya? Well, we ain't got any other vegetables, so I'll send you a double order of taters, okay?”

It worked for me since mashed potatoes are my favorite food. The next day during our lunch break we were standing in line at the small cafeteria in the building where our training was taking place. Listed on the daily lunch special were fried chicken, mashed potatoes and a vegetable for only $5.99. "What's the vegetable?" I asked.

You know I already knew the answer to that before the lady answered in a familiar voice. "What'll ya have, what'll ya have? It's my first day on the job here and the vegetable of the day is collard greens. Could you believe someone ordered the fried chicken at the hotel last night and said they didn't like collard greens?"

Since Thanksgiving was so late this year my family and many others, I'm sure, have been playing catch up for the past several weeks. The following is actual dialogue between my family members on various subjects:

MA Fat Woman: "You got your tree yet?”

MA Fat Woman: "It's December 21, how much later are you going to wait?"

Mom: "It's been raining. I can't very well get a tree in the rain, can I? Besides, I called a guy and he said he would deliver it to me.”

Mom: "Listen here young lady! Don't you get smart with me?”

Sister: "What did you get Mom for Christmas?"

MAFW: "Nothing yet. She already has everything she could possibly want or need. What did you get her?"

Brother: "What does Mom want for Christmas?"

Sister: "I don't know. MAFW was supposed to do some hinting around and find out.”

Bad Monkey by Carl Hiaasen
Fruit of the Poisoned Tree by Lavene, Joyce and Jim
The House on Seventh Street by Karen Vorbeck Williams
Rodent by Lisa J. Lawrence
Cara Darling by Destiny Blaine
Street Safe by W. Lynn Chantale
Nothing More than Murder by Jim Thompson
Catseye by Andre Norton
All of me by S Michaels
Fade In by Mabie, M.
Our partner