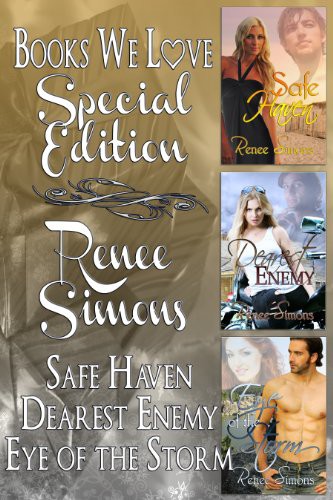 The man with the weird yellow eyes stared down at her but she tried not to be afraid. She sent her mind to this other place she'd found and she went, too, leaving her body behind, so whatever he did wasn't happening to her, just this empty...thing...lying on the cot.

After a while, someone knocked on the door and called out something she didn't understand because she was so far away. The metal frame of the cot squeaked. The eyes moved away and so did the smell of after-shave that reminded her of wet leaves when you turn them over to get at the bottom of the pile.

She must have shivered because he grabbed the hem of her plaid jumper and flipped it down so it covered her legs. She hated her school uniform, but now the long pleated skirt kept her warm and that was okay. He passed his hand down her chest as if smoothing the prissy white blouse. She felt like throwing up but swallowing hard helped push the feeling down. The stillness returned and she was okay again.

A gust of wind swept into the shed as he opened the door and went outside. The wooden bar slipped into place with a thump. It was safe to come back now - not all the way or worse feelings than the nausea would start up again - but a little ways.

When the sound of his shoes crunching on the gravel grew faint, she went to the window. He was walking toward some men standing in the yard. One of them looked like her uncle, but she knew that couldn't be. He would never have let anything bad happen to her.

The dirty window kept her from seeing clearly, but when the group drifted apart, she knew the man towering above the others crowding around him was her father. She used a corner of her skirt to make a clean spot, then tried to signal, banging as hard as she could with her fist. The sound didn't seem to carry very far and the glass wouldn't break.

Her uncle pointed to the shed. Her father turned toward her. She screamed his name, over and over, till her throat grew raw, even though she felt he couldn't hear her. Suddenly he grabbed one of the men around the neck and took something away from him. Even through the grime, she saw it glitter in the sunlight and somehow knew it was a gun. He'd come for her now. He’d put his arms around her and tell her everything would be okay. Her heart pounded because she'd be out of here and home where people cared about her.

But he didn't come. The circle of men closed around him again. After a little while and a lot of pushing and shoving a dull thud echoed in the silence. She watched for a long time. Finally, she closed her eyes and sank to the floor, hugging her knees to her chest and leaning back against the rough wood wall.

Why didn't he come?  Didn’t he know he was her only hope? Did he know what had happened to her? Was he ashamed? She choked back a sob. Was he hurt? Was he...no, she wouldn't think about that. More questions tumbled forward. She didn't try to stop them. Thinking was okay as long as feeling didn't start, and it mustn't, not until she knew what more would happen to her. Finally, a man came and let her out. He tried to steer her to one of the cars but she shook him off and headed for her father.

He didn't move. His eyes were open, looking sad and empty, maybe even a little surprised. Not warm and smiling as she remembered. In a movie once, someone closed the eyes of a dead person. She couldn't bring herself to do that, so she just touched his cheek. His skin was still warm. It seemed like maybe he wasn't really dead. Then she saw the blood puddling on the grass beneath his head and a trickle forming beside his mouth and knew he had to be. His arm lay beside his head. It was bent at a weird angle and the fingers were wrapped around a gun.

Above her, figures in dark suits formed a wall. Some of these men had been to her parents' house for summer barbecues and dinner parties. No one reached out to help. Their faces were expressionless, except for her uncle, who looked like he'd swallowed something rotten. She expected him to talk to her. He just turned his back.

The man with the yellow eyes didn't turn away. He watched her without blinking, without any expression on his narrow face. She stared back, the way you did when you were facing a wild animal and trying not to be afraid. She'd learned to do that in the shed, when she knew he wanted her to be scared. Just like before, neither of them looked away, until her uncle said something to him and he went inside the farmhouse. She looked down at her father one last time, then let herself be taken home.

"Step back from the edge, Miss."

A voice behind Jordan VanDien spoke softly, but with some urgency. At the warning that seemed more like a gentle caress, she turned and watched a tall man with sandy hair approach.

He prodded the soggy ground between them with a long metal rod. "I told you to move away from the edge."

"We have a problem with erosion after heavy rain."

On the beach below, a turbulent surf pounded the shore, legacy of the storm that had swept across
Cape Cod
Bay
during the night.

"Looks solid to me."

He reached out and stabbed at the ground behind and a little to her left. The pole sank into the earth, breaking off a piece and tumbling it over the edge of the bluff.

"Bloody galah," he muttered, and continued to test the ground, though with less disastrous results.

He turned to her. "Back home in
Australia
, we have a bird called a gah-lah, g-a-l-a-h. It's got pretty feathers, and very little common sense."

Dolt, she thought. He seemed to be waiting for a retort. During the pause she examined fading bruises and cuts marring an otherwise pleasant face. An angry line like the track of a knife ran the length of his right cheek and disappeared into a red-gold beard, lending a piratical air that made him appear dangerous and disturbing. She could handle dangerous. Disturbing was another matter entirely, one she wanted no part of. Turning on her heel she headed for her meeting with Drew Caldwell, a man who, to her great relief, had never disturbed her, not once in the three years they’d known each other. Besides, she thought, I have more to think about than some rude, expatriate Aussie.

She found Drew in the living room, watching the television screen. At the summit of a huge mound of broken concrete and tumbled girders, a fire captain in white turnout gear directed the activities of other firefighters and emergency workers as they pulled an injured worker from the rubble.

The writer faced her with a distracted look. "That’s the video of the rescue effort after the construction collapse. Terence Conlon caused that tragedy."

And Terence Conlon’s the reason I’m here, she thought.

The man’s name chilled her, as it had weeks ago, when Drew first mentioned it. She hadn’t thought about him in years, but the anger and pain had returned full blast. Scum. The man was pond scum, with no sense of honor or loyalty. And totally dishonest.

Drew turned off the set, then rose and opened the drapes, flooding the room with light.

"Not if we're outside and you're downwind of me."

"Ah yes,” he said with a smile. “My brother is always on about it, wanting me to stop."

For no reason she could name, she remembered the man on the bluff. “Will I get to meet him?”

“Yes, but you mustn’t tell him what we’re doing. He’d hate my trying to help.”

"Was he one of the workers?"

He shook his head, no. "The architect. He's been accused of conspiring with the builder to defraud the city."

With the video still fresh in her mind,
Jordan
glanced around the room, barely registering furnishings of chrome, glass, bleached oak and white linen.

"Well then, out onto the patio, straight-away," he said, "and we’ll spare you the effects of second hand smoke."

In a courtly gesture reinforcing her long-held impression of a polished English gentleman, he extended a hand to usher her outside.

“Mind the step,” he said, pointing to the ground. On the patio, he pulled out a chair for her. Another image of the stranger surfaced. She doubted he would be as polite.

The wicker creaked as they sat at a glass topped table. Behind Drew's right shoulder, she caught a glimpse of the bay and sunlight fracturing like crystal on the water.

"You must find the accusations against your brother hard to take," she said.

“Deucedly.” Worry creased his forehead. His blue eyes snapped with defiance even as they reflected the cobalt sky. "I refuse to believe he’s responsible for any part of what happened.”

She remembered reading about the accident. The media had implied that approved designs had been altered and substandard materials used by the builder in a scheme to cut corners. That if not directly involved, the architect had perhaps looked the other way. The official “no comment” from inspectors and other city officials had done nothing to curb negative speculation.

“Ethan would never have sanctioned dishonesty.” Drew slashed the air in a gesture of denial. “I'm certain that whatever took place happened without his knowledge. Conlon obtained a court order keeping my brother out of the site, didn’t he? Why do so if they were partners in a conspiracy?"

"Doesn’t Ethan have a legal right to inspect the project?"

"I don’t mean to go on about it, but you have no idea who we're dealing with here." He tipped the ash from his cigarette. "And really, that's the point."

"With that collection of awards inside, I wonder what is the point of hiring me,”
Jordan
said.

"When you came to me and volunteered to help I realized you could bring a fresh perspective to this investigation. You know none of the people involved and very little about the accident itself. You’re the ideal person to help me prove my brother is innocent."

Jordan
winced. She hadn’t told Drew that Conlon had long ago been a business associate of her father. That he’d left her father to the less-than-tender mercies of his enemies, an act that destroyed her family.