BOOK: Return of Mega Mantis
6.84Mb size Format: txt, pdf, ePub
Read Book Download Book
ads
Rocks from side to side—have not seen this
Sheds its skin, but just before shedding, it does not eat. After shedding, all it wants to do is eat—Stella SAW skins; they are real. Do we go back to the field???
Awake in the daytime (diurnal) but also goes for bright lights at night
“Wait! Reread the last one!” Lindsey said. “The mantids are diurnal. That has to be the clue we need.”
“But it can’t be the right clue,” I said. “It’s not diurnal anymore. It’s nighturnal.”
“Nocturnal,” sneered Stella.
Night. Noct. Dark was coming fast.
I was beginning to wonder if we’d missed our chance to get the bugs until daylight tomorrow.
“Wait!” I put a finger into the air. “What if the mantids can be fooled by
fake
bright light? Like the ones in Dr. Vanfoofenpoof’s yard?”
The other three stared at me like I was dense, but I knew exactly what I was talking about.
“Damon,” Stella moaned. “Those aren’t that big. Where can we possibly find enough fake light to trick three giant mantids in Riddle?”
“The Drive-O-Rama!” I cried.
CHAPTER 13
BUG TORNADO
As we left Mr. Ranger’s laboratory, the last bit of daylight faded from the sky. But we were still on the hunt for Mega Mantis One and the others.
The Drive-O-Rama’s bright lights would be flickering on right about now, so we had to hurry. We wanted to get the bugs, destroy them, and then find the owner of the original reel and destroy that, too.
That was a lot of homework for one night, but we were on the move!
It was tough riding our bikes over to the Drive-O-Rama with those mammoth-sized packs on our back, but we did it. We came up over a small bluff and spotted the neon sign:
Drive-O-Rama
. The lights at the drive-in were as bright as baseball stadium lights. Mega Mantis couldn’t resist this place. 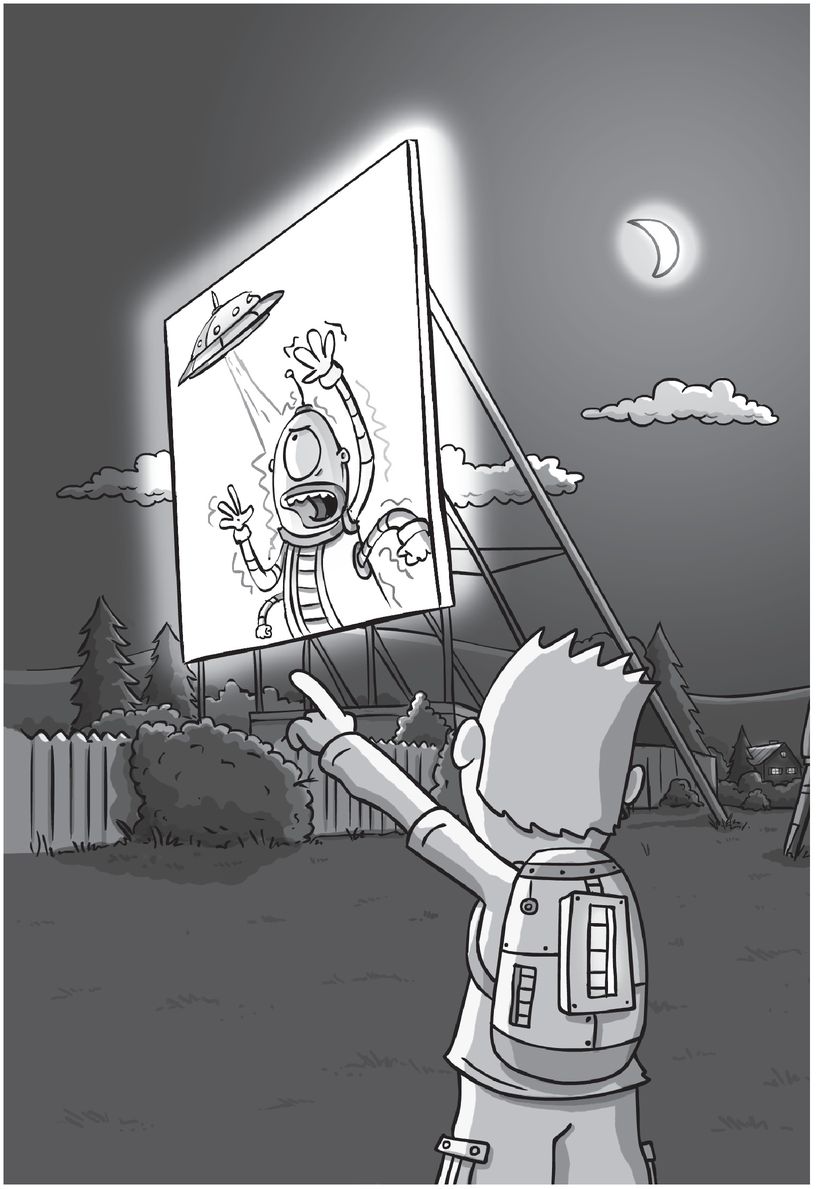 We’d been so busy rushing around to get to the Drive-O-Rama that we didn’t notice the swarm was back. It was bigger than ever.
I slapped Ranger’s back—hard. “Yee-ouch!” he yelled. “What did you do that for?”
“There was a moth the size of my palm on your back!” I said. Then I realized that I’d touched bug goo with my bare hand. I couldn’t wipe it off fast enough on my jeans.
“Back off, bugs!” Stella yelled at the swarm, trying to stomp and shoo at the same time. “Kiiiiiiya!”
Why did she think that a karate kick was the answer to everything?
“We’ll be eaten alive before Mega Mantis even shows up,” Ranger said.
All at once, I heard a loud snap.
Out of nowhere, a cold gust of wind blew past us.
Whooooooosh!
The bugs around us got sucked up into the air like they were being picked up by the world’s largest vacuum cleaner. A tornado of insects whipped across the parking lot.
I saw where they were headed.
“Over there! It’s here!” I screamed. “Mega Mantis One!”
Mega Mantis One was as big, green, and mean as it had been in my backyard. Its battle scars glinted in the Drive-O-Rama lights. It looked like a B-Monster, but this bug was real. It opened its pincers like it was about to strike.
Then, without warning, a
second
mantis crash-landed nearby! Mega Mantis Two raised its front arms and hissed loudly. It looked just like Mega Mantis One, except that it didn’t have as many scars.
Squeeeeeeeeeeeeeee.
“Ack!” I said, covering my ears.
I scanned the parking lot. Why didn’t other people here see what we saw? Some just sat in their cars like statues. Others strolled over to the Drive-O-Rama Snack Shack as if everything were normal. Kids played on the swings located underneath the giant drive-in screen. Didn’t anyone notice the fifty-foot bugs with the blue drool? Wasn’t the B-Force big enough yet? What did it take for ordinary people to see Mega?
“Unbelievable!” Ranger pointed up at the dark sky. There, in the middle of the blue-black, Mega Mantis Three flew into view! It circled overhead like a bird.
Mega Mantis One knew Three was there, though. One reared on its four back legs.
Hisssssssssss.
Stella reared back on
her
two legs and struck a ninja pose. “We need to fire our spray cans—
now
!”
“We can’t!” I cried. “If we shoot RID at the drive-in, we’ll poison all the people!”
“And that would be bad,” Lindsey said.
Mega Mantis Two moved toward Mega Mantis One. They were grinding their cannibal jaws. I knew what that meant. They were hungry for each other and probably for us, too. 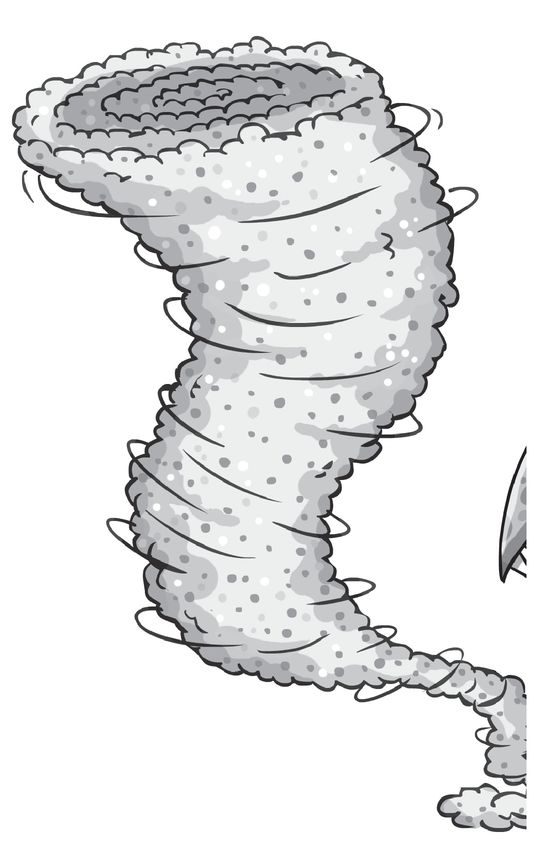 Then the bug cyclone whisked back into view. It was twice its previous size and whirling toward us.
“We have to run!” I cried.
Backpacks on, we ran to safer ground near the Snack Shack. The sound of trumpets blared over the Mega hissing and the swarm buzz. All at once, the very bright Drive-O-Rama lights dimmed.
“Oh no! The movie is starting!” I cried. 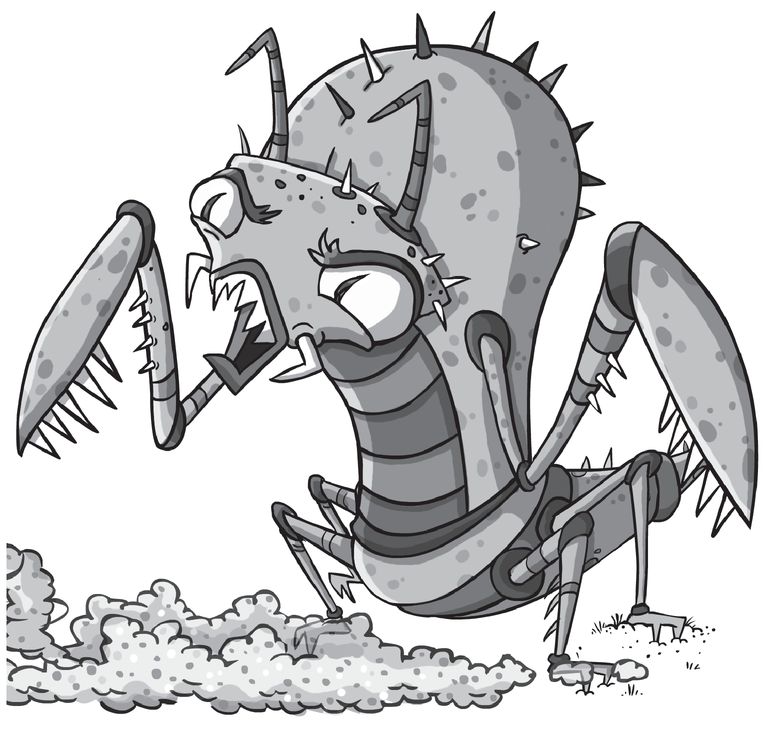 “What are your parents showing tonight?” Ranger asked.
Up on-screen, the title appeared in bold letters.
MEGA MANTIS
Starring G. W. Stinx and Sandra Lee
“I forgot all about the movie schedule!” I cried. “And I just checked it yesterday! How could I have forgotten to tell you guys?”
“What else did you forget to tell us?” Stella moaned.
“Hey!” Lindsey shouted. “Maybe the Drive-O-Rama has the original reel?”
“Good thought,” I said, but I shook my head. “Unfortunately Dad ditched most of his reels last year. He uses DVDs now.”
“That’s still some crazy coincidence,” Ranger said, chuckling.
“Yeah,” I said, looking up at a giant bug on the screen. I would have laughed, too, if I wasn’t about to get body-slammed by one of the giant bugs in the parking lot.
Rrrrrrarrrrrrkkkkk!
Mega Mantis One and Mega Mantis Two moved toward each other like freight cars out of control. They made the ground shake so much, I thought it would split open. The bugs collided, legs thrashing. With one low swoop, Mega Mantis One leaned in and opened its jaws wide. Then
cruuuunch.
One bit off Two’s head!
“Eeeeeeew!” we all yelled.
Lindsey snapped a photo just as Mega Mantis One spit out the head.
Bleeeech!
I thought I was going to throw up.
The large mantis head bounced into the parking lot like a volleyball from Coach Dunne’s gym class. The headless bug body crumpled to the ground.
Up on-screen,
Mega Mantis
the movie finally began. Mega Mantis One turned to the screen and raised his front legs like he was about to attack. He thought the movie mantis was real!
B-Force spun through the parking lot, whipping up dirt and grass and litter off the ground. I saw some ordinary people acting differently. Couples rolled up their car windows. Kids let out squeaks and screams. It was just like what Leery had said. If the B-Force was strong enough . . .
Everyone
would see the bugs.
The Drive-O-Rama had become Chaos-O-Rama. Thankfully, the crowds of people only saw the bug tornado. If they’d seen Mega Mantis and the other enormous mantids, who knows what would have happened?
The Monster Squad watched as headless Mega Mantis Two staggered into the field next to the drive-in. Mega Mantis One turned away from the movie screen and raised his large front legs. Something was coming. His antennae stood straight up.
Rrrrrrarrrrrrkkkkk!
Out of nowhere, Mega Mantis Three swooped down and crash-landed on Mega Mantis One. Their combined screeches sounded like a bunch of dolphins with the volume turned all the way up. I thought my ears would explode.
Sqweeeeeeeeeeee.
“Damon? Damon, is that
you
?”
Somehow, I heard a voice calling me through all the noise.
Mom?
“Damon! Thank goodness you’re all right,” Mom said. “What’s happening? Where did all these bugs come from?”
“Um . . . um . . .” I was completely speechless. Was I supposed to tell her the
truth
?
“Have you seen Rachel?” Mom cried. “She was with us in the Snack Shack and then she vanished . . .”
Vrooooooooom.
I glanced up as Mega Mantis One and Mega Mantis Three took off like airplanes. The downdraft nearly blew us over. We ducked as the massive bugs zipped around in a loop-dee-loop formation. Then they landed back near the Drive-O-Rama screen. They were still drawn to the too-bright screen light and the movie mantis!
Mom looked a little bit panicked, but she only seemed worried about the little bugs. Thankfully she could not see any of the Mega B-Monsters . . . yet.
“Mom, maybe you should go back into the Snack Shack and look for Rachel,” I suggested. “I’ll look out here.”
“Okay, but hurry,” Mom said. “The TV says there’s a big storm coming. We have to find your little sister!” She ran back to the Snack Shack.
I glanced at the parking lot. Or what was left of it. There was a shrill scream we heard above the rest of the commotion.
“HELP ME!”
“Molloy! On the ladder!” Ranger said, pointing. “It’s your sister!”
I couldn’t believe my eyes. Rachel was climbing up the side of the Drive-O-Rama movie screen and she was stranded on the ladder.
“Rachel! Don’t move!” I yelped.
It looked like Mega Mantis One and Mega Mantis Three were about to have her for a Mega snack.
CHAPTER 14
STOMPTACULAR
“Don’t worry! I’ll save you!” I cried out.
I ran toward the movie screen. Ranger tried to stop me.
“Hey, man, I think maybe we need to slow down, you know, because these bugs aren’t so friendly and well, what if the mantids try to . . . eat
you
?”
“No!” I insisted, climbing onto the bottom rung of the ladder. “I have to save her!” I threw the pack off my back and started up.

The Contract by Zeenat Mahal
Far Far Away by Tom McNeal
The Divine Economy of Salvation by Priscila Uppal
End of the Innocence by Alessandra Torre
The Iron Chancellor by Robert Silverberg
Taking Stock by C J West
The Missing Italian Girl by Barbara Pope
Master of the Moor by Ruth Rendell
Sudden--Troubleshooter (A Sudden Western) #5 by Frederick H. Christian
A Long Way from Home by Alice Walsh
Our partner