Read Revelations: Visions, Prophecy, and Politics in the Book of Revelation Online

Revelations: Visions, Prophecy, and Politics in the Book of Revelation 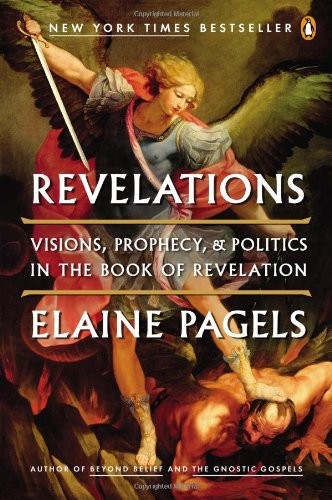 Beyond Belief: The Secret Gospel of Thomas

The Origin of Satan

Adam, Eve, and the Serpent: Sex and Politics in Early Christianity

Reading Judas: The Gospel of Judas and the Shaping of Christianity 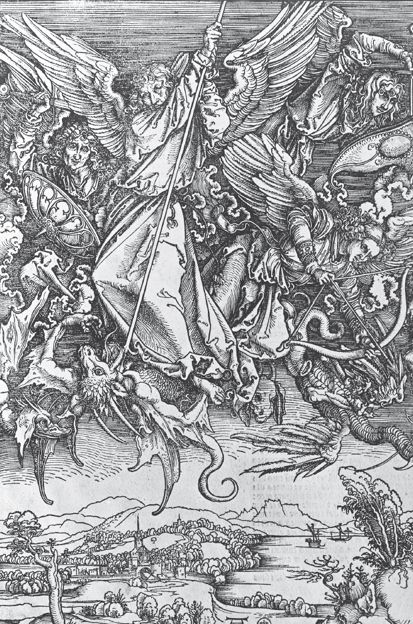 Visions, Prophecy, and Politics in
the Book of Revelation

First published in 2012 by Viking Penguin, a member of Penguin Group (USA) Inc.

Revelations: visions, prophecy, and politics in the Book of Revelation / Elaine Pagels.

To James
with love

Visions of Heaven and Hell:

From Ezekiel and John of Patmos to Paul

Other Revelations: Heresy or Illumination?

How Jews and Christians Separated Politics from Religion

How John’s Revelation Became Part of the Bible

T
he Book of Revelation is the strangest book in the Bible—and the most controversial.

Instead of stories and moral teaching, it offers only visions—dreams and nightmares. And although few people say they understand its powerful images and prophecies, the book has been wildly popular among readers for two thousand years. Even today, countless people throughout the world turn to it to find meaning, and many Christian groups claim to see its prophecies of divine judgment being fulfilled before their eyes. Millions fear being “left behind” when the end comes, as Tim LaHaye’s best-selling book series warns, and believe that they are seeing its prophesied battles playing out in catastrophic events of recent history. Its visions of heaven and hell weave through literature from Milton’s
Paradise Lost
to the poems of William Butler Yeats and the stories of James Baldwin, and have inspired music ranging from “Battle Hymn of the Republic” and African American spirituals to the
Quartet for the End of Time,
which French composer Olivier Messiaen wrote and first performed in a Nazi prison camp. Filmmakers and artists today graphically picture its visions, as Michelangelo, Goya, Bosch, Blake, and Picasso did before them. Christians in America have identified with its visions of cosmic war since the 1600s, when many immigrating to the New World
believed they had arrived in the “new Jerusalem” promised in Revelation. Many have seen America as a “redeemer nation” that is to bring in the millennium, while others see its present military and economic system as evil Babylon.
1
Political rhetoric still appeals to our nation’s sense of divine destiny—or damns America for its sins.

How did this book speak to people when it was written two thousand years ago, and how does it continue to do so today? These questions led to this book, for, whether we love or hate it, the Book of Revelation speaks to something deep in human nature. I began this writing during a time of war, when some who advocated war claimed to find its meaning in Revelation, which was itself written in the aftermath of war. Exploring how this book has fascinated readers for two thousand years tells us much about ourselves and about how religion evokes such powerful responses—for better and for worse—to this day.

Controversy about the Book of Revelation is nothing new: Ever since it was written, Christians have argued heatedly for and against it, especially from the second century to the fourth, when it barely squeezed into the canon to become the final book in the New Testament.
2
When critics charged that a heretic had written it, its earliest defenders sought to lend it legitimacy by insisting that Jesus’ own disciple John wrote its prophecies, in addition to the Gospel of John. Around the year 260, however, the famous Egyptian bishop called Saint Dionysius of Alexandria challenged their view, pointing out that the style of the two books differs markedly and arguing that the sophisticated gospel writer could not have written such clumsy Greek.
3
Dionysius added that “I have not said these things to pour scorn upon [the author of Revelation]—do not imagine that!—but only to show how different
the two books are,” for he agreed that Revelation had been written “by a holy and inspired writer.”
4
Nevertheless, debates about its authenticity—and its place in the New Testament—persisted. More than a thousand years later, Martin Luther wanted to throw the Book of Revelation out of the canon, saying “there is no Christ in it,” until he realized how he could use its powerful imagery against the Catholic Church, while Catholic apologists turned it back against him and other “protesting” Christians.
5
Many Christians never speak about it; some refuse to read it in worship; others talk about it all the time. The story of the Book of Revelation and how Christians have read it takes us from the time when Jesus’ followers were a marginal and persecuted minority to the emergence of a flourishing movement and then the establishment of the New Testament canon, after the emperor Constantine suddenly took Christ as his patron and made Christianity the dominant religion of the Roman Empire.

Who wrote this book? Why—and how—do so many people still read it today? And what
is
revelation? Are any socalled revelations what they claim to be: messages from God? How can we know whether these visions actually communicate truth about reality or only one person’s projection or delusion? Asking such questions, I realized that what complicates our story is the long-hidden cache of ancient Christian writings discovered in Egypt in 1945—a discovery that includes not only the socalled Gnostic gospels but also about twenty
other
“books of revelation”—most of them quite different from the New Testament Book of Revelation.
6
Many of them speak less about a Judgment Day at the end of the world than about finding the divine in it now. But before we explore these, let’s look at what we find in the New Testament Book of Revelation.

This book opens as its author, John (often called John of Patmos, since he says he wrote it on the small island of Patmos, off the coast of Turkey), tells how he was “in the spirit”
7
—in an ecstatic trance—one Sunday when suddenly he heard a loud voice speaking to him. Turning, John says he saw a divine being announce “what is going to happen soon” to bring on the end of time. John, a Jewish follower of Jesus of Nazareth, believed that this divine being who spoke to him was Jesus, alive after his death, now appearing not in ordinary human form but as a glorious and terrifying presence whose “face was like the sun shining with full force.”
8
John says that Jesus announced that God is about to make war on the evil powers that have taken over the world and that, although the coming cosmic war will destroy the entire universe, ultimately God will prevail, throw evildoers into a lake of eternal fire, and welcome the righteous into his kingdom.

John says that he heard a voice telling him to “come up here!”—apparently a summons to ascend into heaven through a door he saw standing open before him.
9
John says that “at once I was in the spirit,” allowed to glimpse the throne of God in heaven, looking much as the prophet Ezekiel, writing six hundred years earlier, said he had seen it: blazing with fire as flashes of lightning and peals of thunder burst around it; brilliantly gleaming like emeralds, rainbows, sapphires; glorious light flowing into a sea of glittering crystal. As if in a dream, John sees standing next to God’s throne a slaughtered lamb, who offers to show him “what must take place after this.”
10
As angels sound trumpets, the Four Horsemen of the Apocalypse burst forth, the first riding on a white horse and wielding a sword; the second, on a fiery red horse, receives a huge sword “so that people would slaughter one another”;
11
the third,
on a black horse, presages famine; the fourth, on a pale horse, brings death by sword, plague, and wild animals. But before the action begins, John says, he sees standing under the altar “the souls of those who had been slaughtered for their witness to God” crying out in a loud voice: “‘Sovereign Lord, holy and true,
how long before you judge and avenge our blood on the inhabitants of the earth?
’”
12