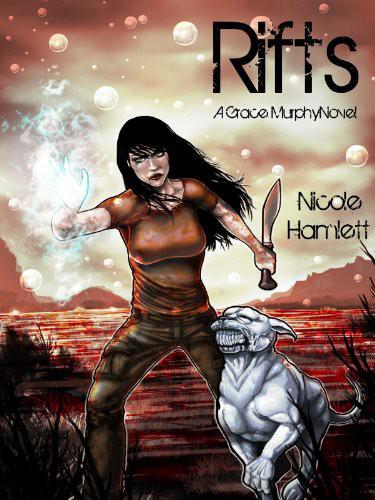 For my Dad, Jim Johansen who has always believed that I could do anything I set my mind to. I love you Pops.

Rifts
is a work of fiction. Names, characters, places and incidents either are the product of the author's imagination or are used fictitiously. Any resemblance to actual persons, living or dead, events or locales is entirely coincidental.

Staggering to my car, I wondered if anyone had gotten the license plate of that Mack truck that hit me. Blood seeped from my chest and I had to force myself not to look down at the stiletto sticking out like a proud flagpole. The sounds of the sirens were still fairly distant. If they were coming my way, I'd still have time to head out before they found me. If she hadn't stabbed me through the heart, I would have stayed but how do you explain to a paramedic that you're going to be just fine with steel sticking out of your chest?

Easing into the driver’s seat was no easy feat. I hunched my chest slightly to make room for the dagger. Bumping it into the steering wheel didn’t seem like the best idea. Breathing hurt, so I tried to keep my breaths shallow. “Don’t think about the pain, Grace.”

Bad tunes were my next best coping mechanism. Probably not the best idea, considering what a horrible singer I am, but it would have to do. When I got nervous, I’d either talk up a storm or sing really bad songs. Since there wasn’t anyone to talk to…I belted out, ”second verse, same as the first!” and started down the road at a sedate pace, hoping to avoid attraction. Ouch. Okay – so maybe singing wasn’t a great idea either.

Blood bubbled from between my lips and I wondered if she'd punctured a lung on the way in. Hey, I wasn't a doctor. I didn't know what this shit meant. I just knew that it hurt and I was feeling worse by the second.

The girl/deer from the middle of the road had beaten the shit out of me without even trying and I'd slammed into her with my car first. I didn't know who she was or what she'd wanted, but I knew that I was
way
out of my league. Dread filled me as her parting words tripped through the gears of my mind.

“Well, well. It looks as though Mother didn't care enough to kill the man who destroyed me after all. Oh, I'm going to enjoy this.”

What did that even mean? Okay, I knew what it meant but I didn't want to. It was a pretty damn good sign that she was related to me. The hows or whys just weren't that clear yet.

"Dial Drew," I said into my Bluetooth. If I were going to be honest with myself, he probably wouldn't give me the information that I needed, but I could try. He picked up after the second ring.

"Hey, Dylan said you were 'mudding' whatever in the world that is. Was it fun?"

"Well if you count kicking a three hundred pound Manticore's ass fun – yeah, it was. But that's not why I'm calling."

"Manticore, huh? Generally not one of the nasties. I wonder what happened there…"

"Yeah, I may have made a mistake. We'll get back to that. So, I was on my way to the store when I hit a deer – except it wasn't a deer. She looked like my Mom, Drew."

I was met with silence.
What a surprise
. Don't get me wrong. Drew has saved my life in more ways than one. I was grateful. But his way of
protecting
me seemed to involve keeping me in the dark.

As a side note for future reference – keeping your heartbeat regulated when your anger is on the rise is seriously tough.

Rivulets of blood started trickling down my stomach into the waistband of my pants. "Drew, she stabbed me. I'm calling you because I need you to be up front with me damn it. I had a pissed off shifter mention something about my mother and then stab me through the heart. I'm in agony here and the blood running down my stomach into my panties is starting to gross me out. So if you could start talking, that would be super."

"Right, sorry. I was just surprised. Where are you?"

"I just passed Rudy's so I'm off of 24. Drew, I'm not feeling so hot. Do you think she poisoned me?" My head was starting to feel fuzzy and the normally picturesque scenery surrounding Old Colorado City was starting to blur.

"It's unlikely that you've been poisoned, Grace. Getting stabbed through the heart hurts. It's perfectly normal to not feel so good. Pull off onto 21st and I'll be right there."

"Do you think that's such a good idea? You blinking in out of nowhere?"

"Pull into that gas station - it will look like I've just come around the building. Don't get out of your car and glamour as much as you can."

"Yeah I'm here. This knife really hurts and I'm so tired. I could use a nap. Could you use a nap?"

“‘kay…" I trailed off again and my mind started wandering. She really caught me by surprise. Yeah,
that's
why she got the drop on me. Let’s face it, I'm not above fighting dirty to stay alive. Honor in fighting is something done by people who don't have to worry about taking care of their twelve year old kid.

My wounded pride wouldn't allow me to admit that she flat out kicked my ass because she was stronger, faster and better. Nope, it must have been because she got the drop on me.

Her resemblance to Diana was uncanny. Well, the true form of Diana. Behind the matted scarlet hair, dirt and blood-streaked skin were delicate bones, large sea foam green eyes and Diana's ethereal glow. It was no small wonder that I'd mistaken her for my mother at first. With that said, I'd like to think that my mother wouldn't have stabbed me in the fucking chest with a knife.

Although maybe… I'd be a little pissed off too if I'd been sucked through a Rift trying to save my ass.

Drew popped into the passenger seat while I was deep in thought. Bad call on his part, because my fist shot out in surprise and caught him squarely in the ear.

"You get that one for free." He scowled at me and rubbed his ear.

"You should know better than to surprise a wounded woman," I replied, exasperated.

"Riiiiight. How about you get into the back and I'll drive you home. You don't seem to be losing too much blood but I want to check it out more closely before I pull it out."

"You have to stop and get milk first. We're out of milk."

He raised an eyebrow at me. Both of mine shot up in response.

He tried to stare me down. Either he didn't know me as well as I'd thought, or he was ignoring an integral facet of my nature. I am the Queen of Stare Downs. Twelve years as a mother hardens you and gives you superpowers of Guilt and Shame.

"Do you want to tell Dylan that he doesn't get milk in his cereal in the morning? Do you want to tell him that he can't have chocolate milk tonight with his evening snack because you couldn't be bothered to stop at the corner store and get him a gallon of 2% milk… preferably organic?"

Drew began to fidget and squirm. I smiled. "
That's
how you play a guilt trip. There's a Farm Crest up the street. You can stop in there."

"Like I haven't been shopping for this house for the last six months," he groused. "I know what kind of milk to buy."

"Be happy I'm not making you stop for the new Lego game."

"Yes, that is indeed something to be pleased about. Stop talking, you're just exacerbating your wound."

"Right, that's what's doing it." I shut up though and crawled into the back seat.

It smelled like a dead carcass back here. Detailing wasn't cheap and I wondered if I could write this off on my taxes. I made a comfortable living as a Romance writer – don't judge – but I was also a single mother with a mortgage and a growing twelve year old boy.

If I wasn't buying new shoes every week because his feet wouldn't stop growing, I was doubling my grocery budget because he was always hungry. I hadn’t had much time to write lately with the nearly constant training. Something that Marisol – my agent – wasn’t letting me forget, and this Hunter business was getting expensive.

We rode in silence with a two ton elephant sitting between us. Drew wasn't telling me something big and I was almost afraid to ask. Okay that’s a lie - I was terrified of the answer he would give if I asked the question that had settled on the tip of my tongue.

He coughed a little under his breath and I barreled into the opening.

"Did you say something?"

"No, just clearing my throat. Allergies."

"Drew, you don't
get
allergies."

"Oh," He paused, searching for the right lie. "Must be the dry air."

"Orrrr," I drew the word out. "You're looking for a way to tell me why I just got my ass kicked by someone who looked like my mother."

"Don't you think that talking about it now while I'm relatively calm is a better idea than after you pull this knife out and I’m back in fighting shape?"

"Nope, I can't say that is a better idea." His mouth quirked up in a grin and I couldn't help the somersaulting of my stomach. God, he was so pretty.

Deeds of Men by Brennan, Marie
The Man Who Loved Books Too Much by Allison Bartlett Hoover
Death on a Silver Platter by Ellen Hart
Unsuitable by Ainslie Paton
SLEEPING DOGS (Animal Instincts Book 6) by Chloe Kendrick
That Certain Summer by Irene Hannon
A Tale of Two Castles by Gail Carson Levine
Misbehaving: The Making of Behavioral Economics by Richard H. Thaler
The Hallowed Isle Book Four by Diana L. Paxson
OMEGA Guardian by Stephen Arseneault
Our partner