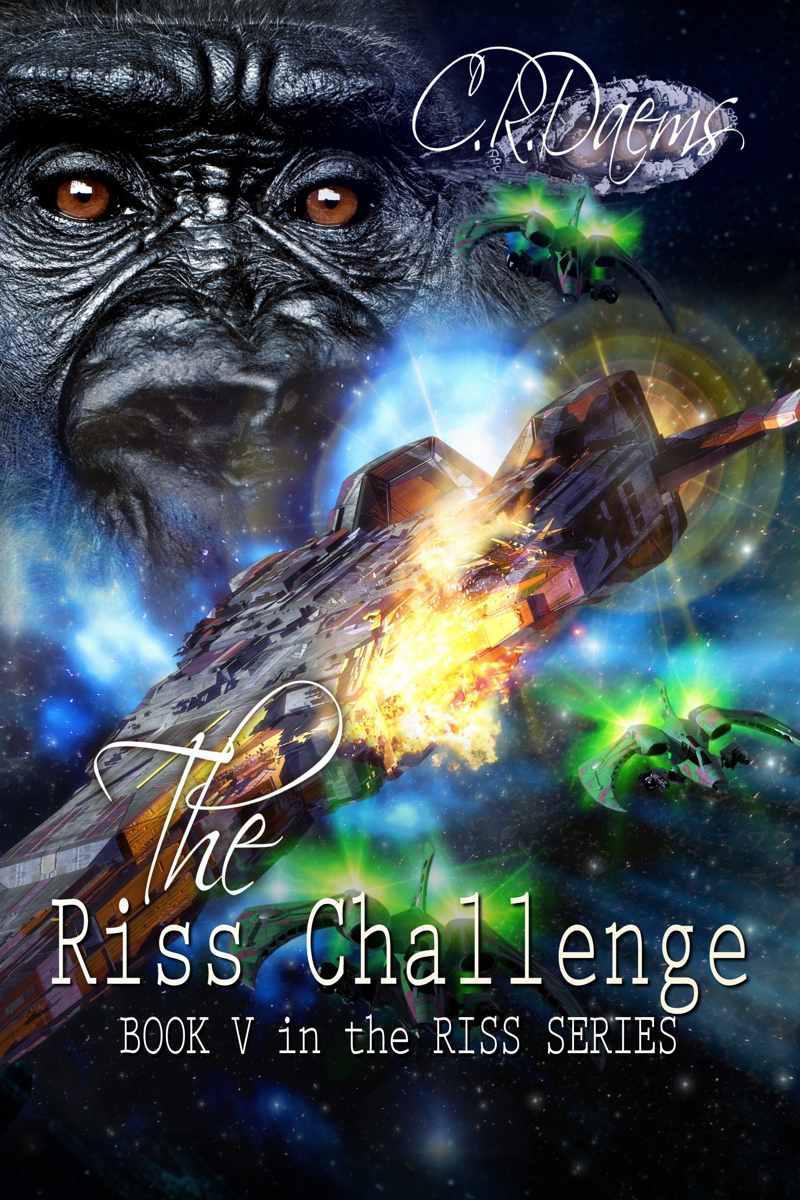 Book V in the Riss Series

No part of this book may be reproduced or transmitted in any form or by any means, graphic, electronic, or mechanical, including photocopying, recording, taping, or by any information storage or retrieval system, without permission in writing from C. R. Daems.

This book is a work of fiction. Names, characters, places, and incidents are products of the author's imagination or are used fictitiously. Any resemblance to actual events or locales or persons, living or dead, is entirely coincidental.

Check out all my novels at:

The war with the galaxy-traveling aliens has ended, thanks to the combined efforts of the Sadr Alliance of Stars (SAS), United Free Nations (UFN), Jahaba Peoples Union (JPU), and Riss. Whether the three nations would have won without the Riss is open to question. However, there is no doubt that the technology the Riss shared with the empires, their cruisers, and their willingness to provide a distraction while the invasion force entered the alien home base saved thousands of lives and shortened the war by years.

As a consequence, on the one hand, the SAS and the UFN want to continue their Mutual Support Agreement (MSA) with the Riss. The JPU, on the other hand, consider the Riss beneath them. While the MSA provided military support, the Riss' primary contributions were technological innovation and support for existing hardware and software. Although the previous MSAs had been verbal agreements between Admirals Plimson and Zhu and Leader Reese, the new agreement was predicated on a formal treaty with the SAS and UPN, acknowledging the Riss as a sovereign nation with autonomous enclaves on Saipha in the SAS and on Dunn in the UPN, and that Freeland was an independent planet belonging to the Riss Nation.

Admirals Plimson and Zhu have agreed to the conditions and returned to their empires, committed to obtaining a formal treaty.

When I entered the Freeland conference room, everyone stood and began clapping. I froze, and my face felt on fire.

"I suspect you've heard the rumors," I said to smiling faces.

"Based on the conversations we've been having while we awaited your arrival, we've each heard several versions," Ni'Shay said, smiling as the room quieted. "Ironically, none of them were all that bad."

"Well, if you will get settled, I'll tell you the one I heard." That provoked snorts and laughs as people grabbed their drinks and found seats. Damaass startled me, when he handed me a cup of kaffa as I stood waiting. I nodded thanks.

"Admiral Plimson and Admiral Zhu want a Mutual Support Agreement with the Riss, to include a sharing of technology and military support. The potential problem with the current MSAs is they are verbal agreements and, therefore, dependent upon Admirals Plimson and Zhu's support. While I trust them, they will someday be replaced, and the current MSAs will depend upon the new SAS Defense Secretary and his relationship with me or my replacement. The same would be true for any personal agreement with Imperial Fleet Admiral Zhu. I felt we needed something more substantial that would survive through the years. I asked that the UFN establish a Riss enclave on Dunn, and that both empires recognize Freeland as an independent planet belonging to the Riss Nation—"

The room erupted into chaos as everyone started talking at once, and the elders huddled together. I made no attempt to bring the room back to order. In a sense, I had usurped control from the elders and citizens of Freeland, although they had been under SAS control since the Battle of Freeland. In reality, the SAS had delegated the responsibility to the Riss, who became the acting government with me as Governor. Finally, the elders returned to their seats, while Ni'Shay remained standing.

"Interesting, Leader Reese. We, the elders, have always been pleased we chose to align ourselves with the Riss. You not only saved Freeland, but we have prospered under your...governorship. We have long recognized that the peoples of Freeland might never be free again, and given a choice, we prefer it to be governed by the Riss than by the SAS. So you have our continued support, but we need to understand the rules, now that the SAS is no longer involved." Ni'Shay sat, his face expressionless as were those of the other elders. I didn't blame them. The rules had changed. If the SAS recognized the Riss Nation as owning Freeland space, that meant the government, the laws...

"Let me assure you that neither the Riss nor I wish to rule the people of Freeland, and that remains the responsibility of those individuals appointed as elders," I said to their visual relief. "Freeland will continue to provide Riss technology maintenance and upgrades for the SAS." I paused for a sip of kaffa, knowing my next remarks would be controversial. "However, the three empires must see the Riss as peacekeepers. It would be very controversial if Freeland were to begin producing warships, but I would like you to build up your merchant fleet. Furthermore, I believe the Freelanders have earned the right for a second chance, and I do not rule out them becoming detached crew on future Riss cruisers."

Again the room erupted into bedlam, as multiple conversations broke out among the various groups. It took a long time for the room to quiet.

"I understand some of the SAS personnel are nervous about letting previous Raiders on warships and more so on a Riss cruiser. You are wondering how I can guarantee the attached crew won't cause trouble. I can't. We can screen people for duty on a Riss ship, but we aren't infallible. But I trust the majority have no reason to betray the Riss, whether they be from SAS, UFN, or Freeland, and in the unlikely event we fail, I trust the Riss. Just as a Riss-human's companion would not allow their human host to violate her ethics, the Riss would not permit anyone to use a Riss cruiser for evil."

"No. I don't think it would be fair to ask crews from different cultures to work together after generations of distrust. It would not create the kind of relaxed environment we want on a Riss cruiser. Detached units would be entirely composed of certified crews from one empire," I said, thinking out loud. "Detached crews may solve another problem," I said, still evolving our new status. "Detached units need vacations if we want to keep them intact. What if we could give each cruiser's detached unit leave together, say for six months every...eighteen months?"

"How would we do that?" Byer asked.

"If we had two certified detached units in addition to what we needed, we could rotate through Eden on a regular schedule and swap the cruiser's detached units with those on standby. That could provide each rotated detached unit with a six-month vacation," I said, looking to Commander Byer and Colonel Seng, senior Scorpion unit commander.

"I like that idea," Byer said, and Seng hesitantly nodded agreement. "Of course, it could mean the replacement unit probably wouldn't be on the same Riss cruiser it was originally."

"Good. Why don't you and Colonel Seng get with you counterparts and work up a proposal for Admiral Plimson, General Garret, and me?" I smiled. "And I'd like the elders to appoint someone to continue work on a prototype for an unmanned sentry—eyes and ears, and maybe later teeth—to guard Freeland space." That generated a lot of questions. The elders had food brought in, and the conversations went on late into the night.

"You have everyone's head spinning, Nadya," Pavao said the next day at a meeting of the Riss-humans. We were relaxing in my conference room, having just finished a lavish dinner of steak fresh from Freeland. "How long have you been thinking about creating these new detached units?"

Saving Grace by Bianca D'Arc
Black Forest, Denver Cereal Volume 5 by Claudia Hall Christian
Lipstick Kisses : A Sexy, Standalone Contemporary Romance by C.C. Cartwright
Miss You Mad: a psychological romance novel by Atkinson, Thea
The Push: A Sequel to The Pull by Sara V. Zook
A Fine Mess (Over the Top) by Kelly Siskind
Valley of the Vanishing Men by Brand, Max
The Dark Highlander by Karen Marie Moning
Girl in the White Dress: Sam's Story by Nikki D. Walker
Mend the Living by Maylis de Kerangal
Our partner