Rock Your Heart Out (Sinful Serenade #3) 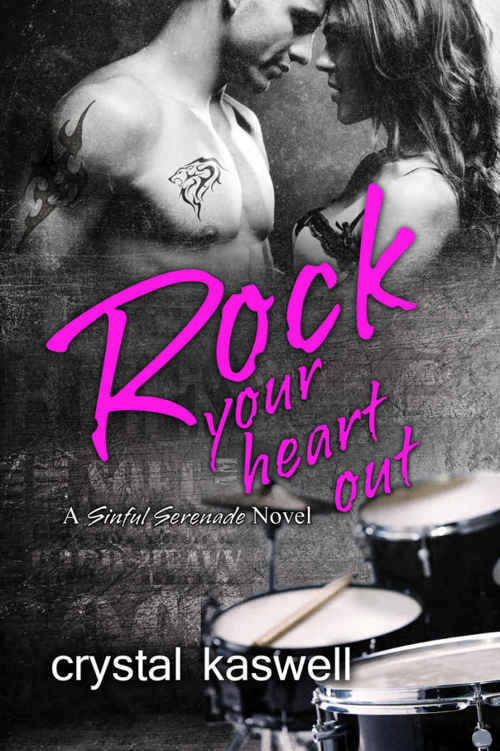 Rock Your Heart Out

T
he room is dark except for the yellow light streaming from under the closed bathroom door. Quiet except for the
tap-tap-tap
of the shower.

Then there's no more
tap-tap-tap
. The shower is off.

I grope the wall for the light switch. Nothing. Still dark.

Okay. No big deal. My brother knows I'm coming. I knock just in case my ETA text messages didn't get through. "Drew. It's me. Take your time."

No response. Maybe he didn't hear me. I go to knock again but the handle turns.

The bathroom door pulls open. Light pours into the main room. It surrounds a muscular man in a soft, yellow glow.

There's a strange naked man in Drew's hotel room, and he's between me and the exit.

I take a step backwards. There's nowhere to go. I'm against the wall. My heart beat speeds up. This guy doesn’t look menacing but that's not enough to convince the nerves in my stomach to settle.

"Hey. Didn't think you were coming," he says.

His voice is calm. Not threatening.

I take a deep breath. This must be an innocent mistake. The guy at the front desk gave me the wrong key.

Please let it be an innocent mistake.

I shake my head. I'm not Alice. Given the way he's standing, tall and proud and utterly naked, she must be a sexual partner.

He reaches for something and the room illuminates. He's no longer highlights on hard muscles. Actually, he's really familiar. Green eyes. Dark blond hair hanging wet around his face. Soft lips curled into a welcoming smile.

I know him. Know who he is.

Relief floods my limbs as I exhale. That's him. Tom Steele, the drummer in my guitarist brother's alternative rock band, Sinful Serenade.

Give or take. Drew isn't really the friendly type.

"Did you change your hair?" he asks. "Your nose maybe? Don't get me wrong. You look good. Just different."

I shake my head. My mouth is too sticky to form words.

My eyes won't co-operate with me. They trace a line down his body. Strong jaw, soft lips, broad shoulders, sculpted torso.

I've seen plenty of men naked in photography classes, but none of them made me feel sweaty and flushed.

To his happy trail.

He's pierced. There's a barbell stud going through the top to the bottom of his tip.

It's impossible to speak. I nod.

"It's an apadravya. Like a Prince Albert but on both sides."

"It's new," he says. "Real new, actually. I'm out of commission for another three weeks. But I still have a mouth and two hands, so hop on the bed."

He steps closer. "You're not Alice, are you?"

Finally, I collect some hint of my senses. "No, I'm sorry." I press my back against the wall. Nerves collect in my stomach. Not fear but embarrassment. "Isn't this Drew's room?"

It is an honest mistake. That's a relief. How did I get this key? At the desk. Asking for Bruce Wayne. It's hard to think given the circumstances. I say the first thing that makes it to my lips. "You're naked."

He laughs. "You're observant."

I can't drag my gaze away from his piercing. "Didn't that hurt?"

He studies my expression. "If you don't like it stop staring."

I press my eyelids together. "Sorry."

"You want to tell me what you're doing in my hotel room?"

"I thought this was Drew's room."

Somehow, I manage to look him in the eyes. That's definitely Tom. We've never met—I was in boarding school when the band was forming—but I’ve seen him in music videos and on the cover of
Rolling Stone
.

Tom pulls a towel around his waist. That makes it easier to think.

"I'm Drew's sister. Willow." I dig into my purse and pull out my driver's license. "Here. See."

Tom glances at the ID then returns it. "You shoulda told me before I let you gawk." He goes to the bed, digs through an open suitcase, and pulls on a pair of boxers. "I don't mind. I'm not shy. But your brother will kill me if he finds out you saw me naked."

There's a tattoo of a lion on his chest. Thick black lines. The pattern continues down his arm, all the way to his wrist.

"I know I'm sexy as hell, but you should probably stop staring."

"I feel you, kid. I'm under strict orders from my piercer: no sex for six weeks." He looks back to me with a playful smile. "Can't even fuck myself."

He's casual with that information.
Hi, I'm Tom, my cock is pierced, I can't fuck anyone for three more weeks. Not even myself.

I press my hands against my sides and force myself to stare at the wall. Okay. We've got this mix up settled. Now I have to figure out what the hell I'm going to say to Drew about why I'm here. The truth isn't an option.

Tom's voice pulls me out of my thoughts.

"Hope I didn't scare you." He smirks and motions to his now clothed crotch. "I know it's a monster."

I clear my throat. "I wasn't expecting a naked man in my hotel room."

"Intrigued?" He raises a brow.

My cheeks flush. "I've never seen a, uh, piercing like that before." I press my lips together before I shove my foot into my mouth. "I have a lot on my mind. That's all."

His eyes pass over me. "If you need something—money a place to stay–I can arrange that."

I study his expression for a clue to his intentions. He seems earnest but I don't trust my instincts when it comes to men. "No thanks. It's a family thing."

Tom raises an eyebrow. "As you wish." He taps a few numbers into the hotel phone's keypad and brings it to his ear. "Hey. You two finished? I ran into your sister at the front desk. You want me to bring her over?" Tom laughs at whatever Drew says. "I know. I wouldn't. I'm too beautiful to die." He sets the phone back in the receiver. His eyes meet mine. "He's ready. Room 417."

"Sure." It's too mortifying to tell anyone. "Good night." I grab my bag, sling it over my shoulder, and reach for the door.

"There are leaked pics of me online. If you need to take another look."

D
rew's arms are folded over his chest. His dark brows are furrowed. His dark eyes are filled with frustration.

"What were you doing in Tom's hotel room?" Drew asks.

"Talking." I play with my bag's shoulder strap. "It's good to see you too."

"Yeah." He pulls me into a stilted hug. His eyes fix on mine. "Well, if he tries to cross the line, let me know and I'll kick his ass."

I keep my voice calm. It must be possible to reason with Drew. In theory. "Isn't Tom your friend?"

Even I can see that. "Consider me warned."

Drew stares at me, tearing apart my intentions. He softens. "What's wrong, Wil? You look terrified."

I swallow hard. "I need a place to stay for a few days."

The door behind us opens. Kara Kendrick, Drew's girlfriend, pops out. She's wearing her sweater dress backwards and her usually straight brown hair is a messy tangle.

"Hey Willow! It's good to see you. It's been forever." She pulls me into a close hug. "You look good. Your hair looks pretty long."

"Thanks." I run a hand through my thick brown hair. "It's getting a little much."

"You would look cute with long bob. Or black. Something dramatic to celebrate being a college grad." She slides her arm around Drew with a wistful sigh. "One more month and I'll be free too."

"Then two years to get your teaching credential," Drew says.

She nudges him. "Technicalities."

Drew clears his throat and motions to the door. "Kendrick. A little privacy."

She squeezes him tighter. "No."

She smiles, happy as a clam, and kisses Drew on the cheek. His frown fades away. Until he's... smiling? That's weird. Drew doesn't really smile.

"You look like you're gonna pop a vein, baby. Nobody wants to talk to you when you're pissed." She runs her hands through his hair. "Your poor sister is probably worried you're gonna hit someone if she tells you what's up."

"Bet you already threatened to hit somebody," she says.

She throws him a stern look and pulls her hands to her sides. "You get into a fight and that's going to be the last time you touch anyone for a while."

Damn, I don't remember Kara being such a badass. I make a mental note to ask her for tips on dealing with difficult men.

Drew stares into her eyes. "You're bluffing."

"Try me." Kara pulls him into the hotel room and motions for me to follow. "Couch is clean. I swear."

The room is a suite, with a bedroom and a separate coffee nook. I move into the latter and plant on the couch.

Drew sits next to me. "What happened?"

I take a deep breath. I can't explain that Bradley moved in next door. There's no telling what Drew will do. "I have an issue with one of my neighbors. He's really... difficult. I can figure it out. I just need a few days to think."

Drew stares back at me. "If someone is giving you trouble, I'll talk to them. Take care of it."

No. Drew takes care of things with his fists. "It's nothing. Just that I can't deal with it right now. I'm applying for this job at a studio in the city. It's mostly boudoir, people who want sexy photos of themselves to boost their confidence or as gifts for their partners."

It's an awesome gig, at the best studio in Northern California. But I still need ten photos, ten sensual photos of a model in various states of undress, if I want to apply. I need a new model ASAP but there's no way I'm asking my brother or his girlfriend to pose in lingerie.

I look back to Drew. "It's a great opportunity. And the application is due at noon. So..."

"So?" He stares back at me. "Is that supposed to convince me to drop it?"

"Until noon. Please." I cross my fingers. There's almost no chance this will work.

Kara steps into the room with two glasses of water. She hands one to me and the other to Drew.

He gets up and plants a kiss on her lips. "Give us a minute, baby. This is kinda personal."

She stares back at him. I know that look. It's the
do I trust Drew not to threaten violence
look. Answer must be yes, because she nods and takes her turn kissing him.

Half Past Dead by Meryl Sawyer
Stormy Cove by Calonego, Bernadette
All That Followed by Gabriel Urza
The Seductive Impostor by Janet Chapman
Sword of Light (The Knights of the Golden Dragons - Book One) by Reaves, Troy
Checkered Crime: A Laurel London Mystery by Kappes, Tonya
In My Time by Dick Cheney
The Rose Garden by Maeve Brennan
Hotel of the Saints by Ursula Hegi
The Seeking Kiss by Eden Bradley
Our partner