Rosa returned to Paradise Square just as the fairy-bunny trumpeters were announcing the arrival of the king and queen. Phew!

From the sky, Rosa could see that the square around the crystal catwalk was full of fairiesÂ â not just from Sparkle City, but from other fairylands too. Rosa beamed when she spotted Fern, one of the fairy princesses' best friends from Star Valley. Fern was jumping up and down and waving. She looked gorgeous in a long, delicate orange maxi-skirt with chains of matching orange beads around her neck. And there was HoneyÂ â Rosa's cousin. She'd come all the way from Shimmer Island! 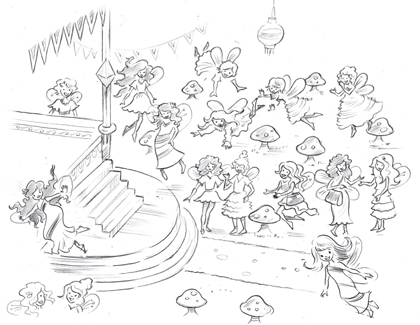 Rosa zoomed towards the floating rainbow curtain to join her fairy princess friends. Behind it the first models stood ready. Everyone fell silent as the fairy king and queen appeared on two crystal thrones at the head of the catwalk. You could hear fairy dust drop, it was so quiet, thought Rosa. Her wings tingled with excitement, knowing the show was just about to begin. This was it!

“Welcome, fairies,” announced the king. “The fairy queen and I thank you for attending this fashion show to celebrate our jubilee.”

“We're so looking forward to seeing the outfits, put together by our very own fashion fairy princesses, Rosa, Bluebell, Buttercup and Violet,” the queen added.

The four fairy princesses stood nervously behind the rainbow curtain with the other models, waiting for the show to start. Rosa sneaked a peek through the curtain at the crowds of fairies and felt her tummy bubble with nerves. She
so
hoped everyone would like their designs! 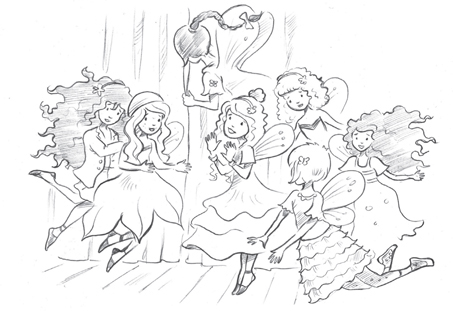 “And now, let the show commence!” The king stomped his walking stick on the ground, and the fairy-bunnies began playing a fast, fun melody.

“Buttercup, go!” Rosa said, and the fairy princess fluttered through the rainbow curtain and up on to the catwalk. She wore the halo hairpiece and the yellow daffodil summer dressÂ â perfect for a day like this, Rosa realized.

She held her breath as the king and queen and the hundreds of fairies in Paradise Square watched on. Rosa reached out and grasped Violet's hand tightlyÂ â her heart felt like it would leap out of her chest at any moment.

And then applause began to ripple around the square. Louder and louder it came, as more of the fairy models took to the glittering catwalk.
They like it!
thought Rosa.

Holly was up on the catwalk now, fluttering slowly along in the petal-bottomed strapless dress. The sunlight shining on the crystal walkway made everything glow and look extra magical. There was Violet in the purple suit with the strawberry bracelet and then Bluebell in the blue organza dress and shell earrings. 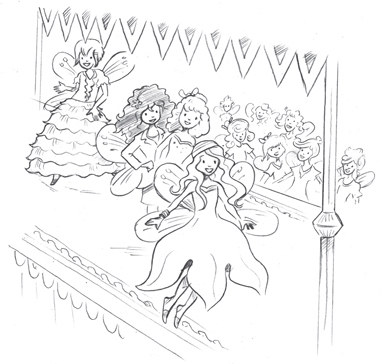 Rosa glanced at the fairy king and queen. They were clapping furiously too, with big smiles on their faces. She was so glad they were getting the jubilee show they had wantedÂ â well, so far, anyway. But what about the final outfit? With moments to go before she had to appear in the jubilee dress, Rosa dashed into the dressing room.

“Rosa, you're next!” a fairy-helper called through the curtain.

Rosa took a deep breath, and flew out before she could change her mind. She fluttered up to the catwalk and took her first few steps along it. The fifty-layered dress was amazing to walk in. The silk train floated on the gentle breeze as if it were flying, and the layers rose and fell like little fabric wings. On the catwalk, Rosa felt like she had a hundred spotlights on her, such was the glow from the crystal walkway catching the sun. Her face ached from smilingÂ â she couldn't stop grinning as the audience clapped harder than ever. And there were her three best friends watching from their places at the end of the catwalkÂ â their eyes wide in surprise, beams across their faces. Rosa knew they'd be wondering how she'd fixed the fifty enchanted jewels to her dressÂ â because there they were, sparkling around the neckline. Light bounced off them, splashing bright colours around Rosa as she gave a delicate twirl. 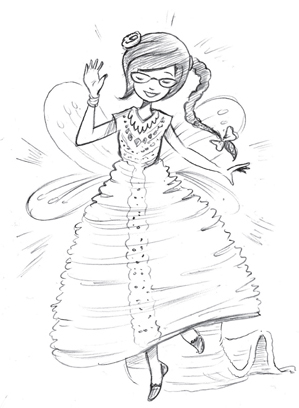 Then Rosa walked a few more steps to join all the other models at the end of the stage.

“How did you do it?” Bluebell whispered to Rosa.

“I remembered seeing the loops of shimmer shoots in Jewels and Gems, and how their silvery stands held everything in placeÂ â and I suddenly realized that we could do the same with the jewels on the dress.” Rosa glanced down. The shimmer-shoot threads wound around the jewels and caught the light like silk whiskers, making the dress look even more magical.

“But where did you find them?” asked Violet.

Rosa grinned. “In Twinkle Meadow of course! That's where all the shimmer-shoots grow.” Rosa stopped talking, her voice drowned out by the roar of the crowd. The other models left the catwalk while the four fashion fairy princesses curtseyed to the king and queen. The king held his hand up for silence. 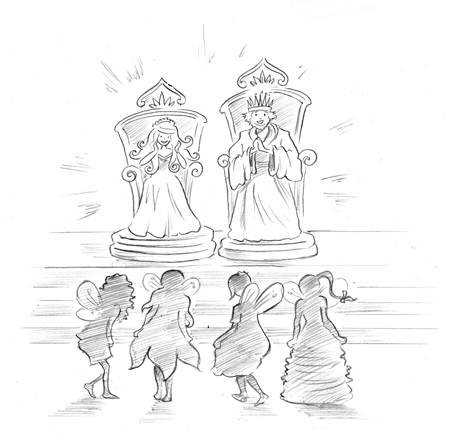 “Congratulations!” the king and queen boomed together.

“That was the most amazing fashion show Sparkle City has ever seen!” said the king.

“The outfits you designed were both spectacular and practical,” the queen added. “I know we'll be seeing your designs on the Sparkle City streets very soon! And the final piece was stunningÂ â a dress fit for a jubilee!”

“We haven't forgotten about your reward,” said the king.

Rosa put her hand to her mouthÂ â the Paradise Square stone! The king and queen may not have forgotten, but with everything that had happened,
she
had!

At the edge of the square, a dozen tiny fairy-helpers surrounded one of the pavement stones, covering it with a golden velvet veil.

The fairy princesses zoomed down to the pavement. They watched, speechless, as the helpers pulled the velvet cover away. Rosa caught her breath when she saw the words engraved into the stone in sparkling silver. 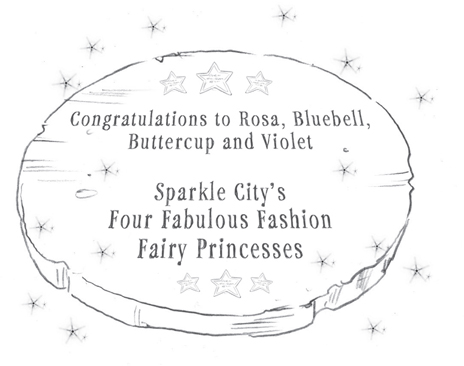 The crowd applauded yet again as the four friends joined in a group hug, circling their Paradise Square stone. “We did it!” cried Rosa. She looked down at the sparkling words and a warm glow of happiness flooded through her that had nothing to do with the hot sun. What a magical day it had been!

If you enjoyed this

book then why not visit our

Explore the enchanted world of the fashion fairy princesses

Find out which fairy princess you are

Make your own tiara

Colour in your own picture frame and much more!