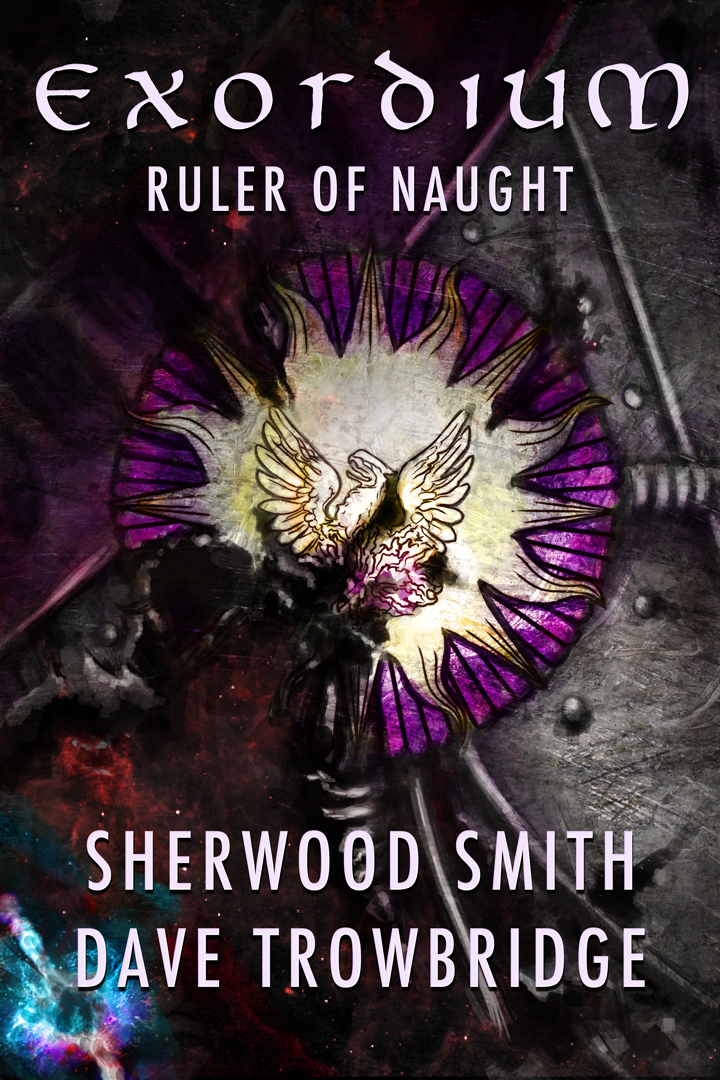 The gnostors of Hypostatics will tell you that
space-time is isotropic, that there is no center: all locations are equally
central and equally peripheral.

But every
haji
knows different. Those who survive that pilgrimage know there is a place
different from all other places, a Center to the sentient universe.

From orbit, Desrien at first appears no different from
any other planet cherished by humankind: a blue-white sphere marbled by
cloud-whirls, a sight resonant with memories of the Exile and our lost Mother.
But there are no Highdwellings. Aside from the Node, here uninhabited, the only
stars in the night sky of Desrien are those placed there by the unimaginable
Hand of Telos. The planet lies open to space, unprotected by the webs of forces
and vessels so familiar to interstellar travelers.

It does not need them. Those who are uninvited do not
land, or if they do, they do not leave again. Unmappable, unnavigable, alone
among all worlds Desrien stands exempt from the Jaspran Unalterable of Free
Passage. For there is found an interface between the transcendent and the
mundane that flouts the metrics of our sciences and defies the power of our
machines, where Totality is unknowable except through human senses and
perceptions.

Desrien is the heart of an immense engine, powered by
the sleeting archetypal energies of the Nous, the emanations of the
trillion-fold mentalities in the Thousand Suns that are focused there by the
mystical lens of the Mandala. There, stretched tight by the weight of dreams,
the skin of the world is eminently fragile. The featherweight blow of a single
thought can open a wound through which myths both fearful and beloved erupt
into the waking world, so that the pilgrim enters fully conscious into the
Dreamtime of humanity and walks among archetypes awakened into the light of day.

Every visitor to Desrien who truly surrenders to its
mysteries thus confronts enfleshed the myths by which they live—which may not
be the ones they thought they knew.

The title Haji, then, is an honored one; but those who
bear it rarely speak of what they saw and lived on Desrien. It is enough that
their lives are wholly changed.

In the place of the Omnipotence there is
neither before nor after; there is only act.

There was nothing, in no time, neither perception nor
non-perception. Neither movement nor non-movement, neither identity nor
difference, neither eternity nor boundedness.

There was a blow, impalpable, disturbing nothing. Nothing
dwindled and resolved, rising through depths of abnegation to the awareness of
a flame, suspended in a darkness evocative of incense and the faint tang of
fresh fruit. Beyond the flame a golden blur, sharpening to a vast face of
inhuman calm indwelling with transhuman compassion, its lips curved in a smile
terrible with possibilities, knowing everything, rejecting nothing.

The bodhisattva Eloatri gazed up the Buddha. The faint scent
of green tea from the kitchen beyond the dharma room tickled her nose. She let
the sensation go, not thinking about it, merely experiencing it.

There was no sound. Above, the narrow windows against the
roof admitted the pale light of false dawn, barely illuminating the riotous
profusion of images that framed the gilded statue of the Awakened One. The
vihara was asleep around her; alone among the sleeping monks and nuns their
abbot meditated.

Had been meditating. There was no one in the room; no reason
for whatever had breached her repose in the higher dhyanas. Eloatri closed her
eyes.

There was nothing, in no time, neither perception nor
non-perception...

There was a blow, impalpable, and nothing fled before a
flare of light resolving into the nine-headed form of Vajrabhairava, the
terrifying aspect of the bodhisattva Manjushri, who is the strength of the
spirit of the Buddha. Locked in sexual union with his consort, trampling beasts
and men underfoot, his thirty-four arms juggling the flaming sword of knowledge,
his eighteen-fold gaze sought her out, pinned her against the darkness. With a
terrible smile he sought her, the sword transforming to a silver sphere which
he hurled at her head and Eloatri shouted and opened her eyes to the calm of
the dharma room.

The echo of her shout died away, replaced by the soft slap
of bare feet in the corridor behind her. She ignored the presence behind her,
breathing for a time until her heart slowed, gazing into the compassionate eyes
of the Buddha. Meaning would come when it would come. Rising to her feet in a
fluid motion that belied her eighty years, she clapped her hands before her and
bowed deeply to the Buddha. It was time.

She met the calm eyes of the monk Nukuafoa, then his eyes
widened as she removed the blue cord knotted around her waist, and put it into
his hands.

“The Hand of Telos is upon me,” she said. “And my third
hejir
is before me. You are chosen.”

He bowed. She felt the pressure of responsibility settling
around him, she felt his question as she walked to her cell, where she
collected her staff and cloak, begging bowl and sandals.

Then she left the vihara that had been her refuge for
twenty-one years, driven out upon the third pilgrimage of her life, devotee and
victim of that Unconditioned which humankind calls Telos, on a planet called
Desrien.

The lock of the shuttle hissed open on a spacious garden,
severe in aspect.

Anaris rahal’Jerrodi recognized it as the formal rooftop
landing area of the Palace Major. Tall spindles of foliage formed narrow
windows on distances soft in the morning sun.

Anaris strode down the shuttle ramp, the familiar scents catching
at his throat. The complex of emotions evoked an Uni word he’d had no occasion
to use since he’d returned to Dol’jhar:
Home.
Recognition overlaid
amusement on his speculations about the purpose of his father’s sudden summons.
When he’d last stood here, he’d been on his way back to a Dol’jhar that existed
only in his mind, distorted by time and youthful memory.

Here, on the highest point in the Mandala, all was air and
light, softly drowning the black garb and rigid postures of the Tarkan honor
guard drawn up facing the shuttle. Harsh ozone from the shuttle overlaid more
subtle, resinous scents. Anaris inhaled deeply, reveling in a sense of
expansiveness, and turned towards the lift adit for the Ivory quadrant, where
the Palace Minor lay. Why had the pilot landed the shuttle sideways?

A double-thunderclap pulled his attention upwards, then
another. His skin prickled. High above, jagged contrails scarred the sky. He’d
felt the
Fist of Dol’jhar’s
ruptors fire, just once, yesterday.
Then
the comm filters came down, hard.
No one had told him who, or what, they’d
fired at.

There had been no response from the Dol’jharian interdiction
system hastily installed when Mandalic protocols took down all planetary defenses,
so whatever was going on, it was some distance from the Palace.

Anaris shot a glance at his new secretary at the foot of the
ramp behind him. Morrighon flinched, his gaze turned downward toward his
useless compad. Anaris had only been able to discover that Juvaszt,
kyvernat
of the
Fist of Dol’jhar
, had been ordered down shortly afterwards.

And now my father summons me.
This must be the next
step in the succession duel. Watching for any hint of why it was happening at
this moment, Anaris took a step toward the Ivory lift.

“Your pardon, Lord. The Avatar awaits you this way,” said
Morrighon, as he gestured towards the Phoenix adit directly across from the
shuttle’s lock. The secretary’s voice had a resonance reminiscent of the
mindripper, an insinuating whine that turned everything he said into a complaint
against the universe at large.

He has reason to complain.
The Bori was short, dumpy,
with an asymmetric, pockmarked face and a widely divergent gaze. Anaris
wondered how Morrighon had escaped culling.

His ugliness alone had made Morrighon Anaris’s first choice
to replace the secretary purged by Eusabian when Lelanor’s presence on the
Fist
was discovered. Anaris still had not found out who had reported his
secreted lover, forcing him to kill her in front of his father to spare her
death by torture.

He doubted it had been Morrighon. All the records he’d found
about this Bori indicated a love of rigid routine and a lack of imagination,
surprising to find in the Catennach, the Bori elite. Anaris wanted just that if
he had to have a secretary. This Morrighon had seemed to be the ideal buffer,
busying himself endlessly over minutiae. His inevitable reports to Barrodagh
could be easily shaped.

Best of all, Morrighon’s cullish appearance, grating voice,
and low ranking in the Catennach hierarchy would have made his assignment an
insult had Barrodagh offered it, so Anaris’s choice overthrew all calculations.
Including, perhaps, his father’s.

This meeting will be interesting, at the very least.
His father had the advantage of established power. Anaris had the advantage of
being the sole surviving heir—he was not expendable. And he had grown to
manhood here in the Mandala, from where his father now ruled the Thousand Suns.
I was a hostage then. I will not be a hostage now.

Amusement flared again as they approached the Phoenix lift
adit along an avenue of pleached trees ablaze with sweet-scented blossoms in
every shade of red and orange. Anaris knew where the lift would deposit them.
My
father’s touch, part of purging the Panarchist poison.

As expected, the lift debouched them at the inner end of the
antechamber to the Phoenix Hall, a long corridor lined with the busts of former
Panarchs and Kyriarchs, set in alcoves. When they passed the bust of the
Faceless One, Anaris wondered what the Avatar had made of that symbol of
refined Panarchist revenge.

Anaris lengthened his stride, impatient with the roundabout
route his father had prescribed. He could hear Morrighon’s breath rasping in
his throat in counterpoint to the echoing clatter of boots on marble as the
Bori struggled to match his pace. Morrighon’s lumpy body looked ridiculous in
an ill-fitting tunic, the gray of service personnel. More ridiculous were the
three communicators clipped to his waistband, plus the compad clutched fiercely
under Morrighon’s left arm.

As they left the antechamber, a shadow flickered across
their path and melted into the opposite wall. The leading Tarkan grunted and
jerked his weapon up.

“Ni-Dolchu karra bi-stest j’cha!”
exclaimed another
of their escorts—
Dol-forsaken lurking demon-spawn
—in tones that combined
superstitious fear and long-suffering acceptance of a condition that couldn’t
be helped.

Controlling his own spike of reaction, Anaris continued on
his way, forcing the Tarkans to scramble to keep ahead of him. He’d recognized that
flicker. Old resentment sent blood surging to his head, but puzzlement was
equally strong: what had reactivated that old trick of Brandon’s?

But the Arkad was dead. Anger faded.
The best his shade
can contrive is a computer-generated haunting.
Anaris laughed sardonically,
which caught the Tarkans by surprise.