Read Safe Without You Online 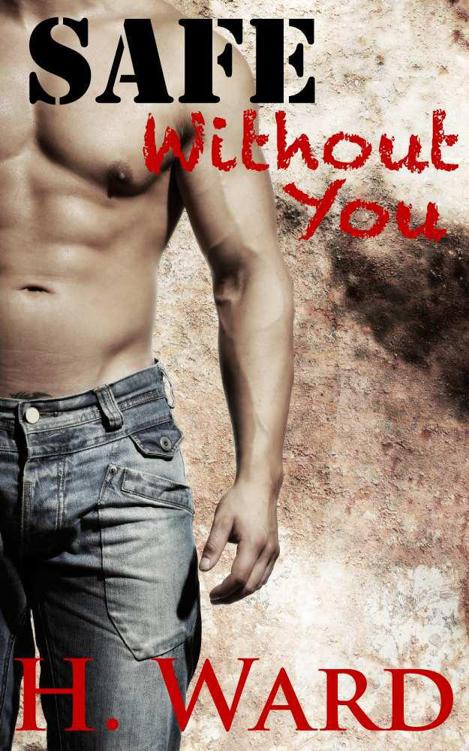 ALL RIGHTS RESERVED BY AUTHOR

All characters appearing in this book are fictitious. Any resemblance to real persons living or dead, other than those in the public domain, is not intended and purely coincidental.

No part of this book may be reproduced, re-sold, or transmitted electronically or otherwise, without express written permission from the author.

Have you ever traveled alone?  Traveling by yourself is on one hand the most exciting and exhilarating thing you can do and on the other, it can be like now: boring.  Not just twiddle your thumbs boring, but mind-numbingly dull—which is basically just another way of saying lonely.  Being
alone
is one thing; being
lonely
is entirely different.  I’m good at alone.  I’ve spent a good chunk of my life being alone, but I’m terrible at being lonely.

So what’s the difference between being alone and being lonely?  The difference is confidence.  When you’re confident, challenging things just look like a project to tackle.  Like figuring out how to take a bus somewhere when you don’t speak the language, or deciding whether the cute guy you just met is looking for a friend, a free meal, or just a place to park his dick for the night.  When you feel confident, you can generally work it out.  The problems happen when you start to doubt yourself.  Fear creeps in and the thing you are most afraid of isn’t someone lurking in the dark alley beside your hostel, you’re afraid that you will make a mistake—a terrible, unredeemable, mistake.

I’ve been good at avoiding mistakes by keeping to myself for most of my life.  Being an Air Force brat doesn’t give you much chance to put down roots or make a lot of solid friends.  The school shrinks tell you all that motion makes you more flexible, that it makes you better at adapting to circumstances, but what they really mean is that it makes you better than most people at being alone.  There’s nothing like walking into a new class in the middle of the school year and being greeted by twenty-five pairs of critical eyes to make you want to keep your own company.  It’s the eyes—and the whispers—that are unnerving.  In case you had any doubts, the whispers will let you know just how wrong your clothes are and why you’ll never fit in or how you’ll never have a date to prom.  And it doesn’t even matter that you would rather poke yourself in the eye with a sharp stick than fit in with the mean girls, no one wants to hear that they aren’t good enough.

By the time I graduated from high school, I had been to nine different schools in six states and three foreign countries: Italy, Turkey, and the Netherlands.  Somehow I had managed to go to kindergarten through second grade in Louisiana, and 4
and 5
grades in Illinois.  And the last two years of high school had been in the Netherlands.  People always go, “Wow—Holland, that’s so cool!  Did you smoke a lot of dope in the coffee houses?” but when your father is a full colonel working for the NATO joint command, it’s not like you get much chance to check out the reefer, and besides, that was never really my style.

What I mostly did in Holland was ride a bike—not some fancy mountain bike with a lot of gears and knobby tires, or a titanium road bike, thin as a whisper.  Nope, in Holland, everyone pretty much rides either a one speed with foot brakes or maybe a three speed with hand brakes.  And just about every Dutch person rides a bicycle.  There are bike lanes and bike racks and special bike paths absolutely everywhere, and you can pretty much ride a bike from one side of the country to the other.  For me, freedom was never about smoking a joint.  Freedom was a heavy black ‘grandma’ bike with a basket and fenders and a cover over the chain.  And don’t think that biking is easy in the Netherlands just because it’s flat—those winds off the North Sea are fierce.

I had some friends in Holland.  I got close to a couple of Dutch girls I met by accident at a concert—Lieve and Mirjam.  Like most young Dutch, their English was great, which was a good thing, because my Dutch was terrible.  I never managed to learn more than how to say hello, and thank you, and this is nice, but then, I never tried that hard either.  The three of us traveled around Europe for a couple of months after high school, and we had a lot of fun doing the usual things—sleeping on trains to avoid having to pay for someplace to stay, reading and writing poetry, picking up cute boys.  But then Lieve and Mirjam went home to start university, and I just went.  My parents were under the impression that I was going to go back to the states for college, but I kept bouncing around Europe.  In the winter, I made my living teaching English, despite my total lack of credentials, and in the summer I worked as support staff on bike tours for rich Americans.  My Spanish is good and my Italian is excellent, and while my French is just passable, together they helped to keep me employed.  All of my jobs were under the table, but tax evasion is a universal pastime in most of Europe.

After three years of that, though, I was bored—in the thumb twiddling kind of way, just restless, and ready for a change.  My parents kept trying to coax me to go to college, but I couldn’t really see the point.  Lieve and Mirjam were so stressed at university they couldn’t even find time for a beer together when I’d land back in the Netherlands, and they certainly didn’t have time to get laid.  Not that I’m a slut, mind you, but I’m a modern woman.  I’ve been vaccinated for HPV and Hepatitis B, and I’d never screw
anyone
without using a condom.  As a free spirit and professional loner, though, I don’t put a lot of stock in things like love at first sight or the value of a wedding ring.  You’re a liar if you say you don’t want to get your rocks off, but any girl with a brain in her head should know not to expect old-fashioned virtues like fidelity and honesty from men.

It took a few weeks of scouring the Internet, but finally I found a job prospect in the New World.  An American adventure travel company was looking for bilingual staff to help run tours in Panama.  There would be beach activities, and then up to the rain forests for ziplining and whitewater rafting and horseback riding.  Nothing that really required too much effort on the part of the participants, but that would, nonetheless, impress their friends back home.  I wrote a couple of stellar recommendations for myself from fictional tour company owners in France and Spain, and included impressive looking pictures of me with a bicycle in the Pyrenees, and one of me on a rocky beach in Sicily.  They hired me immediately after a phone interview, and a week later they sent a one-way plane ticket from Amsterdam to Panama City.  One thing all the moving around taught me is how to make a good impression—as long as you’re not one of the mean girls.  Older adults always find me charming, and I know how to make people think that I’m smart and responsible.  I can make small talk with anybody, and my charms work especially well on men.

My parents saw me off at the airport.  My father sighed and my mother cried, but the Colonel nonetheless slipped $300 in my pocket when he hugged me good-bye.  I think in his heart he knows his career is to blame for my inability to settle down.  My mom begged me to Skype at least every other week, and my dad gave me the usual instructions about being careful.  Like a good daughter, and because I really do love my parents, I promised to do as they asked, and somehow, when I said it, I meant it.

Eight weeks after I arrived in Panama, I had Skyped my parents once, and the tour company I was working for had gone bust.  I never saw a paycheck for my second month of work, and found myself marooned in Panama with the $300 my dad gave me, and $112 left from my paycheck for the first month.  At least the company had fed and housed me—until they skipped out.  I knew my parents would buy me a plane ticket to leave, either back to the Netherlands or to my grandparents in Kansas, but I realized I was tired of flat places, literally and figuratively.  I was sure that just like in Rumpelstiltskin, with a little creativity, I’d find a way to spin straw into gold.  I just had no idea what the price of that might be.

“Is this seat taken?”

Amber turned in the direct of the soft baritone voice inquiring about the availability of the bar stool next to her.  Her eyes skimmed over his very masculine form, noting the finely tuned musculature that his snug t-shirt and low slung, straight legged, jeans showed off.  He was good looking and he knew it, she surmised.

“No, help yourself,” she turned back to her mojito and her thoughts.

The metal legs of the stool screeched annoyingly across the concrete floor as he dragged it away from the bar.  He stopped and lifted it, giving Amber an apologetic look, “Sorry about that.”

“No problem,” Amber said, as she raised her glass to take a sip.  Her eyes studied his features over the edge of her glass.  He had faded blue eyes and a tanned face with little weathered creases at the corners of his eyes and mouth.  He was clean-shaven, and his sandy hair was short on the sides, with longer bangs that tended to flop in his eyes.  The lines of his cheeks and jaw were well proportioned, manly—but refined.  All in all, one would have to say that the man taking a seat next to her was very handsome.  The only defect she could identify, if you could even call it that, was a scar that ran from the middle of his left eyebrow over the bridge of his nose and into his right cheek.  His tan made the razor-thin white line more evident, and the scar might have been barely noticeable on a paler man.  It somehow brought to mind a swashbuckling rogue from a classic Hollywood movie, but then again, he looked entirely modern.  She guessed he was five or six years older than she.

“How’s the mojito?” he said as he gestured toward her glass.

Clearly he wanted to talk, Amber gathered, okay then, she would talk.  “Not bad, but if you’re looking to get a buzz on, the rum punch is quicker.”

“What, do I look like a bar fly or something?” he smiled.

“Not really, but generally people drinking alone in beach bars in foreign countries are looking to get away from something.”

“A beer,” he said to the bartender before turning back to Amber.  “Very perceptive.  So what’s your excuse?”

Jenna's Promise by Rebekka Wilkinson
Nevada (1995) by Grey, Zane
Ink by Amanda Anderson
The Hot Rock by Donald Westlake
How Happy to Be by Katrina Onstad
With a Tangled Skein by Piers Anthony
Heartshot by Steven F. Havill
Claiming His Fate by Ellis Leigh
Deadly to Love by Mia Hoddell
The Pagan Stone by Nora Roberts
Our partner