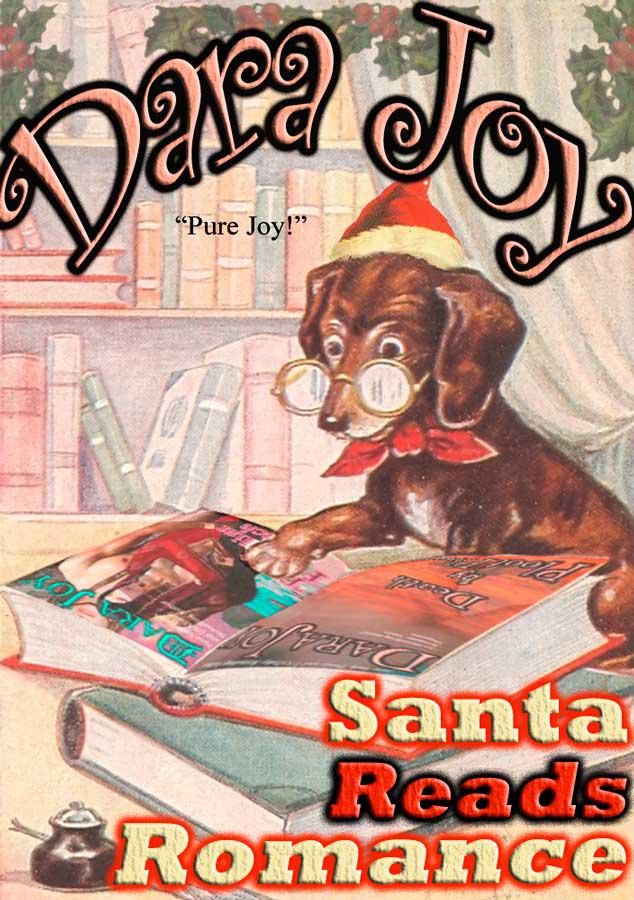 BOOK DESCRIPTION: *This was written to be a lengthy novella. (Much longer than a story- but not as long as a novel.)

A DELIGHTFUL, WARM-HEARTED CHRISTMAS STORY BRIMMING WITH LOVE AND LAUGHTER!

“A romance writer decides to take some time to seclude herself in a cabin, so she can finish up her latest masterpiece. But when a publisher dressed as Santa Claus ends up arriving during a snowstorm, she experiences something that she has only experienced through the characters in her novels. 5 stars.”- Erika S, reader

“Continuing her tradition of tickling the funny bone, Dara Joy gives us SANTA READS ROMANCE, about a mismatched duo, a frustrated publisher and a feisty romance writer, snowbound in a remote cabin with only a Christmas puppy for company. Readers won't want to miss this fabulous holiday treat!”- ROMANTIC TIMES MAGAZINE

“I have never read Dara joy before and I was surprised. She is a funny and witty writer! This is a sure 5 star read…” - Tracy T, reader

Hailed as a break-out talent and publishing phenomenon by Publisher's Weekly, Dara Joy has written eight consecutive New York Times and USAToday bestselling novels. Over the span of her career, she has consistently been an Amazon bestselling author, hitting single digits on multiple Amazon best-seller lists, including Amazon’s Top 100 and the Top Movers and Shakers list. Millions of Dara’s books have been sold worldwide and translated into numerous languages, including German, Norwegian, Chinese, Korean, Russian, Spanish, Japanese, and Thai.

MERRY CHRISTMAS AND HAPPY HOLIDAYS TO ALL!

Other titles by Dara Joy:

KNIGHT OF A TRILLION STARS

TASTE OF THE DEVIL

All rights reserved. No part of this book may be used or reproduced in any manner whatsoever without written permission, except in the case of brief quotations embodied in critical articles and reviews. For information address House of Sages at
[email protected]

Visit Dara Joy on the World Wide Web at:
WWW.OFFICIALDARAJOY.COM

It is illegal to send an e-book to a person who did not pay for the copy or to post a copy of an e-book anywhere on the internet or offline for public consumption. By purchasing this e-book you are legally swearing not to take part in any of the aforementioned illegal practices. If you know of someone who is distributing e-books illegally report to
[email protected]

Who stood up on his chubby hind legs and danced

Who unlocked every door and cabinet in my house

simply to prove a point
,

Who bravely captured tie-wraps and wrestled them to death

with his patented immobilizer
,

Who slept with me when he thought I wasn't looking
,

Who always came when I called his name

and stayed with me in my darkest hours
,

Who passed on to loving memory

the day I completed this story.

W
riters.
They were the bane of his existence.

Unfortunately, they were his bread and butter too.

C. Hunter Douglas slammed the heel of his hand against the steering wheel of the rental car.
What came into their strange little minds that caused them to react so… so…

They had to be from another planet. Probably plants of an alien race, put here to slowly drive the sane mad.

He peered through the windshield into the darkness.

A snow squall had sprung up out of nowhere, adding to his rising irritation. The Weather Channel had conveniently left this piece of information out of its travel report this morning. He should have realized. Maine. Christmas week.

It was a trip only a sailor returning home from war or a desperate publisher would attempt to make.

His hand slammed on the wheel again.

Normally he was not a violent man, but the idea of grabbing the oh-so-talented Rex Stevens by the throat and slowly squeezing the air from his self-indulgent lungs held great appeal. He'd show the horror writer something really scary. A pissed-off publisher.

What was he going to do?

Publicity and marketing had been set in motion, a book tour ready and waiting, appearances on talk shows, tie-ins… Shit, the whole thing was going to fall apart!

He had counted on this. Placed all of his dwindling profit-margin eggs in Rex's basket of frightening words. His uncle had made some terrible financial decisions; Hunter had been called in to clean up.

Everything would have been nice and tidy if the “writer”— he grimaced at the word— had delivered as contracted!

When the manuscript had still not arrived three weeks after the deadline, an uncomfortable, nauseous feeling had settled in the pit of his stomach.

It was a feeling he recognized.

He had called the man and his agent several times, leaving message after message. The agent was in the hospital for his ulcers (Hunter bet he knew why), and Rex had not returned his calls.

So Hunter had flown up to Maine.

He would've flown to Timbuktu to get his hands on that manuscript.

Only when he arrived on Rex's doorstep in this godforsaken rural town, the house keeper had cheerfully informed him that Mr. Rex was not there.

Mr. Rex was in Sri Lanka.

In search of himself.

She watched the sparks fly up the chimney as if it were the most interesting sight she had ever seen. Unfortunately, the amazing spectacle was over in less than a minute.

She sighed, wondering what else could suddenly capture her attention. Surely something?

Her green eyes began to cloud over at the subliminal suggestion.

You must come to me…

Her shoulders scrunched up as she tried to fight off the insistent voice.

Get your butt over here!

May desperately scanned the room, searching for an important task that needed to be done immediately. Perhaps the ceilings needed vacuuming? Never mind that they weren't her ceilings— anything was better than staring at that empty screen.

This was the stupidest idea she had ever had.

And she had had some whoppers.

When her neighbor Billy had told her about his cabin in Maine, May had practically begged him to let her use it for a few weeks. It seemed the ideal hideaway where she would write, diet, and reflect.

She could remove herself from the temptations of everyday life, finish her book, and maybe lose a few pounds at the same time.

Most importantly, she would not be surrounded by well-meaning family and friends who smothered her in sympathy invites at Christmas. The holiday that never failed to remind her: a) she was alone; b) she was alone and; c)
she was alone.

It was supposed to be “the great escape.” After all, she would be working; she had the perfect excuse to turn down all the invitations.

Everything would be accomplished in one fell swoop.

Only it hadn't quite worked out that way.

Even though Billy had warned her that the cabin was remote, secluded, and had little in the way of conveniences, she had somehow ignored all that, her inner sights focusing on a new and improved May. A May armed with a
completed
novel.

After two days here, she was beginning to question the wisdom of the plan.

The one-room cabin with kitchenette was starting to get on her nerves.

What ever had possessed her to come here equipped with only a laptop, a sack full of frozen diet dinners, a giant box of Cheerios, and ten pounds of Braeburn apples? What kind of diet was that?

Thankfully, she couldn't bear the thought of giving up coffee cream, so she at least had a small carton of Half-and-Half to stare at and dole out like liquid platinum.

Well, enough suffering! Tomorrow she was going to drive into the little village she had passed on her way to the cabin and lay in some writer's survival supplies. Lots of Chippy Nicks, Chocomongos, and Jelly Wellys. Her stomach growled agreement with the fine idea.

Come to think of it, this cabin was the perfect setting for a romance book.

She giggled to herself. How often had she read that particular story line? Too many times. It was the
plot du jour.
Although she had loved so many of those stories.…

A few snowflakes fell softly against the windowpane.

Her brow furrowed. She hadn't heard anything about snow this morning on the radio. Probably just a small snow shower.

Shrugging, she threw another log on the fire and avidly watched the sparks fly up the chimney.

That's another minute down.

P
erhaps if his mind hadn't been wandering along the lines of throttling his favorite author, he would've noticed the man sooner.

He had just turned down the main street of the town. The snow had picked up in the last fifteen minutes, although visibility wasn't that bad. He should've seen him.

Even though it was just past eight in the evening, the streets were deserted. It seemed as though one moment it was clear sailing, and the next a surprised visage materialized in front of his windshield, followed by a sickening thump.