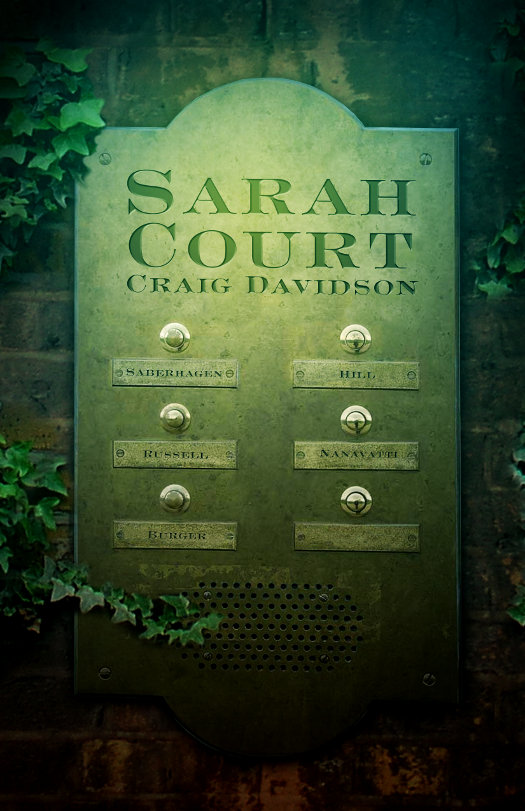 This book is a work of fiction. Names, characters, places, and incidents are either a product of the author's imagination or are used fictitiously. Any resemblance to actual events, locales, or persons, living or dead, is entirely coincidental.

All rights reserved under all applicable International Copyright Conventions. By payment of the required fees, you have been granted the non-exclusive, non-transferable right to access and read the text of this e-book on-screen.

No part of this text may be reproduced, transmitted, down-loaded, decompiled, reverse engineered, or stored in or introduced into any information storage and retrieval system, in any form or by any means, whether electronic or mechanical, now known or hereinafter invented, without the express written permission of the publisher.

No part of this book may be used or reproduced in any manner whatsoever without the prior written permission of the publisher, except in the case of brief quotations embodied in reviews.

Squirrels
cause suburbanites more grief than any
creatures under your sun.

Squirrels tore up my garden! Squirrels ate the seeds
left out for the robins! Goddamn those marauding
buggers!

I’d laugh, were I capable.

The Eastern Gray Squirrel,
sciurus carolinensis
,
is, on average, fifteen inches from nose to tail tip.
Weighs, on average, one pound. Pick up a pair of wire
cutters. Snip your pinkie finger off below the nail.
The size of a squirrel brain. A homo sapiens’ synaptic
clusters produce enough bioelectricity to jumpstart
a Chevrolet. A squirrel’s fail to produce enough to
jumpstart a wristwatch.

Yet despite their many handicaps, they consistently
outwit humankind. I’ve seen a grown woman crouched
in her nightgown on a freezing winter morn lubing
her bird feeder pole with bacon grease. Saw one man
shoot a squirrel with a twelve-gauge Remington.
Obliterate it. To quote an old aphorism:
There’s a
difference between scratching your ass and tearing big
lumps out
.

Sarah Court had squirrel problems for years.
Until its residents domesticated them. “Ushering
hobos from gutter to penthouse,” according to one
disgruntled homeowner.

Sarah Court: a ring of homes erected by the
Mountainview Holdings Corporation. Cookie-cutter
houses put up quick. Residents digging gardens
will encounter broken bricks and wiring bales
haphazardly strewn and covered with sod. In a
town twenty minutes north of Niagara Falls. Grape
and wine country. Crops harvested by itinerant
Caribbean fieldhands who ride bicycles bundled in
toques and fingerless gloves even in summertime.
A town unfurling along Lake Ontario. Once so
polluted, salmon developed pearlescent lesions on
their skin. Ducks, pustules on their webbed feet.
They seizured from contagions in their blood.
Children were limited to swimming in ten-minute
increments.

You really are such magnificently grim bastards.
Trashing utopias is how you party.

A town where, as they say, everybody is in
everybody’s pocket. Where any resident can ask
another resident if they have seen any other resident
and the answer will be: “I’ve seen him around.”
Everybody is always seeing everyone else, around.
A town where those who suffer a flat tire are apt
to drive on the emergency spare for six months.
Whose more corpulent residents have been spotted
Whose more corpulent residents have been spotted
HOUR FAMINE with no discernible hint of irony.
Whose denizens have been collectively referred to
by graceless out-of-towners as resembling “your
standard roller derby audience.” A town you cannot
truly label multicultural, though its undertaker does
craft specialty coffins for Muslims to be interred
on their sides facing Mecca. He also receives a fee
from town coffers for indigents who are interred
in industrial rollpaper tubes: basically, toilet paper
rolls roomy enough to fit one deceased hobo.

A town where young men barrel out of downtown
boozers to find their gaze fastened upon the starstudded sky, gibbous moon tilting over the low
architecture and streetlights of St. Paul street,
knowing this is it—their place in the world. A town
where if you get away, you get away young. Otherwise
inertia locks you into acceptance. A town where men
return to their old high schools after the bars shut
down. Always a case of warm beer in somebody’s
trunk. The “Mobile Party Kit.” They huddle on
bleachers talking about that football game they
lost but how afterwards they scrapped the winners
and sent them home bust up. A town adept at
reconfiguring losses as wins. One friend inevitably
challenges
another
to
a
hundred-yard
dash—
“Track’s right there, fucko. You chickenshit?”—so
they run drunkenly yet somehow desperate, warm
beers in hand, on legs already turning soft round
their bones.

A town where most work at fabrication plants,
dry docks, Redpath Sugar. Half a lifetime at one
mind-crumbling task: pressing sheet metal into
fenders or arc-welding ships’ hulls or filling bags
with ice tea mix. Drive past the GM factory at six
a.m.: greenhorns coming off skeleton shifts pin-eyed
and pasty as arctic zombies while older men with tin
lunchboxes festooned with Chiquita banana stickers
punch in. Men forever smelling of acetylene sparks,
industrial glue, unrefined sugar. Who smell of such
on their marriage altars and will smell of such in
their coffins. Or should their lives spin terribly
awry: rollpaper tubes.

A town like so many others, with a “right” and
“wrong” side, delineated by the CN Pacific tracks
cleaved through its heart. How is it so many of
your kind’s habitations are thus separated? As if
when railcars offloaded the town founders, all
the promising citizens disembarked out one side
while the wastrels, knaves, scoundrels, and pariahs
slithered out the other. Go rip open a bag of trash on
the east, or “right,” side: name-brand products. Rip
open a bag on the west: yellow no-name packaging,
Black Cat cigarette butts, bottles of Wildcat lager—
which legend has is concocted from vat dregs recarbonized and sold stone cheap. Sterno Dell’s on
the westside: a wooded bowl strewn with mattress
skeletons
where
rubbydubs
slept
the
summer
months. That is until one shambles dozed off with
his cooker lit and burnt it to an unhealthy blackness.
Had you been hovering above the fire you would
have seen wild animals fleeing all robed in flame. A
sight not unlike solar flares releasing from a sun’s
superheated corona.

Not a town without charm. An escarpment fringes
the southeastern edge; the millennia trickle through
its steep cliffs. The lake’s sailboat-studded green
shading to glassy gold lit by a harvest moon. The
people within its limits are good stock. If anything,
they meet the challenges life throws at them too
quickly. Marriage and parenthood arrive and with
them the cessation of so many wild ambitions.
Some call this an unbeautiful place containing a few
quite beautiful people. Others say this is an oddly
beautiful place containing a few right bastards.

A spot in Shorthills park overlooks town, near
the flame-gutted remains of an El Camino set
afire at a rowdy bush party. Were you to stand on
this overlook while encroaching darkness flattens
the sunlight into a thin red artery between the
apartment towers, you could feel the immensity of
those lives being lived. The windows of those towers
lit thumbprints punched out of the dark. Smoke
from GM smokestacks atomizes above the housing
projects where lawns go brown each summer. People
dancing: in bars, the Ukranian Hall on Louth street,
Club Roma near the ball diamonds, teenagers at
basement
parties—future
mechanics
dancing
cheek-to-cheek with future accountants, plumbers
with lawyers, lives elastic with potential. Fucking
tenderly, fucking brutally, fucking to bring new life
into the fold or satisfy animal drives, entreaties
shrieked, empty promises tendered, headboards
rattled. Dying: breaking through a stock car’s
windshield at the Merritville Speedway, a man’s
body propelled straight as a ballistic torpedo and the
shattering Saf-T-Glass a million bloodied starlings
startled into flight, the white stripe down his racing
suit making him look a lightning bolt forked from
the vehicle’s interior with a helmetful of red pulp
held in place by a shattered jawbone. All those lives
thumping at you. One massive thundering heartbeat.

A professional fistfighter’s expression. Testifying
to the fact that some cuts absorbed during a fight are
so deep or critically placed upon a combatant’s face,
blood cannot be stopped.

Some believe a skull is a skull is a skull. Yet many
of your species have an undeniable sharpness of
bone. Chins, cheeks, ridges where brow meets socket
of eye. Others, thin skin. Others, a fierce heartbeat to
stampede blood through the veins. If your bones are
so sharp the pressure of a blow causes your tissues
to tear apart over them the way a melon halves
itself when dropped upon an axe’s blade, or if your
skin is stretched tight as drumskin and splits apart
easily—as old cutmen say, “his flesh opens with the
frequency of elevator doors”—or your heart pounds
like a tackhammer to bulge your every vein: if this
is you, your blood will run into your eyes, mouth,
pooling in your sinus cavities until all you taste,
smell, all you know is blood.

Blood follows blood other ways. Offspring follows
progenitor. Blood knotted through bodies becomes
the red webs binding you. Imagine a net swept over
the sea bottom dredging up a frenzy of creation: crab
and eel and shark and seahorse and whale caught up
in a thrashing teardrop of life. So much life pressed
skin on skin on skin.

You are barrels packed to bursting. Barrelsful of
frailty, of beauty, of regret, passion, sorrow, envy,
horror, guilt, hope, rage and love and pain. Barrelsful
of everything it is to be afflicted with your peculiar
condition.

So come now, the souls of Sarah Court invite you,
and please—open them up.

Killing Time in Crystal City by Chris Lynch
Armageddon Averted: The Soviet Collapse, 1970-2000 by Stephen Kotkin
Sofia's Tune by Cindy Thomson
Fire Catcher by C. S. Quinn
NO GOOD DEED by McDonald, M.P.
The Next Victim by Jonnie Jacobs
Lust Thy Neighbor by Emily Snow
Extenuating Circumstances by Jonathan Valin
Europe in Autumn by Dave Hutchinson
This Stream of Dreams (Mirella, Rashid and Adam Book 2) by Roberta Latow
Our partner