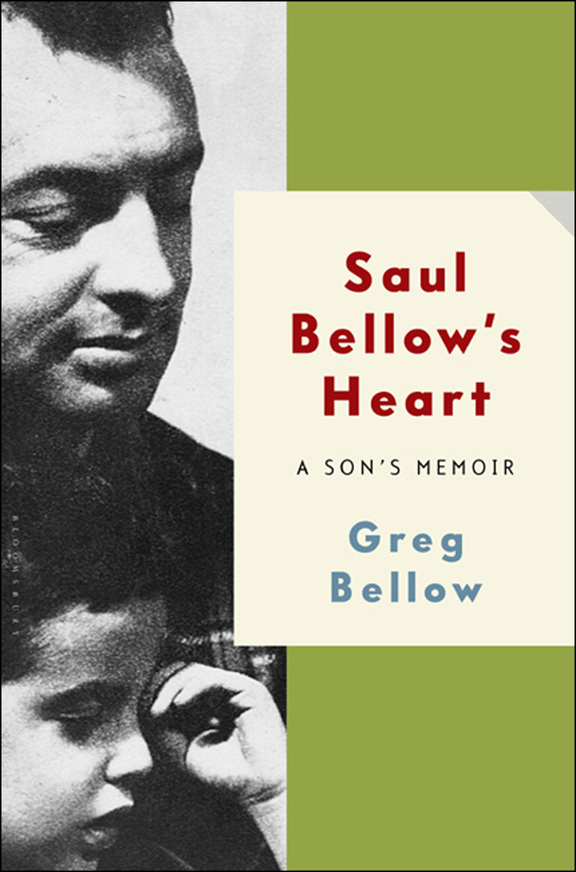 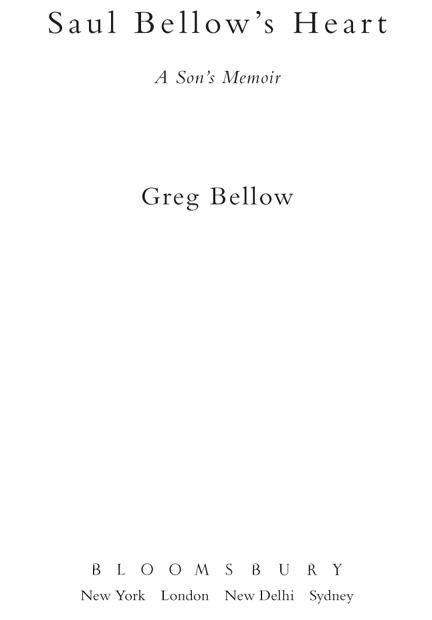 Awakened by a Grave Robbery

Chapter Eight
A Failure at Spirituality: 1977–86

Chapter Twelve
A Glance Back and a Glance Forward

Appendix of Novels and Narrators

To my mother, Anita Goshkin Bellow Busacca,
whose message to me and to all was “Go for it!”

To my father, Saul Gordon Bellow, whose message was
“If you go for it, make sure it’s worthy of the family name.”

And to my wife, JoAnn Henikoff Bellow,
whose faith in me never wavers.

Awakened by a Grave Robbery

On a visit to Chicago when I was eight, I witnessed a terrible argument, in Yiddish, between my father and grandfather. Driving away from his father’s house, Saul started to cry so bitterly he had to pull off the road. After a few minutes, he excused his lapse of self-control by saying, “It’s okay for grownups to cry.” I knew his heart was breaking. I knew because of the bond between my father’s tender heart and mine.

As Saul’s firstborn, I believed our relationship to be sacrosanct until his funeral, an event filled with tributes to his literary accomplishments and anecdotes about his personal influence on those in attendance that set in motion my reconsideration of that long-held but unexamined belief. As we drove away, I asked my brother Dan how many sons he thought were in attendance. His answer, literally correct, was three. I disagreed, feeling that almost everyone there considered him- or herself to be one of Saul’s children. That first glimpse of the extent of Saul Bellow’s patriarchal influence awakened me to the impact of a literary persona I had assiduously avoided while he was alive.

I grew up in a household filled with books and lively conversation, bound together by a commitment to seeking and telling
the truth. I came to share the value my parents placed on culture, which included the quiet solitude that my father thought essential to writing. His study door was firmly closed every morning, a sign of the barrier Saul drew between writing and living. For decades I ferociously protected his privacy, literary and personal, which both of us connected with those hours of his writing day. As a child I learned not to disturb him. As an adult I turned a blind eye to the literary persona and to the public furor over his fame, which reached an apex in Stockholm. After 1976 I boycotted all events held in his honor. Saul became offended, but I felt the limelight contaminated the private bond I was trying to protect.

The posthumous tributes to the author who altered American literature came as no surprise. Hoping that my son Andrew, who took no interest in Saul’s literary career, would learn a bit about a grandfather who had paid him scant attention, I urged him to watch the discussion of Saul that aired soon after his death on the PBS
NewsHour
. The next day Andrew said, “What was all the fuss about Grandpa changing American literature? He was just a grouchy old man.” Andrew’s response succinctly captured a distinction between the private man and the literary lion that was just beginning to dawn on me.

As soon as Saul died, his lawyer, Walter Pozen, set the tone for what was to come. Instead of calling the family, Walter phoned the public media. I learned of my father’s death on my car radio. The chosen speakers at Saul’s funeral were Martin Amis, the literary “son,” and Ruth Wisse, the dutiful Jewish “daughter.” Though no family members were asked to speak, I rose to praise Saul’s widow, Janis, for her devotion during my father’s last years. Strangely silent was another literary heir, Philip
Roth, who, like a kind of brooding Hamlet, wandered the edges of the funeral in deep thought. Soon thereafter, the
New Yorker
published a series of rambling letters Saul had written to Philip about the origins of his novels, which I thought underlined the uniqueness of the deep literary connection between them. I was transfixed as I read these letters because the mental confusion apparent in Saul’s repetitive accounts was like a stream-of-consciousness narrative that filled blank after blank in stories my father had told me.

To keep my grief private, I avoided the flood of obituaries until urged to read Leon Wieseltier’s tribute in the
New Republic
. I was not surprised that he looked up to my father as an intellect or found him a man of great charm and wit. But his tribute was so complete a conflation of the famous author and my father, the man, that I could barely recognize Saul. As well, Mr. Wieseltier seemed to have found the basis of a deep rapport with my father that touched on personal affections I considered my birthright. In the following weeks I heard and read many anecdotes and accounts that claimed a similar special closeness with Saul Bellow the literary patriarch. I took them to be distinctly filial and soon came to feel that dozens of self-appointed sons and daughters were jostling in public for a position at the head of a parade that celebrated my father’s life. By now irked by the shoving match at the front of the line, I asked myself, “What is it with all these filial narratives? After all, he was
my
father! Did they all have such lousy fathers that they needed to co-opt mine?”

Before his death I had purposely placed the private man I did not want to share into the foreground. Infuriating as they were, the filial narratives and flood of posthumous tributes awakened me to the powerful effect of my father’s novels, to his status as a
cultural hero, and to my lack of appreciation of the public side of him that I had been trying to avoid.

As I grieved and as the distinctions between the private man and the public hero were filtering though my consciousness, someone suggested I might find solace in reading Philip Roth’s
Patrimony
. I was deeply struck by a scene in which the elder Roth catches his son taking notes, no doubt in preparation for writing about moments that Philip’s father considered too private to expose. I asked myself, “Has Philip no shame?” But Roth’s decision to write about his father’s last days forced me to think about what to do with the father who resides within me—a man whose deepest desire was to keep his thoughts and his feelings strictly to himself.

Among the myriad ways Saul protected his privacy was an almost complete refusal to reflect aloud upon his inner life. He abetted this lack of transparency by giving ambiguous answers to personal questions or by offering parabolic stories with meanings that could be extracted by a perceptive listener or reader. As he and I walked down Boston’s Commonwealth Avenue in 1990, out of the blue my father said: “Your old pal Oscar Tarcov thought Ben Turpin was a very funny man. In a brief film sketch about moving into a new apartment, Turpin carried furniture up several flights and carefully arranged it. Turpin’s redecorating concluded when he threw a couch through the living room window, shattering the glass. Asked why he did not open the window first, he answered, ‘I’m an artist. I can’t be bothered.’ That’s the way it was for your mother and me.” After fifty years of decoding his stories, I knew Saul was telling me about the cultural attitudes and unconventional behavior that held my parents’ marriage and our young family together.

At a Bellow family dinner several weeks after Saul’s death, an argument broke out over the recently declared war in Iraq. My brother Adam maintained that our government’s actions were correct and legitimate while I vehemently questioned the war’s rationale and its ethics. Later, my cousin Lesha (Saul’s niece, Grandma’s namesake, and my senior by six years) commented that watching us disagree was like watching “young Saul” (me) argue with “old Saul” (Adam).

Our father was always easily angered, prone to argument, acutely sensitive, and palpably vulnerable to criticism. But I found the man Lesha called “young Saul” to be emotionally accessible, often soft, and possessed of the ability to laugh at the world’s folly and at himself. Part of our bond was grounded in that softness, in humor, and in the set of egalitarian social values I adopted. Saul’s accessibility and lightheartedness waned as he aged. His social views hardened, although he was, fundamentally, no less vulnerable. The earlier tolerance for opposing viewpoints all but disappeared, as did his ability to laugh at himself—much to my chagrin. His changes eroded much of our common ground and taxed our relationship so sorely that I often worried whether it would survive. But Lesha’s comment highlighted the essential biographical fact: there could never have been an “old Saul,” the famous author, without the “young Saul,” the rebellious, irreverent, and ambitious man who raised me.

The impulse to write a memoir that gives equal weight to the lesser-known “young Saul,” the father I love and miss, meant going against a lifetime of keeping a public silence to protect his privacy and our relationship. But I was also swayed by important external considerations. I wanted my children to learn about their grandfather. And I felt an obligation to open wide
the eyes of my two younger brothers, who know only “old Saul” as a father. Several recent biographical articles of poor quality alerted me to the scholarly need for a portrait that reveals Saul’s complex nature, one written by a loving son who also well knew his shortcomings. I have found Saul Bellow’s readers, toward whom he felt a special love, intensely curious about the man whose fame rests partly on the complexity of his prose, partly on his desire for privacy, and partly on a lifetime of hiding behind parabolic stories, jokes, metaphors, and complex logical rationales when they suited his needs.

But what truly prompted me to write are the intense dreams that have taken over my nights. As my father’s presence faded from my daily thoughts, I was often wakened from an anxious sleep, desperately trying to hold on to fleeting memories. I took my nocturnal anxiety as a warning from a recently deceased father to preserve what remains of him before it is lost—perhaps forever.

For decades my father told me stories about the past, mostly in private or in the company of family, often over late afternoon tea. Friends and family have added impressions and vignettes—charming and not so charming. I have eagerly listened to narratives accompanied by astute observations and politely endured others so wildly inaccurate as to be amusing. For every story I am told, I know ten, and by now my memory has become a repository of the complexity and the humanness of Saul Bellow, the man, the father, and the author who wrote from his head and his heart. Awakening as the dreamt stories threaten to slip away reveals my fear that those treasures will be lost if not put to paper.

Continuing to turn a Sammleresque blind eye to Saul Bellow’s
literary fame would also be to ignore lessons I learned right after my father’s death: that writing was his raison d’être, so much so that I honored his life by rereading all the novels in temporal sequence as my way to sit shivah (to formally mourn); that all the posthumous filial narratives were more than the grave usurpation I considered them to be at first; that writing primarily from memory and about feeling suits me, a recently retired psychotherapist skilled in unraveling murky narratives. And perhaps most important, that my father looked most directly into the mirror when he wrote, providing, through his novels, a window into his frame of mind and a reflective self he took pains to protect in life.