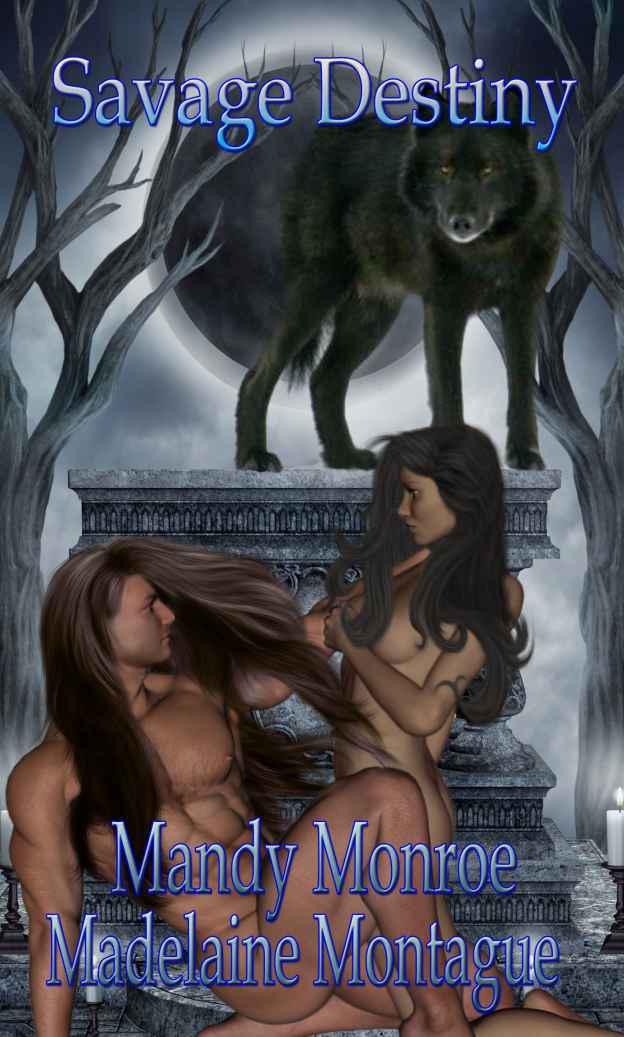 Nevaeh sighed dismally as she continued to look through the skimpy outfits on the rack in front of her.

Her friend Nadia had been badgering her to come to this club, Fantasies Fulfilled, for weeks now.

For the most part she’d come just to shut her friend up, but, if she was honest with herself, she’d had other reasons for coming.

She needed some escapism, and, according to her friend, this was just where to find it.

Now that she’d forked over more money than she cared to think about, she would like to think that she was embarking on a pleasant adventure, but, it just wasn’t starting out like that.

She was disappointed with the clothing that the club offered.

It was very ‘one size fits most and doesn’t really look good on anyone’ type of stuff.

It would’ve been nice if they’d had something that would compliment her unforgiving curves, but, they didn’t.

She finally decided on an off-white peasant top and barely there see-through brown tattered skirt.

She was glad she’d worn her bustier to the club.

She would put it on over the peasant top to make it look better since not wearing a bra didn’t bear thinking about.

Tying the skirt up a little, she’d be able to show off a little bit of leg and it would make the whole outfit look a lot better.

Having finalized her selection, she examined the room key she’d been given.

It didn’t take her long to locate the room.

Once inside, she headed to the bathroom to change clothes and make the best of what she had.

As soon as she was done, she made her way back to the bedroom.

She was surprised to see a member of the staff waiting for her, his body turned away from her, his gaze on the ceiling.

When he’d determined with his peripheral vision that she was dressed, he turned to address her.

“If you’ll just hop on the bed, I’ll get you ready for your fantasy.”

Nevaeh felt a little unsure about the rope and other things he was holding.

In fact her stomach did a strange little freefall and then knotted up with uneasiness.

Abruptly, a bondage fantasy seemed a little wilder than she actually wanted.

“What’s that black thing with the rubber ball on it?” she asked suspiciously.

He looked a little surprised by her question. “It’s a gag.

If you’re worried about germs, don’t be.

We thoroughly sanitize everything after every use, and, as you well know, we carefully screen our customers for diseases, so you don’t have to worry about anything like that.”

She’d actually felt a lot better before he brought any of that up.

“Look, Darekk, thank you so much, but I don’t really want all that kinky weird shit.

The rope is a lot more than I’m used to.

I’m not going to let you put something in my mouth so I can’t scream for help.”

Everything is entirely optional.

We just want you to be able to make the most out of your experience here with us.”

Slightly mollified but still more uneasy than revving with anticipation, Nevaeh got on the bed.

“In the middle is just fine,” he said, coming up beside her.

He grabbed her hands and positioned them behind her back before tying her up with the rope.

She’d never been tied up before.

It hadn’t seemed like such a bad idea when she’d been discussing her fantasy package in a nice office with her friend close by for support, but now . . . now that she was going to be alone with . . . whoever, she wasn’t so sure.

Of course, the guy tying her up could have cared less.

He seemed completely indifferent about the whole thing.

He must have seen a lot in his time at the club.

But, her, however, she couldn’t manage to be so at ease.

She was the one made vulnerable.

It was something she wasn’t used to.

Her pussy went as bone dry as her mouth.

Trying to ignore it, she reminded herself that that was the whole point in coming, trying new things in a safe environment.

Taking a deep breath, she tried to relax.

The employee, having finished with his handiwork, moved back.

“Your fantasy will begin shortly.

Please do not hesitate to contact me or another employee if you are at all dissatisfied with your experience.

Just say the word CONTACT at any time to end your session,” he said just before walking out the door.

She was very glad they’d thought of it.

She discovered she didn’t want to analyze why they had provided a safe word although all sorts of unnerving thoughts flickered through her mind.

It would make her more nervous than she already was.

Her stomach muscles were complaining from her rigid sitting position in the bed.

She had no idea how long she’d have to wait until someone came, so she decided to lay back on the pillows.

A little too close to the end of the bed to reach the pillows with her head, she wriggled onto her side and tried to scoot up the bed on her side.

She discovered, with her arms behind her, that she was off balance.

She fell over the side of the bed, felt a moment of blind panic as she felt herself falling and then pain exploded in her temple as she struck the bedside table.

Nevaeh woke some time later, her vision a little blurry, like she’d slept too long.

The side of her head hurt and her face felt like she’d slept on a cat’s scratching pad.

When things came more into focus, she realized that she was looking directly at molding on the wall, but it wasn’t molding near the ceiling, it was floor molding.

How had she managed to fall asleep on the floor, she wondered a little blankly?

As she tried to move, her body protested.

Her arms were behind her back and they felt as if they were still asleep.

Then, everything came rushing back to her.

She was still at the club!

She’d been tied up on the bed and had been trying to rearrange herself when she’d fallen off.

Moving her head to try to look around, she bumped the top of her head into the bedside table.

It took an effort to maneuver herself into a sitting position but finally, with a great deal of effort and a lot of grunting, she managed it and examined the piece of furniture.

She must’ve hit it when she’d fallen off of the bed, she decided, a little surprised, and disappointed if it came to that, that she didn’t see blood and hair stuck to the damned thing.

Her head was hurting enough there really ought to be more sign of the damned damage, particularly when she realized she must have knocked herself out!

That would certainly explain why the side of her head was throbbing like a son-of-a-bitch.

She couldn’t have been out very long, though.

The sound of the door opening behind her and then closing drew her attention.

The muscles in her neck and back screamed in protest at the sudden movement as she whipped her head around instinctively.

“Trying to escape were you?”

Nevaeh felt her jaw sag as she stared at the man standing near the door, his legs spread in a wide-legged stance, his arms down at his sides.

It was the whip that really caught her attention, though.

It looked way too damned realistic to her mind.

Disbelief fluttered through her mind as the man advanced on her.

Somehow, despite the fact that the man himself looked about as far from anybody’s idea of a dream fantasy as a balding, paunchy man possibly could, she couldn’t quite convince herself that this had to be part of it.

He was just a really good actor.

The ferocious glare and the glittering eyes filled with malice were all for show.

His hand felt like a vice when he grabbed her arm.

The power of his grip startled her almost as much as the fact that he managed to lever her fat ass off the floor with relatively little effort.

She landed on the bed face down, her ass in the air as she struggled to get her feet under her and enough leverage to straighten up.

She heard the crack of the whip about two seconds before it made impact with her ass.

The damned skirt might just as well have been non-existent.

Fire snaked across her ass and the coppery taste of blood filled her mouth.

She reared back and screamed bloody murder at the top of her lungs as the pain connected in her mind.

She hadn’t managed to drag in a breath when the whip cut across her ass again.

The second scream was accompanied by the only words that entered her beleaguered mind—every foul word she’d ever heard in her life.

The whip cracked across her upper thighs.

She screamed again, searching her mind frantically for the control word as it popped into her mind that that might be the only way to stop the lunatic making mincemeat out of her ass.

I swear to god when I get lose, I’m going to shove that god damned whip so far up your ass you’re going to be fucking gargling on it!” she snarled.

She knew it was!

He hit her again.

“You’ll learn to watch your tongue!” he growled.

I’m not fucking enjoying this!

I’ll have you fired, you bastard!”

The door slammed open, hitting the wall so hard it sounded like thunder in the room.

“Thank god!” Nevaeh wailed tearfully, jerking her head toward the sound of rescue.

The thing that met her gaze threw her into a complete state of shock, however.

She blinked, certain her eyes were just too blurry with tears to make out recognizable features, but the man-like thing looked even
less
man-like when her vision cleared.

The maniac trying to strip the hide off her ass seemed a little perturbed, too.

He screamed as the man-beast bounded from the door and to him in one lunge.

Nevaeh felt her eyes bulging as she twisted her head sharply to see if the ‘thing’ was as dangerous as it looked.

She managed to catch sight of the two as the beast grabbed the man, lifted him clean off his feet and pitched him toward the door that was now hanging by one hinge.

Shock paralyzed her as she watched her tormentor fly out the door, smash into the wall on the other side of the hall and then hit the floor.

The beast man bounded after him.

“Fantasy!” Nevaeh managed to get out in a hoarse whisper, her mind grappling with the fantasy she’d paid for—which bore no fucking resemblance to what had happened and was happening that she could recall—trying to assimilate how the hell they’d managed to make it look like the beast man had picked up a man that looked like he easily weighed two hundred fifty plus pounds and
thrown
him across the room, and the realism of the make-up the beast man was wearing.

Unexpected Love (Timid Souls Book 3) by Melanie Munton
Fenway 1912 by Glenn Stout
The Boy Who Plaited Manes by Nancy Springer
Fifth Vision of Destiny - Brett by Kallysten
Return of the Rogue by Donna Fletcher
Super Schnoz and the Invasion of the Snore Snatchers by Gary Urey
One Night With You by Shiloh Walker
The Merry Month of May by Joan Smith
The Sugar Barons by Matthew Parker
Forgiven by Brooke, Rebecca
Our partner