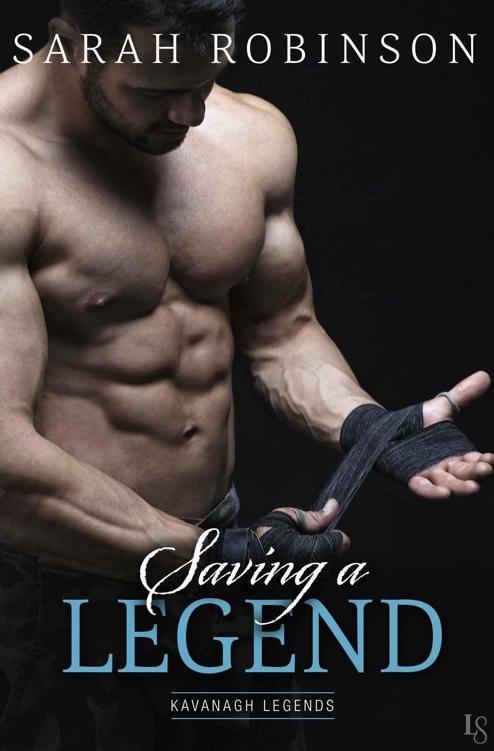 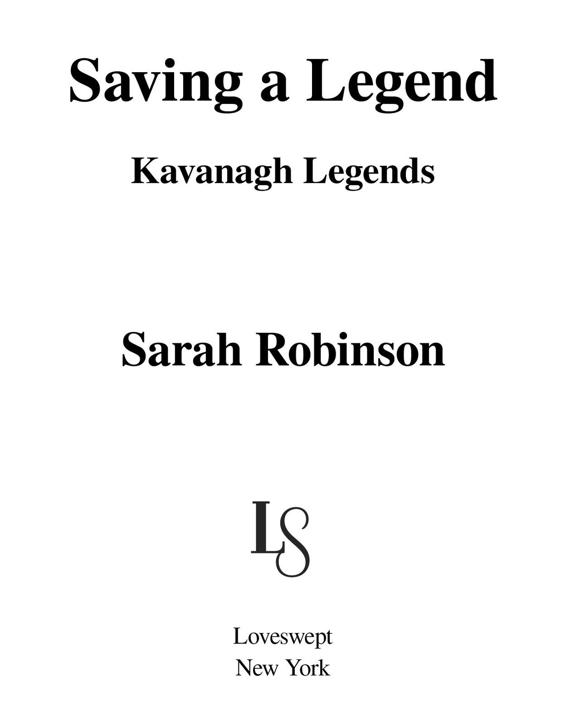 Saving a Legend
is a work of fiction. Names, places, and incidents either are products of the author’s imagination or are used fictitiously. Any resemblance to actual events, locales, or persons, living or dead, is entirely coincidental.

LOVESWEPT is a registered trademark and the LOVESWEPT colophon is a trademark of Penguin Random House LLC.

This book contains an excerpt from the forthcoming book
Becoming a Legend
by Sarah Robinson. This excerpt has been set for this edition only and may not reflect the final content of the forthcoming edition.

Excerpt from
Becoming a Legend

Saving a Legend
has many stories built into one, and one of those deals with a very sweet child named Shea (pronounced
Shay
), who has autism spectrum disorder.

Autism, now autism spectrum disorder, has changed a lot in the last few years in the way it’s defined, the terminology used, and the symptoms considered, thanks to the latest
Diagnostic and Statistic Manual of Mental Disorders,
5th edition. It’s also likely that it could change more in the future.

This novel does its best to represent an accurate experience and was proofread by a child psychologist. Four mothers who have children with autism spectrum disorder, including the
New York Times
bestselling author Penelope Ward, read
Saving a Legend
and helped with any edits needed to create the most accurate depiction possible. Please note that the author takes this topic very seriously and hopes to bring more awareness to the disorder.

Thank you for taking the time to open your heart to Shea! For more information on autism spectrum disorder, please visit Autism Speaks at
www.autismspeaks.org
.

“Did you call the cops?”

“What the hell did you do, Kavanagh?”

Kieran Kavanagh’s sneakers hit the cement hard as he pushed off and sprinted toward the edge of the empty swimming pool. Glancing down at his hands, he realized they were covered in blood, and it wasn’t his. He pulled the wrap tape off them and threw it to the side as he ran, hoping to rid himself of the evidence.

Gripping the top edge of the pool wall, he hoisted himself up to the ground, his biceps straining with the swift movement, only to come to a dead stop when confronted by three uniformed police officers, their weapons drawn.

Kieran’s eyes went wide, his breathing ragged, his hands slowly rising in the air. Nearly everyone who’d been watching and betting on the illegal fight had cleared out. The few stragglers who weren’t fast enough were being cuffed and read their rights.

“Hands behind your back.” The officers pulled his arms down behind him, cuffing his wrists and holding his forearms with an iron grip.

Looking over his shoulder, Kieran saw the bloodied mess of his opponent lying motionless on the empty pool floor. Police were already climbing down to help him when he spotted Rory, his older brother, in the mix. Rory’s eyes found Kieran, and the look of shock and disappointment was enough to gut him.

“Kavanagh! Up! Let’s go, you’re being processed out,” a burly guard announced from the hallway outside his cell.

“About fucking time.” Kieran jumped down from the top bunk he’d been stretched out on. It had been his home for two years, and yet each night he’d had to come up with a new way to fold himself onto the tiny metal platform with a sorry excuse for a mattress pad. Either his feet hung off the end—the steel edge digging into his calf—or one of his arms fell to the side, or his head was crunched up against the dingy gray wall.

“Hands through the slot,” the guard instructed, pulling out a pair of cuffs.

Kieran pushed both hands through a small opening in the bars and waited as the guard slapped the cuffs over his wrists. Once secured, Kieran stepped back from the bars and the guard called his cell number into his radio. A buzzer sounded and the bars slowly slid open, grunting and complaining the entire way.

“Let’s go.” The guard motioned for Kieran to move, which he did. He wanted to get out of here just as much as this guard didn’t want to have to deal with him anymore.

At this point, he was double the size of most of the guards, and even most of the inmates. He’d spent his prison sentence working out because, frankly, there was nothing else to do. He needed to keep busy, stay active, in order not to let his mind dwell on the fact that he was wasting his youth behind bars.

“Is anyone here to pick me up?” Kieran asked the guard as they walked through the prison.

“Um.” Kieran paused, considering saying something snappy that would no doubt earn him a nightstick between the shoulder blades.

“Shut the fuck up, Kavanagh.” The guard unlocked two doors in a row, escorting him into the processing area of the prison. “Go get your clothes from over there.”

Kieran glanced in the direction he was pointing to see another guard sitting at a desk behind a glass pane. Once uncuffed, Kieran headed toward her and pulled his inmate badge off, pushing it through the slot.

“Kavanagh. All right, here’s your stuff. Go get changed and bring your coveralls back when you’re done.” She pushed a clear plastic bag through the slot, and he recognized his jeans and shirt.

Kieran sifted through the bag of clothing in his hands. “That’s everything I had on me?”

The first guard scoffed from behind him. “You weren’t exactly draped in gold and diamonds when you got arrested, Kavanagh.”

Kieran ignore the jab and headed into a small room off to the side of the processing area. He hurried to yank the dull gray jumpsuit down his body, pushing it to the ground and stepping out.

He slid on his old jeans, feeling they were a bit tight around his thighs. Every muscle on his body had tripled in size, even his legs. Pulling on his old T-shirt, he wasn’t the least bit surprised when it barely made it down his midsection, stretching tightly over his defined pecs and chiseled abs.

Thankfully, his sweatshirt fit better since he’d always worn them a bit baggy anyway. With the warmth of spring he knew the extra layer would be somewhat uncomfortable, but at least the sweatshirt covered his stomach. He was already loving the feeling of the familiar old fabric against his skin, rather than stiff, scratchy prison garb.

He pulled his wallet out of the bag and flipped it open.

He felt older, as if centuries had passed while he was staring out of barred windows. It had been a while since he’d seen his name in print, reminding him that only his family called him by his first name. He’d gotten so used to going by only his last name in here. He shoved his wallet into his pocket, then headed back to the front desk and handed his coveralls through the slot.

“You set?” asked the guard who was escorting him.

“Been ready to get out of this hellhole for two years.”

Keeping a firm hand on Kieran’s upper arm, the officer led him down another hallway and through two more locked doors before pointing him to his final exit. It was a plain set of solid double doors, with slivers of sunshine sneaking through the cracks around all four edges.

Kieran’s hand paused on the prison door handle for only a moment before pushing down and out. Swallowing his nerves, he stepped into the sun and immediately shielded his eyes from the light. Until now, he had been allowed only one short visit per day to the prison yard, which was a small section of land mostly shaded by the building itself. Now, feeling the wind gently brushing over his skin, not obscured by high walls, his chest ached for all he’d missed.

Acutely alert to all the sounds and smells he’d been missing these last two years, he walked down a concrete path leading toward the twenty-foot-high metal fencing that surrounded the prison. Birds chirping, the roar of diesel engines, and the smells of exhaust mixing with spring air hit him. All once so familiar, they now overloaded his senses.

Guards in towers watched him make his exit along the concrete path. As he tried to acclimate to the bright sun and the feeling of being free, he decided that this was it. Taking stock of everything around him one final time, he promised himself he would never set foot here again. He was determined, he was going to follow the rules, and he would make damn sure this part of his life was over for good.

Snapping out of his thoughts, he saw a tiny older woman jumping up and down, waving at him, her dark red hair a halo around her expressive face. He’d know that vibrant hair and bright grin anywhere—his mother, Deidre “Dee” Kavanagh.

Speeding up his stride, he arrived at the gate on the edge of the prison property just as it buzzed and opened for him. Seeing his mother with a big smile on her face was everything he’d hoped for, and he spread his arms wide for her. She had visited him every other weekend in the federal prison and had kept him up-to-date on life back home, but they’d never been allowed more than one quick, supervised hug goodbye each time. “Good to see you, too, Ma.”

“I’ve missed you so much, Kieran. A boy shouldn’t be away from his mama this long.” She sniffed, let go, and then stepped back.

He smiled at her and affectionately cupped her face, wiping away the tears. She looked older than he remembered and definitely more stressed. Wrinkles lined her forehead, and the corners of her eyes were lined with creases he’d never seen before.