Read Screams in the Dark Online

Screams in the Dark 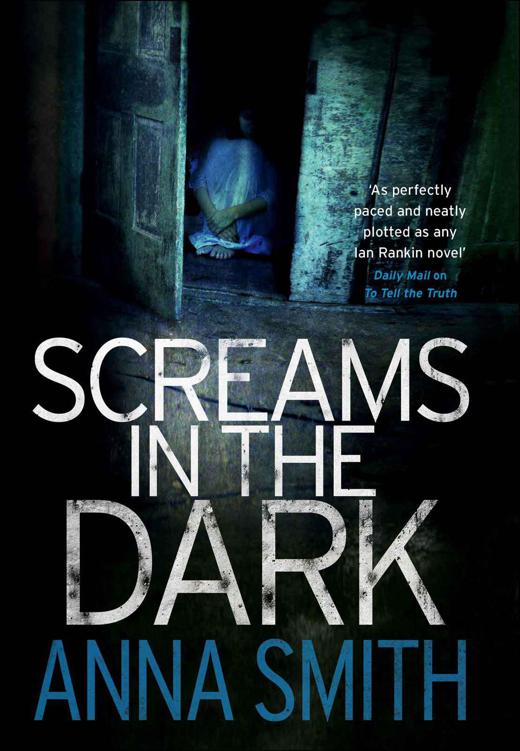 First published in Great Britain in 2013 by

The moral right of Anna Smith to be identified as the author of this work has been asserted in accordance with the Copyright, Designs and Patents Act, 1988.

This book is a work of fiction. Names, characters, businesses, organisations, places and events are either the product of the authors’ imagination or are used fictitiously. Any resemblance to actual persons, living or dead, events or locales is entirely coincidental.

The Dead Won’t Sleep
To Tell the Truth

‘Give me your tired, your poor, your huddled masses yearning to breathe free …’

The alarm didn’t beep when Tanya pushed open the door and entered the building. She stood for a moment in the tiled hallway, waiting, ready to punch in the code. Nothing. She made her way up the staircase, muttering under her breath about how careless the rich were. So careless they could leave office doors open all night for burglars. At the top of the landing, she caught her reflection in the mirror. She touched her swollen cheek and winced at the pain. Bastard. The drunken beatings were worse now that Josef had been jobless for months and spent his days boozing in the flat, while she worked at cleaning offices till she came home at night dropping with exhaustion. Fuck him. One morning, she’ll walk out and never come back, she promised herself.

The stench hit her first as she opened the door of her boss’s office – and then she saw him. Tony Murphy was hanging from the ceiling, his chair beneath him lying on its side. Her hand went to her mouth and she steadied
herself against the wall as she felt her legs buckle. She closed her eyes, but the grotesque image was still there: the face blue, one eye bulging like a gargoyle, the other slyly half open, the swollen tongue poking through blue lips and hanging to the side. Tanya gagged, feeling the sick rise in her throat.

The closed venetian blinds clanked and fluttered at the open window. She turned to look again at Tony’s distorted face, shaking her head in disbelief. Then tears stung her eyes. Yesterday in the hotel room where they had their secret trysts, he’d told her again how much he loved her. Again, he promised he would leave his wife and they’d be together. Liar. She closed her eyes and pictured him turning her over in the bed in the throes of passion so he could come in his favourite position, and remembered how, afterwards, they’d lain there, spent and in each other’s arms.

‘Why, Tony?’ she sobbed into her hands. ‘Why?’ She slid down the wall and sank to the floor. Tony had made her believe that life was full of so many possibilities if you loved enough. Now the dream had turned into a garish, terrifying nightmare, and the reality was there
was
no escape from the life she had.

Eventually Tanya glanced up at the clock on the wall. It was nearly 9.30. She had to compose herself, pull herself together. She got to her feet and stood sniffing, wiping her face with the back of her hands. She took a step towards the desk, where she squinted at two envelopes addressed in Tony’s handwriting – one to Millie, his wife, the other to Frank, his partner in the law firm. She picked
them up and shoved them under her vest, then tucked it into her trousers. She looked up at Tony’s body, and the tears came again.

Tanya was backing out of the office when she heard the front door open. She staggered to the top of the stairs and started screaming as Frank Paton, startled, ran up the stairs towards her. She couldn’t speak, but just pointed in the direction of the room.

‘Oh Christ! Oh Christ no, Tony! Call an ambulance, Tanya. Hurry.’ He covered his mouth and nose with his hand.

‘He’s dead, Mr Frank. You can see he’s dead,’ she said through sobs.

Paton looked at her, then up at Tony’s body, twisting at the end of the rope. He took out his own mobile and dialled 999.

‘This is Frank Paton, of Paton, Murphy Solicitors, in Renfield Street.’ He took a breath. ‘My partner Tony Murphy has hanged himself … What? … Here, in his office … I just came in, the cleaner found him … He’s hanging from the ceiling. He’s dead.’

He turned to Tanya, his eyes full of tears. ‘They’re on their way.’ He swallowed.

‘No note. Can’t believe it. Nothing. Not even for Millie.’ Paton closed his eyes, and pinched the bridge of his nose
with his thumb and forefinger. ‘Oh, Millie. What am I going to say to you?’ He whispered to himself.

He stood for a moment, looking around the room, then bent down and went into the open safe in the corner. He took out three more bulging files and left the room.

At around the same time, across the city, Ben Gates steered his boat up the River Clyde, where a crowd had already gathered on the walkway despite the steady drizzle. People always stopped for a look when a body was found in the water. Morbid curiosity. Ben had seen it all before. He waved at the uniformed cops standing on the embankment, but he didn’t need them to direct him. He could see it already, bobbing in the current. He carefully eased his boat closer to the body, but his trained eye knew straight away. He took out his mobile and called the Strathclyde cop who had phoned him twenty minutes earlier at the Glasgow Humane Society to say they needed his help.

‘What? You winding me up, Benny? I’m trying to eat a fried egg roll here.’

‘No legs or anything?’

‘Christ sake, man. Do you not know what a torso is? You’d better get rid of the ghouls up there before I bring it in.’ He hung up.

Ben pulled his boat around so it shielded the torso from the gaping crowd. Whoever belonged to the remains in front of him had been a living, breathing person at
one time – recently in fact, judging by the looks of things, the colour of the raw flesh where the arms and legs had been severed. He picked up the oilskin and expertly cast it across so the body was covered and snared, enabling him to drag it towards him. When it was close enough he gripped the ropes and dragged it onto the boat, easing it over the side and gently laying it on the bottom as though he was handling a precious child. He didn’t touch it, or lift the cover back. His father had always taught him that curiosity wasn’t his job. His role was to preserve the dignity of the poor soul they’d recovered, and take it towards its final journey. He slowly made his way to the embankment, where he could see the cops already pushing everyone back.

Ben tossed the rope to the young cop standing at the edge, trying to keep his feet on the slippery, muddy bank, and turned off his engine as the two cops hauled the boat up the slope inch by inch. The ambulance men made their way down with a stretcher. Ben could hear the big Strathclyde Police sergeant on his radio telling them to send transport. The boat, with the torso still in it, would be taken in a low loader to the mortuary so that everything would be kept intact for the post-mortem. Not that there was much left to examine.

‘Fuck me!’ the sergeant said as the two officers pulled back the cover. He bent down, peering at the chest.

‘What the fuck’s that? Is it tattoos?’

‘Well, what is it?’ the sergeant screwed up his eyes.

‘Stitches,’ the paramedic said. ‘Looks like they’ve been
done by a blind person wearing boxing gloves. But it’s stitches. Rough-looking job all right.’

‘Aye.’ The paramedic turned to his partner, then to the sergeant. ‘Somebody’s opened this guy up. Something well dodgy here. We’d better not touch it till the CID come.’

One man held the key to these two grisly scenes, but he was nowhere near them. Tam Logan was so cold he couldn’t keep his eyes open. The blood on his temple where they’d hit him with the butt of the gun had congealed hard. He tried to focus on his wristwatch but it was a blur. He guessed he’d been in the back of the refrigerated van for nearly two hours.

Suddenly there was the sound of bolts being slid and someone pulled the door back. Tam tried to sit up, but his hands were tied and he slumped against the side. He heard voices outside, and shook himself, trying again to get up and this time managing to make it to his feet. Two men wearing balaclavas climbed into the back of the van and stood over him. His stomach lurched when he saw their guns. They stood in silence as another man climbed in and looked down at him. He wasn’t wearing a balaclava, and Tam recognised him as the man they called Doctor Mengele – though never to his face. He’d seen him before at the plant, dressed in his white coat, and he knew he was a foreigner. They’d said he was from Bosnia and he was the boss, but nobody knew his name.

‘What were you doing?’ The Doc eyed him coldly.

Tam said nothing. He tried to swallow but his mouth was dry.

‘Why did you steal it? Did you think we would never find you?’

Tam shook his head. ‘I don’t know. I’m sorry.’ He could feel his knees shaking.

The Doc stared at him again, then took a deep breath and gave a bored sigh. He looked at one of the masked men.

‘Kill him.’ He turned and walked away.

Rosie parked her car and walked towards the noise. It was supposed to be a protest, but it looked more like an unruly mob.

‘What do we want?’ bellowed the fat woman standing on the low wall.

‘Equal rights,’ the crowd chanted back.

‘When do we want them?’ She was whipping them up.

Equal to what, Rosie wondered, as her footsteps scrunched on the broken glass from bottles tossed by the obligatory thugs who would turn up anywhere looking for a fight.

She stopped for a moment and gazed up at the notorious Red Road flats, a bleak cluster of eight massive tower blocks scarring the skyline. It must have seemed like a good idea at the time to house families in slabconcrete blocks thirty-one storeys high. But then it
was
the sixties, so you had to assume that whoever sanctioned it was off their tits on drugs. Because in a few
short years high living, as the flats were dubbed, had become low-life dens, with junkies and drug dealers on every floor. And at least twice a year some poor bastard took a swan dive from the twentieth floor, either because they’d been shoved or had simply run out of hope.