Read SEAL Of My Heart Online

SEAL Of My Heart 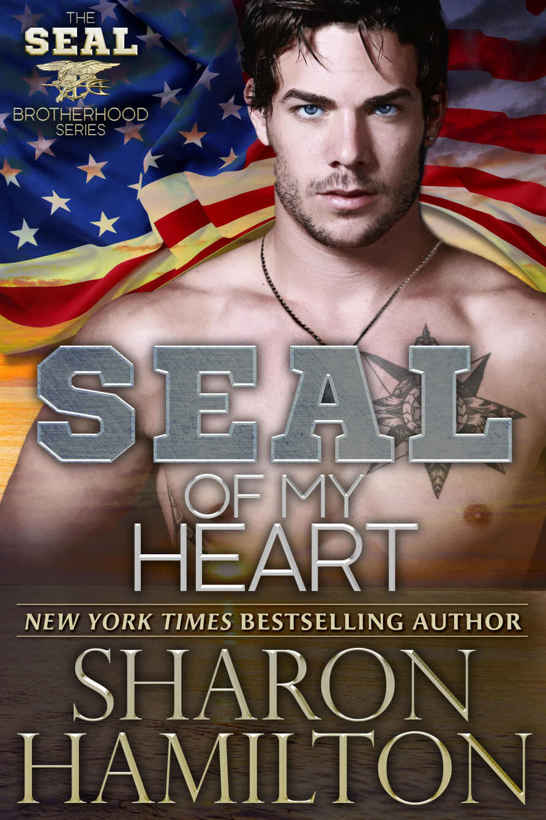 SEAL Of My Heart

I always dedicate my SEAL Brotherhood books to the brave men and women who defend our shores and keep us safe. Without their sacrifice, and that of their families—because a warrior’s fight always includes his or her family—I wouldn’t have the freedom and opportunity to make a living writing these stories. They sometimes pay the ultimate price so we can debate, argue, go have coffee with friends, raise our children and see them have children of their own.

One of my favorite homages to warriors resides on many memorials, including one I saw honoring the fallen of WWII on an island in the Pacific:

“When you go home

Tell them of us, and say

We gave our today.”

These are my stories created out of my own imagination. Anything that is inaccurately portrayed is either my mistake, or done intentionally to disguise something I might have overheard over a beer or in the corner of one of the hangouts along the Coronado Strand.

Wounded Warriors is the one charity I give to on a regular basis. I encourage you to get involved and tell them thank you:

All rights reserved. Without limiting the rights under copyright reserved above, no part of this publication may be reproduced, stored in or introduced into a retrieval system, or transmitted, in any form, or by any means (electronic, mechanical, photocopying, recording, or otherwise) without the prior written permission of the copyright owner of this book.

This is a work of fiction. Names, characters, places, brands, media, and incidents are either the product of the author’s imagination or are used fictitiously. In many cases, liberties and intentional inaccuracies have been taken with rank, description of duties, locations and aspects of the SEAL community.

Trailer for SEAL Of My Heart

Other Books by Sharon Hamilton

Click here for the video trailer for SEAL Of My Heart.

A
irports were mostly
happy places for Kate. She pretended she was going on an exotic vacation, a tour of lands where everything from the smells to the language and customs of the people was foreign. In her fantasy, she’d meet a gorgeous, mysterious man and they’d spend a romantic week together exploring, indulging in glamorous restaurants and glittering casinos and sensual delights.

And even though she was engaged to be married to the most eligible bachelor in Sonoma County, the favorite son of the favorite first family of wine, she couldn’t help it. The fantasy lurked just around the corner in her psyche, waiting to wrap her in a sensual blanket and whisk her away from the reality of her humdrum future.

It worried her some that she wasn’t happier about her upcoming wedding or that she was even considering escape. Why didn’t she feel more like a blushing bride-to-be? Something seemed…wrong, uncomfortable, but she forced herself not to think about it, writing the whole thing off as stress-related panic over the big day.

Her airport fantasy persisted though, and was kicking in big time this afternoon. She felt like having an adventure, something far away from everyone she knew, perhaps something far different from what she’d ever imagined for herself and her life. And as she examined the crowded terminal in San Francisco, she couldn’t quell her quickening excitement while she boarded the plane, even though Portland was not even close to being an exotic land, and her sister was a poor substitute for a dark, handsome man who would sweep her off her feet.

It was going to be a fairly full flight, and she wasn’t lucky enough to have an early boarding ticket. She preferred to sit by a window, but figured it was unlikely. Scanning down the rows ahead of the slowly shuffling line of passengers, she only saw one open window spot on the left, with someone occupying the middle one. When she came upon it, a briefcase lay on the cushion at the aisle. The young man in the middle seat was fully occupied in reading a book.

He looked up as if he’d heard her silent plea for the window position. His warm blue eyes lit on her face casually. She knew he wanted to scan her figure but stopped himself, and then he smiled.

What was it about handsome men who smiled easily? Did the smile mean he would like permission to engage? Did it mean he liked what he saw? Did it mean he was hiding something? He didn’t look like the type to feel awkward, certainly not as awkward as she felt.

Her eyes darted to the open position next to him, and his glance followed hers.

“You want the window?” he asked.

She didn’t say anything, stuck in place as if her feet were encased in concrete. A passenger from behind pushed into her back, reminding her she was holding up a line of travelers yet to be seated.

“It’s yours if you want it,” he whispered in a bedroom voice.

These sorts of attractions to strange men weren’t supposed to happen to a happily engaged young woman whose life was planned out nearly moment-by-moment. In spite of her fantasy life, which was
not
planned out and definitely
not
scripted, she decided to allow herself to get dangerously close to this stranger.

He was dangerous because he was perfect in enough ways to upset her ordered life. And he matched her fantasy man to a T.

“Thank you. That’s very kind of you,” she said.

Kate saw he was not only good-looking, he also revealed himself as tall, very fit, and muscular as he eased gingerly across the aisle seat and slowly uncoiled the muscle and sinews in his upper torso. And, boy, did she react…enough for him to hear her heartbeat probably, or see the slight involuntary shaking of her knees or the quiver of her lower lip. She caught his scent with a hint of lemon from an aftershave applied earlier in the day. She loved lemon on a man.

She actually heard a low growl of approval, and that made her traitorous panties go wet. It was all the right and oh-so-wrong kind of chemistry in front of impatient strangers. Over two hundred of them.

And she didn’t care.

Kate turned a shoulder, crouching to sidle in front of him, her butt grazing the tent in his pants with interesting discoveries. She didn’t dare say she was sorry. Just best to pretend it never happened. She settled at the window, placing her Kindle and her slim briefcase on the seat next to her and stashing her purse on the floor. Then she watched out of the corner of her eye as he settled himself back into place and then connected his seatbelt with long, strong fingers.

She became extremely interested in the loading of bags into the cargo hold, the position of the little vehicles servicing the plane, the weather, other planes taking off in the distance, all the while willing her breathing and her heartbeat to return to normal. When she thought sufficient time had passed, she let her eyes drop to her lap, and then she shot a furtive look at the stranger at her side without turning her head.

He was reading his book again, not paying the least bit of attention to her. She told herself it shouldn’t matter what kind of book it was, but she was
dying
to know in spite of herself.

She could tell he knew she was watching him, because his eyes scanned the pages, and his lips stayed pressed together but began to quirk up in a smile. The laugh lines at the corners of his eyes were deliciously short. His shiny, dark hair was slightly curly, a little longer than it should be, which made her think maybe he was an older college student. A retread.

She faced forward while the cabin doors closed. Then she sighed, and it did seem to let out some of the tension.

He brought out a small set of expensive ear buds and plugged them in, adjusting the pieces into his ears before resuming his reading.

Kate closed her eyes and told the fantasy in her head to chill, explaining to herself and the cast of fantasy characters who wanted argue about it that she wasn’t in any danger of doing anything inappropriate and that today’s trip was going along a normal, well-worn path. She told them it was going to be a boring day.

Until he tapped her on the shoulder. He was smiling again and holding his book out to her.

“You read romance?” he asked.

“Y-yes.” How hard was it to admit the truth?

“Well, I’ve just finished my sister’s book, and she said to give it away to someone else who might like to read it, so it’s yours if you want it.”

Of their own volition, her fingers snatched the book. Did he notice how quickly she’d made up her mind?

Be With Me.
The title was familiar. She’d read about this particular book on one of the blogs she followed. A time travel romance, by Linda Gray. It was exactly what she needed to get her mind off the handsome stranger to her left.

“Thank you.” She smiled in spite of herself. Trying to play it cool.

She glanced back down at the book, flipped open to the title page and found a signature.

“My sister,” he said, nodding at the page. “In case you were thinking I read romance as a regular thing.”

“I’ve known some men who read romance,” she lied.

“Really?” His eyebrows scrunched atop his nose. “I’ve never known any.”

“You just said you read this book.”

The Earl's Wager by Rebecca Thomas
Sin entrañas by Maruja Torres
Then We Die by James Craig
Centurion's Honor (Imperial Desires, Book One) by Aidan, Nadia
The Maggie by James Dillon White
Helliconia: Helliconia Spring, Helliconia Summer, Helliconia Winter by Aldiss, Brian
The Duke's Deception by Fenella J Miller
The ETA From You to Me by Zimmerman, L
Bobby: Red, Hot & Blue, Book 6 by Cat Johnson
InvitingTheDevil by Gabriella Bradley
Our partner