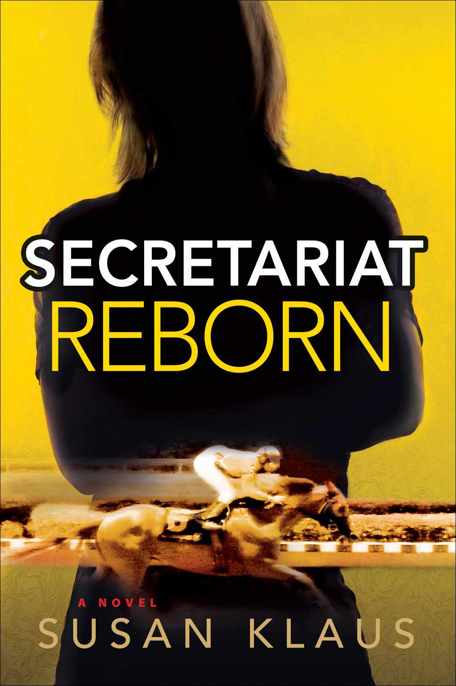 This book is a work of fiction. Names, characters, businesses, organizations, places, and incidents either are the products of the author’s imagination or are used fictitiously. Any resemblance to actual events, businesses, locales, or persons, living or dead, is entirely coincidental.

To my father, Leonard Meyer,
who passed on to me his love of animals and
the optimism to never give up.

To Hold on Chris, my Thoroughbred stallion
who gave his foals his gentleness and tremendous heart.

A big thanks to Henry Colazzo, my Miami horse trainer, whose knowledge and help were invaluable. Christopher and Kari Klaus, my children, and Sharon Burns, my sister, for their support. Bobbie Christmas, my Atlanta editor; Susan Gleason, my agent; Jana Hoefling, my niece and copy editor. Cliff Klaus for legal research. To my friends Janet Albright and Maryann Burchell for their encouragement. To my critique boys: Ray, Pat, and, especially, Bill Carrigan who taught me how to write. To my family for always being there for me.

Secretariat ran a mile and a half in 2:24 4/5, matching the world record time for that distance on any surface. He won the 1973 Triple Crown with ease and still holds the track record for the Kentucky Derby and Belmont Stakes, winning the Belmont by a phenomenal thirty-one lengths. He was included in ESPN’s
Fifty Greatest Athletes of the Century,
the only nonhuman to make the list. It is doubtful that we shall see his like again
.

The young man stuffed the paper bag in the pocket of his jeans, looked up and down the aisle of the deserted barn, and slipped his beanpole frame out of the stall. His jittery hands managed to bolt the latch. He hustled outside into the cool autumn air and fading light. The sun was sinking behind vast blue hills as he crept along the checkerboard of white fencing, flanking a dirt lane that lead to the employee parking lot.

Darkness and a heavy mist had settled over the horse farm when Wendell reached the lot. He took a deep breath and strolled to his banged-up Datsun parked under a light. Once in his car, he placed the small, crumpled bag on the passenger seat and fumbled with his keys.

The glare from a flashlight hit his face. “Oh, shit,” he muttered and raised his hand to shield his eyes.

“What are you doing here?” called the approaching security guard.

Wendell rolled down the window. “I’m one of the grooms. A mare—she went down, looked like she might miscarry, maybe colic. I, ah, I had to keep an eye on her.”

Nodding, Wendell started the engine and pulled away. He drove down the long lane under a canopy of moss-draped oaks and left the farm. Patches of fog obscured the quiet country road and slowed his speed to town. He turned into the parking lot of a closed restaurant
and through the eerie mist, he saw a green Chevy pickup. He pulled up alongside it and climbed out.

“You’re late,” growled the man in the driver’s seat.

“You got it?” asked the man with a low, unsettling voice as he eased out of his truck and flicked a glowing cigarette butt onto the asphalt.

“Yes, sir.” Wendell handed him the bag. “I did exactly as you said.” He shifted from foot to foot and stared up at the tall man, thinking this guy could double for Clint Eastwood in his early spaghetti westerns.

The man rested against the fender and inspected the bag’s contents. “If you’ve fucked me, boy, I’ll be your worst nightmare.”

The man tossed him a rubber band-wrapped wad of grimy twenty dollar bills and climbed back into his truck. The Chevy tail-lights vanished into the haze.

The trainer stood on the lush Bahia grass, several yards from a semi horse van. A cigarette dangled from his lips, and his blue eyes squinted in the hot August sun. Hank Roberts, though middle-aged, still had his rugged good looks and trim frame. He spoke with a soft southern twang, yet had an edgy manner that was short on words and short on patience. But when it came to horses, Hank was as cool and calm as the azure sky. He took a last puff of his Marlboro and crushed it under his boot as he watched Juan, his young groom, lead a two-year-old Thoroughbred to the loading ramp.

The sleek bay filly snorted nervously at the monstrous van and flung her black mane. At the loading ramp, she put on the brakes and planted her spindly legs on the grass. Her wide, shifting eyes betrayed her terror as she twitched her ears, listening to the men; one on her right flank, another at her rear, and Juan halfway up the ramp with her lead rope.

“Easy, girl,” said Juan, shaking a bucket of sweet feed to coax her inside the trailer.

“That’s it, Juan. Don’t tug,” said Hank. “She’s ready to jump out of her skin.” He slowly walked to the filly’s left side and stroked her neck. “Good girl,” he whispered. “There’s nothin’ gonna hurt you.” He gazed into her startled eyes and waited until they became serene. More relaxed, she took a bite of food.

Hank ran his hand over her shoulder and down the front leg. “Pick it up, baby,” he said, applying slight pressure to her ankle. The
filly lifted her foot as if for hoof trimming, and Hank gently set it back down on the slanted ramp. She withdrew her hoof at once from the unsettling rubber padding and placed it back on firm ground.

Larry, a stout man with a piggish face and personality to match, had worked for Hank only a few days. He picked up the filly’s front leg and let the hoof plop down hard on the ramp. The filly spooked, rearing and pulling backward.

Juan dropped the bucket and struggled to hold the horse’s lead. “Easy, girl, easy,” he called as the other men leaped clear of her crushing body and flying hooves. Twenty feet from the trailer, the frightened filly settled with all four feet on the ground. Juan petted and calmed her.

Larry shrugged in Hank’s direction. “Ain’t my fault that Thoroughbreds are nuts.”

Hank shook his head and grumbled, “Goddamn idiot.” He called to Juan, “Bring her back around. We’ll try again.”

Juan walked the filly in a wide circle and led her back to the ramp. The men retook their positions.

The van driver, standing at the horse’s rear, added, “Mr. Roberts, I’ve got some tranquilizers in the cab.”

Hank studied the filly. “Naw, she’s already sweaty and excited. Instead of helping, it might turn her into a fearless drunk, a bigger problem. Let’s give her more time.”

A half hour passed with no success. “Time for a new approach,” said Hank. He got a blanket and slowly wrapped it around the filly’s head, covering her eyes. Taking the lead from Juan, he pulled back on the halter and gently pushed against her chest. “Back, sweetie, back.”

No longer able to view the scary trailer, she allowed herself to be guided backward up the ramp, but stopped halfway. “Okay, guys, push,” Hank said, goading the filly back with the lead as the others pressed against her chest. The horse kept stepping back until she
was finally inside. Hank walked her into a stall, attached the crossties, and removed the blanket.

“Good girl,” he said, patting her neck. “Next time won’t be so bad.” He locked the stall gate and stepped down from the trailer ramp. “One more, but this colt shouldn’t take long. He’s on a layoff from the track. Been loaded plenty.”

The One Safe Place by Ramsey Campbell
Doin' Me by Wanda B. Campbell
Nature of the Game by James Grady
Harlequin Superromance February 2014 - Bundle 1 of 2: His Forever Girl\Moonlight in Paris\Wife by Design by Liz Talley
Fast Track by Cheryl Douglas
Outliers by Malcolm Gladwell
To Reign in Hell: A Novel by Steven Brust
Baltic Gambit: A Novel of the Vampire Earth by E.E. Knight
Choke by Stuart Woods
Very Bad Things by Sam Crescent, Jenika Snow
Our partner