Secrets of the Night Special Edition 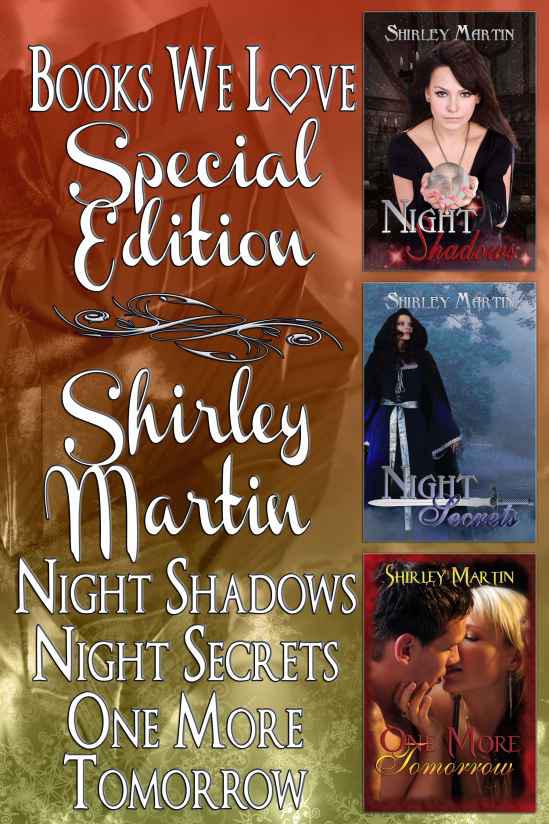 Books We Love is pleased to offer a Shirley Martin Special Edition containing the novels, Night Shadows, Night Secrets and One More Tomorrow. Secrets of the Night is a special edition collectible.

Night Shadows
Fianna leaves home to escape having to marry a man she doesn't love. She travels to another city, far away, hoping to escape detection. There she meets Gaderian, but she doesn't realize he is a vampire. Forced to support herself, she works as a fortune teller in a tavern, and there she meets Gaderian again. She is caught between three different men who want her, each for his own reason. The demon, Stilo, wants her as his sex slave. Angus, the man she refused to marry, won't give up in his search for her. And in a realm where vampires and demons battle for supremacy, she is trapped in a dangerous game, where someone is bound to lose his life.

Night Secrets
Fear and betrayal threaten the kingdom of Avador. Keriam, a princess with supernatural powers, must save her father from assassination. But can she trust Roric, or is he part of the plot?

Roric loved once and lost. He wants to put his past behind him and love Princess Keriam, but he fears she is a witch. And witchcraft is forbidden in the kingdom. If found guilty, she will be burned at the stake. Not even her father could save her.

One More Tomorrow
Destined to live in darkness, Galan must defeat the evil Moloch to regain mortality and win the love of the mortal woman, Stephanie.

"An intriguing tale of two lovers destined to be together." ~ Romantic Times

Tired and footsore, dusty from her long trek along the dirt road, Fianna looked toward the east, where the last of daylight faded from the sky, firing the horizon with a scarlet glow. During the day, she had met a few travelers going in both directions, farmers hauling their produce to market, shepherds herding their flocks, riders cantering along the dirt road, creating clouds of dust. She had left several small villages behind and now trod past the open countryside, the fields rich with corn stalks, lettuce, tomatoes, and strawberries, crops she had feasted on, with no one the wiser.

Her stomach growled, reminding her it had been hours since she'd last eaten. She approached another farm, its tempting scents of strawberries and peaches too great to resist. She looked cautiously around and saw no one. Stopping by a peach tree, she reached up for a piece of the fruit, revelling in its sweet aroma and anticipating its luscious taste.

"What do you think you're doing?" A man emerged from behind another tree, his face set in anger.

Too stunned to say a word, she could only stare, but when he picked up a stone to throw at her, she ran along the dusty road, all but dropping her bag.

Much later, as she trudged along, only isolated farm houses evidenced signs of habitation, no inns to offer rest. Thirst plagued her dry throat. Perspiration soaked her dress and ran down her face. Talmora, it was hot! Facing the prospect she might have to sleep in the open this night, she sank down along the roadside, aware she couldn't go on much longer. Exhaustion dragged her down, every muscle aching. She let out one long sigh and leaned back, her elbows propped on the grass.

Sometimes she wondered if she'd lost her mind, leaving her home in Ros Creda and all that she loved. But she would not marry Angus Kendall, the man her stepfather had chosen for her. First sewing a few of her jewels in the hem of her dress, she had sneaked out of her house in the dead of night, clambering down the ivy that clung to the outside walls, after her stepfather had locked her in her room.  She missed her mother so much, and her horse, Tillie, laid up with a sore foreleg. Now she must earn her way in the capital city of
Moytura
, as a seamstress, if she could find employment. If not, she had a skill only a few friends knew of. She could scry, and she had packed her black mirror, just for that purpose

Since it was summertime, sleeping in the open was not such a bad prospect. But first, a bath. A small lake bordered the southern edge of the nearest farm, clear, fresh water that offered a temptation too tantalizing to resist. A thorough survey of the area convinced her she was alone. She headed down the grassy slope toward the lake, sidestepping rocks, inhaling the sweet fragrance of summer flowers. Leery of any other travelers that might come this way, she hid her canvas bag behind a bush with her belt and dagger beneath it. She unbuttoned her dress, letting it slip to the ground. After retrieving her dress and draping it over the bush, she stepped out of her shoes and kicked them aside. Afraid to take a chance someone might see her, she decided to bathe in her linen shift. Ah, that water looked good. Now–

Shock jolted her, a rapid heartbeat that sent her temples throbbing. A sudden chill raced across her arms and down her legs. She jerked around and faced a middle-aged man–a vagrant by the looks of him–with long greasy hair and dressed in rags. "Stay away from me!" She crossed her arms in front of her and backed away, keeping a wary eye on the tramp. Rape. The word invaded her mind and froze her stomach.

Bloodshot eyes roved her body, a sly leer on his face.

She took another step back, her heart pounding like drums. "You stay away from me!" she repeated. Goose bumps blossomed along her arms, and nausea made her swallow spasmodically.  Her dagger! No use to her now; she could never get it quickly enough and knew she couldn't overpower him.

He chuckled, his breath reeking of alcohol. "Wish I could stay here with you. Me 'n' you could have a good time together. But I promised a fella I'd meet him before sundown," he said, nodding toward the eastern horizon. "We're planning a little . . . um, job, and if I'm late, he'll git someone else." His gaze roved the meadow, his eyes catching her dress draped over the bush. "Say, that's a purty dress ya got there."

"No, Goddess damn you! You leave my dress alone."

"Just one dress, lady. Ya still got yer shift. A purty girl like you shouldn't have no trouble finding a man to buy ya more dresses." He looked around. "And shoes! Yeah, I'll take them, too."

"No!" She grabbed at his arm, her fingernails digging into his skin, but she was no match for his solid strength.  She wanted to kill the bastard.

He jerked the dress from the bush, sharp branches ripping at the fabric, then grabbed her shoes.

"No, damn it!" She bent over and seized a rock. If she aimed right, she could knock him out. Then she'd have to run and hide, but--

"Oh, no, you don't!" First dropping the shoes, he twisted her arm behind her back, forcing her to drop the rock. With one hard shove, he knocked her down and ran off. She fell to the ground with a hard thud, breathing heavily.

"No, oh, no." Slowly, she lifted herself from the ground, knees raised, fingers pressed to her head. She sat unmoving, fighting the tears that threatened to spill. All her jewels, her means of paying her expenses until she obtained a position. And her gold! Cold despair chased every thought from her mind, leaving desolation in its place. How could she have been so stupid, to sew her jewels and gold coins in the hem of her dress? But where else could she have hidden them? At the time, it seemed like a good idea.. Now she had nothing, no means of supporting herself.

Mile markers along the
Royal North Road
indicated she still had five miles to go before she reached Moytura—her destination. Night would soon arrive; one more night to spend in the open, as she had done since leaving her house. Calluses studded the bottom of her feet, cuts and scratches a constant misery. Unable to dismiss the depression that had gripped her ever since her dress and gold were stolen, she realized she had no choice but to continue on, to reach Moytura as soon as possible. It would not take her stepfather long to discover she'd lied. No doubt, he'd sent someone to find her. Or else Angus Kendall had sent someone–or gone himself. She'd slept in woodsy areas along the way, and now her body ached, every muscle from her neck to her feet., especially her bare feet. Hunger tormented her; she needed something more filling than fruit and vegetables she'd filched along the way. She longed for a juicy steak and a warm slice of bread, a glass of wine and a whole apple pie. Her stomach growled, her mouth stone dry with thirst as she ascended another steep hill, grabbing branches for support.

The first faint stars sparkled in an ink black sky, a full moon silvering the ground. From previous trips to Moytura, she remembered a cave nearby, one and her family had explored with torches because of its deep caverns and fascinating interior. It would be cool, too, a welcome relief from the heat, so she'd spend the night there and reach Moytura tomorrow morning. Once in the capital, how in the name of the Goddess could she support herself?  The more she thought about it, the sillier the idea of scrying became. As if she could earn money that way. So, she'd have to find a position as a seamstress, if only she could.

After much searching and retracing her steps, she found the cave about one-half mile to the east.  Her feet hurt, her shift and dress soaked with perspiration. She gingerly entered the cool cave, the sound of dripping water most welcome as she looked ahead to utter darkness. A few steps led to the source of the water, and countless times of filling her hand with water slaked her thirst. So glad to find a place to rest and not worry about discovery, she tried to disregard the metallic odor and taste of the water.

Near the entrance where moonlight pooled inside, she raised her dress over her head, then sank down in her linen shift on the cold limestone floor and stretched out on her back. She changed her position time and again, until she achieved what little comfort was possible, lying on her side, her hands tucked under her head. Her eyes closed, and sleep just breached the edge of her consciousness, when a voice jolted her awake.

"Well, now, it seems I have company."

No! Fianna jerked upright, hands clenched at her sides. Her heart pounded so hard she felt every beat in her ear drums. Goddess! She had been spared ravishment days ago. She feared she wouldn't escape again. Jerking to her feet, she started to run but fell over her satchel and landed flat on the limestone. Her hands stung, the breath knocked out of her, her knees throbbing.  She had to get up, had to escape!