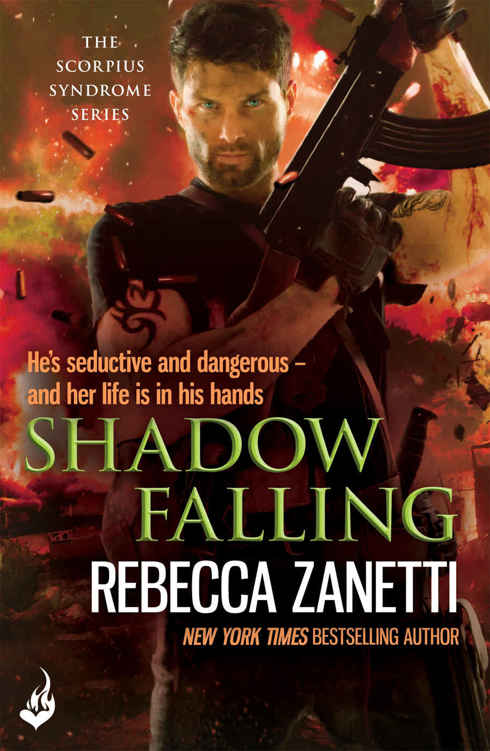 The right of Rebecca Zanetti to be identified as the Author of the Work has been asserted by her in accordance with the Copyright, Designs and Patents Act 1988.

Published by arrangement with Zebra Books,
an imprint of Kensington Publishing Corp.

First published in this Ebook edition in 2016

New York Times
bestselling author Rebecca Zanetti has worked as an art curator, Senate aide, lawyer, college professor, and a hearing examiner – only to culminate it all in stories about Alpha males and the women who claim them. She writes dark paranormals, romantic suspense and sexy contemporary romances.

Growing up amid the glorious backdrops and winter wonderlands of the Pacific Northwest has given Rebecca fantastic scenery and adventures to weave into her stories. She resides in the wild north with her husband, children, and extended family who inspire her every day – or at the very least give her plenty of characters to write about.

Just some of the reasons to fall for Rebecca Zanetti’s powerful romances:

‘Nothing is easy or black or white in Zanetti’s grim new reality, but hope is key, and I hope she writes faster!’ Larissa Ione,
New York Times
bestselling author

‘Rebecca Zanetti had me from the moment I read the description . . . I could barely breath, let alone set down the book . . . you’ll want to add Rebecca Zanetti to your must-read list too!’
The Best Reviews

‘Plenty of action, lots of steamy romance and even a few moments of laughter and tears . . . I was on the edge of my seat until the very last chapter’
KT Book Reviews

Before the Scorpius Syndrome tore through North America and nearly wiped out the population, Vivienne Kennedy was the FBI’s best profiler. The bacteria got her anyway. But she survived. She recovered. And when she woke up from a drug-nightmare of captivity, her skills as a hunter of men had gone from merely brilliant to full-on uncanny. Her mysterious rescuer wants her to put them to the test. But no matter how tempting he is, with his angel’s eyes and devil’s tongue, Vinnie knows she shouldn’t trust him.

For more thrilling passion played out against the dangerous race for survival, look for all the titles in The Scorpius Syndrome series:
Mercury Striking
,
Shadow Falling
and
Justice Ascending
.

This one is dedicated to Caitlin Blasdell, who’s been my agent from the very beginning of this exciting journey.

There aren’t enough words to describe how grateful I am to work with you, or how much I appreciate everything that you do for me.

I have many people to thank for help in getting this book to readers. I sincerely apologize to anyone I’ve forgotten.

Thank you to Big Tone for taking the kids to basketball and football while I wrote this book, for cooking interesting concoctions of noodles and, well, more noodles for dinner, and for being a better hero than I could ever create. Thanks to Gabe for the entertainment and love, and thank you to Karlina for the adventure and love;

Thank you to my talented agents, Caitlin Blasdell and Liza Dawson, who have been with me from the first book and who have supported, guided, and protected me in this wild industry;

A huge thanks to Jillian Stein and Minga Portillo for all the amazing work;

And thanks also to my constant support system: Gail and Jim English, Debbie and Travis Smith, Stephanie and Don West, Brandie and Mike Chapman, Jessica and Jonah Namson, and Kathy and Herb Zanetti.

In his own mind, a sociopath is the sanest person in the room.

The nightmare
clawed through Vinnie, ripping and gnashing until she awoke, her mouth opened in a silent scream.

Thank God. Finally, she’d been quiet. They’d had to move her quarters three times already because her night terrors scared the hell out of normal people. Now she lived in the bottom far corner of a sparsely populated residence in Vanguard territory, which was seven square blocks of relative safety in a dark world.