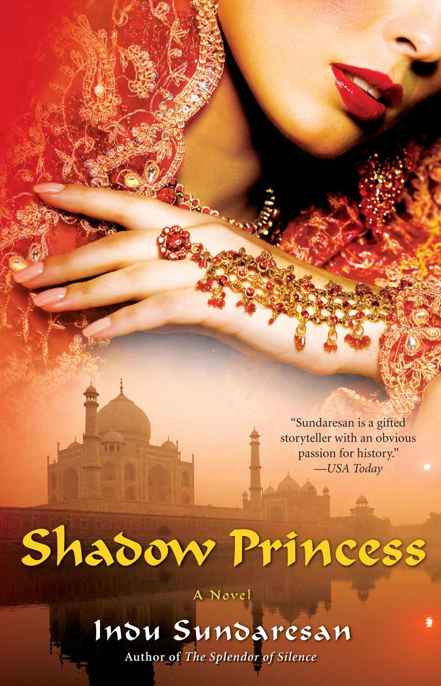 “From a few lines in various historic documents, Sundaresan brings to life two little-known though remarkable women who, though they lived in the shadows of great men, proved that still greater women stood behind them.”

“Sundaresan marshals extensive knowledge of Indian culture and history to tell the story of Roshanara and Jahangir as well as that of the Taj Mahal. A perfect read for those who wish to delve deeply into the cultural struggles of Indian women and the Taj Mahal’s celebrated architecture.”

“Sundaresan has a scholar’s fascination with the period; she’s at her best describing the opulent court or the construction of the Taj Mahal.”

“Sundaresan brings sober devotion to the dynastic tale. . . . A mine of fabulous detail on the daily lives of the Mughal emperors.”

“Heavily researched and expertly written. . . . An exhilarating mixture of character and event, emotion and intrigue, extravagance and architecture.”

“Enthralling. . . . Sundaresan handles very complicated and varied history with a beautiful simplicity. The book never becomes bogged down in details, yet she provides a vivid look at an amazing period in Indian history. . . . I can’t sing her praises highly enough.”

. . . and for Indu Sundaresan’s other remarkable historical novels

“Sundaresan’s debut is a sweeping, carefully researched tale of desire, sexual mores, and political treachery set against the backdrop of sixteenth and seventeenth-century India. . . . Sundaresan charts the chronology of the Mughal Empire, describing life in the royal court in convincing detail and employing authentic period terms throughout.”

“Fascinating. . . .
The Twentieth Wife
offers a rich and intimate view into palace life during the late sixteenth and early seventeenth centuries—and an incisive look at gender roles of that period.”

“A rousing tale of the rise of the most powerful woman in Mughal Empire India—she who set into motion the forces that would, among other things and not at all incidentally, result in the building of the Taj Majal.”

“Indu Sundaresan has written a fascinating novel about a fascinating time, and has brought it alive with characters that are at once human and legendary, that move with grace and panache across the brilliant stage she has reconstructed for them.”

“Informative, convincing, and madly entertaining. The reader comes away with an unexpected vision of the power behind the veil.”

—Marilyn Yalom, author of
A History of the Wife

The Feast of Roses

“The novel’s scope and ambition are impressive.”

“Pepper[ed] beautifully with her rich and well-informed vision of 17th-century Mughal India.”

“Sundaresan weaves a seamless story, integrating solid research about the political affairs of the Mughal kingdom into the fictionalized account of Mehrunissa’s life as empress so skillfully that she brings a sense of easy familiarity to Mughal court life.”

The Splendor of Silence

“Sundaresan unfolds her bittersweet story in flashbacks that are full of sharply drawn details and adroit dialogue. It’s a riveting read.”

“Indu Sundaresan expertly blends together history, memorable characters, and the sights, colors, and smells of India to create a hugely compelling novel. It is, quite literally, a feast for the senses.”

—David Davidar, author of
The Solitude of Emperors

“Indu Sundaresan continues to display her talents as a great novelist of historical fiction. Finely researched and full of evocative details, this sweeping tale of intrigue brings to life a fascinating era with richly drawn characters and a story that is engrossing, deep, and surprising. Sundaresan will certainly please her many enduring fans as well as draw in a wave of new ones.”

For my mother, Madhuram,

After the passing of midnight . . . a daughter was born to that tree of the orchard of good fortune; whereupon her feverish temperature
(mizaj-i-wahhaj)
transgressed the bounds of moderation. . . . This unexpected incident and soul-rending disaster filled the world with bewilderment.

—From the
Padshah Nama
of Abdal-Hamid Lahauri, in
W. E. BEGLEY AND Z. A. DESAI,
Taj Mahal: The Illumined Tomb

T
he Empress’s howl, splintered and exhausted, stretched thinly into the night air and then fractured into little pebbles of sound. One
AM
The coming dawn, still hours away, smudged the horizon in ghostly gray. Oil
diyas
and candles rippled in an impulsive draft of air, spilling light from the apartments fronting the Tapti River.

Mumtaz Mahal screamed again without a sound, lips drawn back over even, white teeth, eyes shut.

“Mama,” Jahanara desperately said, grasping her mother’s hand in her young, strong ones. “Can I give you some more opium?”

Mumtaz shook her head and leaned back on the pillows, shivers racking her body. Now, once the contraction passed—despite the long day and night of suffering—her features settled into an immeasurable beauty. It was there in the perfect cut of her nose, the seamless curve of her chin, the glowing skin and liquid eyes, irises ringed in darkening shades of gray. She had retained the newness of youth, though she was thirty-eight years old this year.

An Android Dog's Tale by David Morrese
Escaping Vegas (The Inheritance Book 1) by Danielle Bourdon
Behind the Night Bazaar by Angela Savage
The Pledge by Laura Ward, Christine Manzari
El misterio de Wraxford Hall by John Harwood
The Rules by Nancy Holder
A Nest of Vipers by Catherine Johnson
Murder in Abbot's Folly by Amy Myers
Behind Japanese Lines by Ray C. Hunt, Bernard Norling
A Fox Inside by David Stacton
Our partner