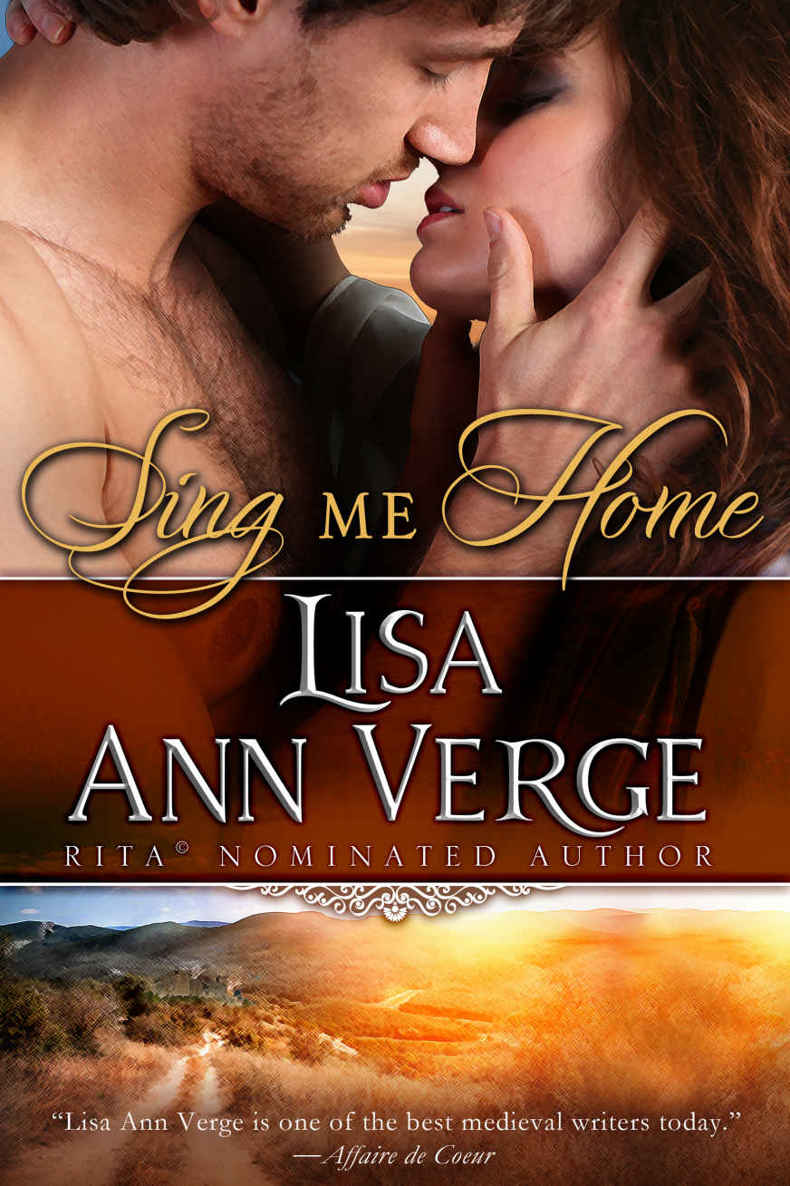 Blessed with an angel’s voice, Maura of Killeigh escapes from a convent determined to join a band of traveling players. They’ll be her protection on the roads while she searches for the parents who abandoned her at birth. But once face-to-face with the seductive, sinfully handsome vagabond who rules the troupe, Maura wonders if she wouldn’t be safer traveling alone.

Nothing but a hanging awaits Colin MacEgan at the end of his journey, but that doesn’t stop him from welcoming the lovely Maura into his merry band of minstrels. He needs her golden voice as entry into the noble house of the man he’s oath-bound to kill.

But strong, wild-hearted Maura is the kind of woman this jaded warrior-poet has never known—a confident dreamer who believes in happy endings. He vows to keep the songstress safe … but can he protect her from himself?

“[Sing Me Home] is proof that people can change, one man can make a difference, and that romance novels can be funny, and lusty, and still cross into deeper territory.”

“I love Ms. Verge’s style. She scatters her puzzle pieces, then fits them into the most unlikely places. This one left me soaring.”

“Lisa Ann Verge is one of the best medieval writers today.”

Killeigh, Ireland, the Year of Our Lord 1307

W
hen Maura finally found the man she was looking for, he was stretched across a woman’s lap, his fingers lost in her cleavage.

She stumbled to a full stop outside the campsite, still hidden in the trees, and tightened her grip on the basket slung across her shoulder. She felt as if she’d just come upon the sort of scene painted in the pages of the Abbess’s Bible, full of wild-eyed demons and half-dressed women and long-tongued satyrs dancing around a woodland fire.

Summoning her convent-training, she muttered a quick Hail Mary and then an Our Father. When she finished, she took a breath so deep that she felt her surcoat tighten across her breasts. Certainly the great wide world and all the people in it couldn’t be as dangerous or wicked as the Abbess insisted.

She reminded herself that these people were simply performers, just traveling minstrels. The piper was playing the same reedy lilt that he’d played this morning. Another man was sucking on a bladder of ale, but in the village that same man had performed magic tricks that delighted the children. And the person she’d come looking for—the man now reclining on a woman’s lap—she’d last seen him laughing as he wrestled with the baker’s son while another minstrel took wagers.

She gave herself a good shake. It was too late to turn back. She hadn’t escaped the convent only to lose courage now.

She marched forward into the campsite. Swiping her skirt away from the flames, Maura rounded the campfire and stopped in front of the wrestler and his lover. As the man turned his head on its bed of fleshy breast, she tried not to notice that he looked like the very image of lustful sloth, sprawled out on the ground like that, his shirt untied so that the light gleamed on his chest.

He asked, “What have we here?”

The wrestler had a husky voice, as rough as she imagined his ill-shaven cheek would be. “My name is Maura,” she said, startled by the odd thought. “I have some business with you tonight.”

The piper’s music squealed to a stop. The juggler’s knives clattered to the ground. The wrestler stopped twiddling with his paramour’s hair.

“Oh, I’m sure he
does
know you,” someone interjected. “There isn’t many an Irish flower our Colin hasn’t plucked.”

“Aye,” another man shouted, “I’d say there isn’t a girl from here to Wexford that Colin hasn’t deflowered. Tell us, lass, should we be worried about a father or a husband waiting in the woods?”

“I have neither father nor husband,” she said, rattled by the sudden attention. “And I’ve never seen you all before you arrived today.”

“Leave the girl be.” The wrestler called Colin glowered at the gathering men. “Have you no eyes? This one’s coif is as white as snow.”

Maura’s hand drifted to the ties of her linen coif, still tight under her chin, which she wore to tame, somewhat, the wild curls of her pale brown hair.

“Ignore the ravings of these jesters,” Colin said, drawing her attention. “They make fools of good men for their living, and don’t know better when to hold their tongues.” He gazed at her through half-lidded eyes that held the flicker of flames. “Still, it must be a dangerous sort of business that would bring a young woman to our camp, alone, after dark.”

“Not dangerous,” she said. “I want to join your troupe.”

Amid the minstrels’ surprised muttering, the man called Colin raised his strong, black brows. Easing off his paramour’s lap, he found his feet and unfurled to his full height. She arched her neck to look up at him, which was a rare thing, for she stood a half-head taller than most of the men in the village and all the brothers in the nearby monastery. But it was more than his height that made her suddenly catch her breath. His pitch-black hair was tugged back by the ragged end of a bootlace. A single lock fell from his brow to brush his jaw. She had an odd, powerful urge to sweep it behind his ear.

The angel Lucifer was said to be beautiful, too.

Stop.
She squeezed her eyes shut and said another silent Our Father. She promised to do two more Hail Marys before bed.

“So,” he prompted,as little crinkles sprouted at the corners of his eyes, “you say you want to join our troupe?”

“I do.” She hated the tremor in her voice.

“Do you have any experience, lass?”

The other minstrels tittered but she ignored them. “I’ve never been a traveling performer before, if that’s what you’re asking.”

“Then how do you plan to earn your keep?”

His half-smile widened, showing a glint of teeth. He spread his hands in welcome as the minstrels crowded around.

Maura shifted her shoulder. The leather strap of a woven basket slid down to her elbow. She thrust her hand into the narrow opening and curled her fingers around the hunk of fur hiding within. She lifted her pet into the light. Nutmeg swiped his face with his little paws as he blinked his eyes open. She pressed her cheek against his soft gray fur, murmuring nonsense as she dragged a jingling length of bells out of her sack. She slipped the opening over his head. He chirred and blinked up at her.

“You have a performing squirrel.” Colin rubbed his bristled jaw as if to hide a smile.

“His name is Nutmeg.”

He’d been her pet for years now. The Lady Sabine, a laywoman at the convent, had bought the squirrel from a traveling performer, and then gifted the pet to Maura when Lady Sabine realized the squirrel was chewing away at the bedposts. The squirrel, oddly, only understood French.

Maura placed Nutmeg on the ground, and then, palming an acorn from a food sack hanging from her belt, she lifted it to get the squirrel’s attention. When she gave the command,
debout!
he stretched up on his hind legs and tottered, upright, in a small circle. With another command,
danse,
he hopped from one back paw to the other in an awkward sort of jig. With a loop of the leash he began to chase his tail, faster and faster and faster until he was a blur of gray fur. With a final tug of the jingling leash, he crouched down, shook his head as if he were dizzy, and then rolled over to play dead.

She waited an awkward moment for applause that didn’t come. Then she tugged Nutmeg up so he would bob his head, as if he were bowing. She curtsied, as well. When she looked up, the troupe was still watching … waiting.

“He does more than dance,” she said into the thickening silence. “He can roll a small barrel and ride on my head. And he has some other talents.” She crouched down to remove Nutmeg’s leash, and then she pointed at Colin. “Nutmeg,
Vas-y.”

The squirrel raced towards Colin and clambered up the minstrel’s hose. Colin’s paramour squealed, then scuttled back as Nutmeg poked his head in the sack hanging from Colin’s belt.

“This could be a very dangerous trick,” Colin said, grinning at the bundle moving in the sack.

The squirrel popped his head out of the pocket. In a flash he climbed down Colin’s hose and scampered to Maura’s side. The squirrel deposited a copper at Maura’s feet and stared up at her with a twitching black nose.

Maura pinched up the coin. “Good pay for Nutmeg’s performance,” she said. “I thank you for it.”

She popped the copper in her bag and eyed the man Colin in challenge, feeling a little tremor in her belly as the handsome wrestler eyed her back. As the moments passed and he said nothing, she wondered if her sleeve-laces were untied, if the night had frizzed her hair like it usually did, if the curls were at all contained beneath the white linen of her coif.

Then Colin’s paramour sidled up beside him. The woman pressed her breast against his arm. Maura glanced at her, noting the brazen red hair, bright eyes, dark lips, and flushed cheeks. And suddenly, in her dull brown surcoat and common little coif, she felt as colorless and plain as the birds that pecked for crumbs outside the convent’s kitchen doors.

“Enough of this foolishness,” the woman said. “You’ve had your fun, Colin. Now tell this girl to go back to the convent where she belongs.”

Staccato shouts of alarm stuttered through the campsite, as if the minstrels had all been doused with holy water.

“She’s likely to get you all hanged,” the woman continued. “If she’s found here, they’ll say you abducted a nun.”

“She hasn’t taken vows,” Colin mused. “Too much lovely hair spilling out over her shoulders.”

“Looks to me like a fine, warm abbess,” one of the men barked, eliciting a round of chuckles.

“She does have the look of an angel,” Colin said, “descended among us to wash us free of sin.”

“Huh,” Maura barked, “and thus dirty the waters of the Shannon?”

She winced at her own words. She was supposed to be gracious and subservient. After all, she was here to ask a favor. But they stared at her like so many crows, and that made her nervous, and when she was nervous she got prickly, even when she knew better.

But the man called Colin only laughed, a sound that sent a not-completely-unpleasant tingle shooting up her spine.

“I recognize that laugh,” a voice bellowed from a nearby tent. “Colin, what poor girl are you leading astray now?”

Maura turned to encounter the roundest man she’d ever seen. Waddling out of the tent, he pinched the bone of some roasted animal between his thumb and forefinger. His black-eyed gaze assessed her as he approached.